It was yet another brilliant, bright and sunny day, there was still a very cold breeze but the sunshine prevailed to make it an enjoyable day. Dawn and I were up and out by 8am as we headed towards the coast at Lyme Regis, we decided to stop off at Lambert’s Castle to try to get a better view of the Common Redstart that we saw the other day. 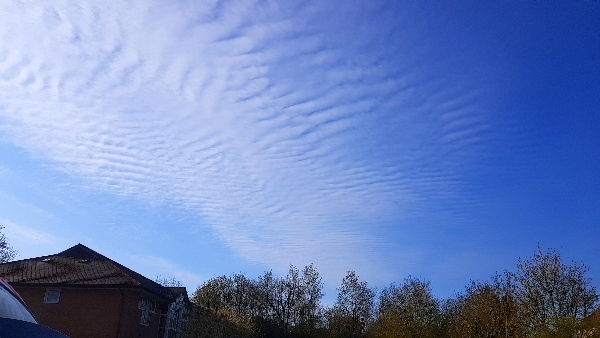 We spent an hour or so walking around the large orchard meadows looking and listening for the Redstart. A Mistle Thrush sang loudly, as did Song Thrush, Chaffinch, Chiffchaff and Robins. We also found a male Yellowhammer and then we heard a Siskin calling, two of them flew over us and landed in a the top of a silver birch tree. The male was displaying and flew from the tree several times making a circular display flight with his tail spread and his wings fluttering. 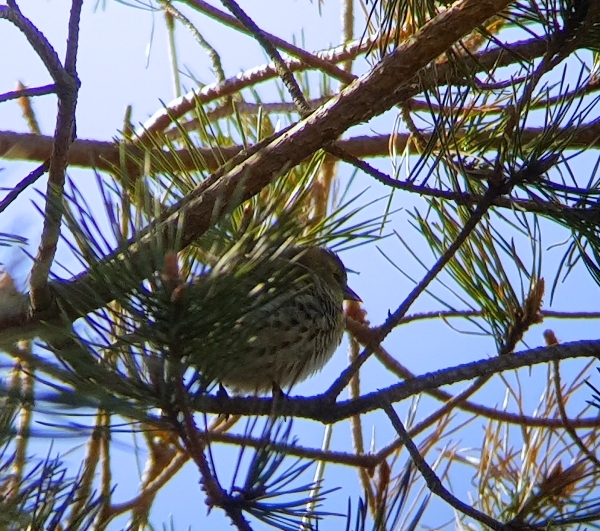 a poor shot of a female Siskin 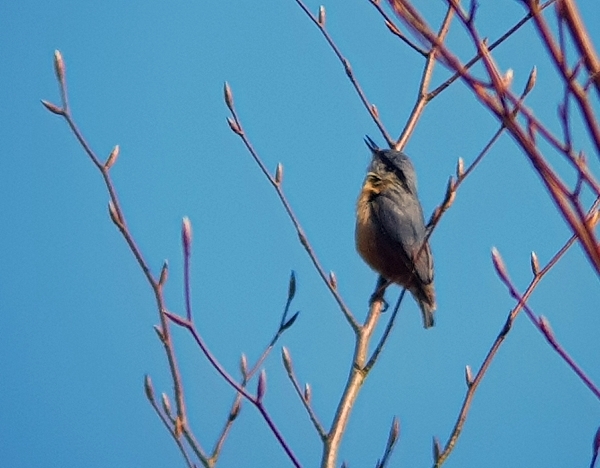 and a worse shot of a Eurasian Nuthatch

I couldn’t get a shot of the male Siskin, he was far too busy trrying to impress his girl friend, but I snapped a few shots of her. Then a male Nuthatch started calling from the top of another tree, he was quite distant, but I took some record shots anyway.

From Lambert’s Castle we drove to Uplyme where we parked the car and set off on foot for the 1 ½ mile walk along the River Lim into Lyme Regis. It was a wonderful walk, lots to see and lots to hear. We had five or six sightings of Dipper, two of which were of the bird settled on rocks in the river. As I didn’t take my scope with me I could only take pictures through my binoculars!! So all the pictures shown below are digi-binned using my phone held against the lens of the binoculars. 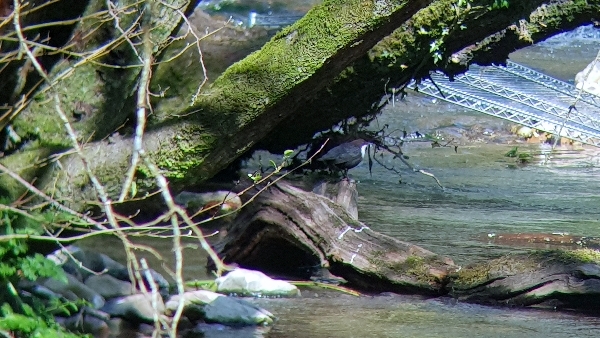 We also saw Grey Wagtails, Chiffchaffs and Willow Warblers. Blackcaps were singing but we never saw one. A few butterflies were on the wing and many wild flowers were on show. Whilst I was taking pictures of Yellow Rattle flowers Dawn pointed out an Orange-tip Butterfly, it was a male, settled on a large leaf, I quickly shot off a few pictures of it. We also saw Brimstone, Large White and Peacock Butterflies. 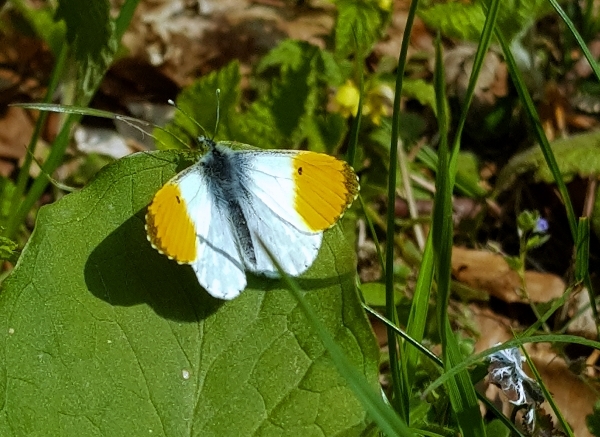 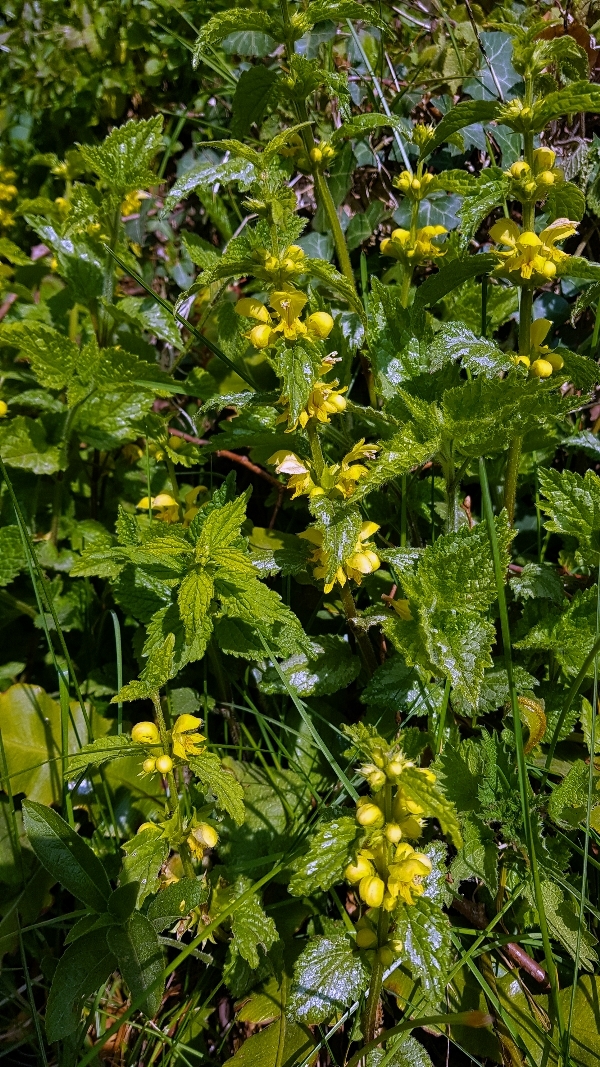 Once we got to the coast we walked to famous Cobb, an ancient breakwater where a flock of Purple Sandpipers over-winter every year. Along the way I saw the over-wintering Eider Duck in the harbour and a group of 17 Ruddy Turnstones on a jetty. On the man-made breakwater extension of the Cobb I saw at least three Purple Sandpipers, unfortunately they were all asleep and quite distant. 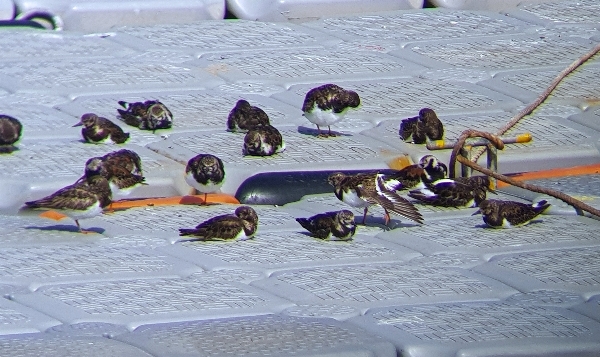 some of the Ruddy Turnstones roosting on a man-made jetty

Also on the Cobb I saw Rock Pipit, Great Cormorant, Herring and Great Black-backed Gulls. After a short while we walked back to the River Lim and to our favourite fish and chip shop!! We sat and ate our lunch by the side of the river in lovely sunshine, it doesn’t get much better than that. 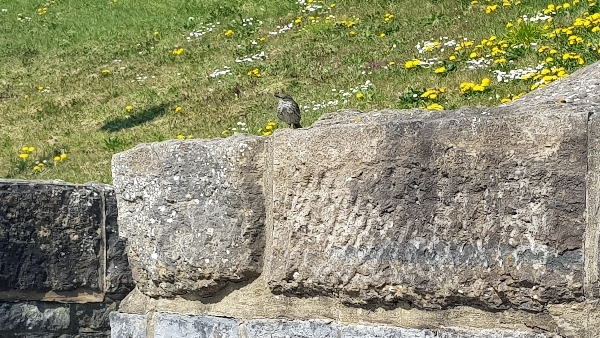 Our walk back was as good as the outward journey with plenty of sightings and lots to see, we got back to the car at 2:30pm and set off for home. We made a stop off in Crewkerne to visit my favourite Mother-in-Law before we went home. 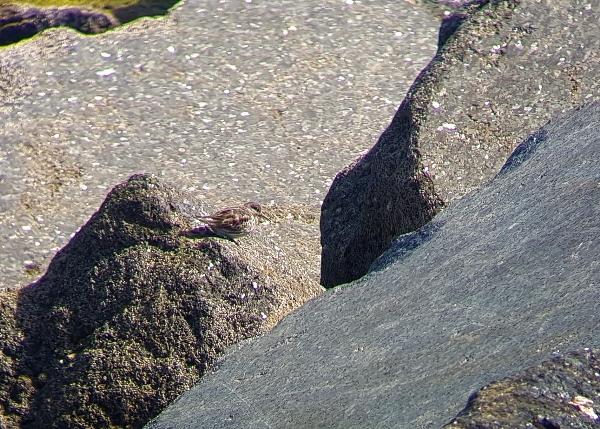 The garden birds provided some entertainment, I saw not only Robin fledglings but also Blackbird chicks that had just left the nest!! A Coal Tit once again came to bathe in our bird-bath and Fez showed up for his daily feed. In the meadow I saw four other Pheasants, two Red-legged Partridges and a bunch of Jackdaws. 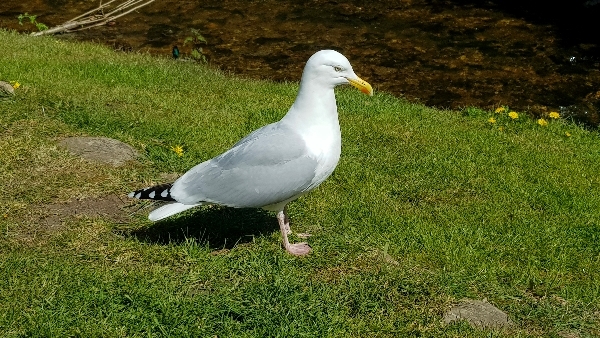 this Herring Gull joined us for our lunch, but he went away with an empty stomach (we do not feed gulls)

There was 5 species that came to collect food from our lawn, Blackbird, Song Thrush, Dunnock, Robin and House Sparrow and of course Fez the Pheasant.