After yesterday’s wet and miserable weather it was nice to see the sun shining once again this morning. I attempted to get up early for a visit to Lydlinch Common, but that never happened. I put my back out a couple of days ago and yesterday it was impossible to do anything, this morning wasn’t too bad, but I took it easy.

My annual visit to Lydlinch Common at the end of April is made to look for Common Nightingales, it is only 12 miles from home and easy to get to. I left home at 8:30 and got there before 9am. The traffic round the Common was particularly noisy at that time of the day, two roads border the area and they were both quite busy.

Nevertheless, once I had walked into the scrub the traffic noise was a little less conspicuous and I could hear a few species in song. The Common is primarily a Butterfly Reserve managed by the Dorset Wildlife Trust especially for Marsh Fritillary, many other butterflies can be found there and quite a few orchids too. There are wide gldes cut through the blackthorn scrub, there are dense clumps of bramble, areas thick with silver birch saplings,also hawthorn, hazel and there is a mature woodland of oak, ash, sycamore and beech. 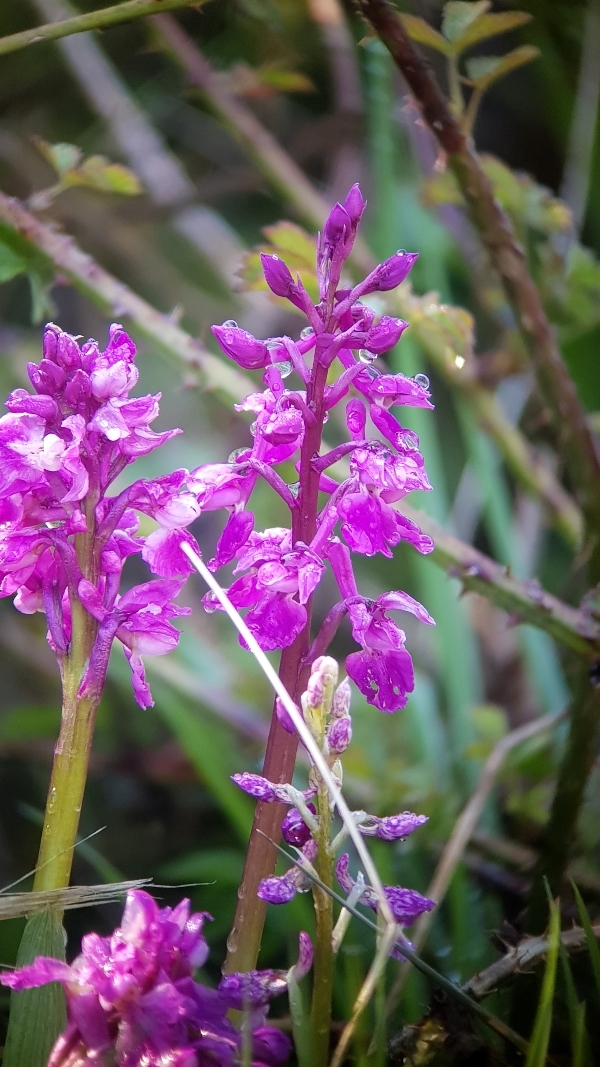 I think this is an Early Purple Orchid?

As soon as I entered the reserve I heard Chiffchaff, Blackcap and Garden Warbler as well as Robin, Song Thrush, Blackbird and Wren. It wasn’t until I well into the scrub area that I heard the first of four Nightingales, I couldn’t find this one so I moved on. Over the next hour I located another three singing Nightingales, none of which would show for me.

I also heard the distinctive trill of the Lesser Whitethroat song, I tracked this bird down and got several short views of it. At last I saw a Nightingale, but it was a view of one flitting across a ride from one hedge to another and that was it. I also found a couple of clumps of orchids, I think that they are Early Purple Orchids, but if you think differently then let me know. 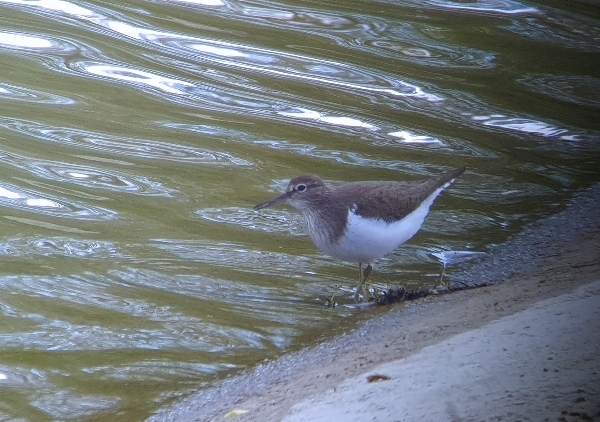 got back home by 10:30am, just after lunch I dashed across to Sutton Bingham Reservoir to look for a yellow Wagtail that had been seen. I never saw the Wagtail but I had good views of a Common Sandpiper and there must have over 1000 Herring Gulls milling about. I sifted through the gulls looking for a white-winger without luck. I did see G BB & L BB Gulls as well as Black-headed Gull, Mallard, Great Crested Grebe and a Moorhen. 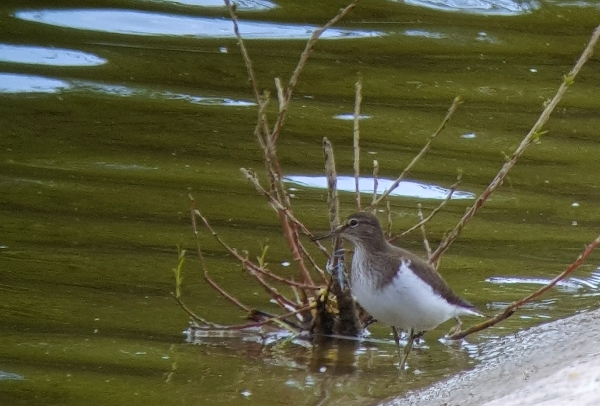 Dawn and I went out for an afternoon walk on West Moor, this area is a great birding location, but because we left it late in the day to visit I thought that we would see very much. 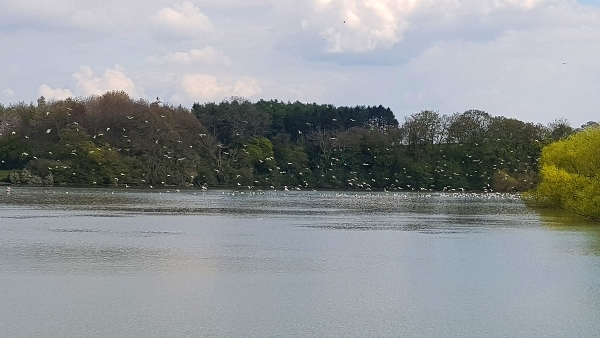 I was pleasantly surprised with the number of birds on show at West Moor, we arrived at 3pm and stayed until 5pm, it was cloudy with broken sunshine and a chilly breeze. We saw very little until we reach a small copse of willow trees half-way along the ‘drain’ we were walking besides. 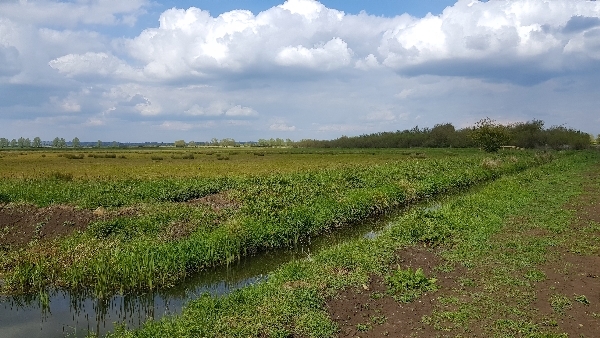 the track alongside the 'drain' at West Moor, you can see the small copse ahead on the left

A pair of Reed Buntings flitted around feeding in the new leaves of the willows we then heard a SEDGE WARBLER 9my first of the year), the warbler showed on and off a few times, but it would not keep still enough for me to takes its picture. 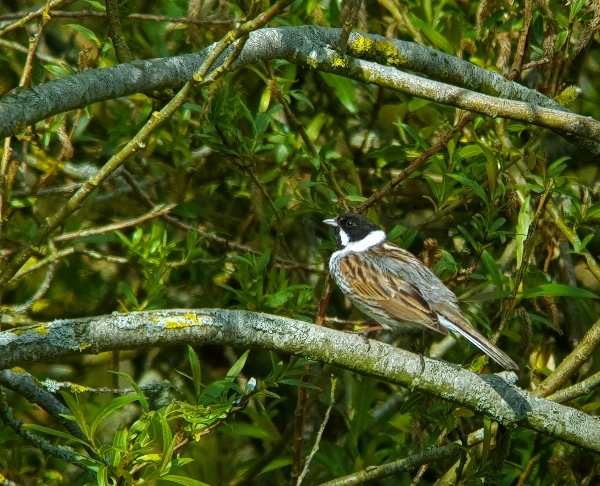 Dawn then spotted a bird right At the top of a dead tree a few meters ahead of us, it was my m ain target species, a YELLOW WAGTAIL, a beautiful male, what a stunning bird. That one went in the can straight away. We also saw Blackcaps, Long-tailed Tits and Dawn found another ‘goody’ when she pointed out a LESSER WHITETHROAT, my second of the day and new for the year. The L Whitethroat did not hang about and flew off high to the north. 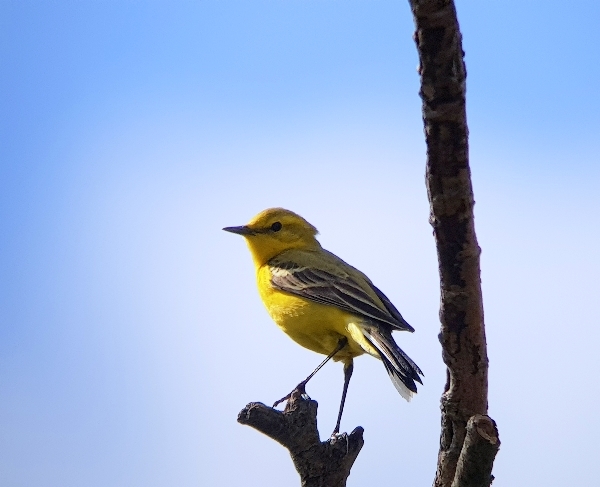 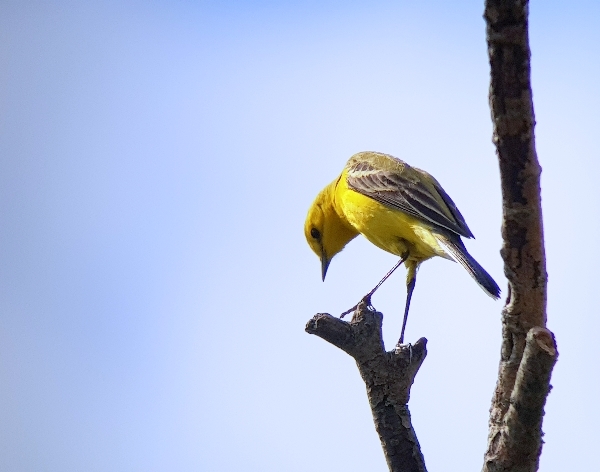 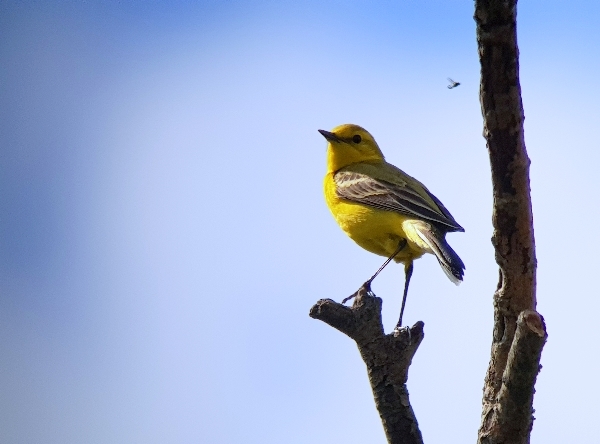 The next bird was unexpected when we found a WHINCHAT on a fence post, it was female in beautiful spring plumage, a cracking bird is the Whinchat. We then spotted a HOBBY dashing about over the moor to our left and over the next hundred meters we had many more sightings of Yellow Wagtails, we saw seven males together in one small area, they had obviously just arrived and the pecking order was being decided with lots of chasing going on. 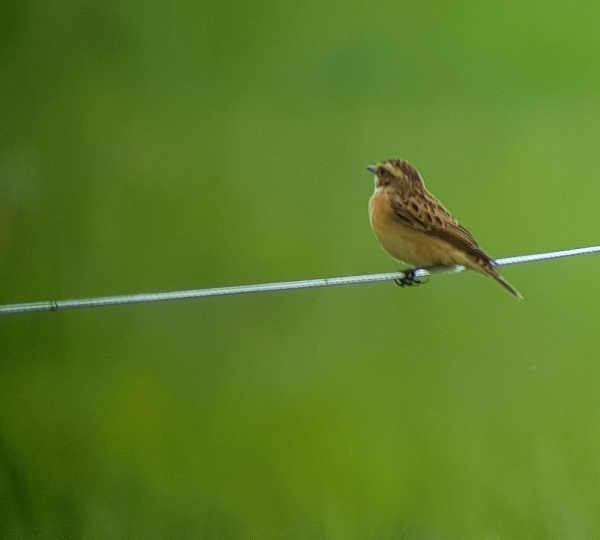 Scanning the area on both sides of the ‘drain’ we picked out Great Egret, Canada Goose, Mute Swan, Grey Heron, Skylark, Great Cormorant, Rooks, Crows, Jackdaws and we heard a Cuckoo twice. We searched for Common Cranes btu couldn’t find any at all. 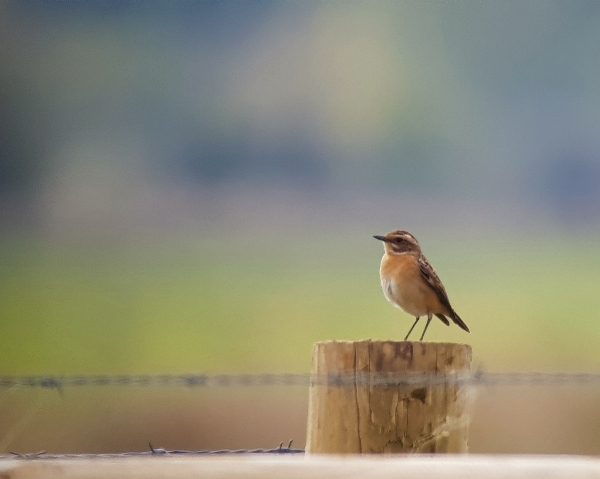 After walking out onto the moor for about a mile we turned around and headed back. Our return walk was just as interesting with more sightings of most of the birds seen on the way down, we added Blackcaps and Chiffchaff but we never a Willow Warbler or a garden Warbler. We find a Common Kestrel, a distant Common Buzzard and we saw several Roe Deer, I thought I glimpsed a Dragonfly as it zipped past me but I never got a second chance to confirm that. 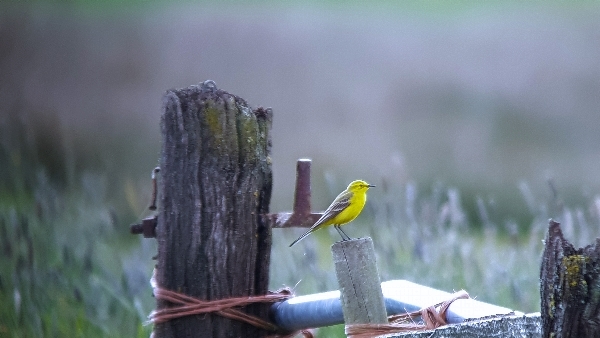 another shot of the Yellow Wagtail, the males are just stunning

We were back home at 5:30pm and yet another message came through on our local WhatsApp Group, a report of an Osprey at Sutton Bingham. I think Guy Campbell dashed out loo, for it but the bird had gone off to roost. I haven’t seen a single Osprey this year, that was the fifth passing through Sutton Bingham this year, you always be in te right place at the right time.