I never planned to go out today but Guy Campbell called and said he wanted to visit Cogden Beach for a better view of the TAWNY PIPIT which be both saw yesterday. We both also wanted to have a session of Sea-Watching to try to see Skuas etc.

Guy picked me up at 2pm and we arrived at Cogden some 50 minutes later, it was very windy all along the coast, an onshore wind was quite chilly. We walked along the shore using the path through the scrub walking on grass and muddy paths. We saw Common Whitethroat, Linnet, Stonechat, Robin and Dunnock, we also heard Cetti’s Warbler and Lesser Whitethroat.

The Pipit was easy to locate as a couple of other birders where already there watching it, it was on the beach much nearer to the car park than it was yesterday. We had great views of it and spent about 30 minutes taking pictures, however, despite the bird being much closer this time there was still a heat shimmer and the bird was constantly moving. 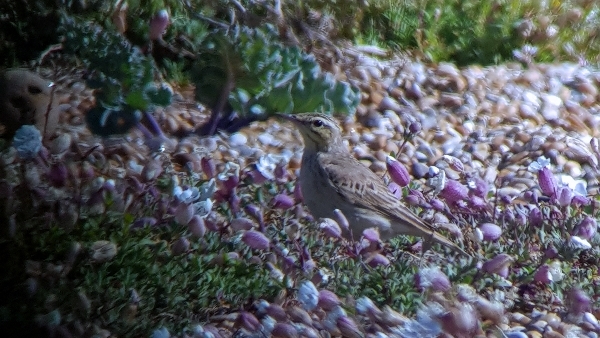 We then walked over the pebble bank to face the sea, we sat down on some rocks and set up our scopes to sea-watch for a while. It was very quiet out there, we saw Fulmar, a few unidentified auks, a few Sandwich Terns and six Manx Shearwaters. All of these birds were quite far out and were moving quickly. Other species seen were: Black-headed, Great Black-backed and Herring Gulls and a couple of Cormorants flew over as we were leaving, Guy also spotted a wader flying along the beach, we both thought that it was a Ringed Plover. 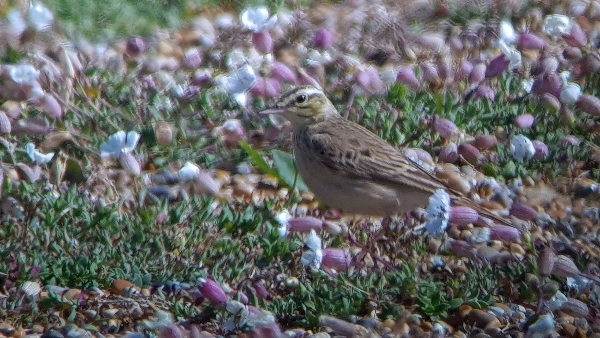 On the way back to the car we stopped to look for Lesser Whitethroat, we had glimpses of a couple but none of them sat out posing for pictures. Before we got back to the car we saw a couple of  Willow/Chiffs (unidentified warblers which were either Willow Warblers or Chiffchaffs). 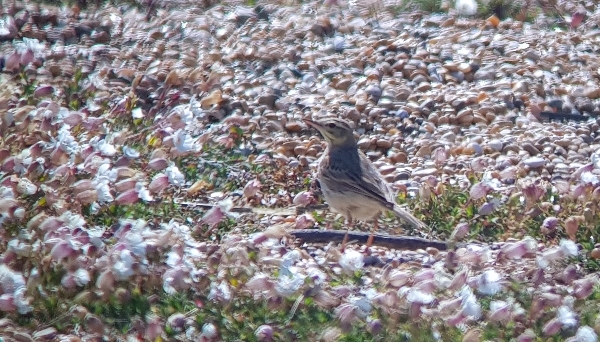 We were home  by 5:30pm it had been a successful outing even though we never saw much out at sea.