A VISIT TO BENTLEY WOOD, NEAR SALIBURY, WILTSHIRE

For a change I went out looking for butterflies instead of birds, my butterfly-pal from Yeovil, Guy Campbell picked me up at 8:30am and we drove to Bently Woods, West Dean, near Salibury. In the meantime Dawn drove our car to a friend’s house just south of Salisbury where we were to meet up later.

We drove through heavy rain and we both thought that we were making a big mistake looking for butterflies in the rain, however, by the time we reached the car park at Bentley Woods we had broken sunshine and we were quite sheltered from the wind. The area where our main target butterfly, the Pearl-bordered Fritillary, was just a 100 meters from the car park. As we got out of the car a chorus of bird song hit us,  Chaffinch, Blackbird, Song & Mistle Thrush, Blackcap, Garden Warbler and Chiffchaff could all be heard. 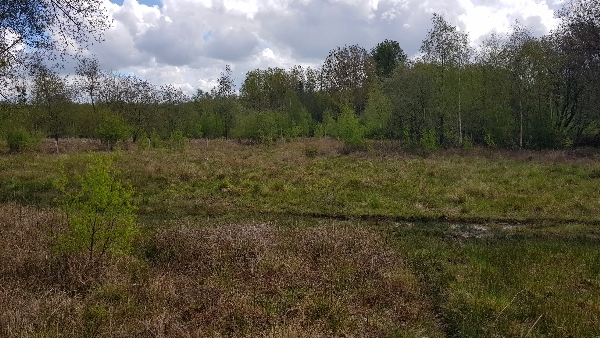 the open woodland managed for the Fritillary

The woodland clearing was the prime habitat for the Pearl, it was well managed with short vegetation. Dog Violets, the host plants of the butterfly, were growing in abundance along with bluebells, bugle, ground ivy, primroses and speedwell. Guy and I searched for about half an hour without any luck, in fact we never saw single butterfly. The sun came out for longer spells around 11am which increased our expectations. A couple of Brimstone took to the wing and I also saw a Green-veined White our ethusiasm was renewed. 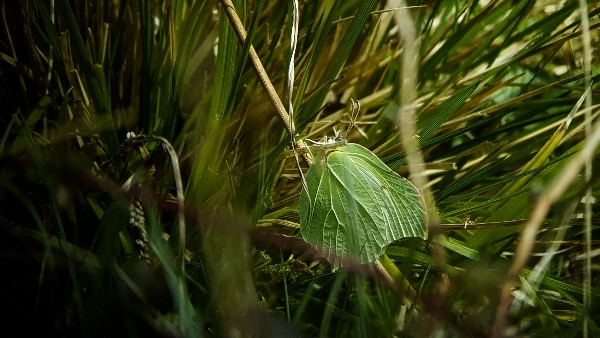 the cryptic camouflage of the Brimstone, it has a leaf colour and has leaf-shaped wings for disguise

Two or three other guys were searching for the Pearl and suddenly one of them waved over to us, he had one in his camera. We walked over and sure enough there was the hard-to-find specimen. It took off and kept low to the ground but its fast and erratic flight pattern was very hard to follow, we lost it. 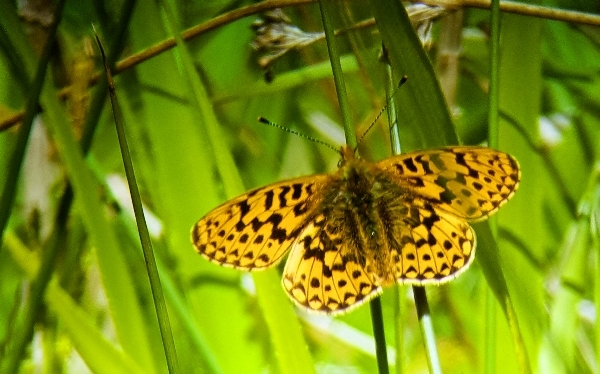 my first and rushed attempt to photograph the Pearl-bordered Fritillary

With the concerted effort of 5 of us we relocated the Pearl several times and eventually we found two others. Finally we had one that settled for a prolonged spell and we all took our pictures. 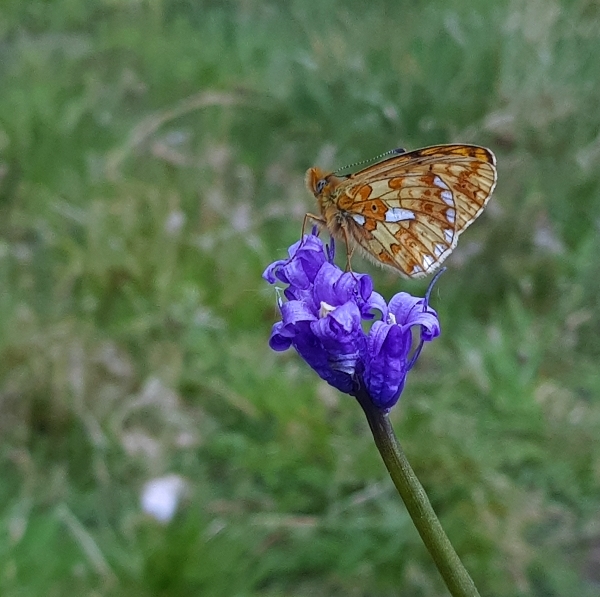 The Pearl on a bluebell, you easily see the 'string' of pearls on its underwing 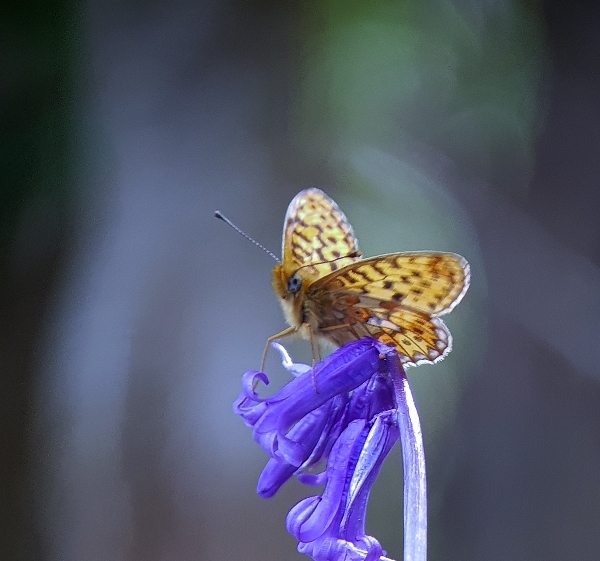 We were well made up as we walked back to the car around 12:30pm, we cracked open our sandwich boxes and poured hot coffee from our flasks. In the car park we heard more birds including Marsh Tit and by 1pm we were on our way back. No five minutes into the journey along a country lane near West Dean Village a HAWFINCH flew up from the side of the road! OMG, a Hawfinch, the distinctive tail and wing markings were unmistakable we both shouted Hawfinch at the same time! We stopped the car and got out for a quick search, it was very windy, the trees were waving all over the place and we never got a second glimpse of it. 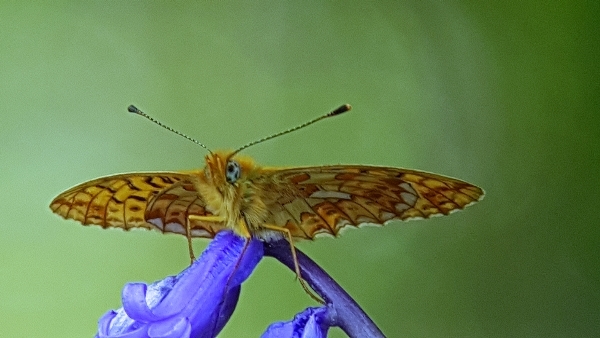 Guy dropped me off at my friend’s house near Salisbury, we sat on the terrace in the sunshine for a while when two Red Kites came over, another year tick for Guy. He left shortly afterwards and Dawn and I stayed for the rest of the afternoon and evening.

I took a walk later and spent an hour in their garden, I added Orange-tip and Small White butterflies to the day count and later I saw a Sparrowhawk displaying over a nearby woodland. 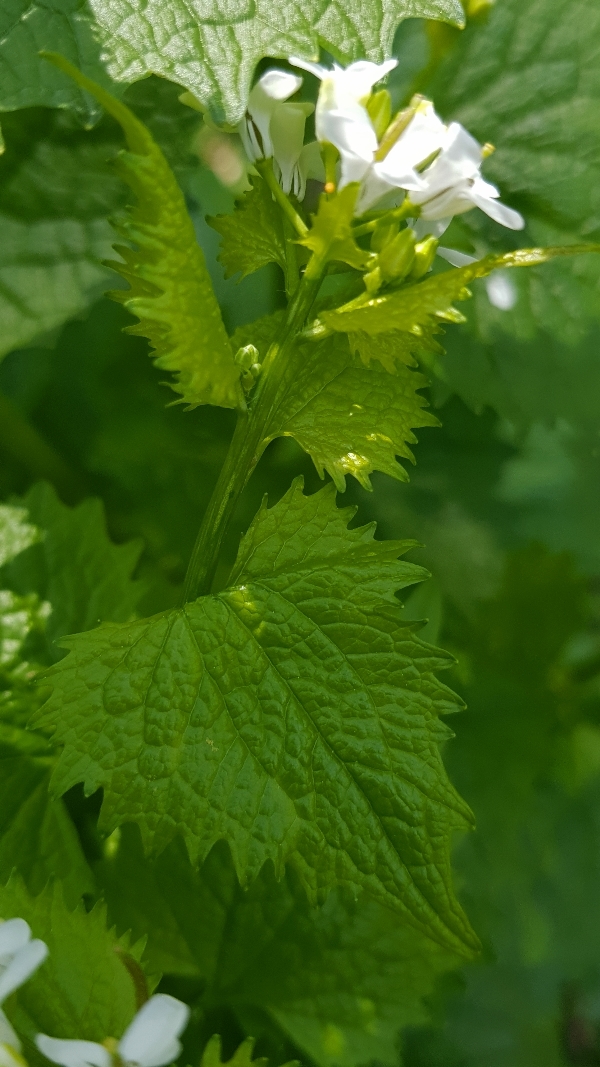