ALL DAY VISIT TO THE FOREST OF DEAN

WEATHER: dull and overcast to start, quite cold, much brighter in the afternoon. Temp 8 – 14C

We had an epic day today!  Dawn and I got up early and drove to Chepstow to collect Nigel, we all then drove to RSPB Nagshead Reserve in the Forest of Dean. The F of D is a huge geographical, historical and cultural region in western Gloucestershire. The area’s most prominent characteristic is the 110 square kilometers of mixed woodland, one of the best surviving ancient woodlands in the UK.

The RSPB reserve at Nagshead covers some 1250 acres of mixed woodland, predominantly Oak, Beech, Chestnut and Pine. Since 1942 a nest box scheme has been in operation, ideally for Pied Flycatchers, but also Common Redstarts, both of these birds were our main target species for our visit. 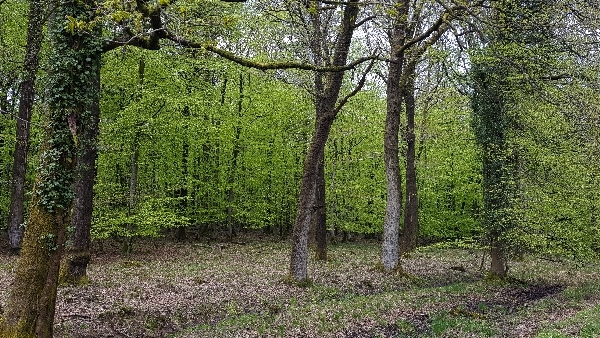 Beech Woodlands at Nagshead are beautiful in the spring

We arrived just before 9am and met Kevin & Pat Jones in the car park, they had driven down from Leominster (pronounced Lemster). Nigel led the group as we all set off on a circular walk through the woodland, it was cold, misty and wet underfoot. It took a while before we found our first PIED FLYCATCHER. It was because of the excellent nest-box scheme in place at Nagshead that we found this beautiful black and white gem. 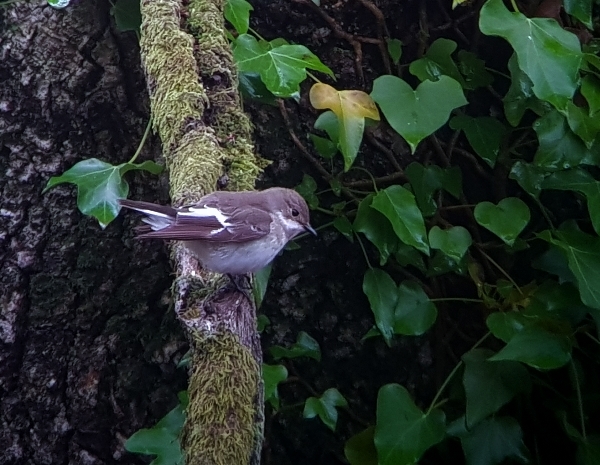 Kevin was excellent at finding the bird and relocating it when it flew off, to my surprise it was keeping very low in the forest and often flew onto the ground. We watched the bird visit a nest box and a few seconds later a female flew out of the box. She gave us much better views and the opportunity to take some pictures. 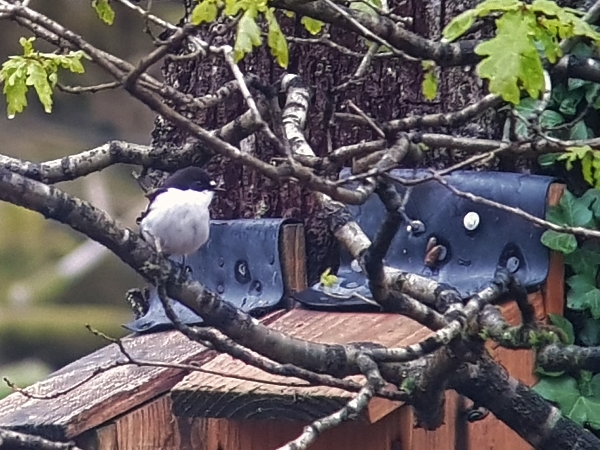 a male PIed Flycatcher sitting above a couple of nest boxes

A pair of Treecreepers distracted us for a while as did a few Nuthatches, again we saw the latter feeding on the ground which was just as unexpected. Many birds were singing despite the dismal weather, we could hear Song Thrushes, Blackbirds, Chaffinches, Chiffchaffs, Blackcaps, Robins Wrens and Dunnocks. 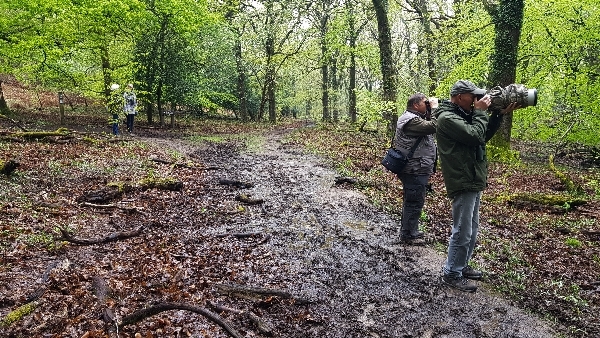 on the trail at Nagshead, Kevin with his camera and Nigel hiding behind him

The pathway led us to a more open area near a pool of water where a strategically placed hide was found (t was closed of course), we watched the open woodland from the pathway for a while until Kevin found a male Common Redstart. Once again this bird was feeding very low to the ground and often flew down into the leaf litter. It was a stunning bird, but it failed to come anywhere near us and we only got very poor record shots of it. 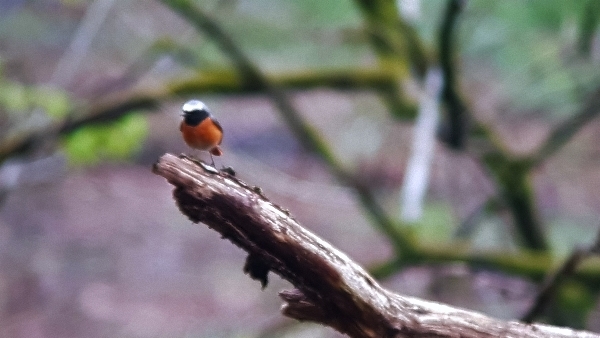 a very poor record shot of the male Common Redstart, it would not come any nearer I'm afraid

Back at the cars we had a hot drink and a slice of one of Dawn’s special cakes, yum, yum! Nigel then directed us to two sites in Parkend village where, at other times of the year, were great places to look for Hawfinches. 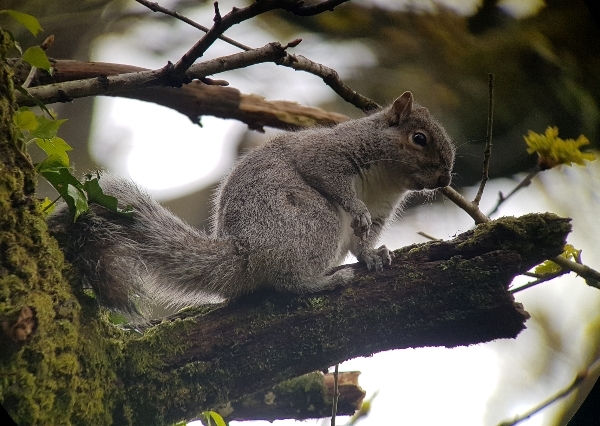 The forest is full of Grey Squirrels, they are everywhere, this one appears to disilke having his picture taken because as shown below he lifts his leg blows us a fart!! 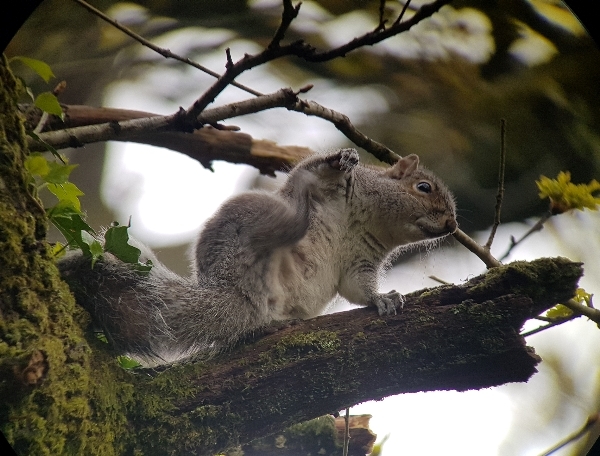 For our afternoon birding Nigel took us to Crabtree Hill, another area of the Forest which had vast areas of open heath and where a different suite of birds could be found. Once there we ate our picnic lunch before we set off for a long walk into this new area. The first part of our walk was alongside some mature fir trees, it was a place where Firecrests were known to breed, so we searched for them. After 15 minutes we heard a Firecrest and before long one appeared in the bushes and scrub on the edge of the fir wood, it came fairly close and Kevin got some wonderful pictures of it even though it would not keep still!! 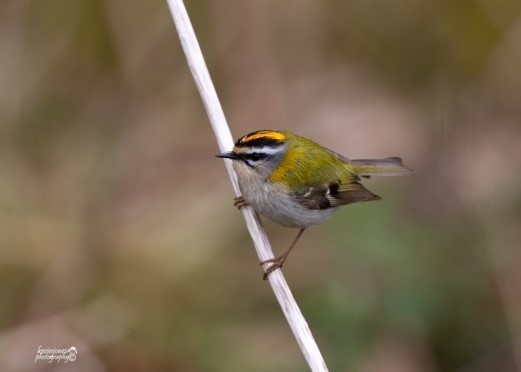 this is Kevin at his best, he is so quick getting onto a bird and to fire off a few pictures 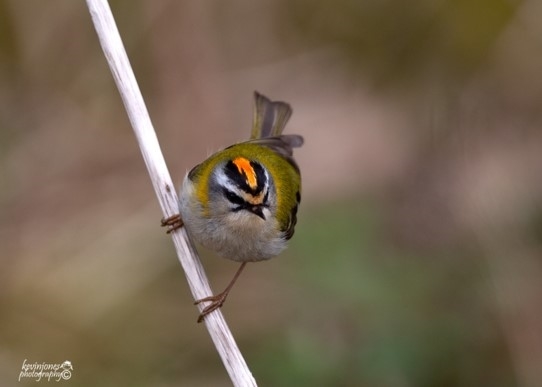 just look at the fire in the crest of this little beauty, by Kevin Jones

Our main target birds were Tree Pipit and Woodlark and perhaps better views of Common Redstart, but our first birds included Common Buzzards and a couple of Common Crossbills. Not long after, we heard a Tree Pipit and eventually found it in a tree! Ha, what did you expect? 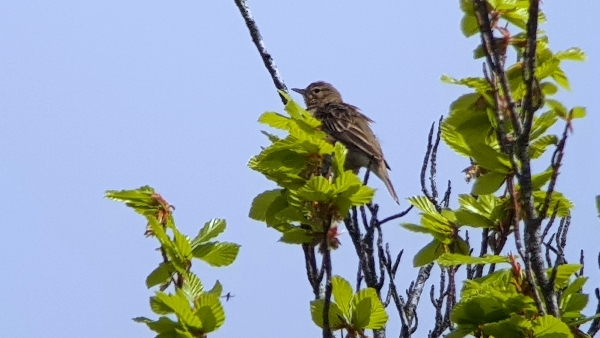 We also found Common Whitethroat, Garden Warbler, Blackcap, a Willow Warbler, some Linnets and Goldfinches. We talked to a couple of birders who told us that they had seen WOOD WARBLERS  about a mile along the main track, they gave us rough directions to follow, so off we went. 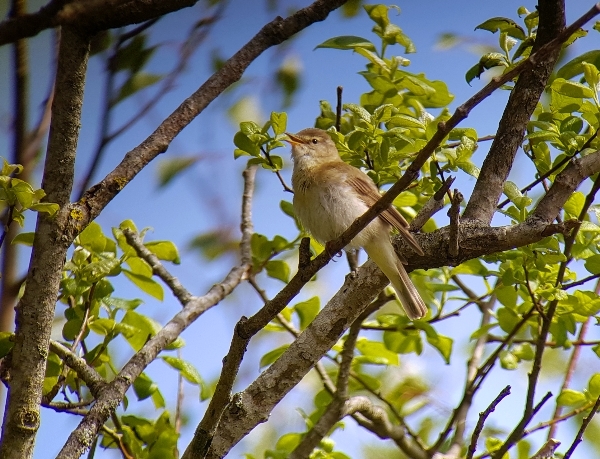 We saw Coal Tit, Nuthatch, Blue & Great Tit, Wren, Dunnock, Song Thrush and another Willow Warbler as we progressed along the path. At the area where we directed to we heard a WOOD WARBLER singing. So we waited, a second bird sang from the other side of the track, we thought that these two birds were both keeping territories and it wasn’t long before one of them came within view. 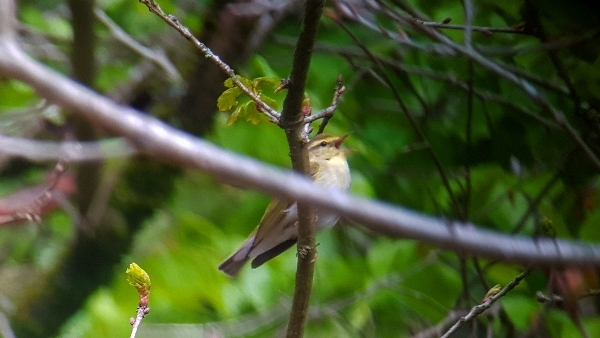 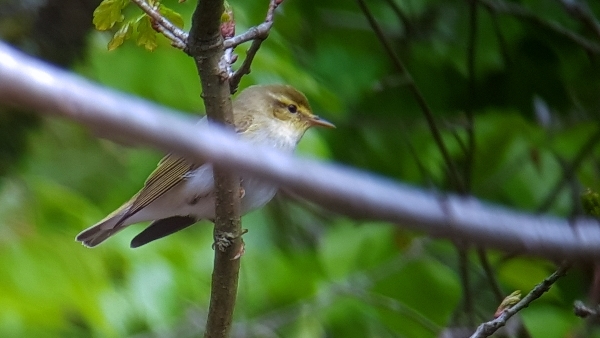 It was marvellous to see this, now rare, woodland species, I hadn’t seen one in the UK for many years, it was a joy to see and hear it. Both Kevin and I got pictures of it. The sun came out and cheered us all up as we began our walk back. 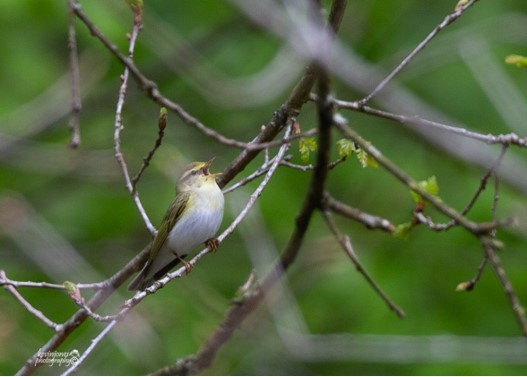 this is Kev's picture of the Wood Warbler, right out in the open, smashing

During the return journey we all had excellent views of Garden Warbler and a Willow Warbler sat right out singing to us, we also heard a second Firecrest but only got a fleeting glimpse of it.

After another cup of hot coffee and another piece of cake, we visited a site where it was possible to find Dippers if the water levels were right. Nigel directed us to Cannop Brook and Pools, the outflow of the pools ran into the brook but the water level was much too high for Dippers after the recent torrential rains. We did see Grey Wagtail and some ducks and geese on the pool, a Coal Tit was one of our last sightings just before we called it a day. 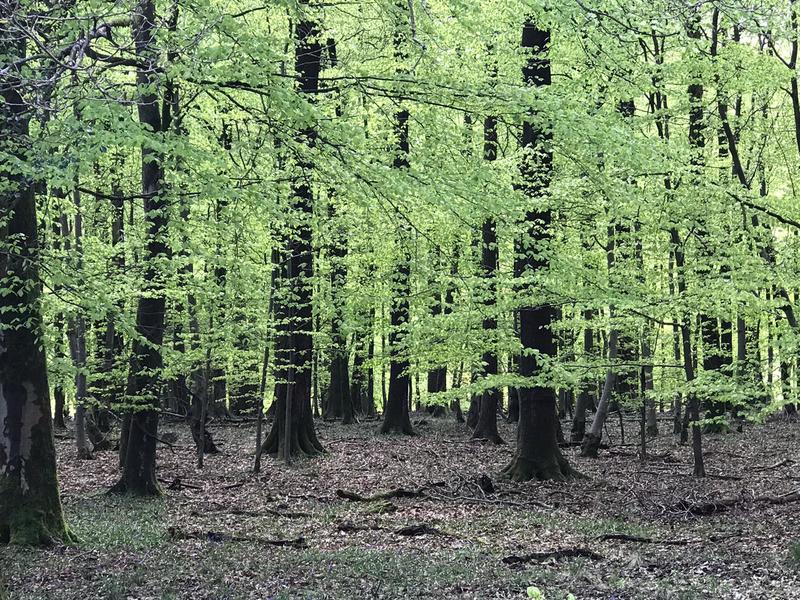 a picture of the Beech Woodland taken by Dawn

We said goodbye to Kevin and Pat, then Dawn and I drove Nigel back to Chepstow before we drove home. We got back at 6:30pm having left at 6:30am, it had been a long but very enjoyable day. I added six species to the May list now at 120) and three species to my year list (now at 175).