Dawn had an hospital appointment at 10am for some physio on her knee, I dropped her off and went down to Ninesprings Country Park to wait for her. I walked around the main lake looking for the Mandarin Duck with nine chicks which had been seen by Steve Chorley yesterday. 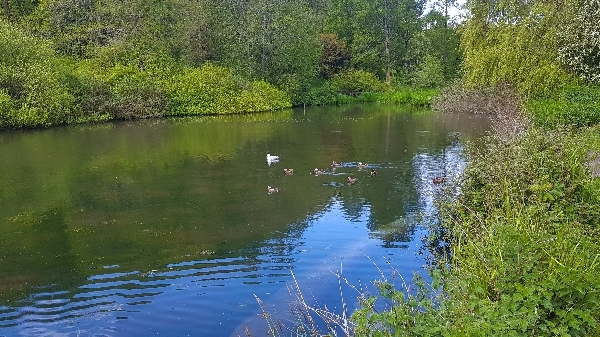 the lake at Ninesprings was full of birds with chicks 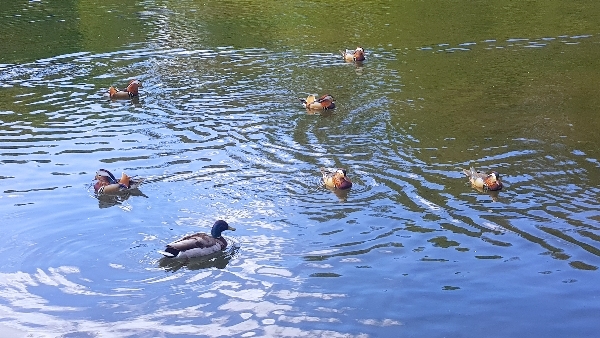 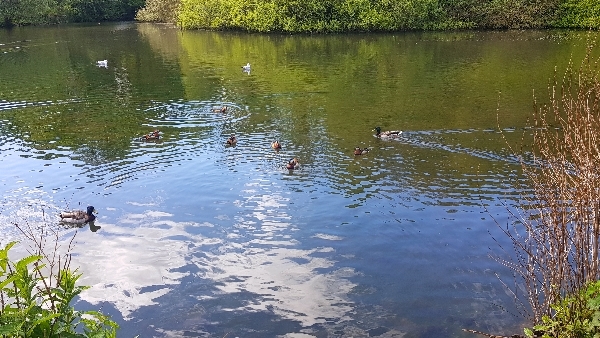 I had three sightings of Kingfisher and I saw 8 male Mandarin Ducks before I walked around to the far side of the lake and found the nine chicks. I had commented yesterday that I didn’t expect to see nine still alive but I was pleasantly surprised to see them all intact. However, they all swam across the centre of the lake and one got left behind, as this last chick rushed to catch up with the other a Herring Gull took off and headed straight for it. The female mandarin was having none of that, she charged at the Gull and chased it off, well done Mrs Mandarin.

I collected Dawn around 10:45 and we set off for a visit to Lyme Regis. It took 40 minutes to get to Uplyme where we parked the car, our plan was to follow the footpath along the river Lim to the beach at Lyme Regis.

It was a lovely walk and when the sun came out it felt really quite warm. We had several sightings of Dipper, one or two prolonged views, isn’t just a shame that I decided not to carry my scope today? 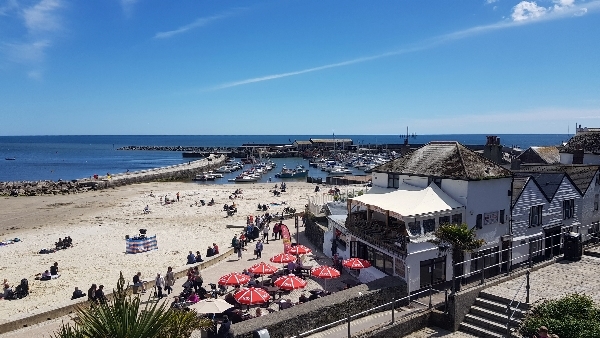 We heard Nuthatch, Chiffchaff, Robin, Wren and Song Thrush before we found Grey Wagtail and yet another Dipper. By the time we reached the fish and chip shop near the beach we had seen many species and enjoyed the Dipper very much. 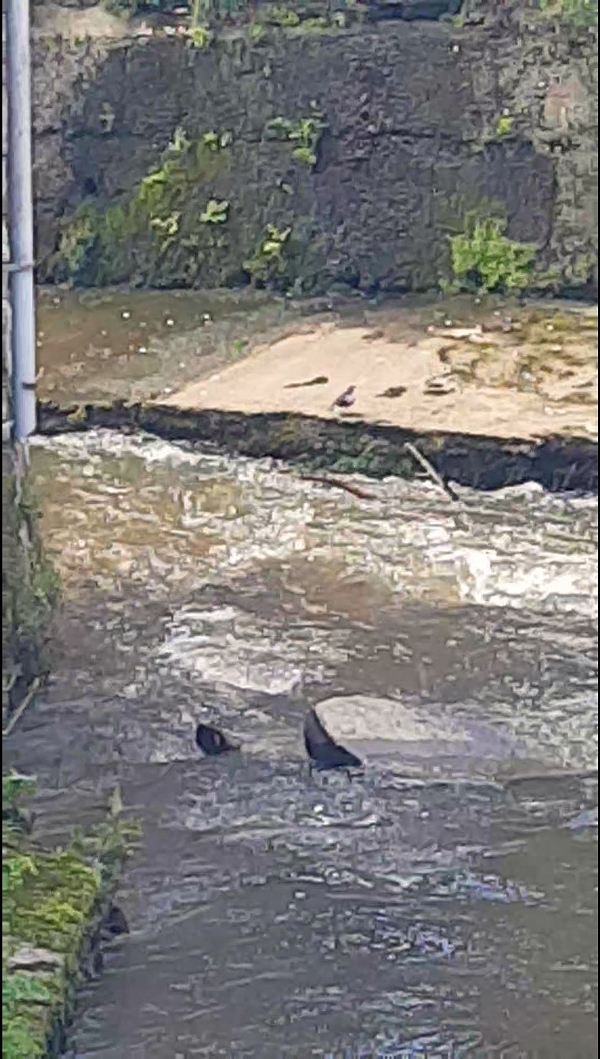 there is a Dipper in this awful picture

We ate our take-away lunch in a small memorial park, keeping an eye on the local Herring Gulls who have a habit stealing food from your hand!! I watched a dozen or so Common Swifts flying high over the town before we went for a walk along the sea-front. 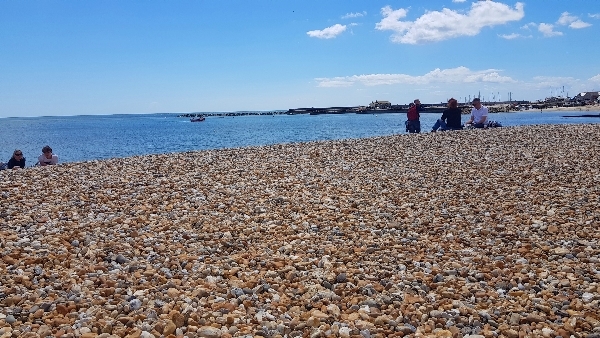 the pebble beach at Lyme

After stopping for a nice cup of coffee (tea in Dawn’s case) we headed for the Cobb, a huge concrete break-water that protects the small harbour. At the end of the Cobb there is a an extension to the break-water, a long pile of very large rocks stretch for a hundred meters into the bay. 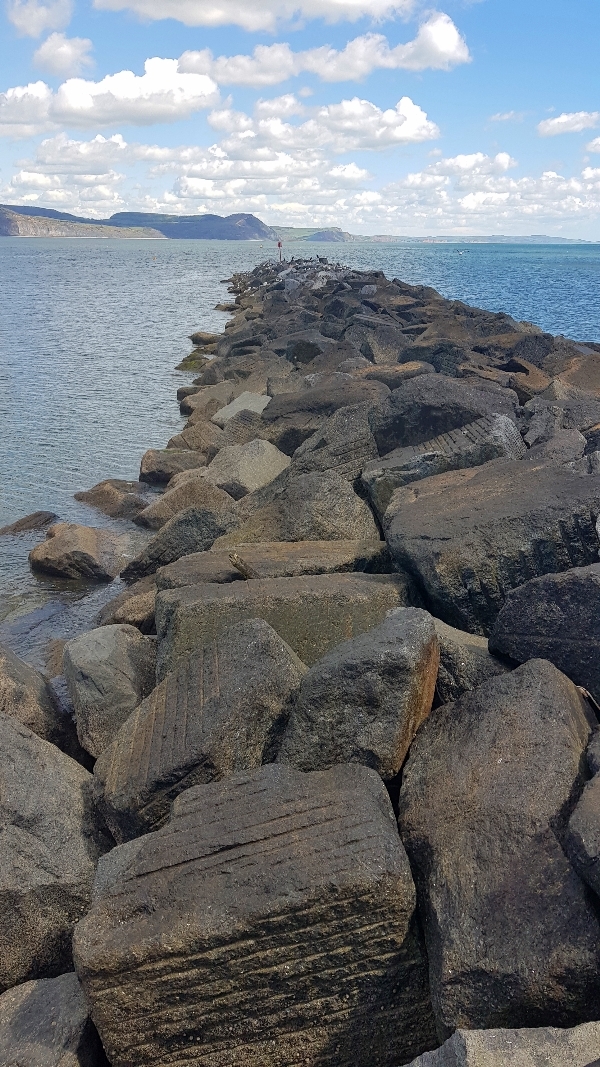 the break-water extension of rocks, they harboured a lot of birds

It was high tide and many birds were roosting on the very end of the rocks, we saw many Herring Gulls, a few Cormorants and a single Shag. I then picked out two Whimbrel, a couple of Dunlin and at least four Ruddy Turnstones, all looking very colourful in their summer plumage. Lastly I found, first two Purple Sandpipers and then another five, the latter five were much closer and I was able to digi-bin them using my phone camera and my binoculars. At one stage I was holding the phone to my binoculars whilst Dawn pressed the shutter button. 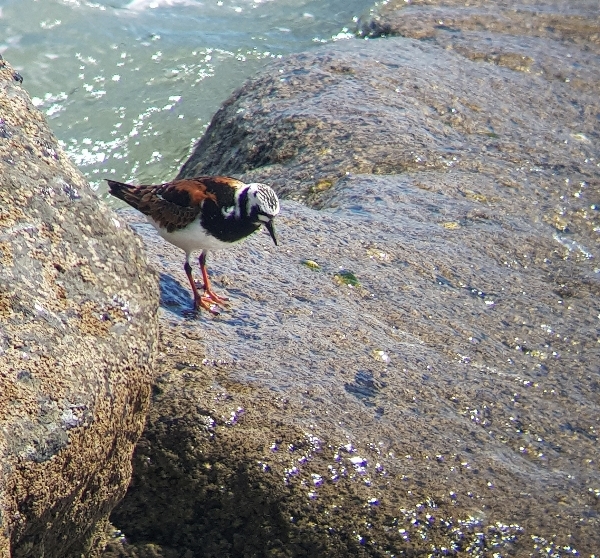 one of the four Ruddy Turnstones seen on the rocks 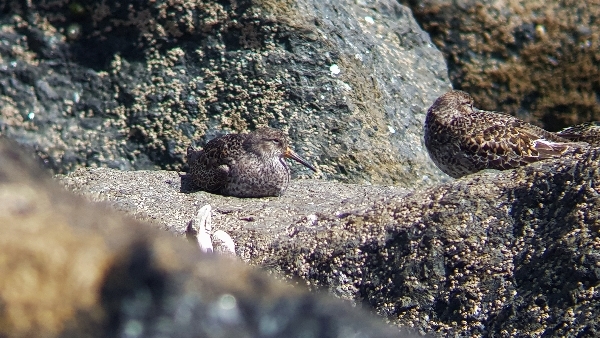 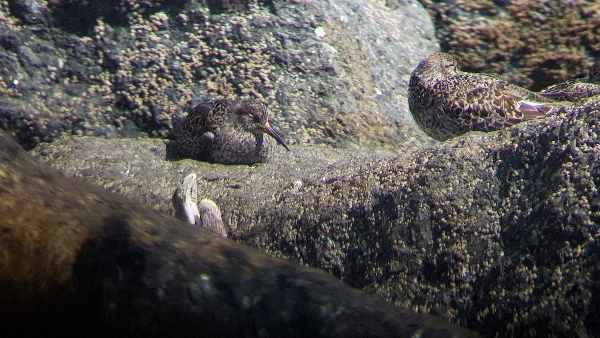 We walked back along the beach and up into the lovely gardens on the side of the hill where we sat for a while. I could see a Herring Gull sitting on a nest on a roof of one of the sea-front buildings, it looked quite comical sitting there. 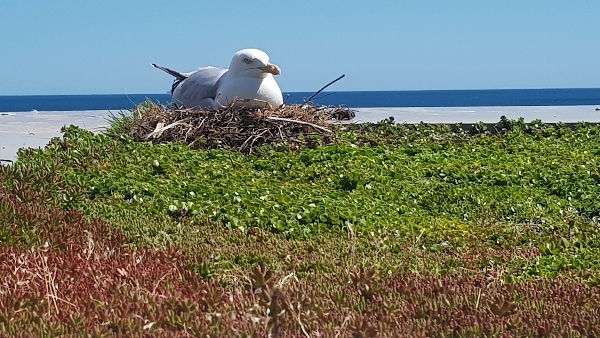 Herring Gull on the nest

A nice chocolate-chip ice-cream went down very well when we got back to the beach area. I spotted a Rock Pipit, a Great Black-backed Gull and a Pied Wagtail near the shore. I scanned the harbour area one last time and came across the semi-resident Eider Duck! This male bird was spending its third winter in the harbour and I never expected to see it on the 19th May. 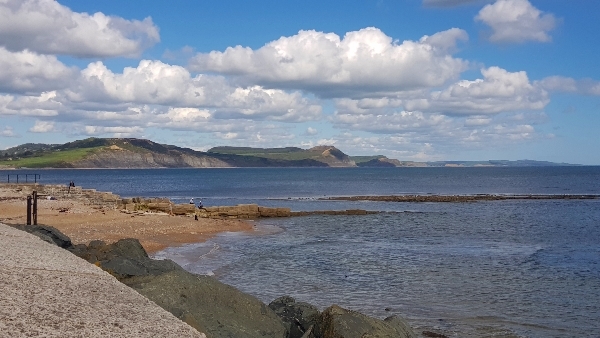 the view looking east from Lyme Regis, you can see Golden Cap (the tallest cliff in the picture)

We made our back to the car, a few butterflies were on the wing but not many and we didn’t see any Dippers on the return journey. We got home just before 6pm, just in time for me to watch my Football team on the telly, (they won, of course).