WINTERBOURNE DOWNS AND MARTIN DOWN

This was another epic day out with Nigel, he drove over from Chepstow and we jumped into my car and headed east. Dawn also came with us but we dropped her off in Salisbury at her friends house where she was staying for the weekend.

From Salisbury Nigel and I made the short journey across the Wiltshire countryside to a small RSPB Reserve at Winterbourne Down. It was typically chalk downland, with rolling grass meadows and a large area fenced off that was managed especially for STONE CURLEWS which of course was our main target species of the day. 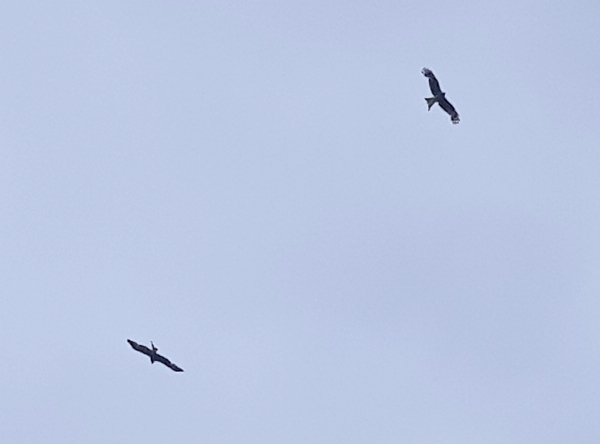 Red Kites were above us for most of the day

In the car park we stopped for a quick cup of coffee, we set up our scopes to scan the countryside, a pair of Red Kites drifted over, they seemed to be ever present for the rest of the day. It took all of five minutes to find our target species, a STONE CURLEW was standing right in the middle of the managed area near a couple of Brown Hares. Then a second one appeared! Job done!! Normally I would dash off to our next destination but a local guy told us that we may get closer views from a viewing area about 150 meters along the track, so off we went. 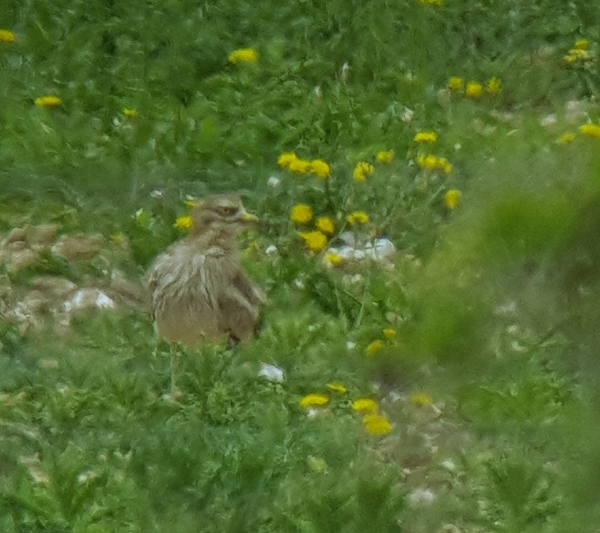 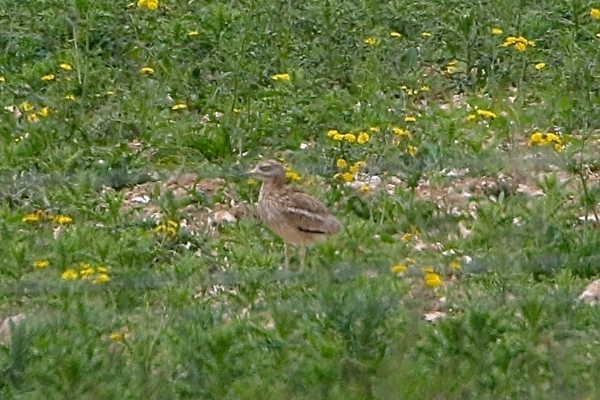 this is Nigel's shot of the Curlew using a digital SLR camera with a 400mm lines and 1.25 converter

We heard Blackcap and Chiffchaff along the way and we saw Dunnock, Blue & Great Tits and a Song Thrush in the hedgerow. From the viewing screen (blind) we did indeed get better views of the two birds but they did not stay in view for long and they were still quite distant. We also found my favourite bird singing from a fence post, a Corn Bunting!! 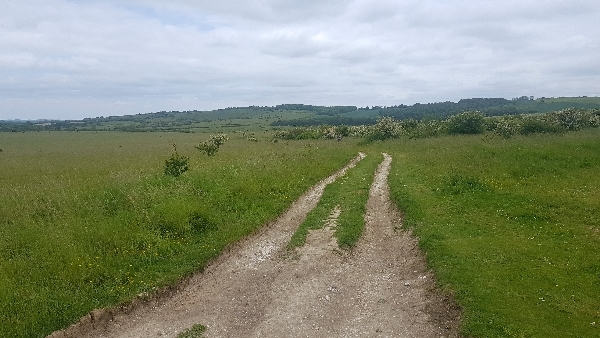 typical Chalk Down in Wiltshire

From there we drove through Salisbury and headed southwest towards Blandford Forum, the traffic in Salisbury was murderously slow and annoying. Finally we broke free and got to a small village called Martin where a track led us to a car park on the edge of a huge managed National Nature Reserve called Martin Down. 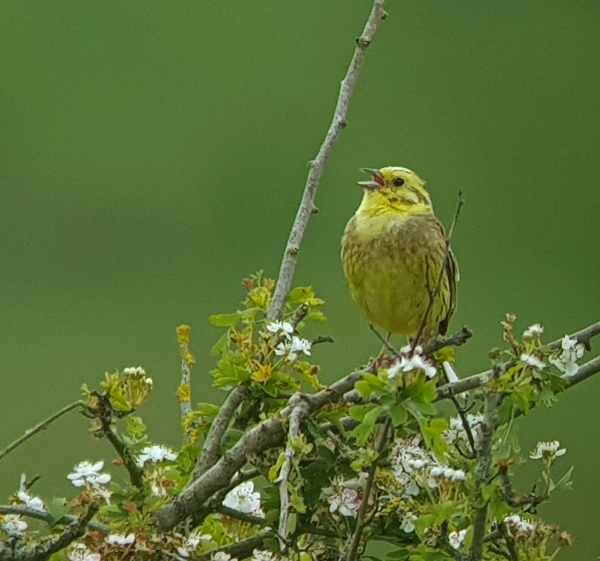 Yellowhammer taken by me 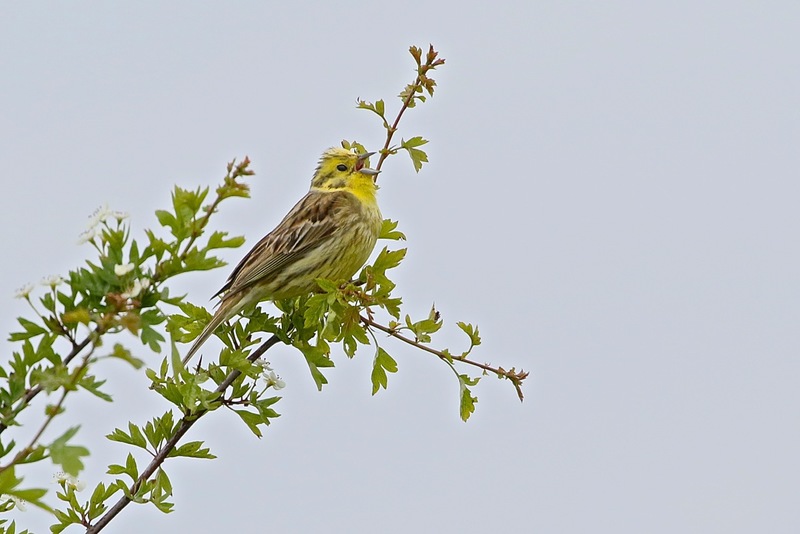 Once again we were faced with huge chalk downland (350 HECTARES) with many paths that criss-crossed a vast area, scattered bushes and some dense copse broke up the vast grassland. Martin Down is famous for its population of Turtle Doves which our main target bird species, we were also there to look for Marsh Fritillary Butterfly and Burnt-tip Orchids. In recent years Montagu's Harrier and Stone Curlews have disappeared from this area, let's hope the Turtle Dove doesn't go the same way. 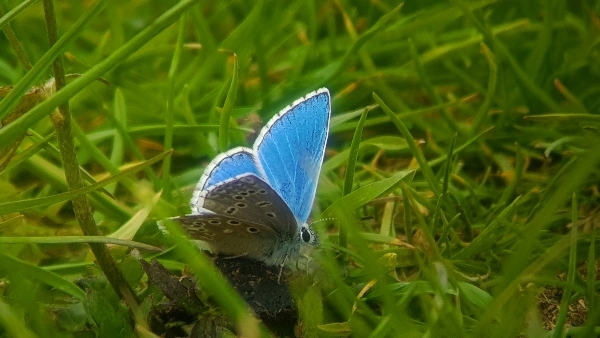 Adonis Blue, what a stunning colour

As it was now 12 noon we stopped to eat our picnic lunch and drink another coffee before we set off on a mammoth walk. It was still cloudy and quite breezing so we didn’t expect to see many butterflies, but within the first five minutes we bagged an Adonis Blue Butterfly, my first for the year. 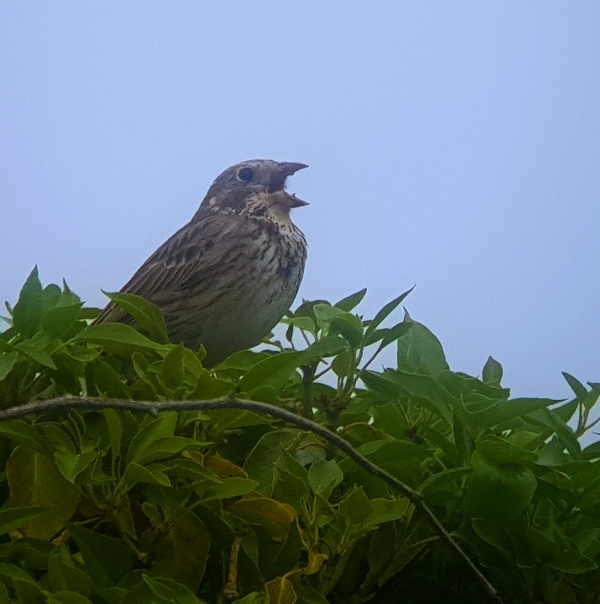 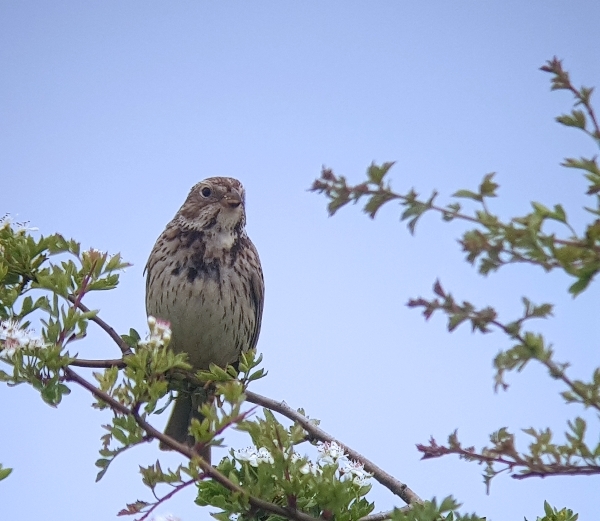 Two Partridges landed in a grass ahead of us, they could have been Grey Partridges being so small but we never saw them again. We then found both Yellowhammer and Corn Bunting singing from the top of nearby bushes, we both got reasonable pictures of them. Further along the track we found Dingy Skipper, Common Blue, Small Blue and Small Heath, a couple of Brimstone Butterflies flew past us and a pair of Red Kites were ever present above us. 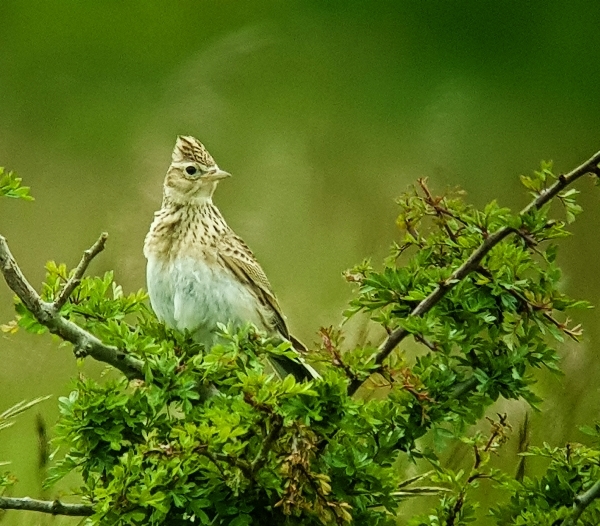 Skylark in a bush??

Lots of Skylarks were singing high above us and we managed to find one perched unusually in a low bush, we also saw lots a Linnets, Wood Pigeons a few Collared Doves but no Turtle Doves. From the car to the top of the reserve was a two mile walk, mostly on a steady incline, Nigel gave up ¾ of the way up and sat down near some ancient earth-works. I continued and arrived at the top car park near the main road, from the there a made my way across to an ancient dyke where the orchids were supposed to be growing.

Along the way back I met up with Nigel again together we found the two places where Marsh and Burnt-tip Orchids were growing. After spending sometime photographing the orchids we walked back to the car, we noted both Common and Lesser whitethroats in song and we saw more Corn Buntings and Yellowhammers. 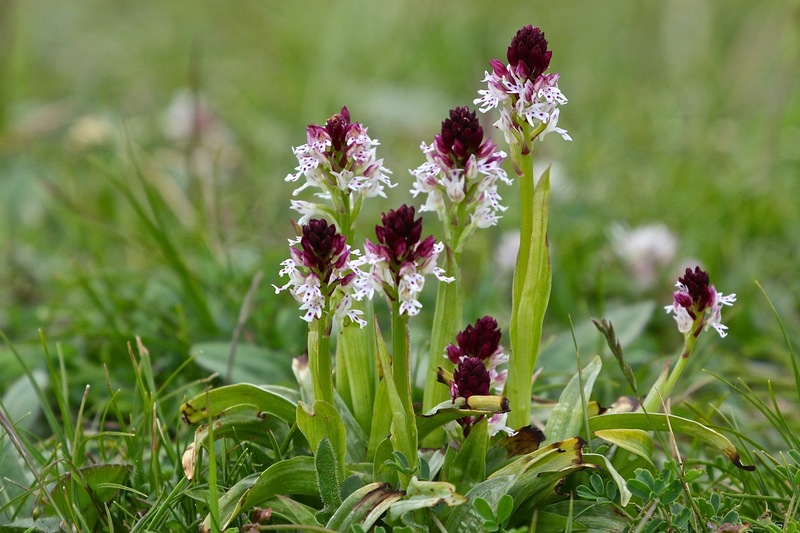 Nigel's shot of the Burnt-tip Orchid

Back at the car park we heard from a birder of another place where to look for Turtle Doves, it was another ½ mile walk, I went alone and spent another hour looking and listening over a small copse from the side of a hill, to no avail!! Nigel had smirk on his face when I got back, smug that he never made the final walk! 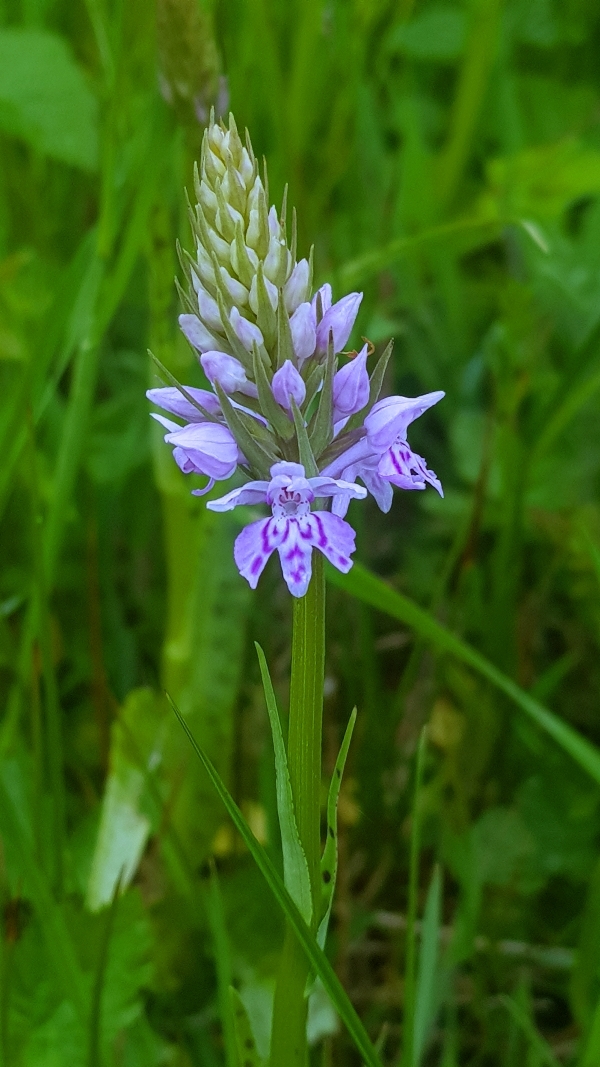 We set off for home around 4pm making one short stop along the way at a small butterfly reserve called Lydlinch Common. It is a place I go to watch and listen for Nightingales but none were singing today. We did find some more orchids. 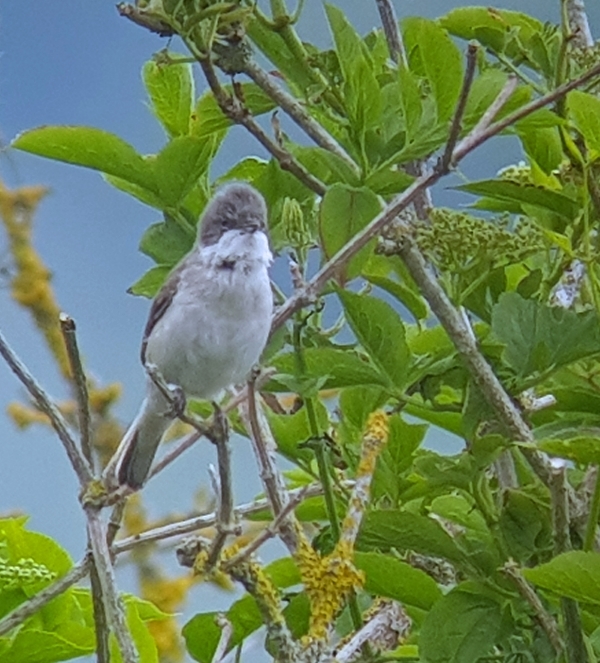 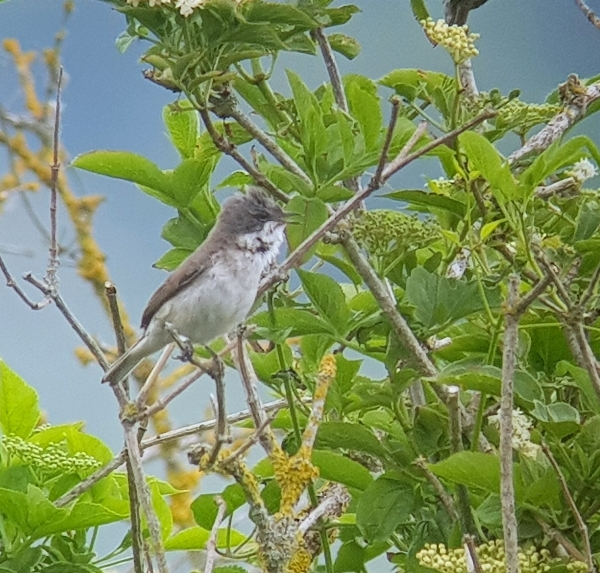 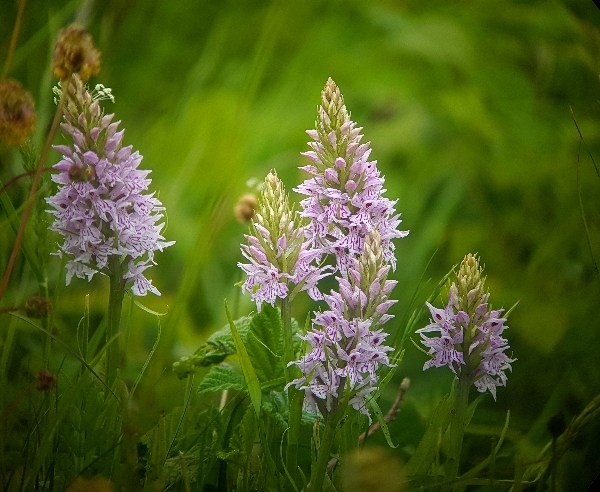 We got back to my home around 6pm and after a quick cuppa tea Nigel set off back to Chepstow, he arrived home just before 8pm, it had been a long but enjoyable day.