Well, I had a varied and exciting birding-day today, it started very early at Ham Wall on the ‘Levels’ and finished late afternoon on Martin Down near Salisbury.

Yesterday a RIVER WARBLER had been found at Ham Wall, this skulking plain-brown species breeds in Eastern & Central Europe and is a rare visitor to the UK, in fact, this one was the first ever seen in Somerset!! That made it worth while getting up for, I collected Guy Campbell just before 7am and we set off for the 30 minute drive to Ham Wall.

The car park was almost full, we did expect a large gathering of birders and we got one, at least 100 people were ahead of us as we walked to the spot where the birds was singing. We could tell exactly where the bird was showing by the position of the cameras and the scopes. We were lucky on a couple of counts, first, the bird was singing from a very open area of reeds and shrubs where a large number of people could view it and secondly, this normally skulking bird was singing out in the open instead of the middle of a dense bramble bush. 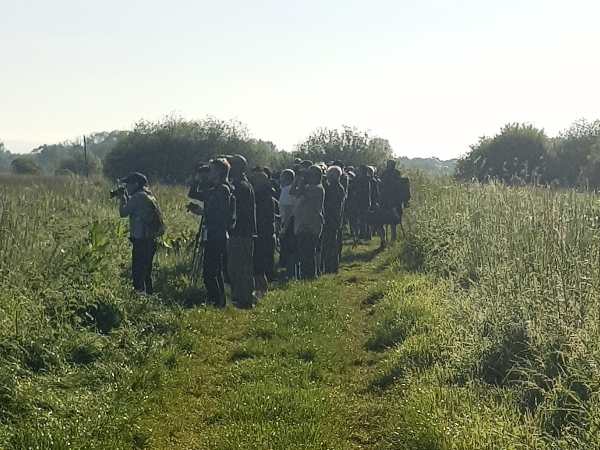 some of the crowd at Ham Wall this morning

We had excellent views, it was really quite pleasant viewing and despite the huge crowd the bird performed very well, it was a UK first for both of us but we both had seen it before in either Poland, Bulgaria and/or Hungary. 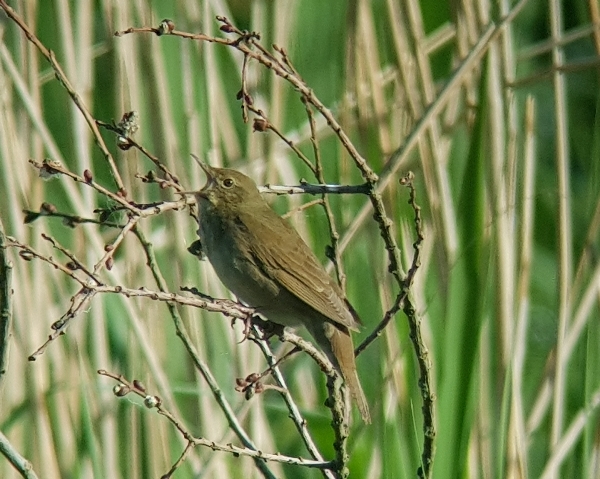 We also heard a Bittern booming, we saw Great Egret, Marsh Harrier, Gadwall, Mallard and a few common species, after a short while we set off for home and got back around 9:30am. we both had things to do this morning. Job done! 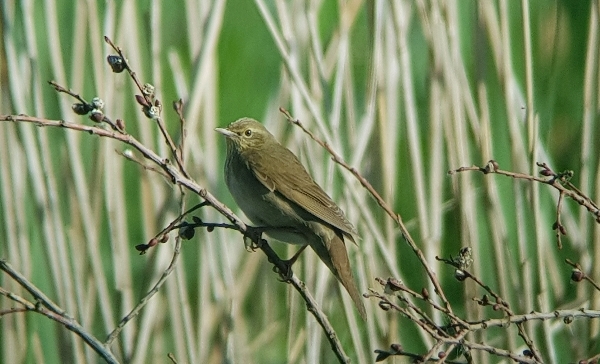 more of the River Warbler 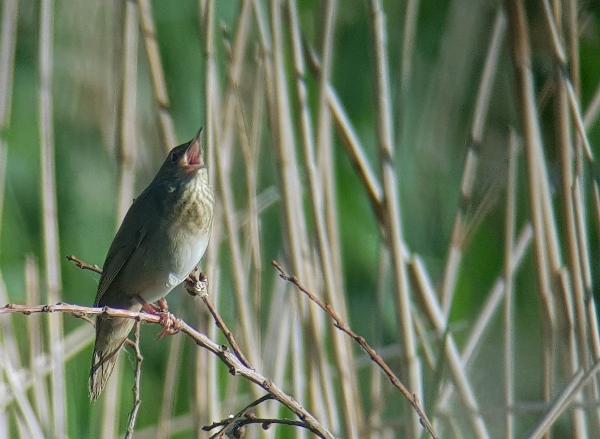 At 11am I set off for Salisbury to join Dawn who was staying at our friends house for a couple nights, I planned the route so that I coculd stop at a couple of places along the way to look for Marsh Fritillary Butterflies. My first stop was at Lydlinch Common about 15 miles from home, I had perfect weather conditions for the butterflies to fly in.

The first bird I heard as I left the car was a Nightingale, I heard three of them by the time I had walked onto the reserve to where the butterflies would be. I also heard Blackcap, Chiffchaff, Garden Warbler and Lesser Whitethroat. Having made several attempts to see the Marsh Fritillary during the last month with zero luck, so it was very rewarding to find not one, but at least half a dozen in one small area. 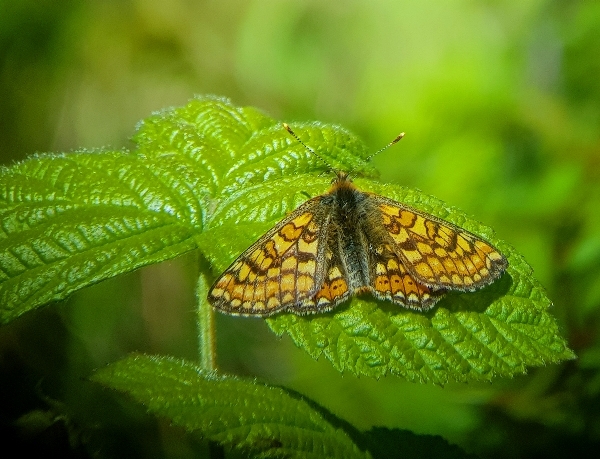 I watched the butterflies for about 30 minutes and also recorded Common Blue, Small Heath, Brimstone, Small White, Speckled Wood and a Mother Shipton Moth. None of the Nightingales put in an appearance, so I left after about an hour. 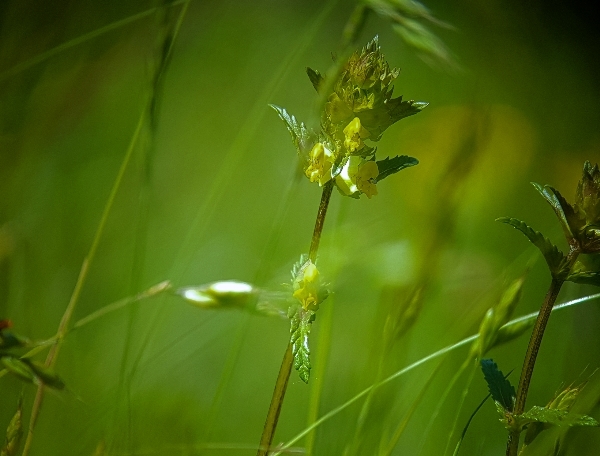 Yellow Rattle flower, I also found three spikes of Greater Butterfly Orchid but they were not in flower.

My main stop was at Martin Down which lies just 8 miles from Salisbury, I parked at the Lower car park and headed for an area of scub and thickets hoping for a sighting of a Turtle Dove. I spent two hours walking the tracks, the warm sunshine brought out many butterflies. I found Green Hairstreak, Small Blue, Common Blue, Adonis Blue, Grizzled Skipper, Dingy Skipper, Brimstone and Small Heath. 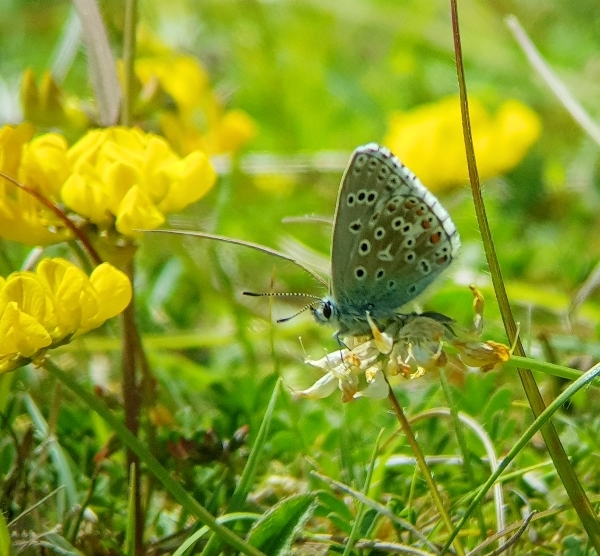 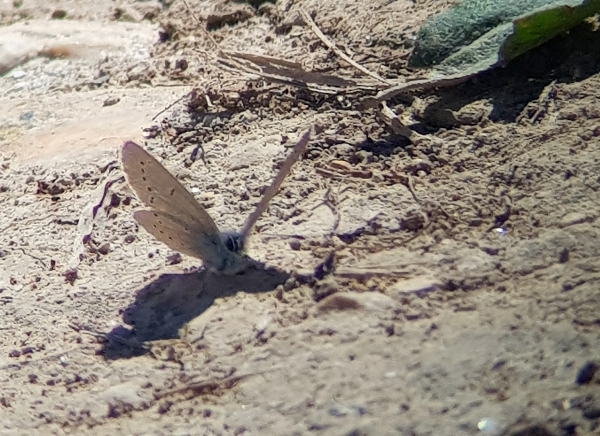 I never had a sniff of a Turtle Dove, perhaps they have all been shot in Morocco, Spain, Italy, Malta or France on their way back from their wintering grounds?? I did see Yellowhammer, Lesser Whitethroat, Corn Bunting, Skylark, Linnet and Goldfinch.

I left the area around 4pm and finished my journey to our friends house, Debbie and Nick, who put on a lovely BBQ in the sunshine on their terrace, what a lovely way to end the day.