ON THE HUNT FOR HEATH FRITILLARY AT HADDON HILL, EXMOOR , DEVON

The Heath Fritillary would have been long gone from the UK if it wasn't for conservation efforts. This butterfly has historical links with woodland 'coppicing' which is no longer practiced in most of the UK. The Heath Fritillary is restricted to this specialised habitat where trees and scrub are cut back to ground level on a regular basis. This butterfly has very special needs and will not fly if the temperatures falls much below 20C, it is now one of our rarest butterflies but has been saved from the brink of extinction by conservationists. 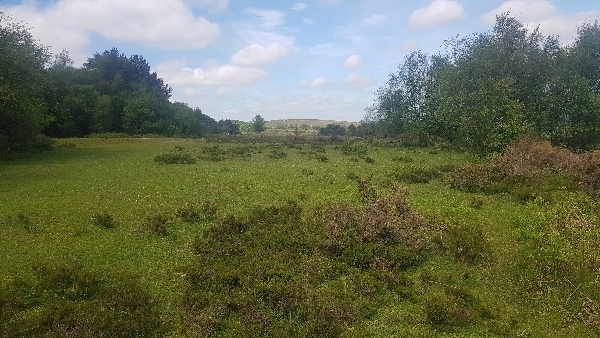 typical scrub habitat found as you walk from the car park

Guy picked me up at 8am and we drove to the edge of Exmoor in North Devon about 15 miles north-east of Taunton, near Wimbleball Lake,  it took about 1 1/2 hours. We parked on a high ridge called Haddon Hill where east facing slopes are covered in birch and firs with bracken and gorse scrub. Lower down the slope a strip of woodland is 'coppiced',  managed for the butterfly. 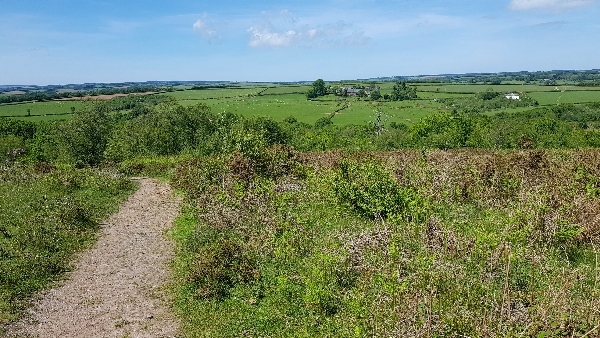 the scrub habitat on the slopes

We searched the slopes where the butterfly was supposed to favour, in fact we spent two long hours searching without luck. We saw a few birds such as Nuthatch, Tree Pipit, Common Crossbill, Willow Warbler and we heard Common Redstart singing and a few Siskins flew over. 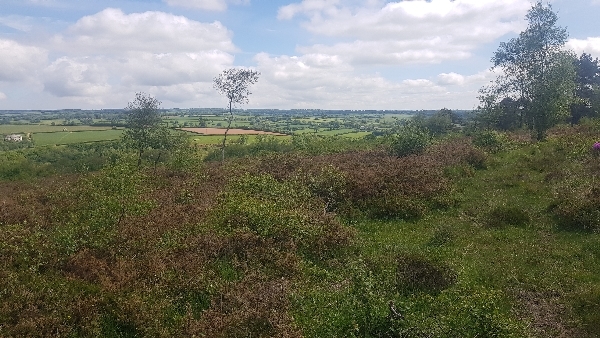 Other butterflies on the wing included, lots of Green Hairstreak, Small Heath, Brimstones and one or two unidentified Blues. 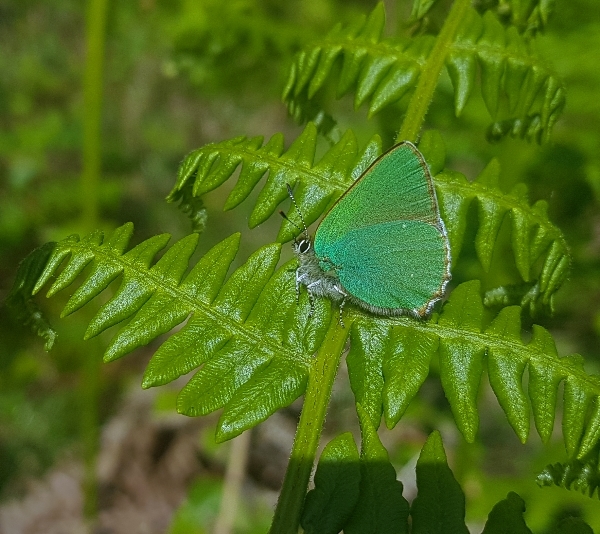 Around midday we bumped into two other guys on the same mission, they told us that the right temperature for butterfly to emerge was approaching, we had been too early!!  So with renewed vigour and two more pairs of eyes we set off for a second scour.

The two other guys called to us from down the slope they had found one Heath Fritillary but it had gone by the time we got to them. A local dog walker approached and told us about the consevation work that he and a group had carried out over the last few years, he pointed us to the best location where two-year old coppicing was to be found.

After another hour of waiting around two HEATH FRITILLARY butterflies flew past us!! Hooray, we had seen it, at last!! 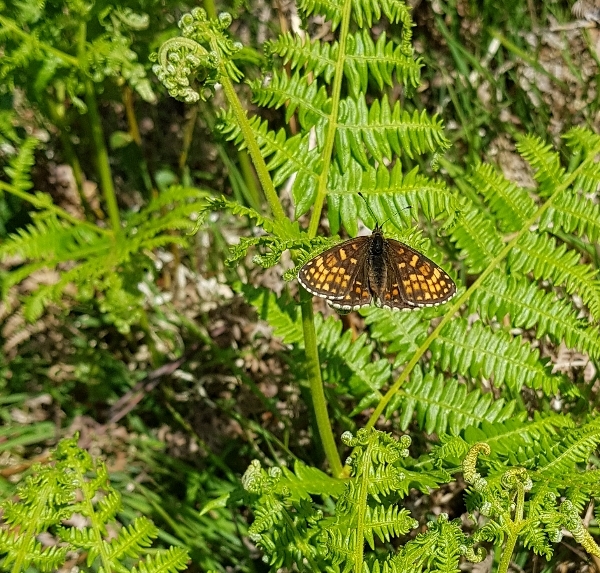 Heath Fritillary settled on the bracken but only for a few seconds before moving on.

We never got any picture because the butterfly would not settle for very long, so we gave up and walked back up to the car park for lunch. We ate our picnic and drank some coffee, it was getting very warm by now so we decided to go and find our own butterflies. As we walked down the slope we saw, first one Heath Fritillary, then another, then two more, they were everywhere!! This time we found them higher up from the coppice on a slope covered in bracken. 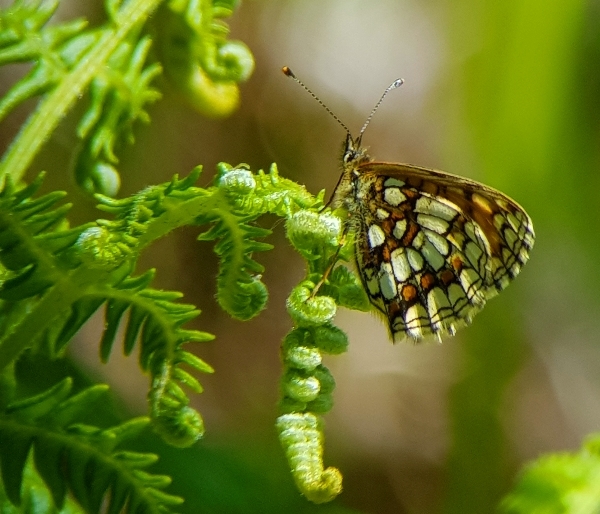 finally we got good pictures of them 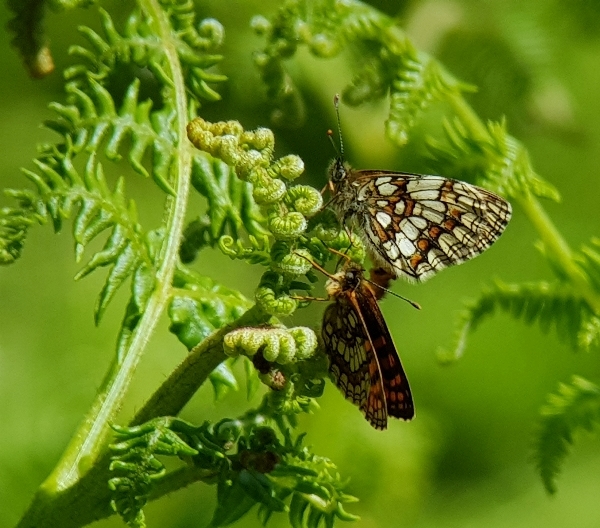 a pair getting together ready to mate 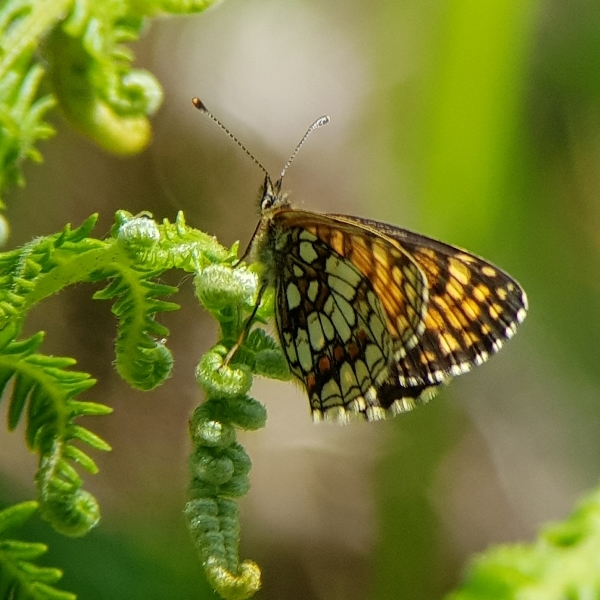 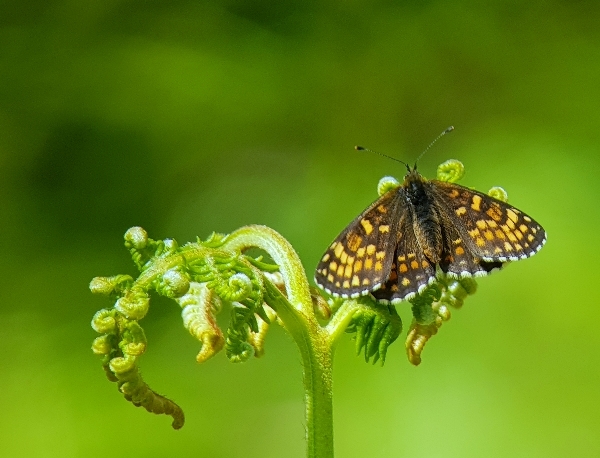 We must have seen a dozen and got some great pictures of them, one pair was even mating! We stayed around for another hour and at 3pm we decided to call it a day. The traffic through Taunton was horrendous which took the shine off a very successful day, but after seeing one of the UK's rarest butterflies nothing was ging to upset us.