A VISIT TO WEYMOUTH – LODMOOR AND RADIPOLE LAKE

Yesterday I took a day off for recuperation after the weeklong trip to Yorkshire, I am still smarting from missing the arrival of the BLACK-BROWED ALBATROSS  (nick-named Albert Ross) which decided to appear as I was making my way home!! Doh!!!!!

Dawn and I decided to drive down to Weymouth to visit Lodmoor and then walk the entire length of the promenade along the sea-front. We arrived at 10am and parked the car at the north-end of the reserve, at the back door, so to speak. 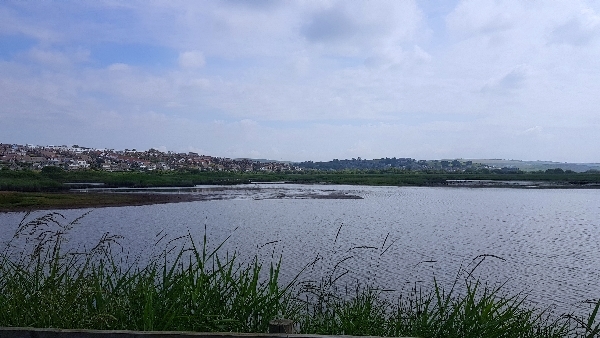 Our first view of the open water at Lodmoor

We heard three warblers before we even reached the main west-track, Cetti’s Warbler, Blackcap and Chiffchaff all sang out to us as we ambled along in the warm sunshine. The west track takes you alongside a good stretch of phragmites reeds where we heard several Reed Warblers singing and in the scrub on the other side of the track we heard a Lesser Whitethroat also singing!! That’s five warblers in 10 minutes at the end of June!! 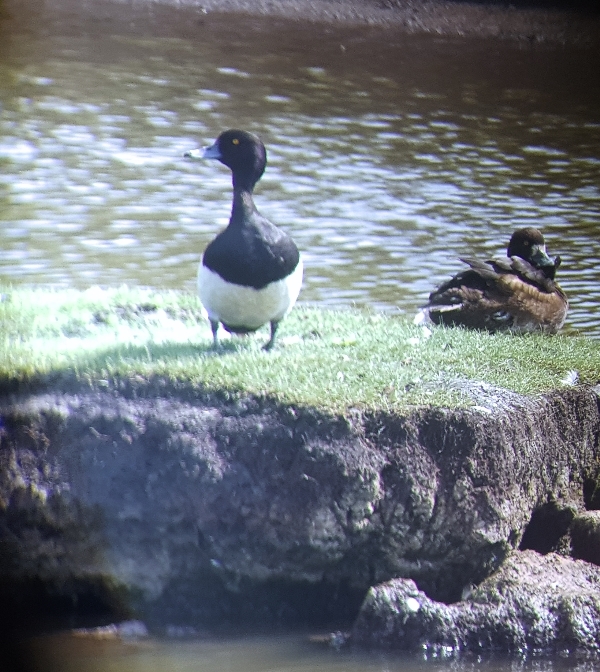 a pair of Tufted Ducks taken through my binoculars

We soon arrived at the lookout points where we could see open water, I counted 8 Little Egrets, 1 Great Egret, 5 Grey Herons and a Eurasian Spoonbill, all in the pools in front of us. As I didn’t have my scope there are no pictures of them. 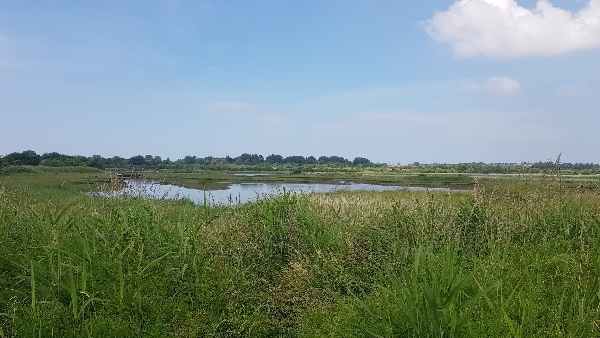 A single Pied Avocet was also nice to see along with Redshank, Green Sandpiper, Lapwing and a couple of Black-tailed Godwits. We could see a lot of action near the gull and tern colony so we set off to view from along the southern track.

Common Terns, Black-headed and Mediterranean Gulls were in good numbers but there was no sign of the Roseate Tern that was present last night. We added a few duck species to the list and not much else.

The only other notable sighting was of a Wood Sandpiper which was feeding in the shallow pool called the Beachdown Way or the ‘Crake’ Pool, you had to climb onto the wooden fence to get a decent view. 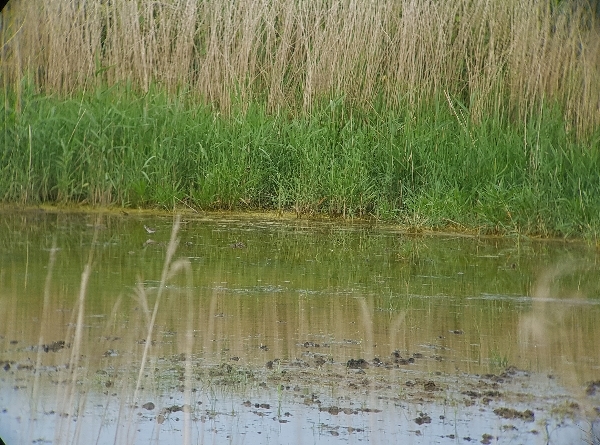 those 'good birders' amongst you will see a Wood Sandpiper in this picture, the rest of you should look below where a larger image shows an equally as bad record shot of the bird!!! 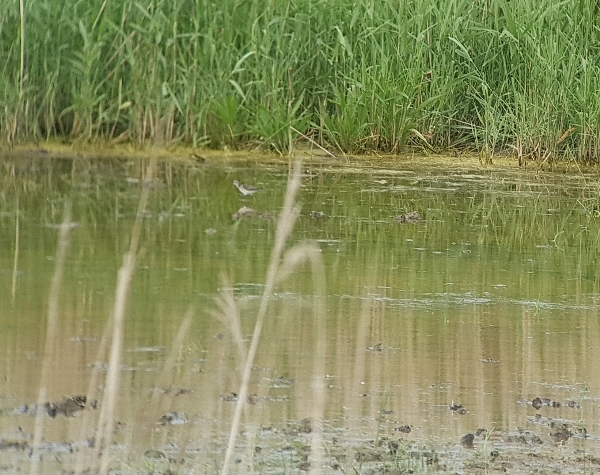 From Lodmoor we walked along the seafront and into the town centre of Weymouth, it was lunch time as we arrived at the Town Bridge, which is a lifting bascule bridge still in use to allow sail boats access to the main harbour. The bridge is lifted every two hours through the main part of the day, we arrived just before 12 noon, the bridge lifted a few minutes later. 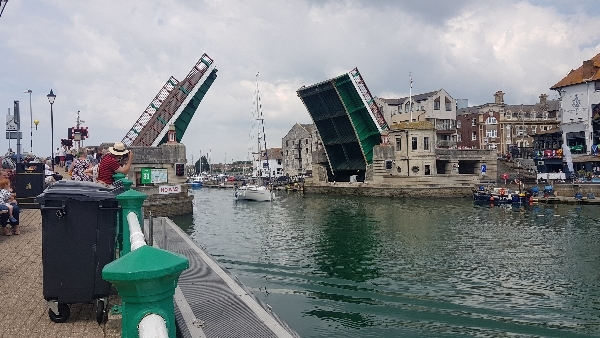 Bennett’s Fish and Chips on the harbourside are the best we have tasted in the world, if you are down that way you must try them!! We sat on a bench overlooking the harbour and devoured our lunch.

It was a slow walk back as we were both full to the brim, too many chips!! We made it to Radipole Lake just as the sun disappeared and a light wind came up. I was hoping to walk the ‘Buddleia Loop’ to look for Norfolk Hawker, a rare dragonfly which can now be found in Weymouth. However the weather conditions were not favourable.

We made our way along the eastern side of the reserve where we saw Reed Bunting and our only Marsh Harrier of the day. Lots of Mute Swans, Moorhens, Mallards, Tufted Ducks, Coots and many gulls could be seen on the main lagoon.

We got back to the car around 3pm and headed for home. Later on, in the garden Dawn pointed out some caterpillars on the buddleia, which we identified as the larva of the Mullien Moth. 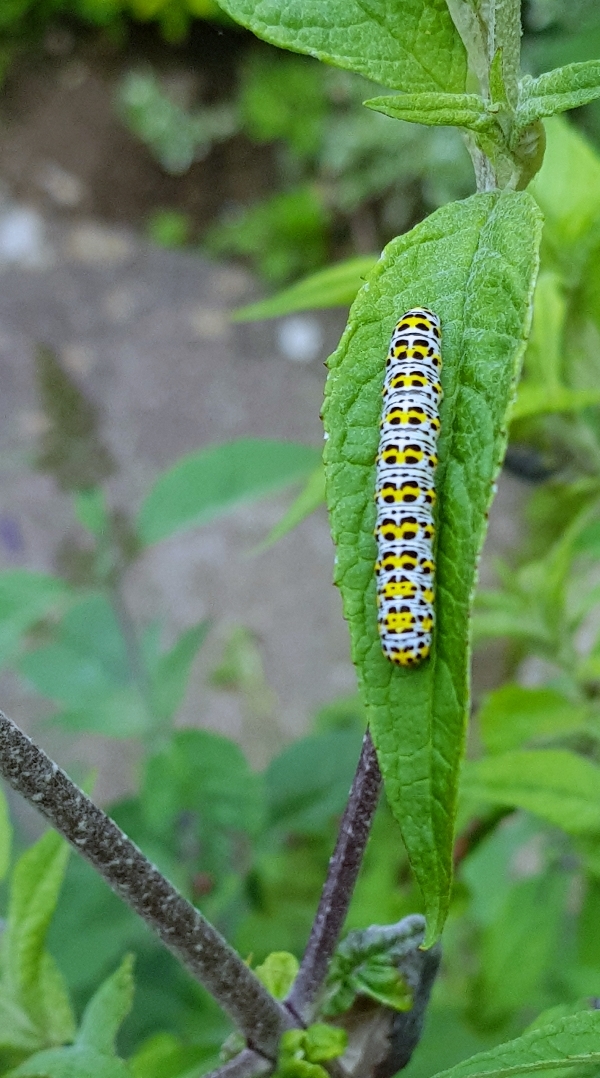 the larva of the Mullien Moth

Then she found some instars of the Speckled Bush Cricket, amazing, I was well made up with that find, well done wifey! 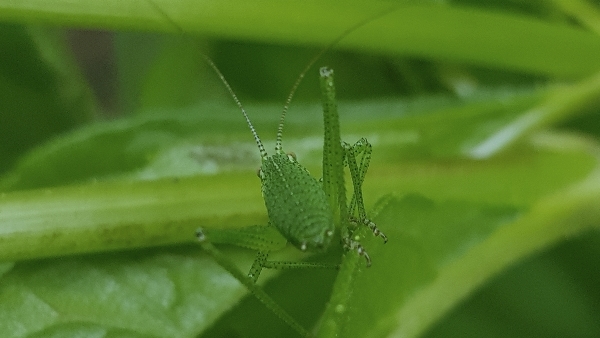