WEATHER; hazy sunshine most of the day some mist. Temp 18-20C

With frustration, desperation and humiliation, the saga of the Glanville Fritillary continues. You may remember the debacle of June 16th when Guy and myself went searching for the Glanville in three different places and all were the wrong sites. Since then, we have discovered that when we did find the correct site, Compton Down, we were searching the wrong area and missed the butterfly. 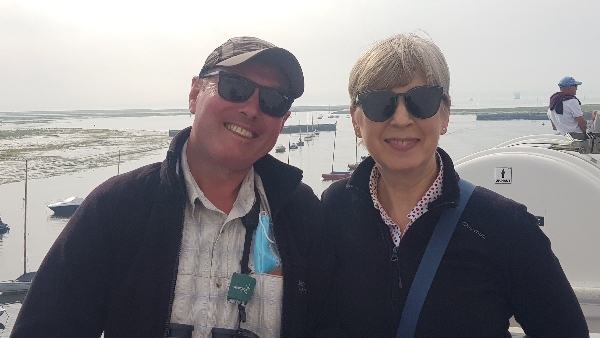 my companions for the day (Guy is on the left)

Today we went to the best place in country to see them, in fact, for many years it has been the only place to see them, the Isle of Wight. We knew that the flight period of the Glanville is usually over by mid-June, but this year had been exceptional, many species of butterflies were flying late because of the cold spring, so we had hope!!

Guy came over to our place at 6am and I drove Dawn, Guy and myself down to Lymington in Hampshire to the Ferry Terminal, it was a 90 minute drive. 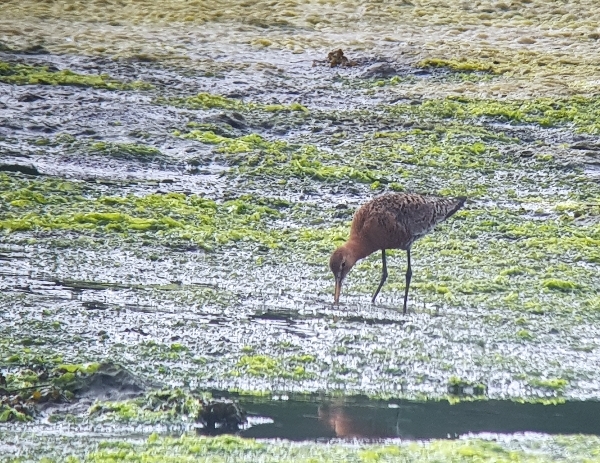 Black-tailed Godwit on the shore at Lymington

During our wait to board the 8:45 Ferry we scanned the local shoreline and came up with a number of bird species: Mallard, Canada Goose, Little Egret, Common Shelduck, Lapwing, Redshank, Black-tailed Godwit, Curlew and as we pulled out of the harbour we saw two Whimbrel in flight. 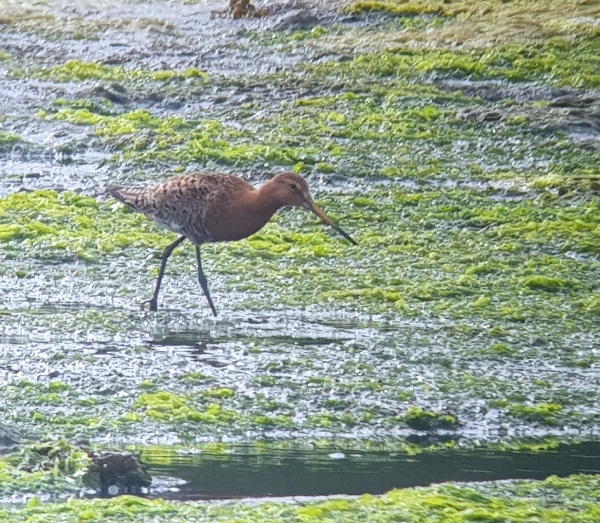 Many gulls were milling about, we saw Black-headed, Herring and Lesser BB Gulls, we also added Common and Sandwich Terns to our list. 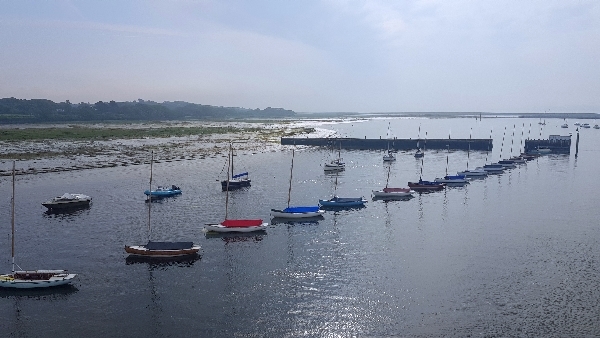 the view from the ferry at Lymington - the sea was flat calm (just how I like it!!)

Once we had landed at Yarmouth on the Isle of Wight we headed for the white cliffs on the western side just south of the famous ‘Needles’. The habitat was lush and green, it was like walking through humongous flower meadows that stretched for miles. Countless wild-flowers spread before us with the magnificent chalk-white cliffs stretched out forming a wonderful backdrop.

A typical selection of grassland birds could be seen and heard:  Meadow Pipit, Skylark, Linnet, Stonechat and Goldfinch, we also saw several Rock Pipits on the cliff-footpath and a surprisingly high number of Rooks on the cliffs. 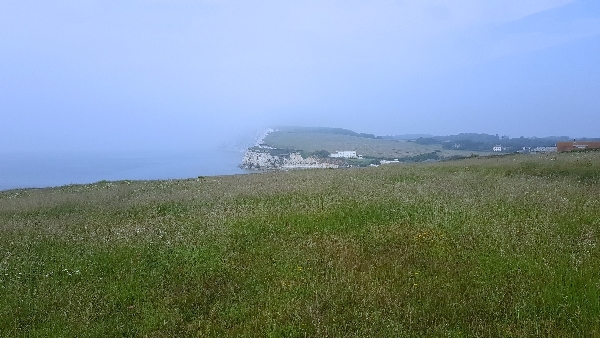 looking northwest towards the 'Needles' from the cliffs near Freshwater

We could not see the ‘Needles’ as they were obscured by mist but the whole area was stunningly beautiful. I have never seen so many Pyramidal Orchids, there was thousands of them stretching for miles. The best habitat for the Glanville is the disturbed earth on the very edge of the cliffs, where small cliff slumps and falls produce bare areas where the favoured plant the Ribwort Plantain can grow before the grasses take over. 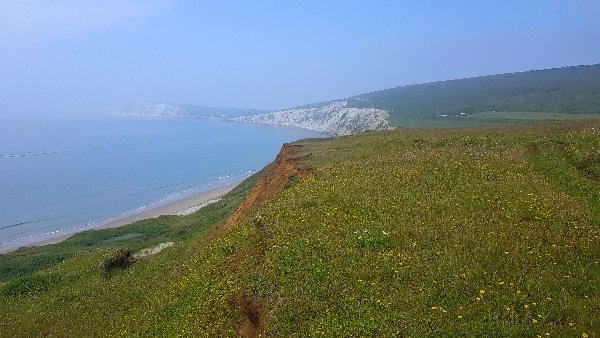 typical habitat for the Glanville, collapsed, slumped or cliff falls are ideal for the growth of Ribwort Plantain

All along the cliff top we found the plantain growing, it was a little breezy, but surely it was warm enough for the butterfly to fly? Come to think of it we didn’t see many butterflies at all for the first two or three hours as we made our south along the cliffs. 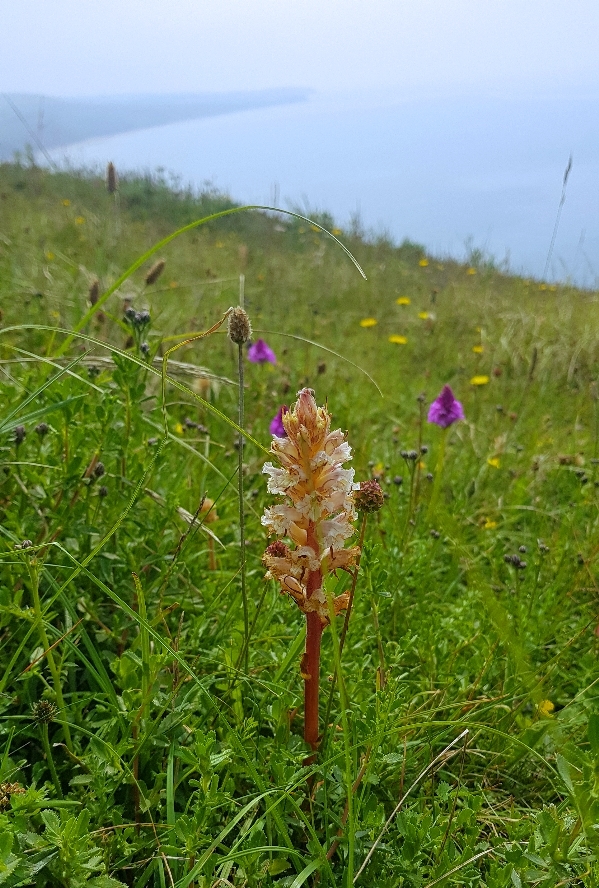 Common Broomrape with Plantain and Pyramidal Orchids in the background 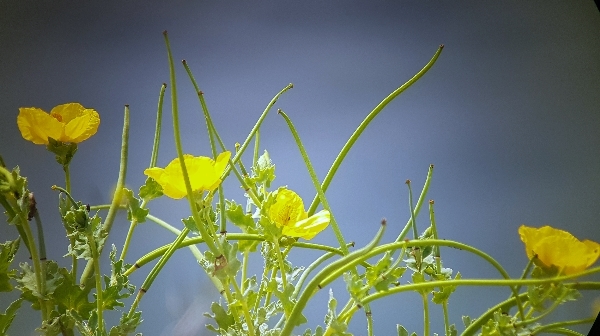 We walked to Compton Bay, it was now very warm, some butterflies were on the wing and it was approaching lunchtime. Many tourist filled the car parks and began pilling onto the beaches, we sat on the cliff top eating our picnic. We had seen:  Small Heath, Marbled White, Large White, Common Blue, Meadow Brown, Red Admiral and Peacock Butterflies, but we did not see a single Glanville. 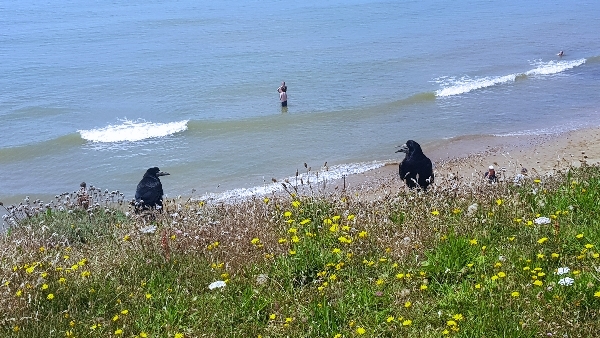 Rooks on a cliff? Coming to bread?? Never seen this before!

We then talked top a couple photographers who told us of a really good site to look for the Glanville, they had seen them 3 weeks ago in huge numbers, it sounded promising. They also showed us a Bee Orchid and told us that they are very rare on the Isle of Wight!! 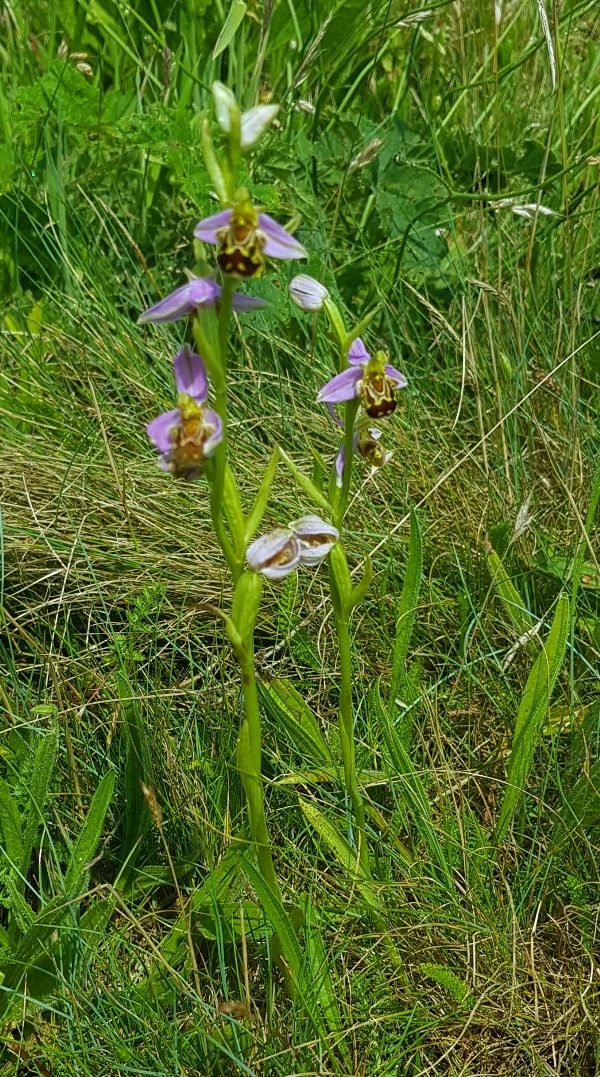 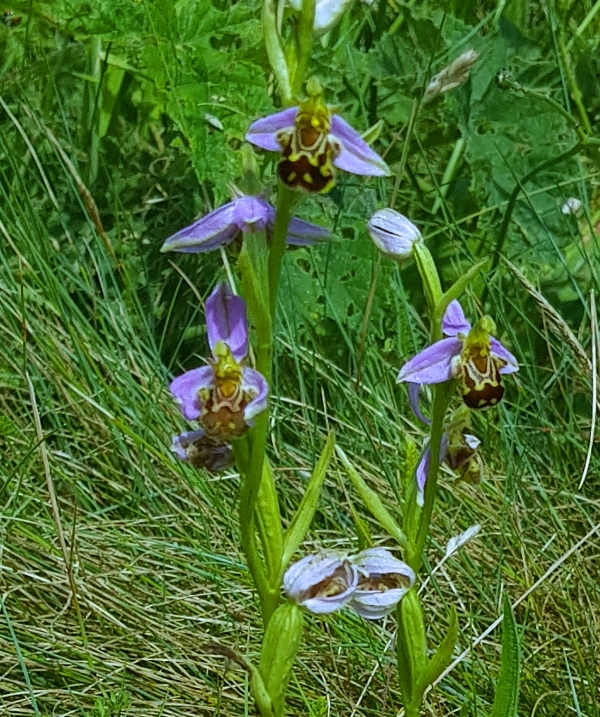 a closer view of the Bee Orchid

Our next destination was Wheeler’s Bay on the eastern side of Ventor which sits on the south coast, it took twenty minute to drive there and a further 10 minutes to find a place to park. We walked down steep narrow lanes until we reached the cliff top, the habitat was not right up there so Guy and myself left Dawn sitting on a bench whilst we walked all the way down to the shoreline. A wide concrete promenade follows the line of the shore for a good way around the bay, we followed it for a while and made a great discovery! 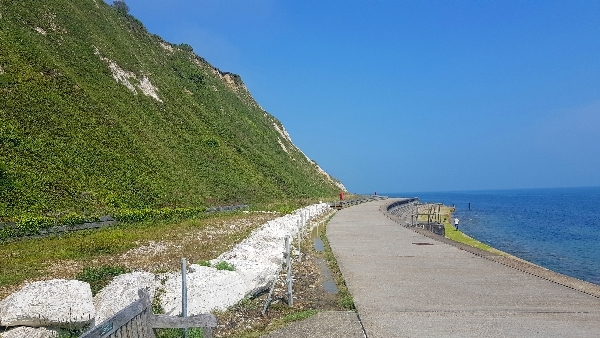 The promenade at Wheeler's Bay, you can see the managed areas for the Glanville to the left of the white rocks

Areas behind the beach had been fenced off and the land looked managed, a few information boards told their story – this was a designated area for the management of habitat for the Glanville Fritillary. Wow! That was encouraging, so we searched and searched, but to no avail. 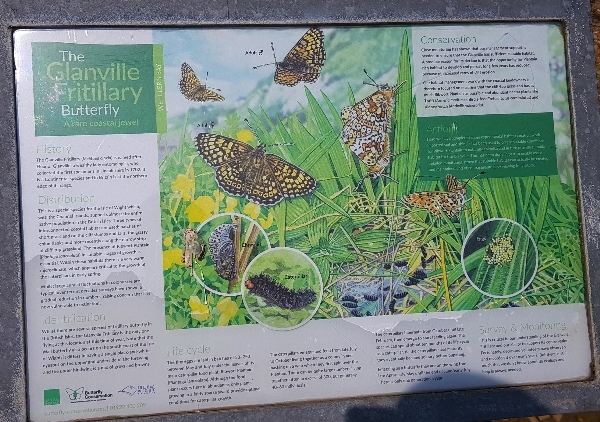 this is as close as we got to a Glanville Fritillary - watch this space in 2022!!

We were in the perfect habitat but at the wrong time, we had dipped again, will we ever see the cursed Glanville??

After our climb back up the cliff steps and pathways we collected Dawn and walked back up to the car, it was now after 3pm and we had to be back at the Ferry around 4pm. Time had run out, we set off and made it back to the ferry at 4pm.

DAWN'S view of our trip today 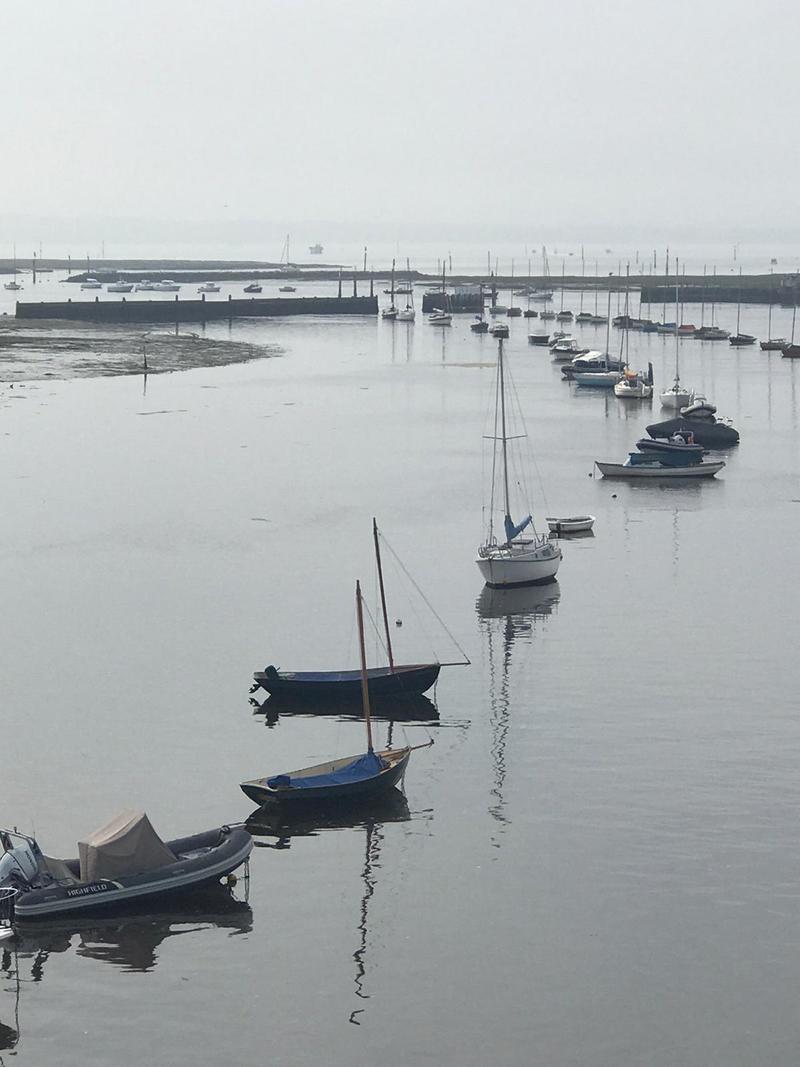 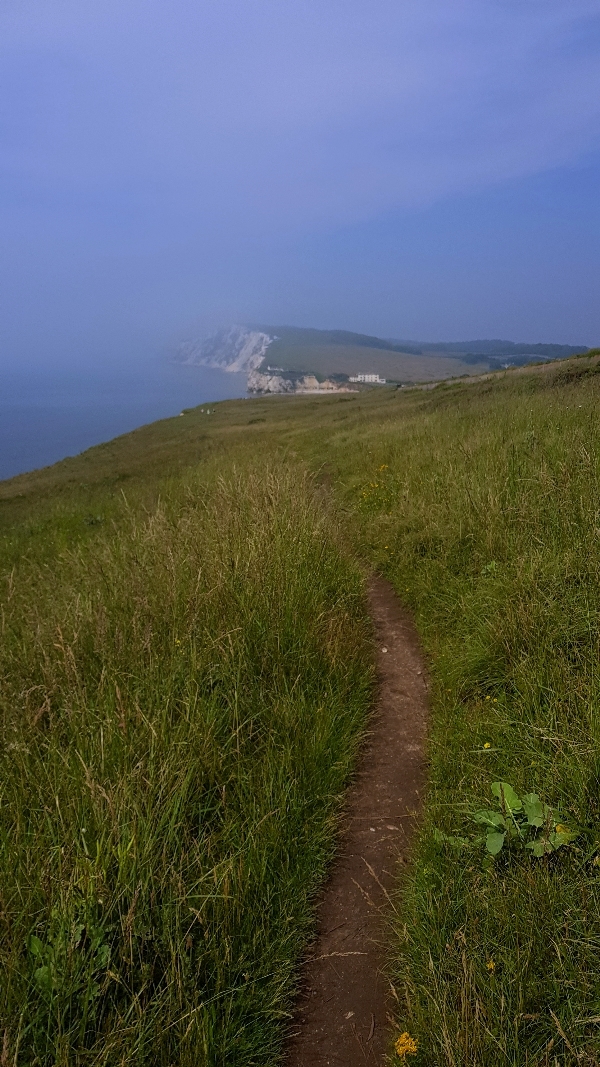 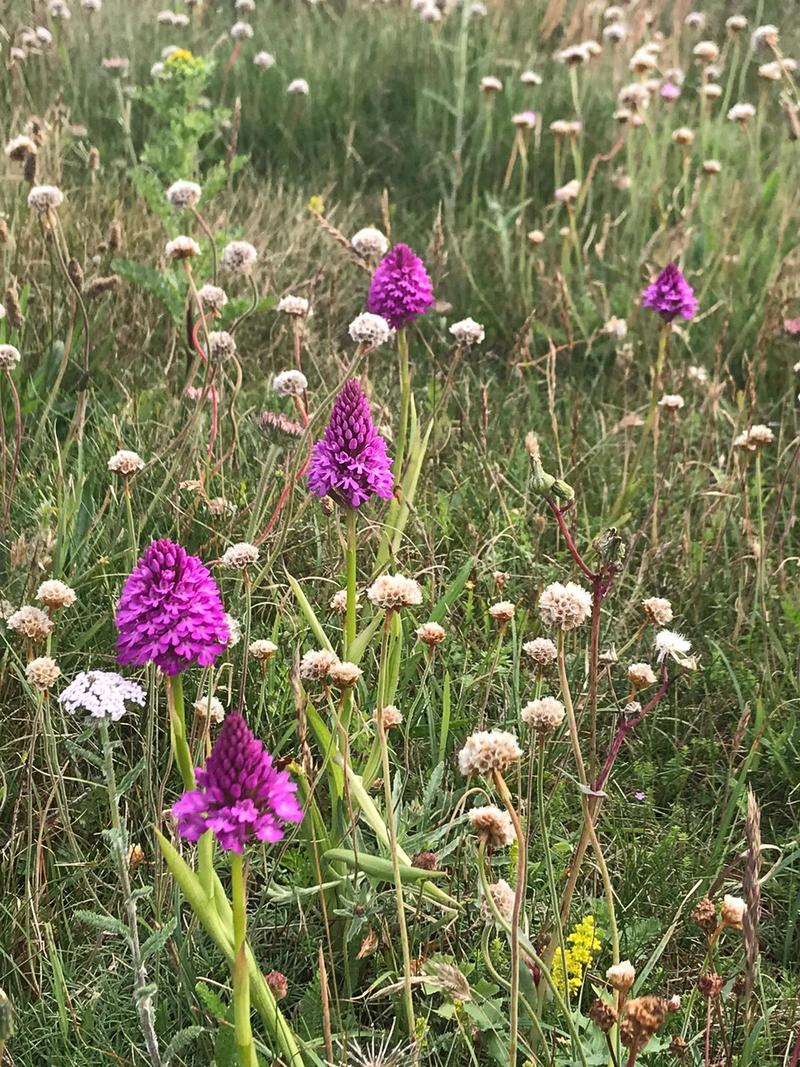 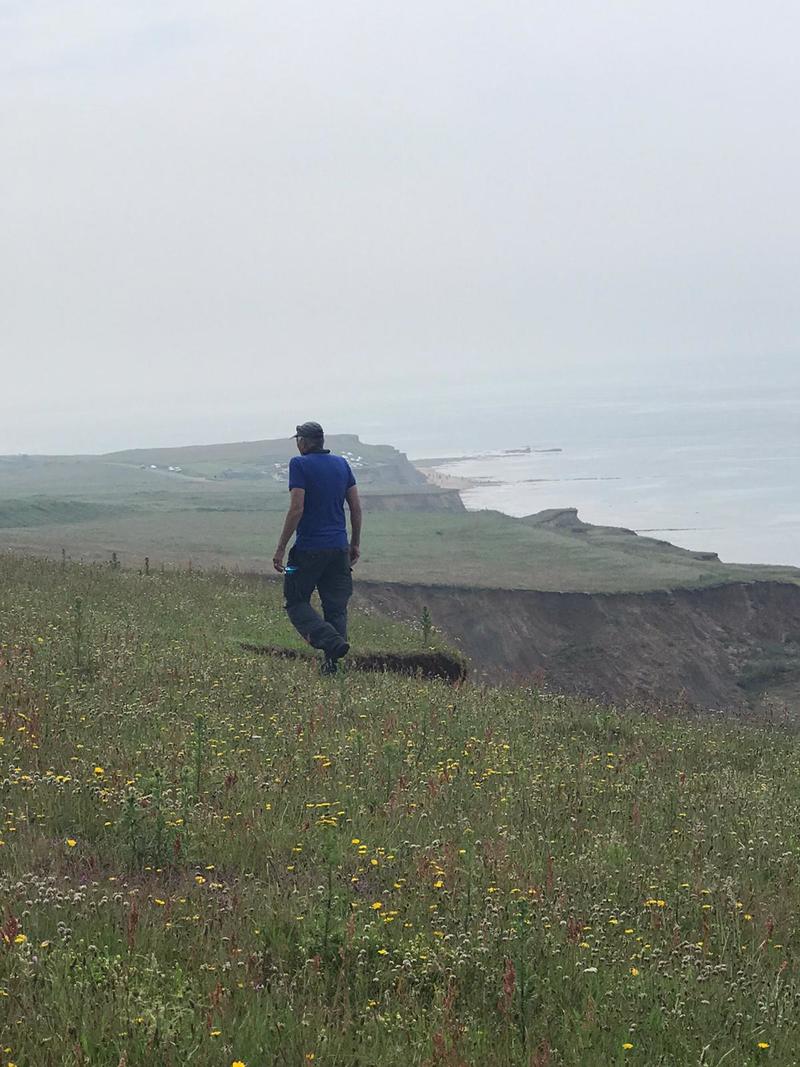 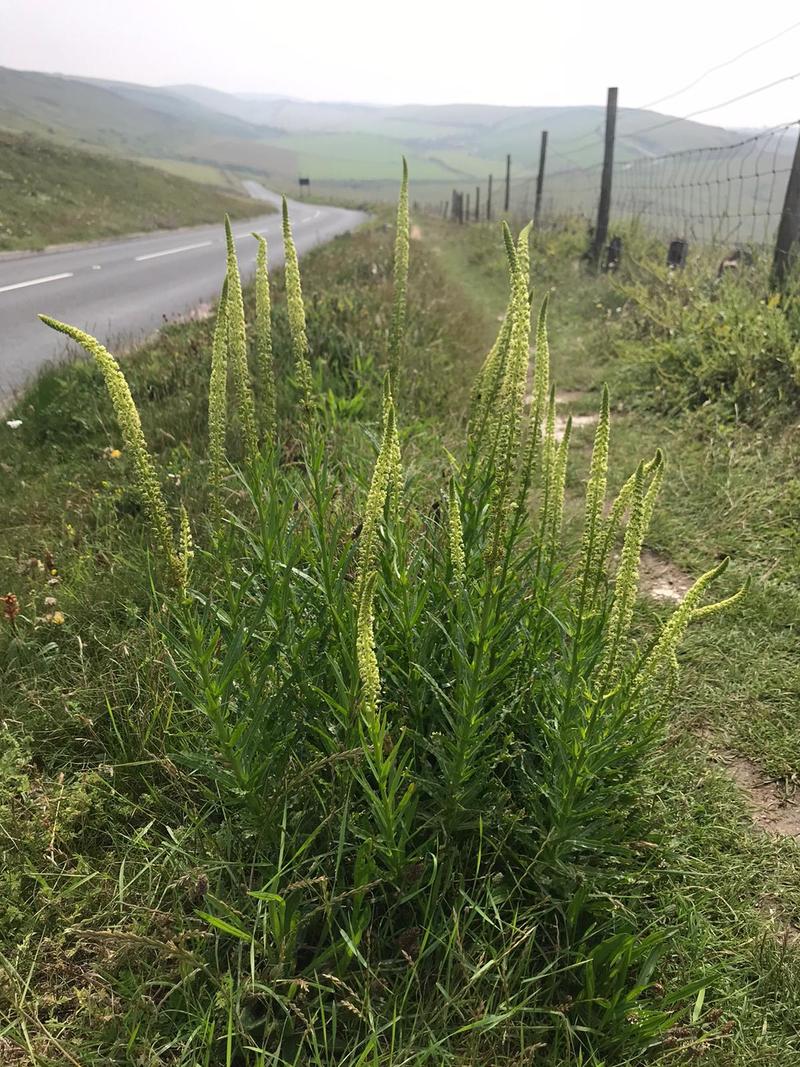 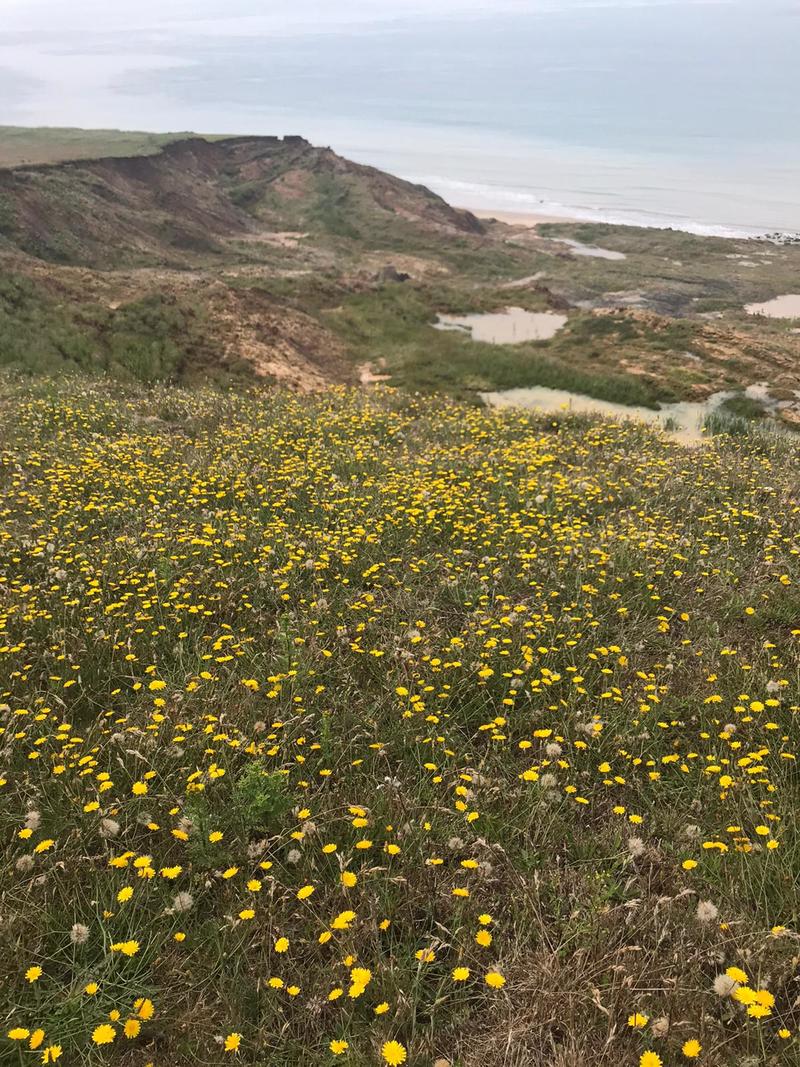 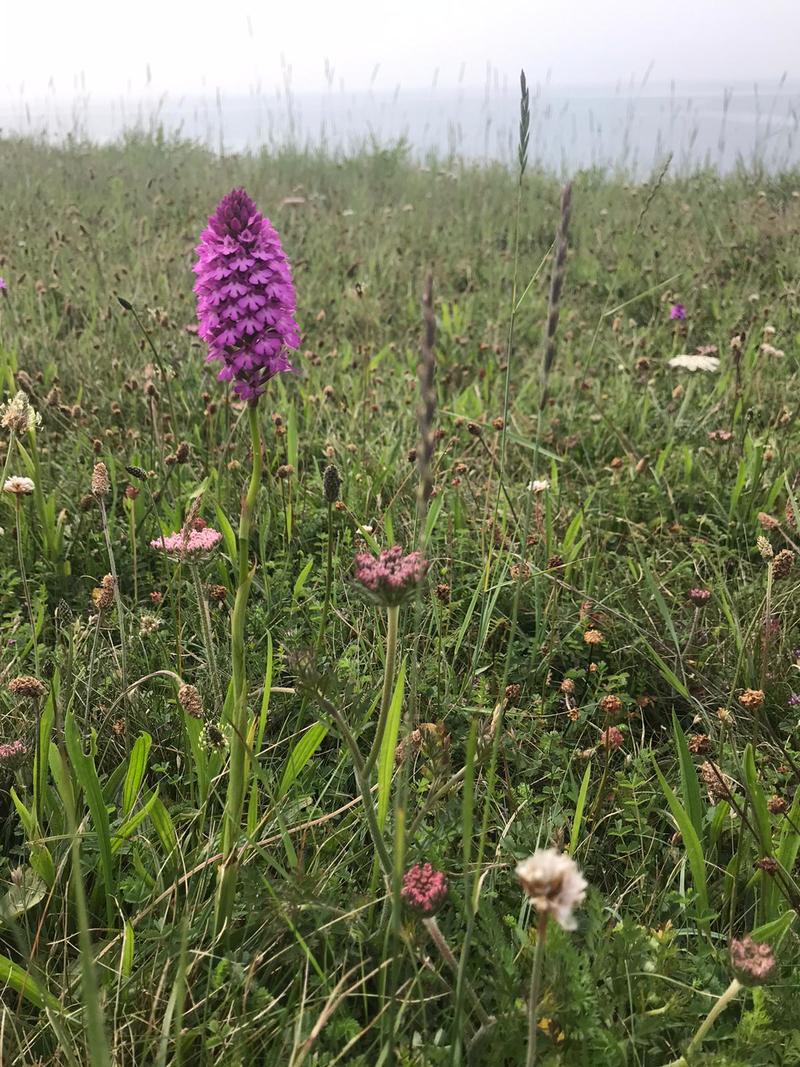 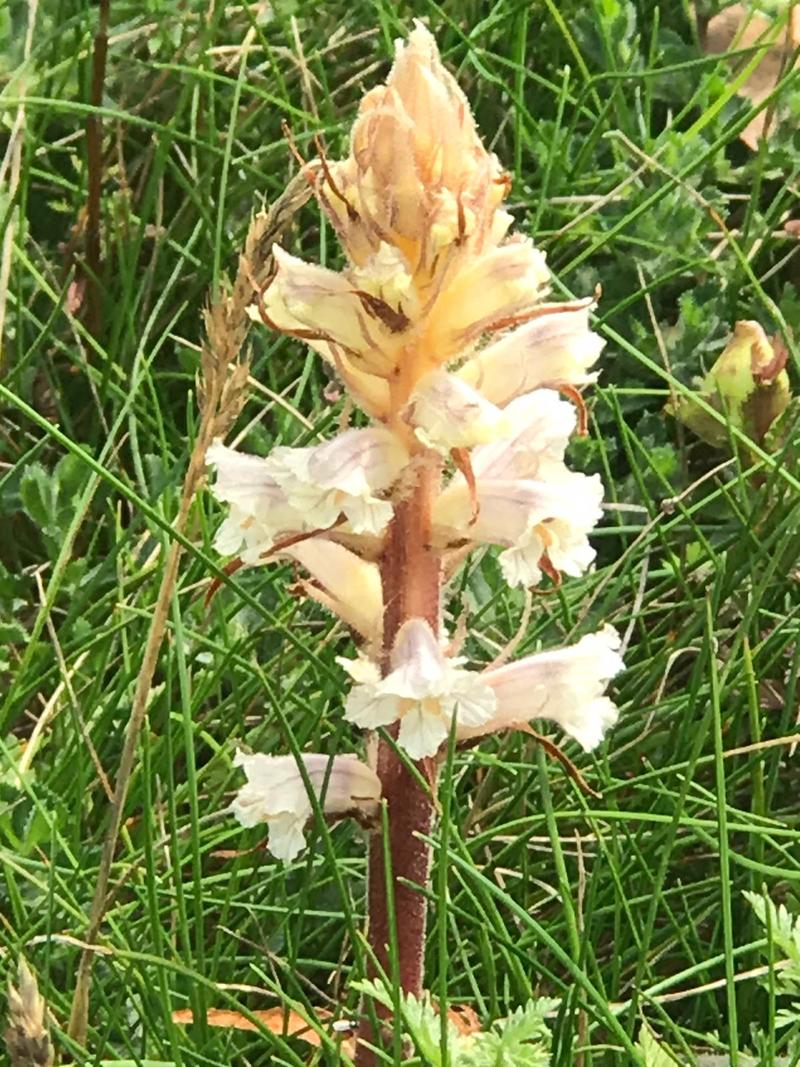 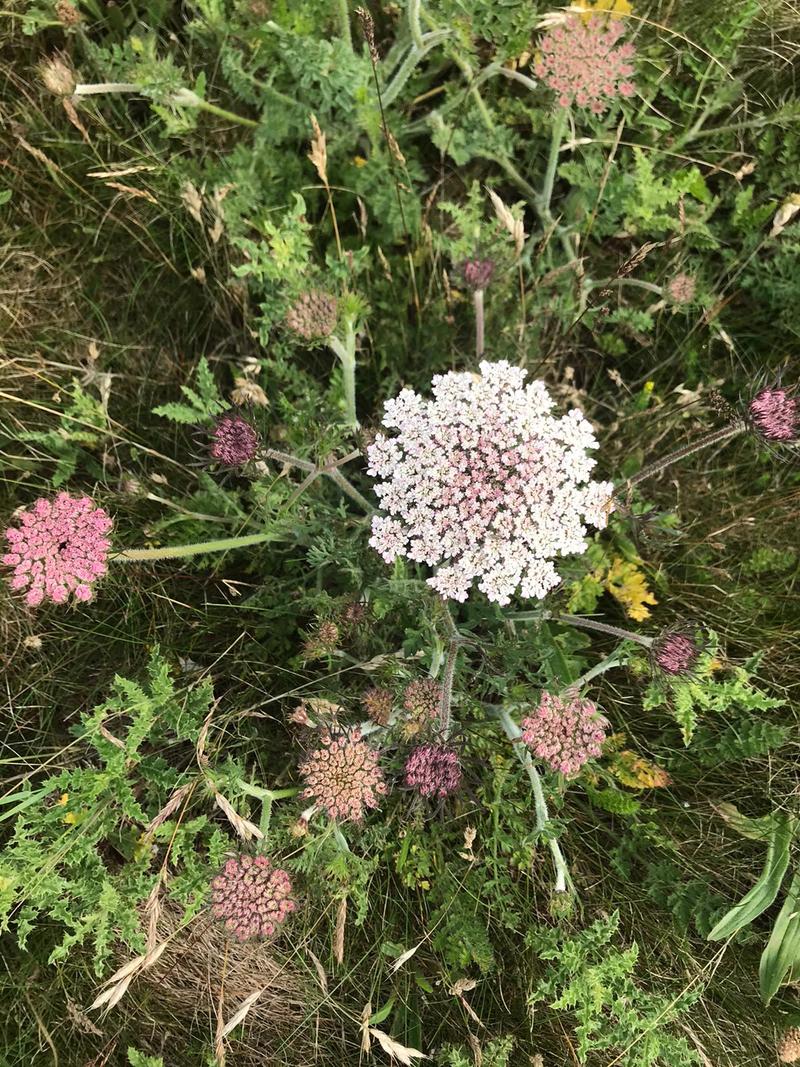 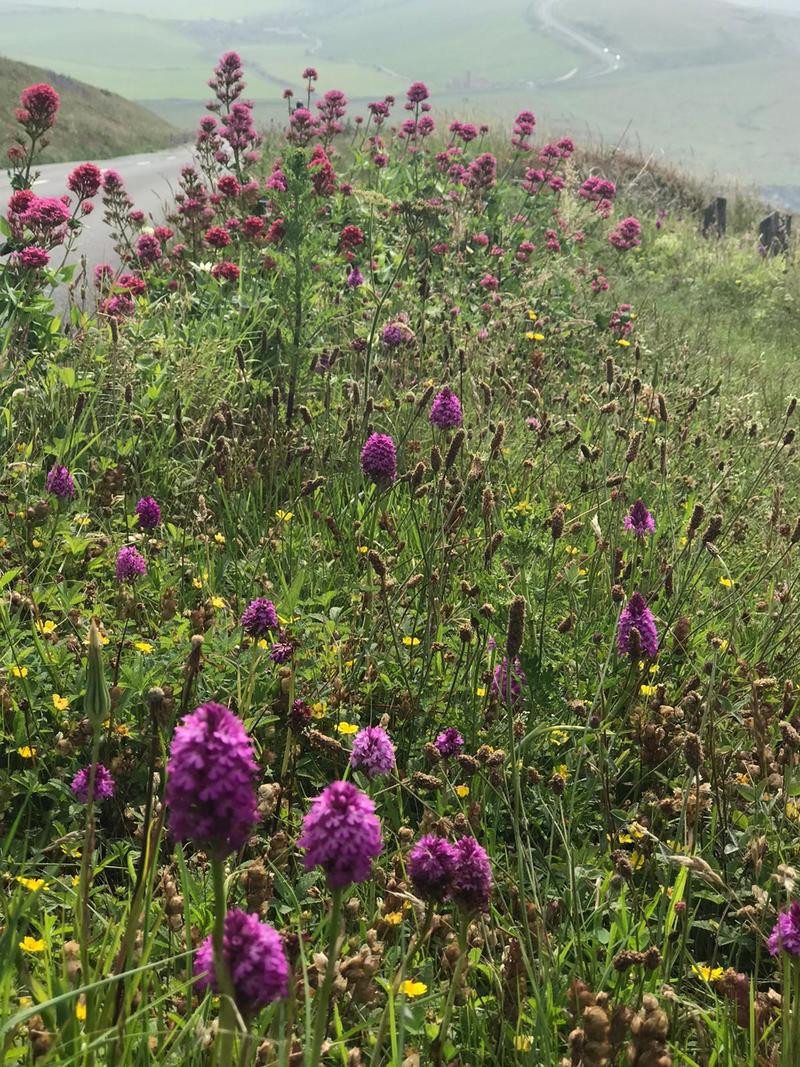 The return journey was uneventful, we arrived back in Stoford at 7:30pm, we said goodbye to Guy  and just crashed out on the sofas watching Tennis on the telly, dreaming of a Glanville Fritillary!!