ALL DAY BIRDING IN WILTSHIRE - LANGFORD LAKES AND SALISBURY PLAIN

Nigel Bleaken came over from Chepstow early this morning and collected me from Stoford, he arrived at 7am. Our intention was to visit Langford Lakes where, for the last few days, an immature female Red-footed Falcon had been showing very well.

It took just over an hour to get there, this lovely Wiltshire Wildlife Trust Reserve lies just 2 miles south of the A303 along the A36 towards Salisbury. We saw Common Buzzard, Red KIte and Common Kestrel along the way. 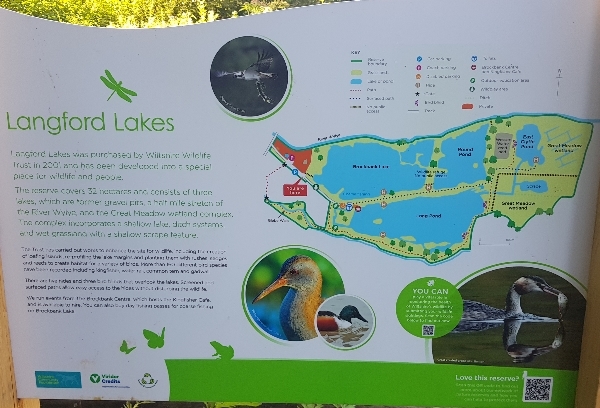 This reserve is really nice and compact, a series of lakes and open lagoons lead you to the 'wild' section where there are wader scrapes, hides, blinds, look-out points and viewing platforms. There are toilets, a cafe, plenty of parking and lots to keep the children occupied. The main pools held the usual 'ornamental' parkland birds, Canada Goose, Mute Swan, Mallard, Moorhen and Coot. There was also a good number of Tufted Ducks, Gadwall and a few Great Crested Grebes. 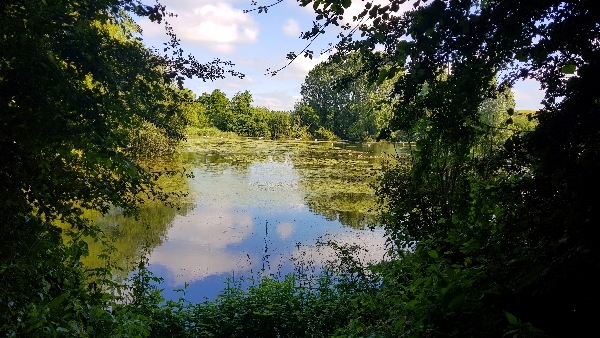 a view of Brockbank Lake

The main central track leads you to the 'Great Meadow Wetlands' where the wader scrapes and the main hide is, as we walked along the track we noticed a mixed flcok feeding in the Hogweed flowerheads, we saw Blue and Great Tits and to our great delight we saw a Marsh Tit, Nigel managed a picture or two but I wasn't quick enough. 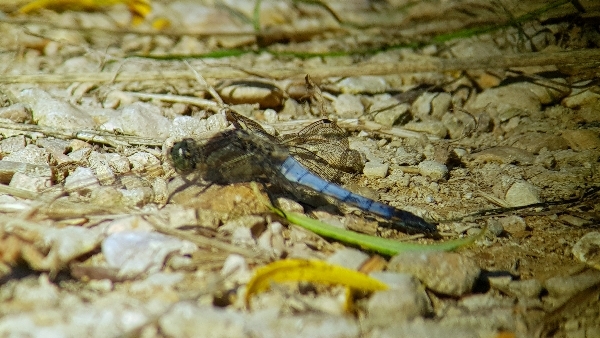 When we reached the Great Meadow view points we met with a few photographers, they told us where the bird had been seen over the last few days so we walked to end of the track near the final hide and waited. 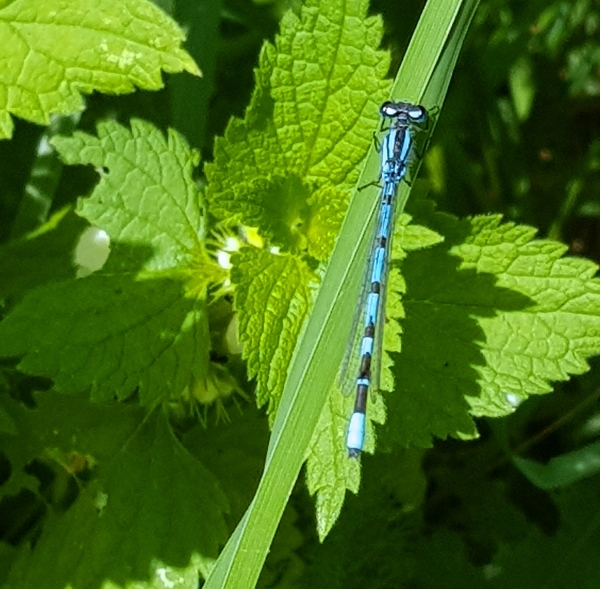 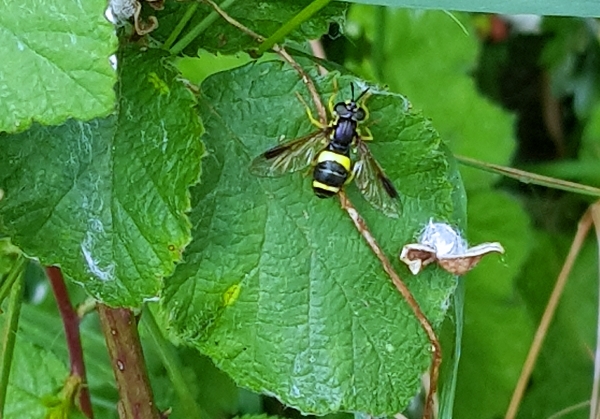 Wihtin five minutes the Falcon appeared, it flew around for a short while, caught a dragonfly and flew up to perch at the rear of the nearest tree. We saw the silhouette of the bird but the light was totally wrong for a photograph, this sequence of events occurred several times over the next hour, we got many record shots of the bird and Nigel managed a couple of blurred flight shots, but the sun was totally in the wrong place and the bird wasn't co-operating!

We took a few pictures of Dragonflies and hoverflies scanned the pools and wader scrapes where we saw a Green Sandpiper and a few Lapwings. 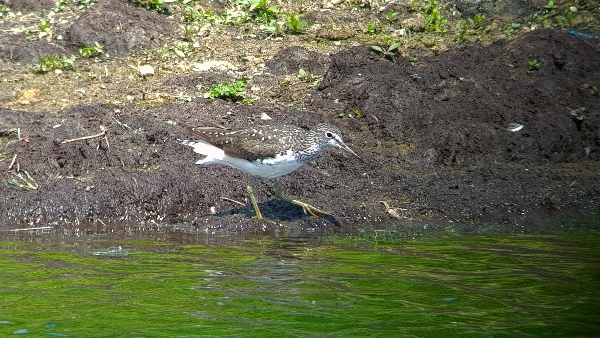 At this stage we decided to take a break and return when the sun had moved aound to the west. During our 2 hour stay we talked to several local birders and got directions to a few sites where it was possible to find Great Bustards on Salisbury Plain which was about 15 miles away.

After a quick snack and a cup of coffee we drove to the edge of Salisbury Plain, passing Stonehenge and then Woodhenge before turning onto a track near Endford Farm. The problem with most of Salibury Plain is that it is controlled by the military with restricted access, it is also a boon for the wildlife because the habitat over thousands of acres is untouched, a totaly green and pleasnat land. 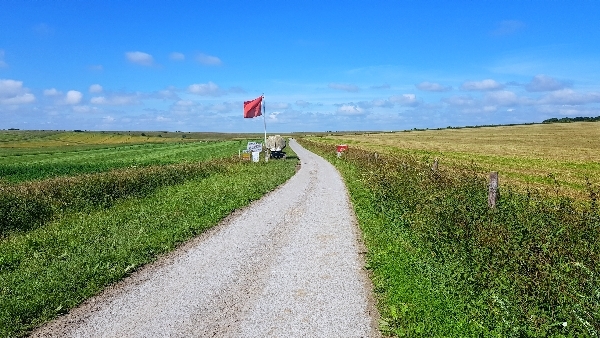 one of the tracks onto the Plains, if the red flag is flying you cannot pass, so we scanned from the flag area

During the working week many tracks and by-ways are not accessible because of 'live' fire from the military training grounds, so we could not pass. From this first track we scanned a recently cropped field, it was covered with corvids, mainly Jackdaws and Rooks with a few Crows, there was also a good number of Red Kites with at least four in view most of the time. 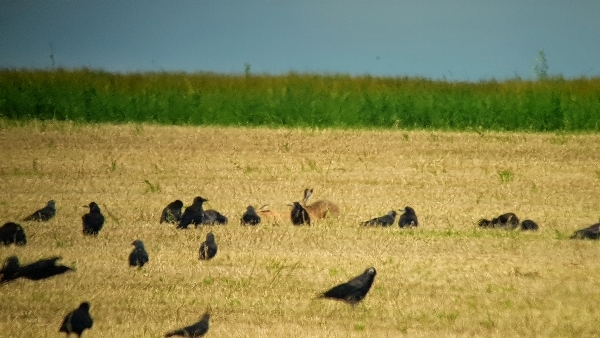 We saw many Lesser Black-backed Gulls and a few Brown Hares, along the hedgerows we saw flocks of Starlings and House Sparrows with a few Corn Buntings thrown in. 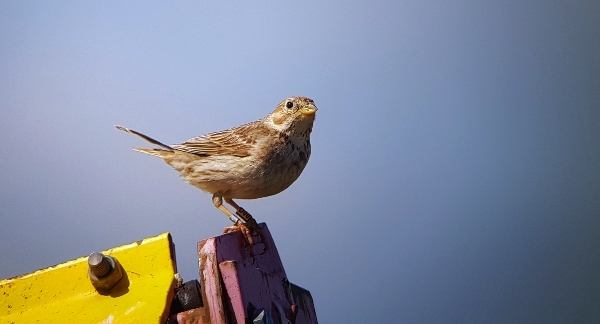 my 'favourite' the Corn Bunting

After searching the landscape and scanning the fields many times we gave up and tried a second place and after that we tried a third track. This third track was called Compton and we found the compounds where the re-introduced Great Bustards were raised and released from, we drove as far as we could and sat near a large puddle a junction of tracks. 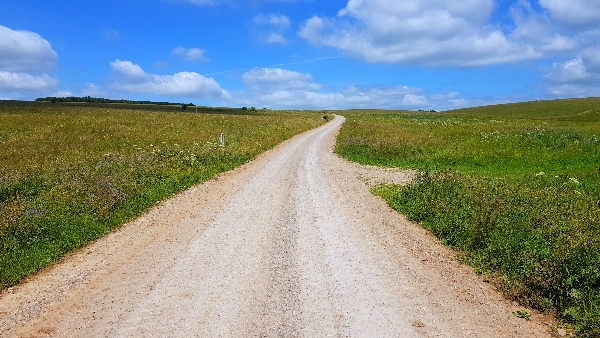 the track at Compton - this area reminds me of Extremadura with fields of wild flowers and birds everywhere, it was fantastic out there today 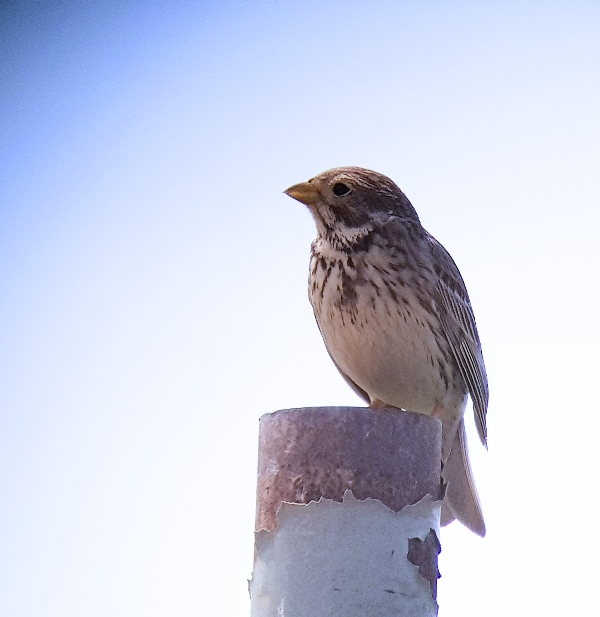 my favourite picture of the day - a Corn Bunting 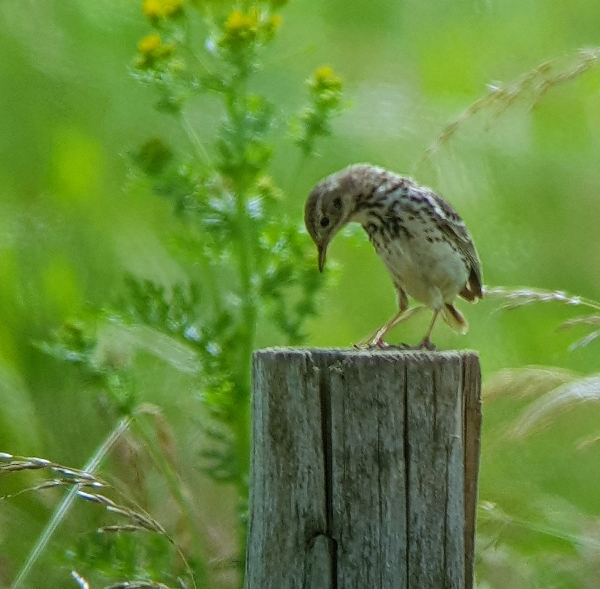 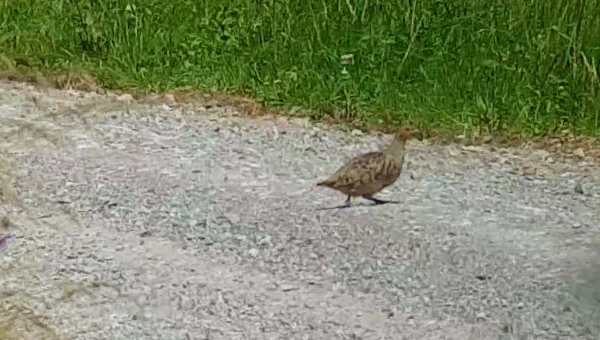 record shot of a Grey Partridge 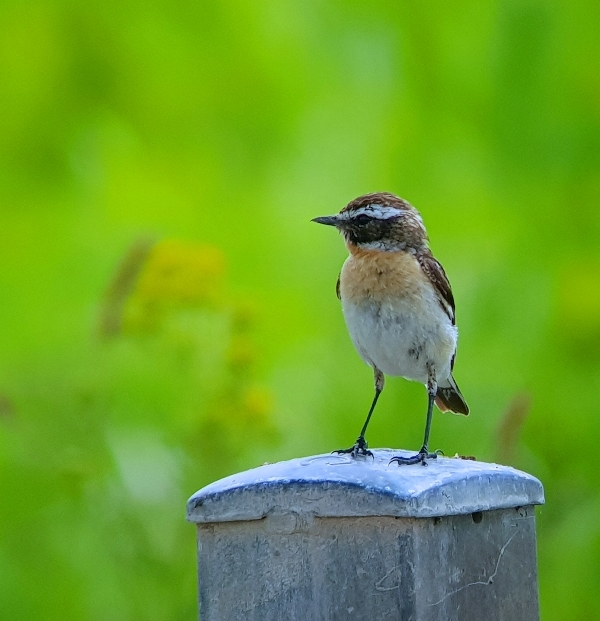 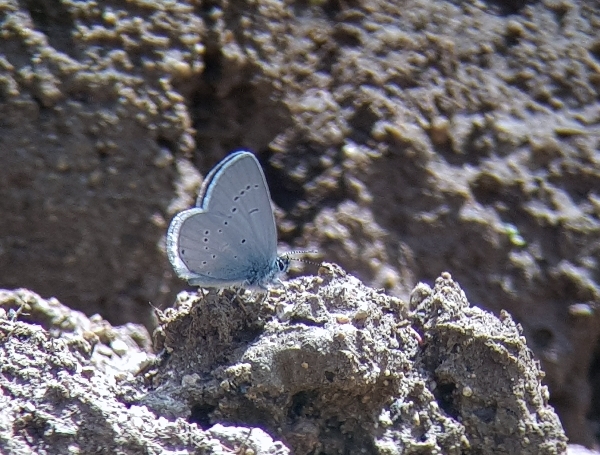 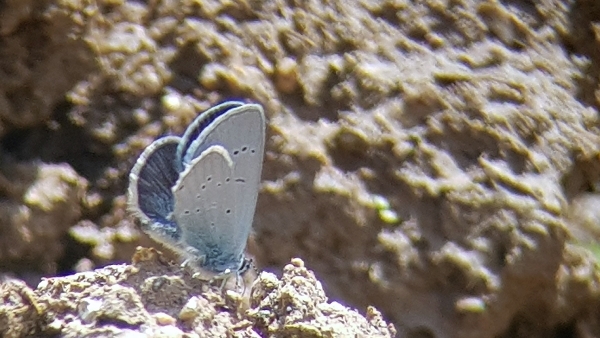 We added our second Grey Partridge to the list just before we left. Again we sacnned the rolling counrtyside for the Bustards, not seeing a single one. 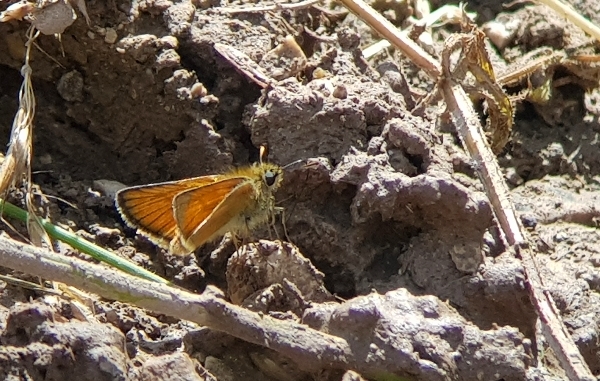 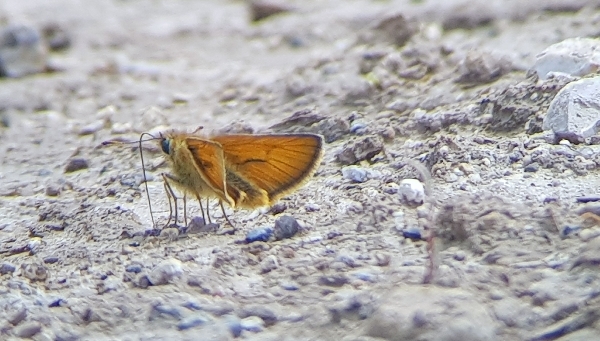 It was 3pm by the time we returned to the Langford lakes reserve and this time the light was perfect, however dozens of other photographers crowded the hide where the Red-footed Falcon was showing.

It was difficult to photgraph in flight but over the next hour we had some excellent views of the falcon perched in the open and in the trees, Nigel wasn't too happy because it was hard to get pictures through other people's heads!! Never mind I think we both went home happy!!

THE STAR OF THE DAY - RED-FOOTED FALCON 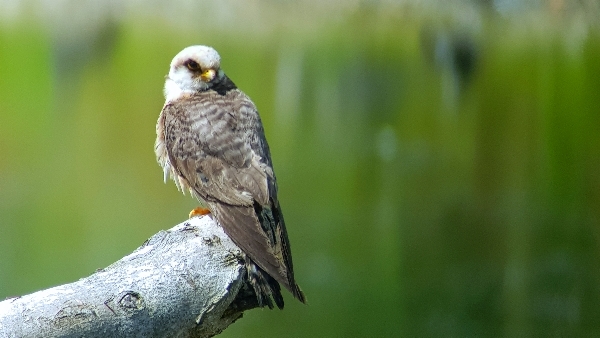 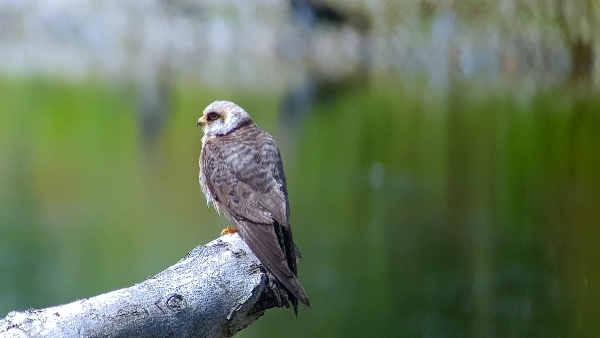 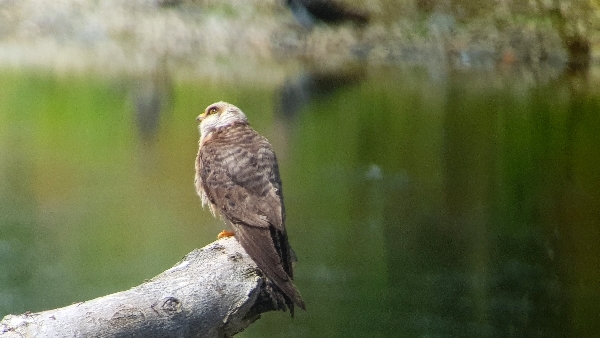 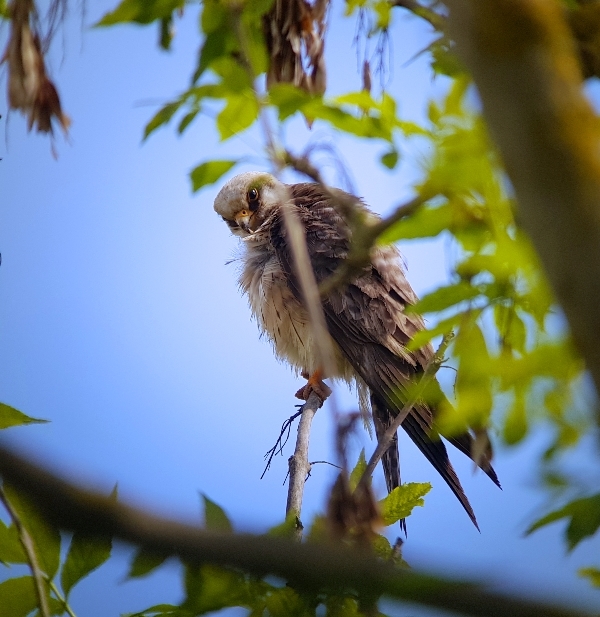 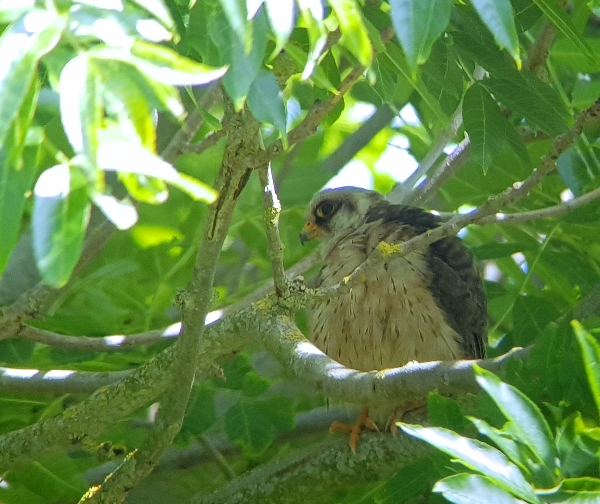 this is where the Falcon ended up, deep in the foliage of a tree, I think it was sheltering from the heat of the afternoon sun.