My first walk into Yeo Valley for quite a while produced a few Damselfly sightings, a small number of birds and not much else. It was quite warm and humid as I stepped out of the door around 10:30am. I noted at least 5 Speckled Bush-crickets on their favourite plant, I noticed that the males are now getting their brown back colouring, just look at the length of the antennae on these beasts, they are exceedingly looooooooooong! 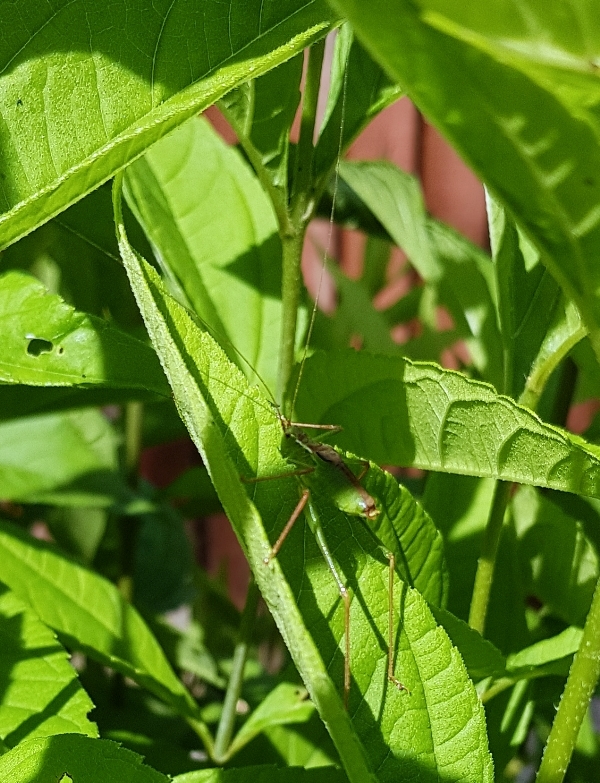 Once in the valley I followed the course of the stream for about a mile, a Treecreeper called after a few minutes, I saw it flit from one tree to another and was quickly lost in the tangle of foliage. A Common Buzzard was calling for quite a while, probably one of the two juveniles that have fledged from the nest in the meadow next to our flat.

Many Demoiselle Damselflies were on the wing, I think at this time of the year the Banded species outnumber the Beautiful species, both are equally stunning with their iridescent shine of midnight blue (males) and emerald green (females) they adorn the bushes like natural gems glistening in the sunlight. 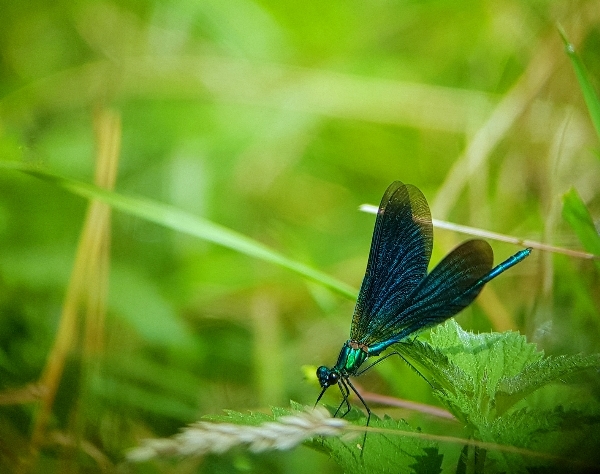 a male Banded Demoiselle Damselfly, the difference between Beautiful and Banded is obvious in males but not so in females

On my return walk I flushed a covy of Red-legged Partridges, eleven of them scurried off ahead of me. I heard Great Spotted Woodpeckers calling a number of times, as well as Chiffchaff and a party of Blue Tits. 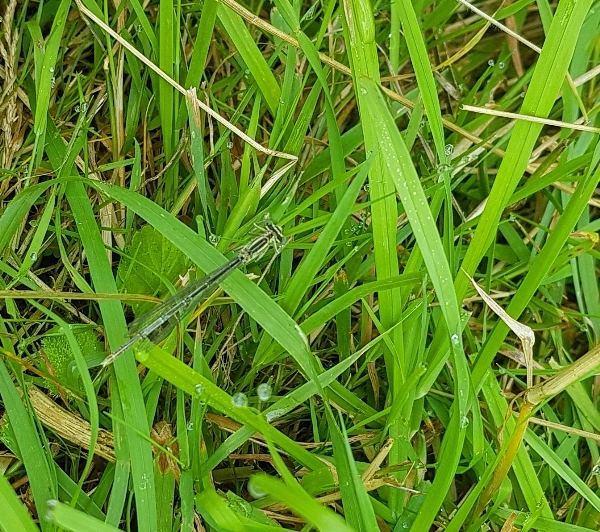 a record shot of the White-legged Damselfly

I searched for Dragonflies but only came up with White-legged Damselfly which was a new year tick for me, a Blue species of Damselfly flew off before I could identify it. M<y last sightimng of the visit to Yeo Valley was that of a Common Blue Butterfly, however it was a female which has a very littleamount of blue in its markings, see for yourself; 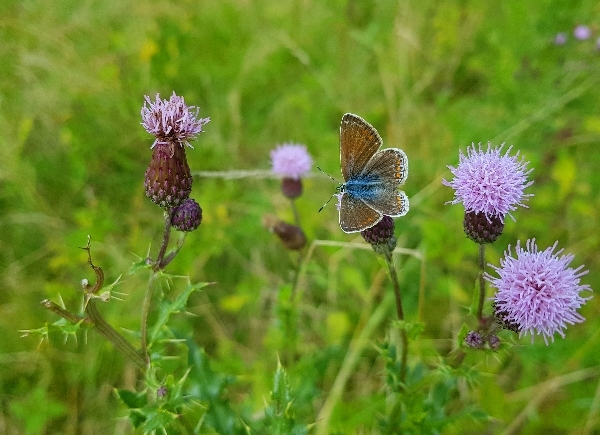 For my afternoon visit to Alners Gorse I was joined by Dawn, I knew our visit would be short-lived as she gets bored of standing around, always waiting for my 'target' butterfly to arrive. We were lucky today, I managed to see what I wanted to after just 1 hour, we stayed for another 30 minutes after that. 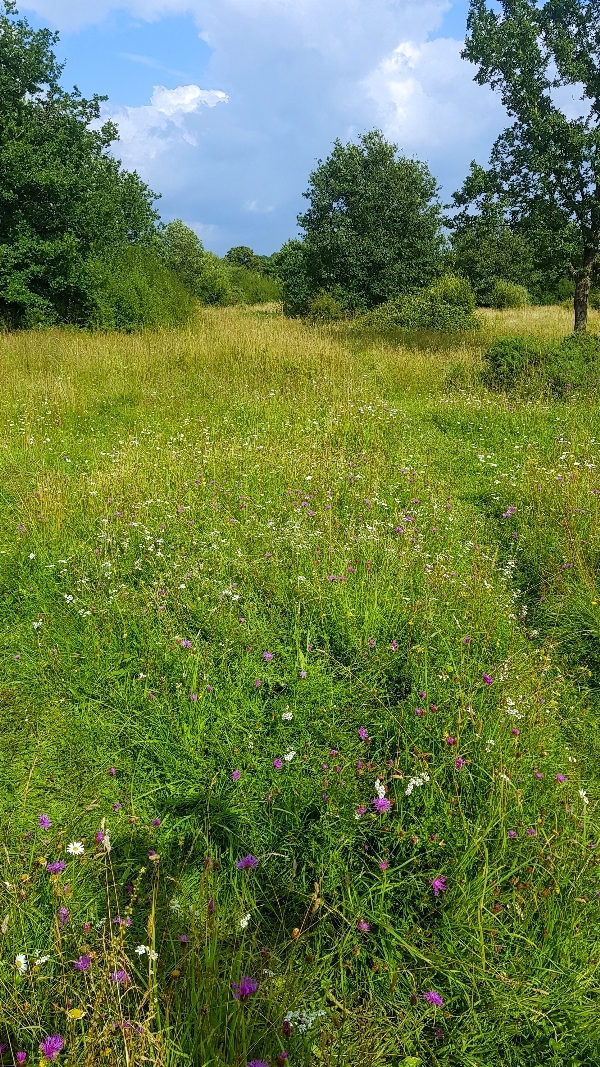 The sun was shining as we arrived and many butterflies were on the wing, dozens of Meadow Browns and Gatekeepers flitted about with the odd Brimstone, Large, Small, Marbled and Green-veined Whites, Red Admiral, Peacock and Small Skipper all went onto the day list.

We reached the best ‘designated area’ where to look for Hairstreaks, Purple and Brown that is, the White-lettered is found at the other side of the reserve along a row of Wych Elms. I quickly found several Purple Hairstreaks, they appeared to be taking nectar from the ripened berries on the alder buckthorn bushes, I found one with its wings open, click click!! In the can, but unfortunately it was the less colourful female. Doh! 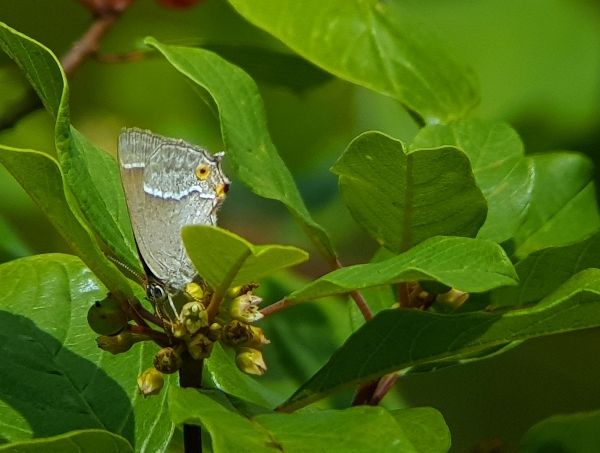 the underside of a Purple Hairstreak 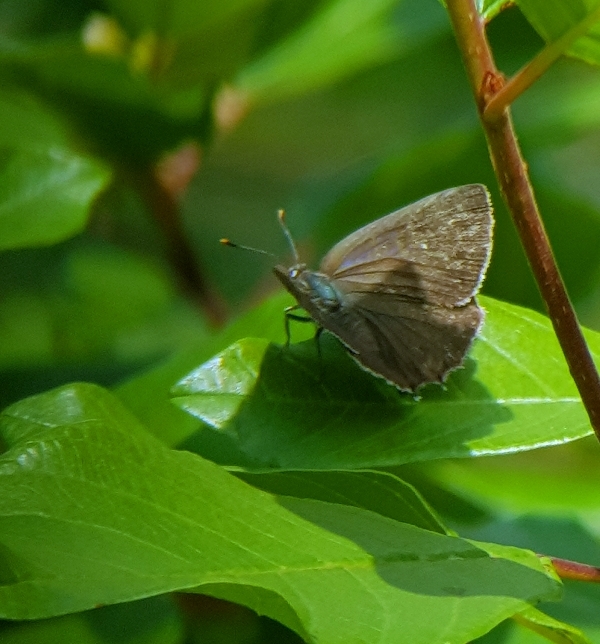 the not so purple upperside of the female Purple Hairstreak, you have to have the light just right to catch the irridescent purple colour

Just as Dawn was getting restless, with little murmuration’s spilling from her lips, my target butterfly appeared in the same buckthorn bush as the Purple Hairstreaks!  A BROWN HAIRSTREAK was flitting about in the canopy, then it settled, I quickly got the scope focused on it and …..shazam, in the can! I watched this little beast for a while and got many pictures of it including a couple of opened winged shots, once again I had the wrong sex in my sights, it was the less colourful male this time! 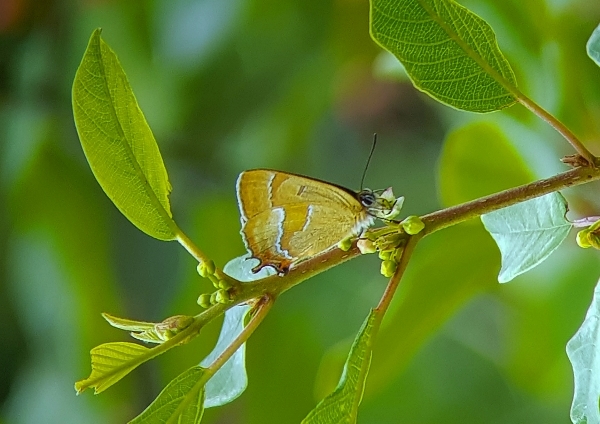 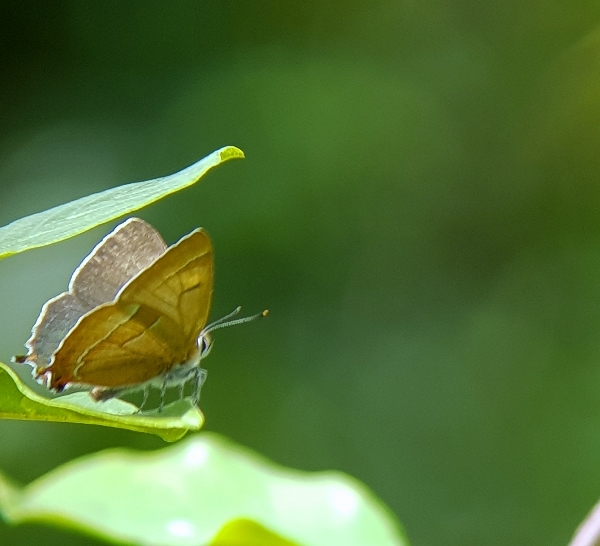 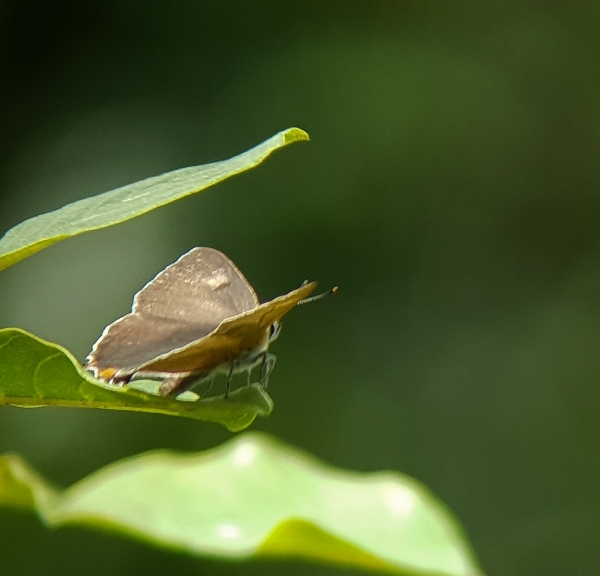 As we walked back to towards the entrance a guy told us that he had just seen a Clouded Yellow butterfly! Wow! This lemon-coloured migrant has been very scarce in the UK this year, so I was excited when I relocated the bright, foreign beauty, it was favouring an area full of scabious/knapweed, I got a reasonable picture of it too. Job done, so off we went, Dawn was happy to be leaving. 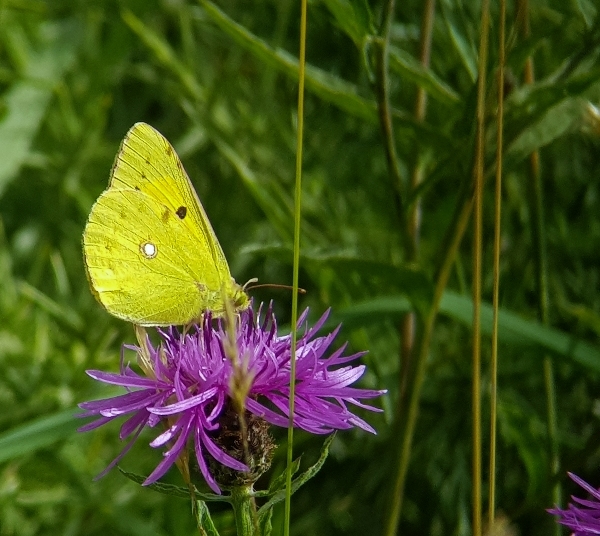 my first sighting of the migrant Clouded Yellow Butterfly in 2021

We saw a Red Kite as we passed through the village of King’s Stag as we headed for home. 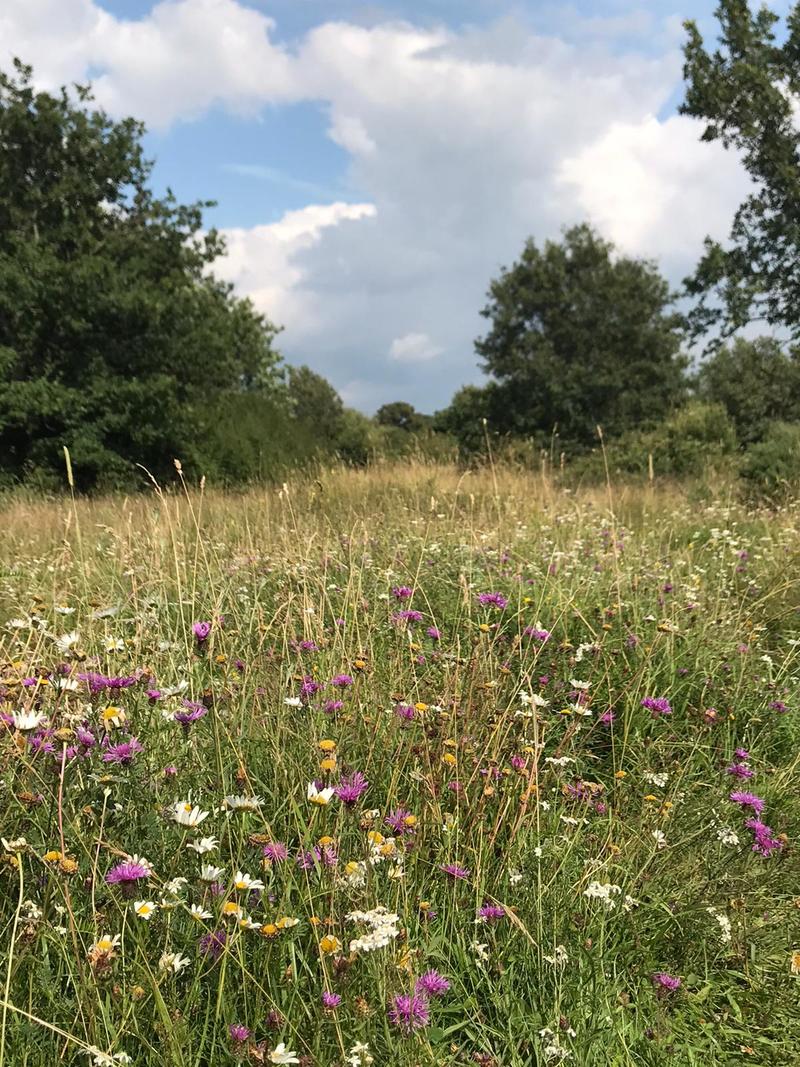 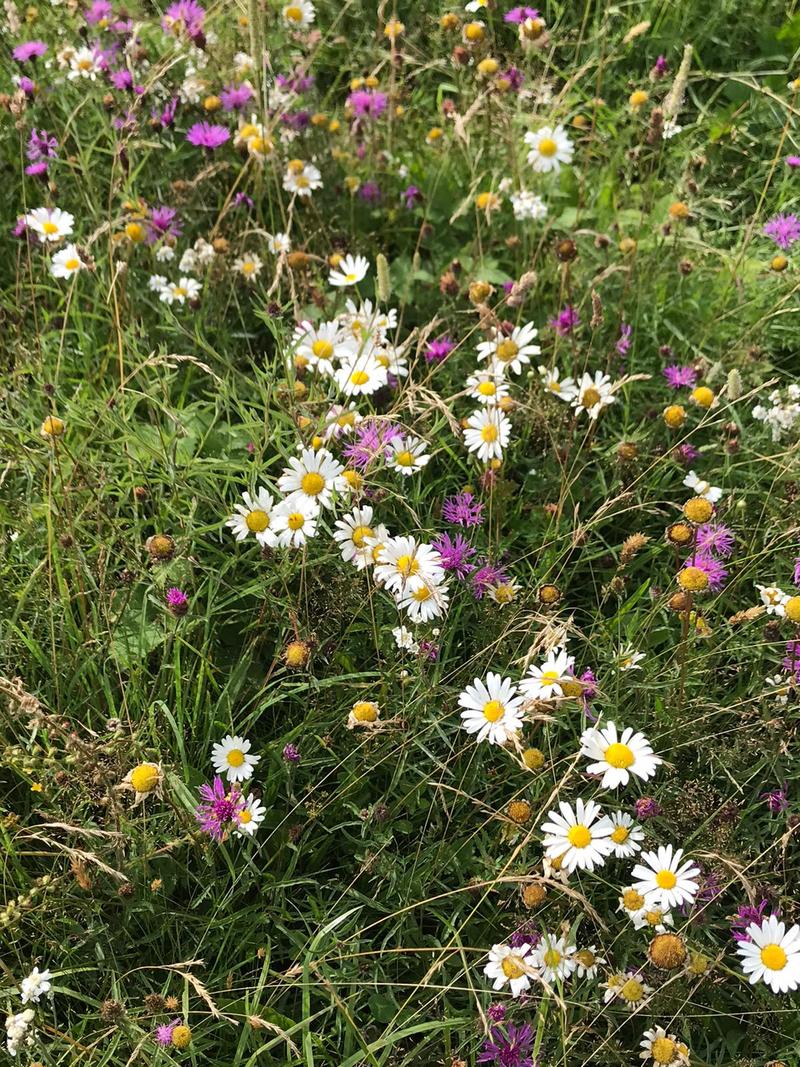 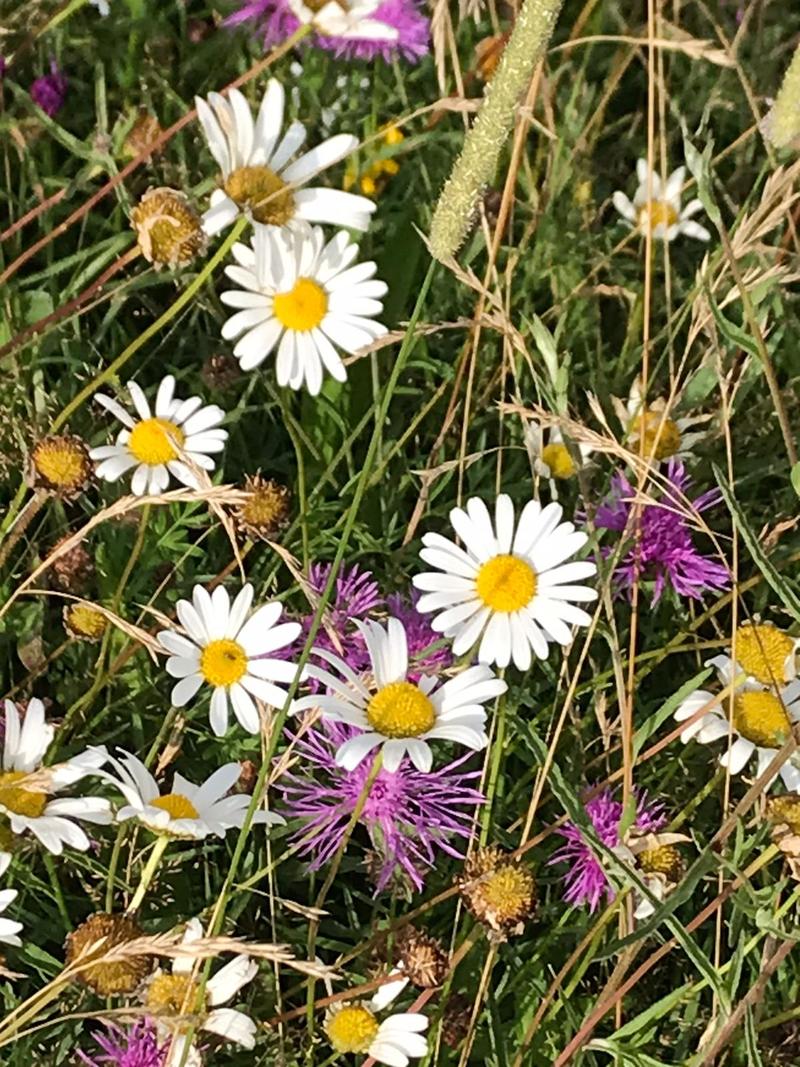 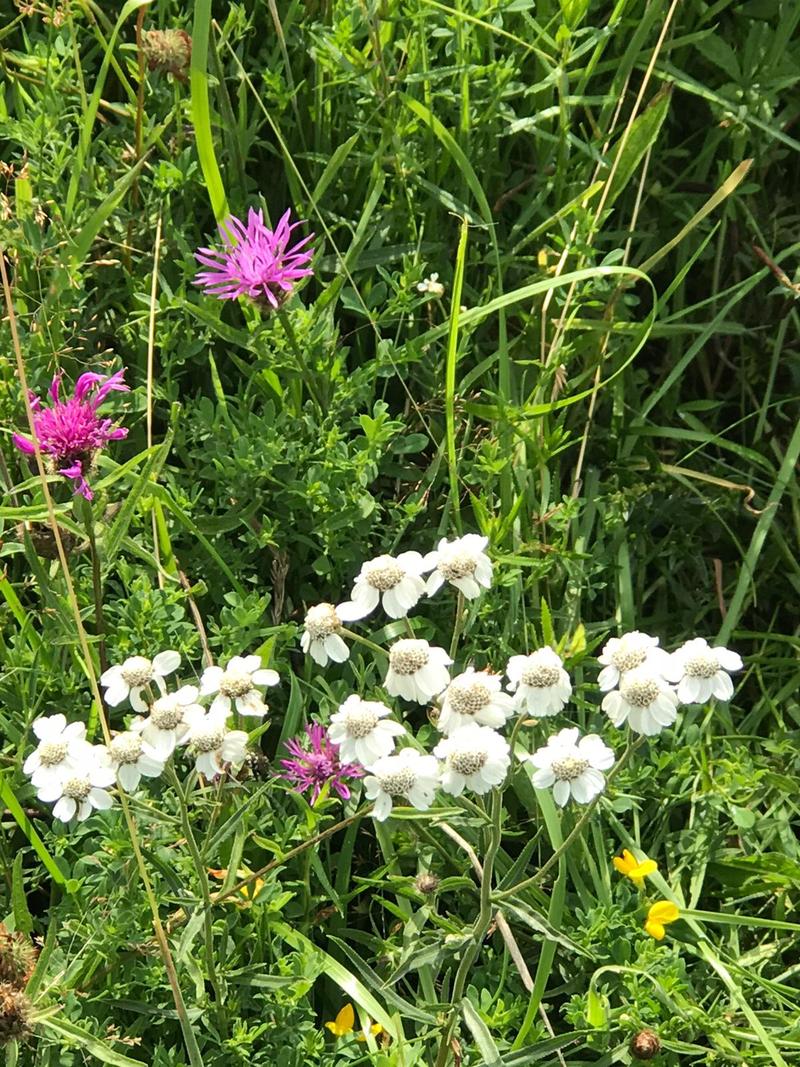 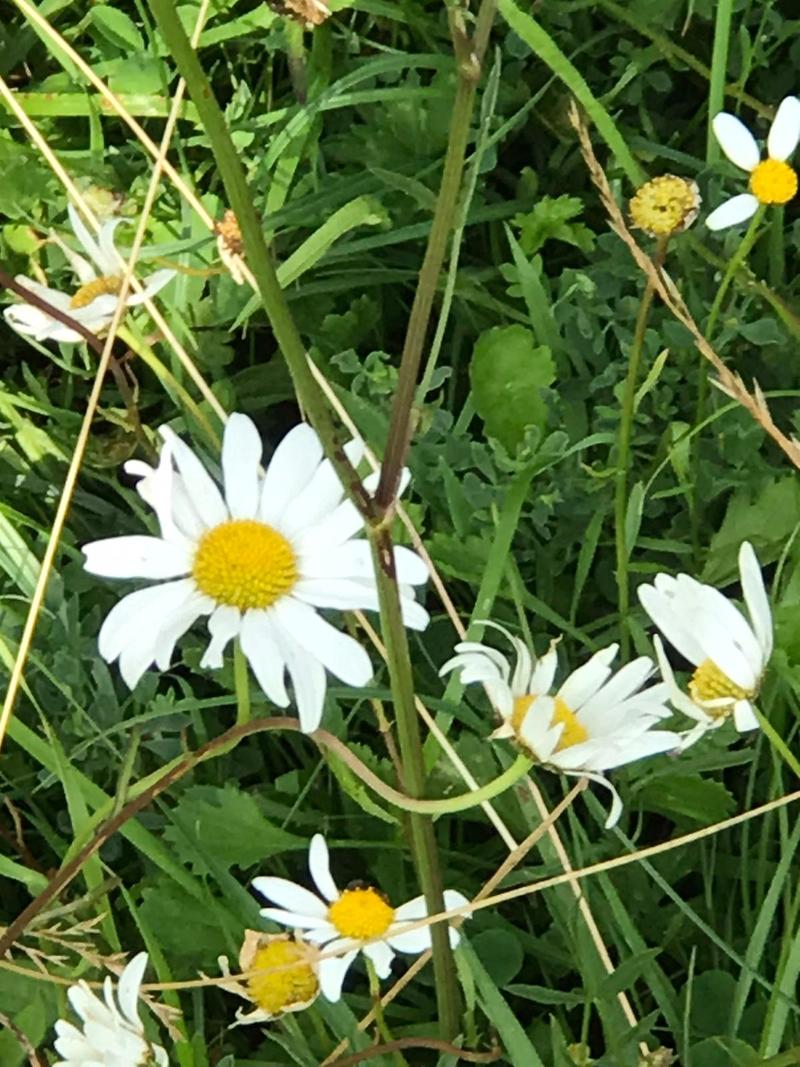