FONTMELL DOWN AND ALNERS GORSE - Skippers and Hairstreaks

We had a bumper butterfly day today!! I was with Guy Campbell and everything went to plan for a change, we went to all the right places at the right time and saw dozens of butterflies, I couldn’t believe it.

Guy collected me at 8am and we drove straight to Fontmell Down, a butterfly reserve near Shaftesbury, Dorset which is managed by the Dorset Wildlife Trust. We were after the Silver-spotted Skipper which is found at Fontmell Down and August is the prime time to find them.

I love this reserve for its beautiful landscapes, breath-taking views and its iconic butterflies, the wild flowers carpet the closely cropped turf which is grazed by a large herd of cows. As we walked down from the car-park, we listed Common Blue, Gatekeeper and Meadow Brown, soon we were in the right place to look for the Silver-spotted Skipper. 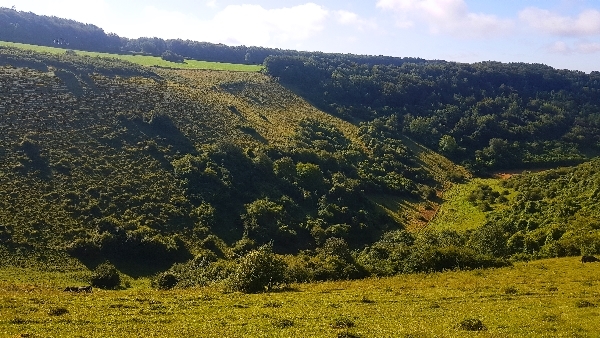 The steep sided hills formimg a beautiful lanscape at Fontmell 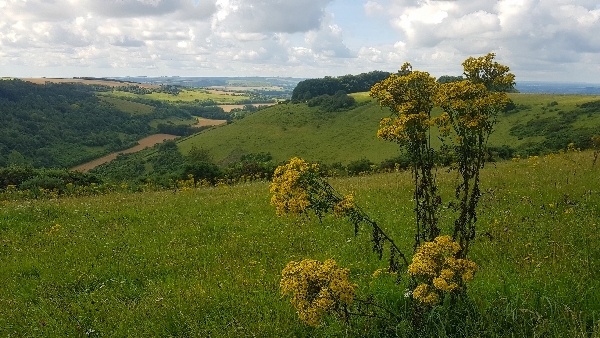 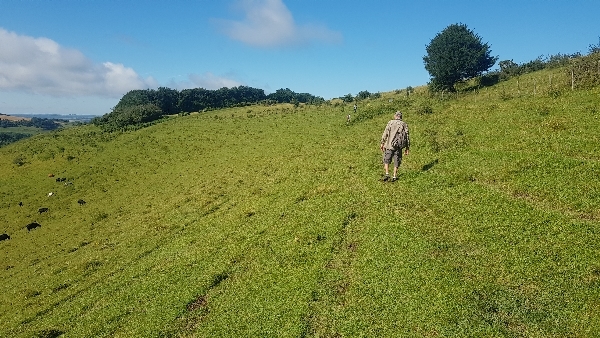 Guy walking along the terraced pathway at Fontmell

Finding the right place was easy but locating the butterfly was another story, we walked the steep hillside which has terraced pathways littered with cow pats, one or two other people were doing the same thing. Guy happened to know all three of the other people on the reserve and it was one of these that called us over and showed us a resting SILVER-SPOTTED SKIPPER. It was a fresh looking specimen and we all thought that maybe it had just emerged, it was very obliging and hardly moved a muscle even when Guy lay down to take its picture. 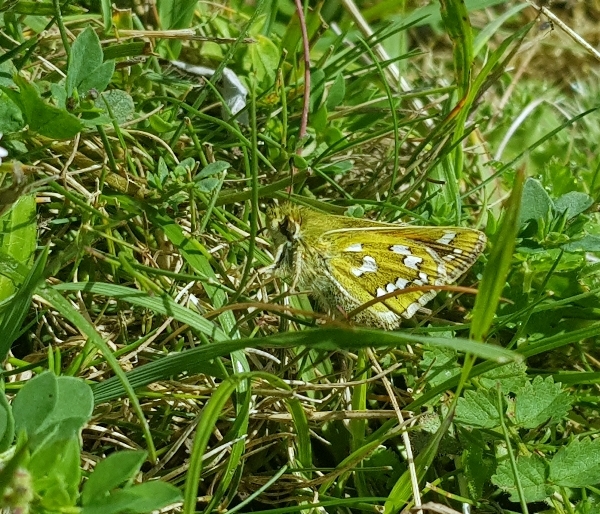 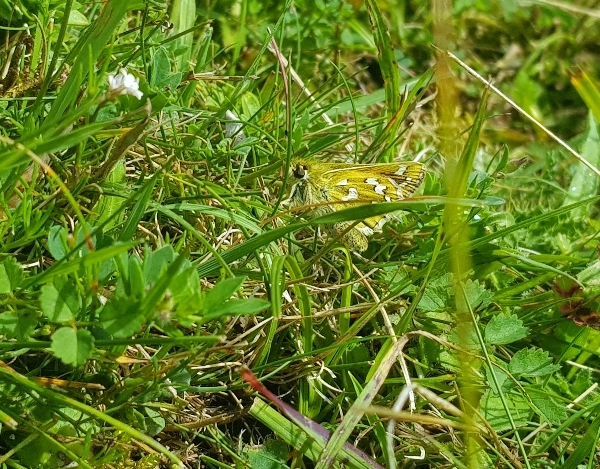 After our early success we search for more species finding: Ringlet, Chalkhill Blue, Painted Lady, Dark Green Fritillary, Red Admiral, Small Tortoiseshell, Small Heath, Green-veined White and Large White. We spent another hour or so walking along the terraced pathways without seeing another Silver-spotted Skipper and it was not until we were about to leave that we finally found our ‘own’ specimen. 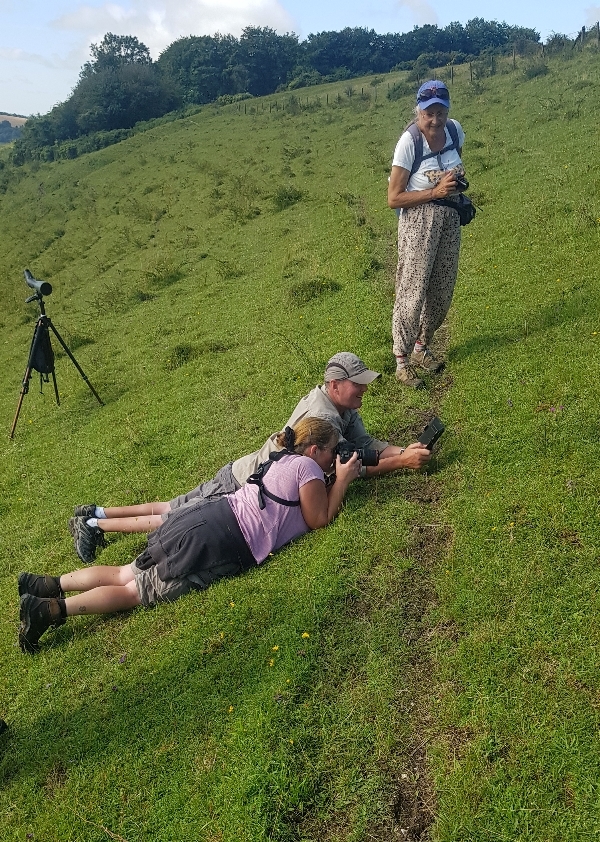 Guy getting to grips with the Silver-spotted Skipper

It was almost 12 noon by the time we got back to the car park, I cracked open my lunch box whilst Guy drove us to Alners Gorse, another superb butterfly reserve in Dorset. It took about 20 minutes to get there. Guy ate his lunch on arrival before we set off down into the reserve. Alners is a fantastic place, it has well managed rides through thick scrub and woodland, it is a haven for many butterfly and bird species, especially for Hairstreaks and that it what we were after today. 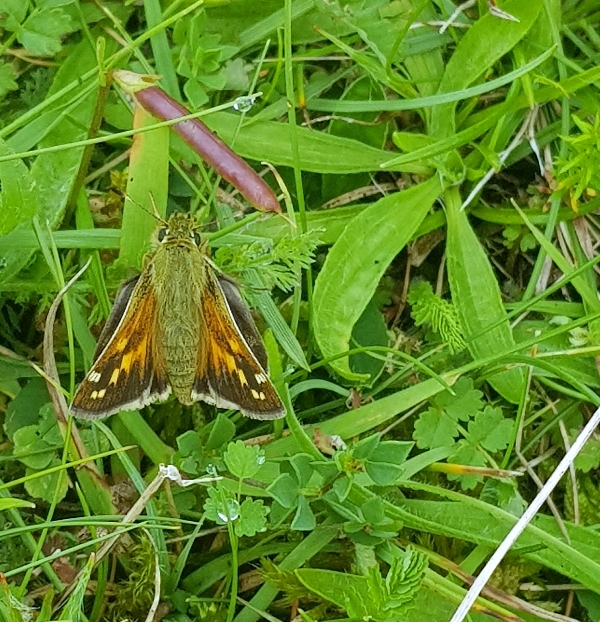 the second Silver-spotted Skipper we found, showing its upper-wing beauty 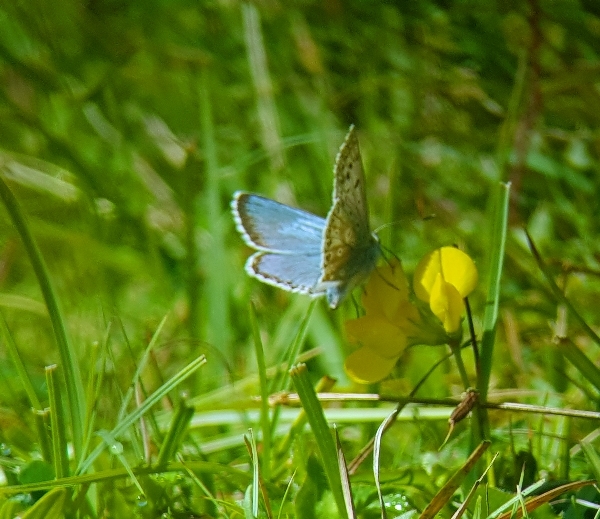 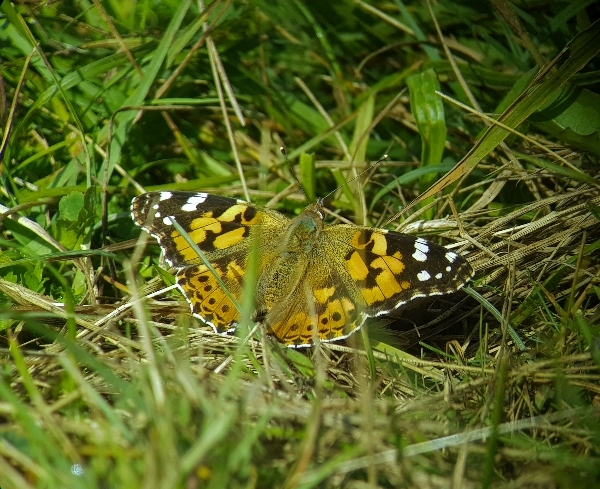 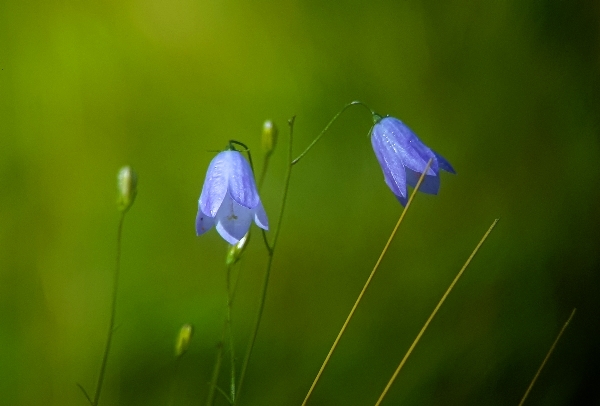 the dainty Harebell flower was very common at Fontmell 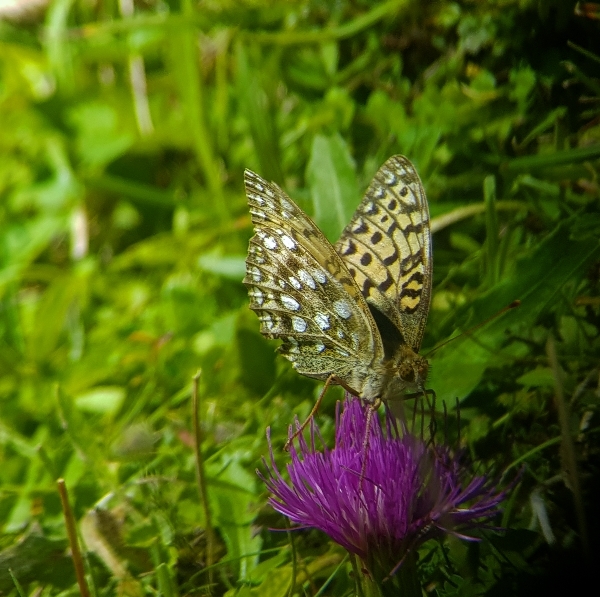 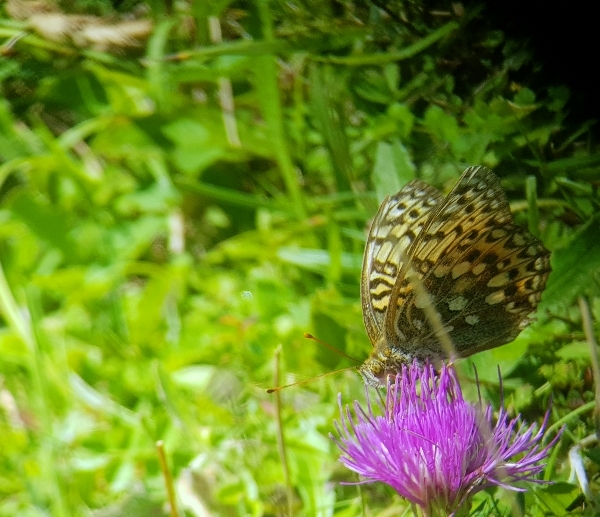 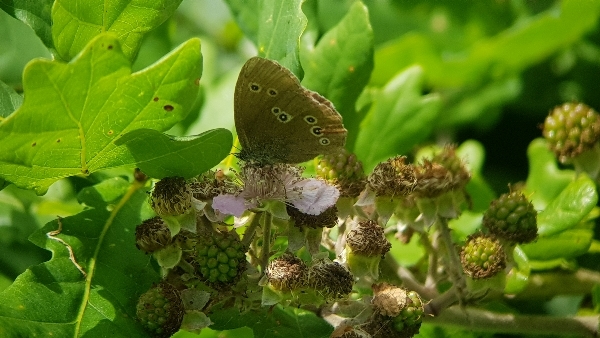 a Ringlet seen at Alners Gorse

We added Peacock Butterfly to the day list as we walked down the main path. Along the first ride we entered Guy spotted a White-letter Hairstreak sitting on a bramble flower more or less at eye-level! Wow! That was a great sighting, these canopy dwelling species are usually hard to find at lower levels. A second one then appeared, both of them were not looking their best as it is close to the end of their flight period, but a welcomed sight nonetheless. 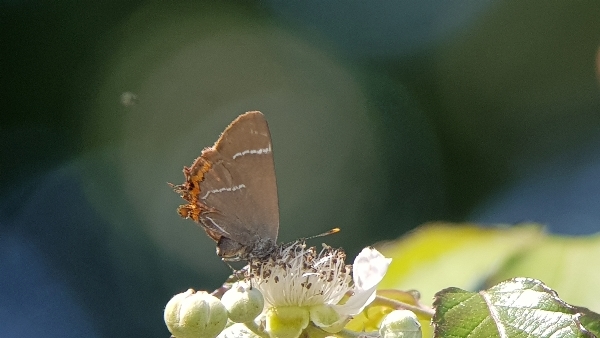 The White-letter Hairstreak never opens its wings, and are hard to find at lower levels below the tree canopy

Our main target was the BROWN HAIRSTREAK, we both wanted to see the colourful female at a low level with her wings open, a tall order yes, but doable. Well after an hour of walking around bumping into people also known to Guy we struck gold!! One of the other guys called out “Brown”!! We walked over to him and sure enough there was a female Brown Hairstreak sitting on a Cow Parsley flowerhead. This little beauty teased us by opening its wings a little way but not fully. She was beautiful and entertained us for a good fifteen minutes before flying off. 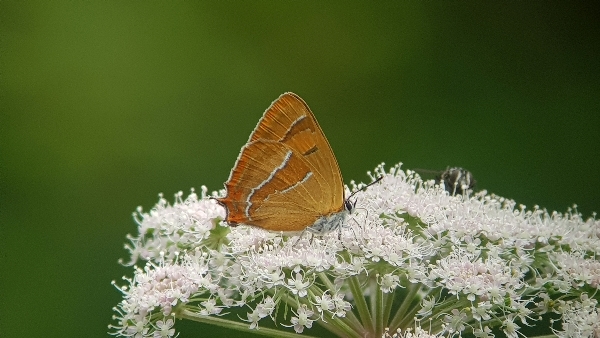 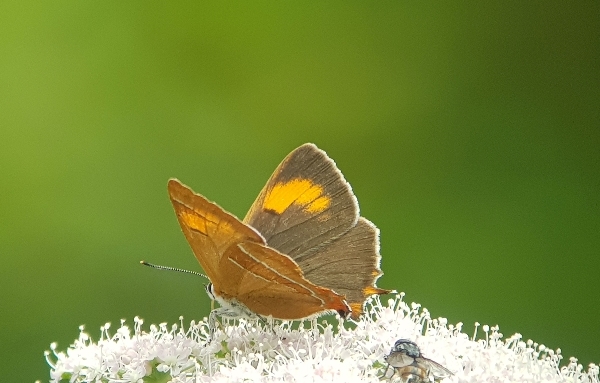 a female with her wings partially open 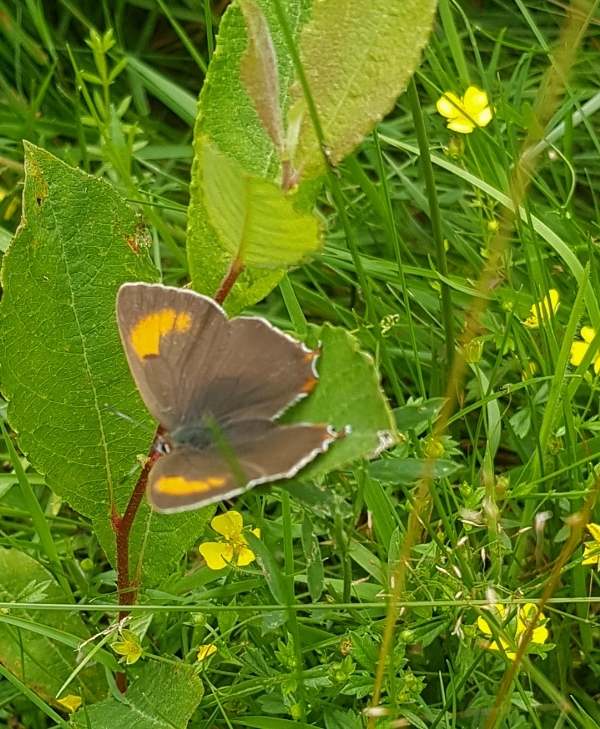 another female with her wings fully open

The same person then found a second Brown Hairstreak not too far away, this was another female and she had her wings fully open showing off her beauty. Guy was lying in the grass within seconds getting his pictures (this was the same grass that he picked up a ‘tick’ from last week!! 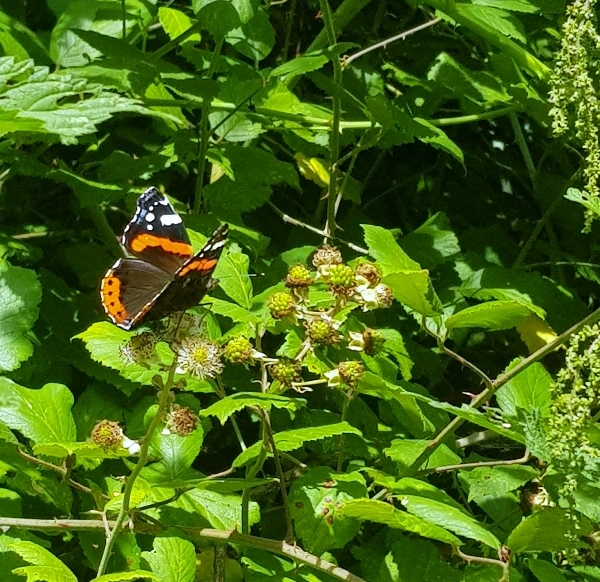 With the Brown in the can we sauntered off looking for the Purple Hairstreak, the easiest to find of the three Hairstreaks found at Alners, We saw a dozen or so and even found one or two down from the canopy feeding on nectar on the Alder Buckthorn Berries. Most of the Purples were looking faded too, their time was nearly over. 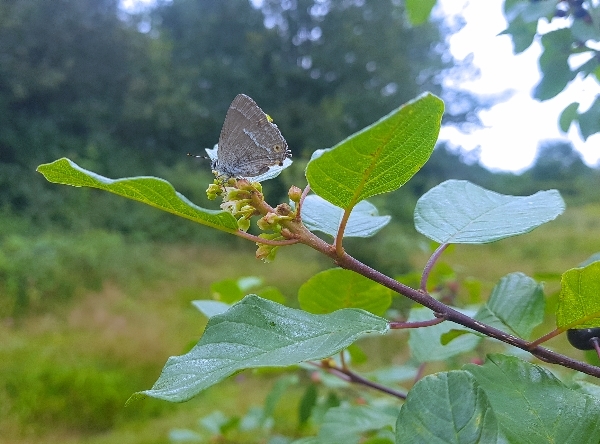 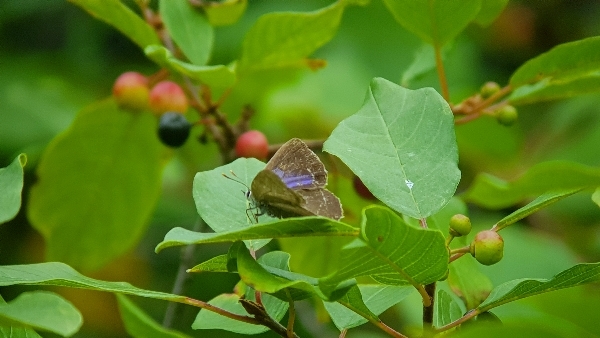 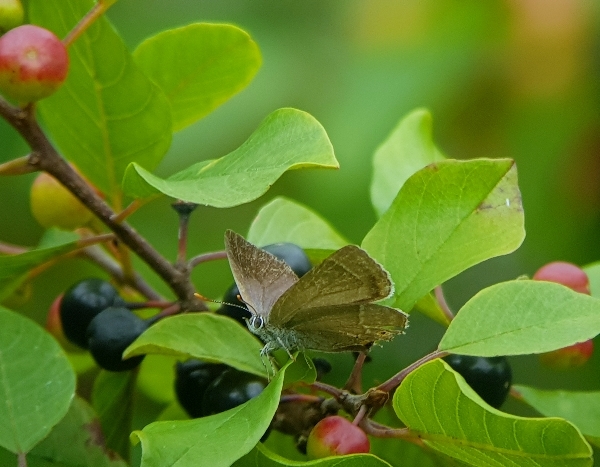 another Purple Hairstreak, it has a large iridescent purple patch but the light was bad and it did not 'shine' 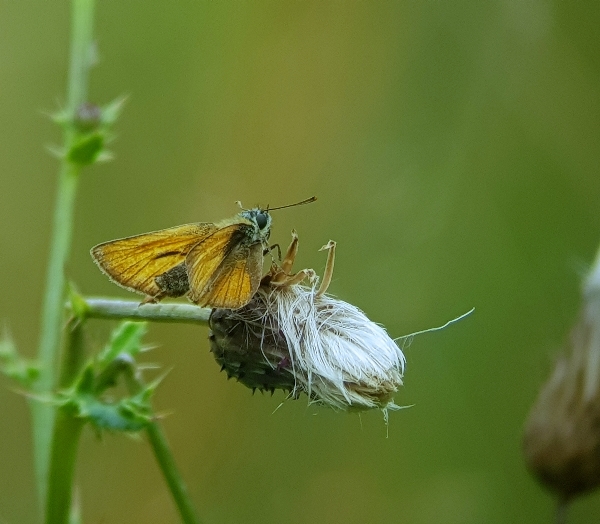 Other species seen included Small Skipper, Small White, Silver-washed Fritillary, Holly Blue and dozens of Meadow Browns and Gatekeepers. We left the reserve around 2:30pm and Guy got me home by 3. It had been a very successful day, Gy had performed well and so survived to live to tell the tale!