AUGUST BOWS OUT WITH A BANG - FERRYBRIDGE AND PORTLAND

WEATHER: cloudy most of the day with some sunshine. Quite chilly northerly wind.

With the southerly migration gaining momentum exciting times are just around the corner! Portland is an excellent place to look for migrant birds, so Guy and I decided to give it go today and what a great day we had too.

We set off from Stoford at 7am and before we knew it we were at Wyke Regis on the eastern side of Weymouth. On the slopes above the ‘Fleet’ there are several army camps, including a shooting range and a ‘Bridging Camp, (where the army make bridges or train soldiers to do so). Yesterday a WRYNECK was reported from the footpath that circumnavigates the Bridging Camp, so that is where we headed for first.

A chilly breeze kept the temperature down but it wasn’t strong enough to make it uncomfortable, as we approached the track above the Camp Guy pointed out a couple of fly-over Yellow Wagtails, they dropped into the adjacent field and soon we were watching half-a-dozen of them, a nice start. 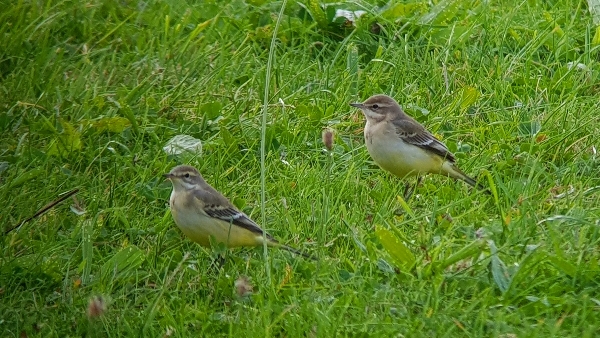 a couple of the Yellow Wagtails seen near the Bridging Camp

We picked out a couple of Northern Wheatears too and a few Oystercatchers flew over calling us as we made our way down the track which runs along the fence of the camp compound. 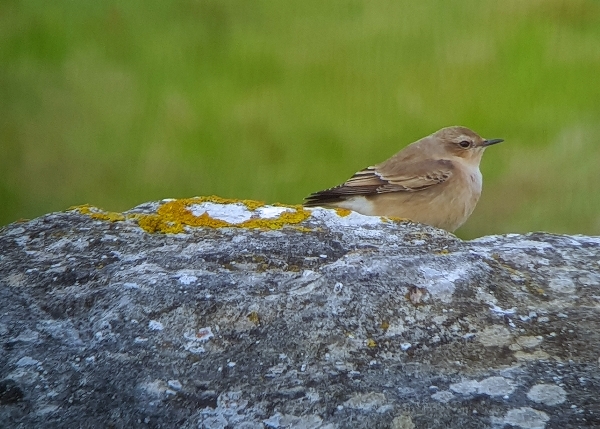 The first of many Northern Wheateras seen today

Before long Guy, who was ahead of me, called out “I’ve got it”, sure enough a Wryneck flew up from the path, onto the fence before disappearing over a hedgerow. We got to the spot where it landed and it then flew off back onto the fence some 100 meters away, it was a very flighty bird. 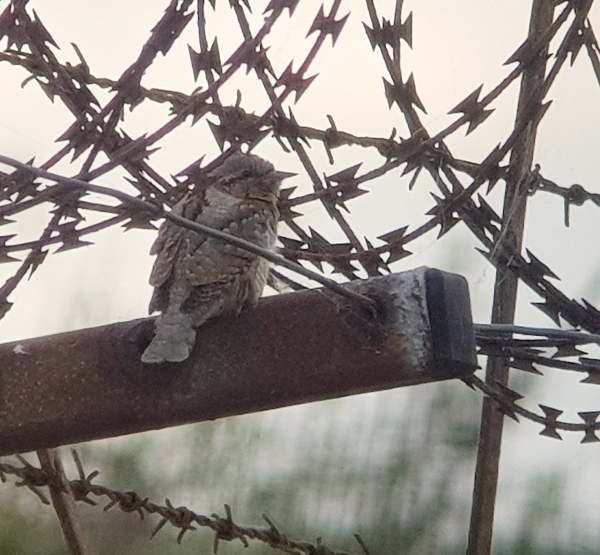 a Wryneck in barbed wire, how nice!

The bird stayed in sight for 10 or fifteen minutes until it was flushed by dog walkers, we lost it aat that point. 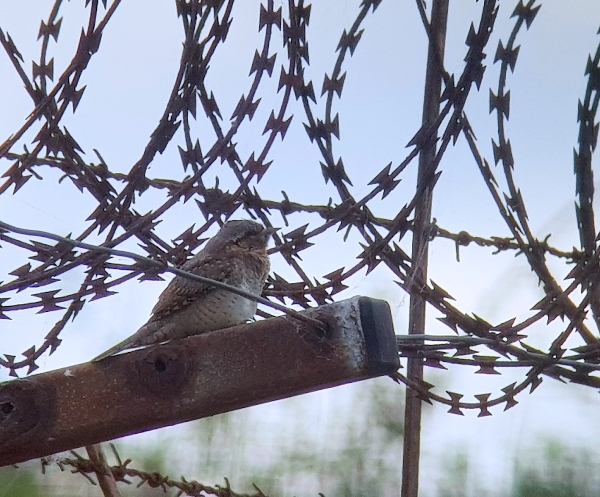 On the way back to the car we saw 3 Black-tailed Godwits flyover and logged another couple of Wheatears. Well, we were very pleased with the start to our day as we set off for Ferrybridge.

The mudflats at Ferrybridge were covered in waders and gulls, after fifteen minutes or so we had cleaned up! Bar-tailed Godwit, Ruddy Turnstone (in both summer and winter plumage), a juvenile Knot, dozens of Dunlin and Sanderling and a couple of hundred Greater Ringed Plover. We also saw Little Egret, Black-headed and Mediterranean Gulls, Oystercatcher and then we heard the plaintive called of a ‘Shank’ chew….chew.  A Greenshank flew over very high up, it circled and eventually came down and landed near the car park, then second bird did exactly the same. 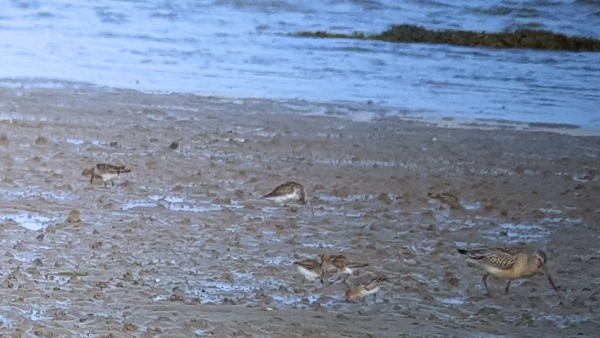 a record shot of some waders, Bar-tailed Godwits and Dunlin 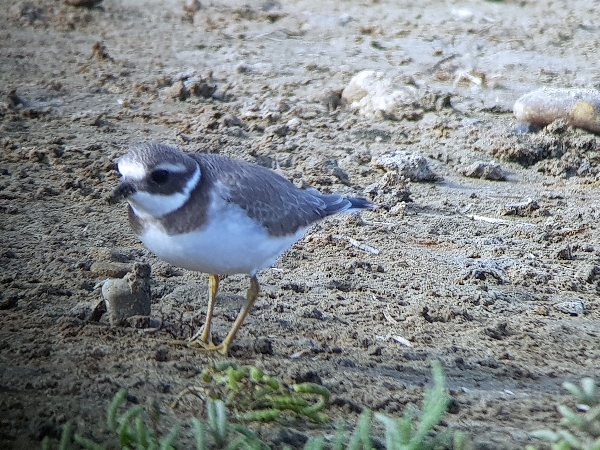 Once on Portland we drove straight to Bird Observatory where we parked the car, from the car park we quickly found a Pied Flycatcher and at least 5 Spotted Flycatchers. 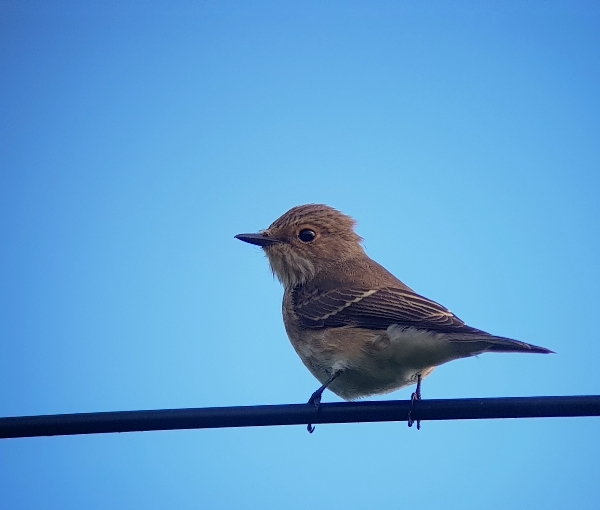 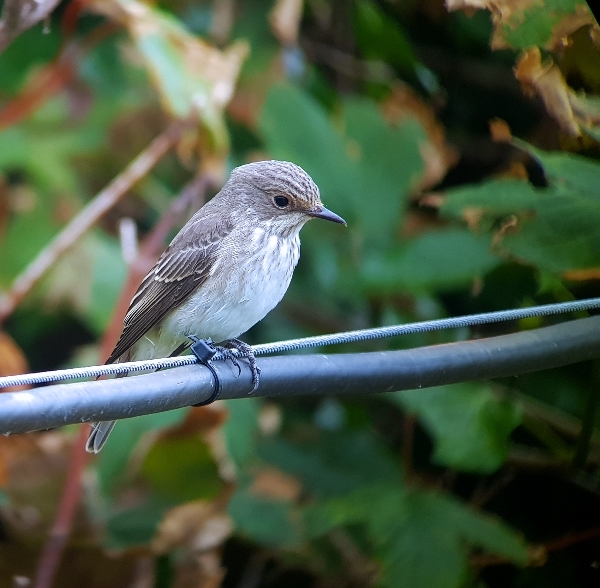 After a quick cup of coffee and a chat with Martin the Obs Warden we set off for a walk into the top fields, as we got to the entrance gate Martin called us back……… he had a WRYNECK in his hands which had just been caught in the nets. Wow!! What a stunning bird in the hand. 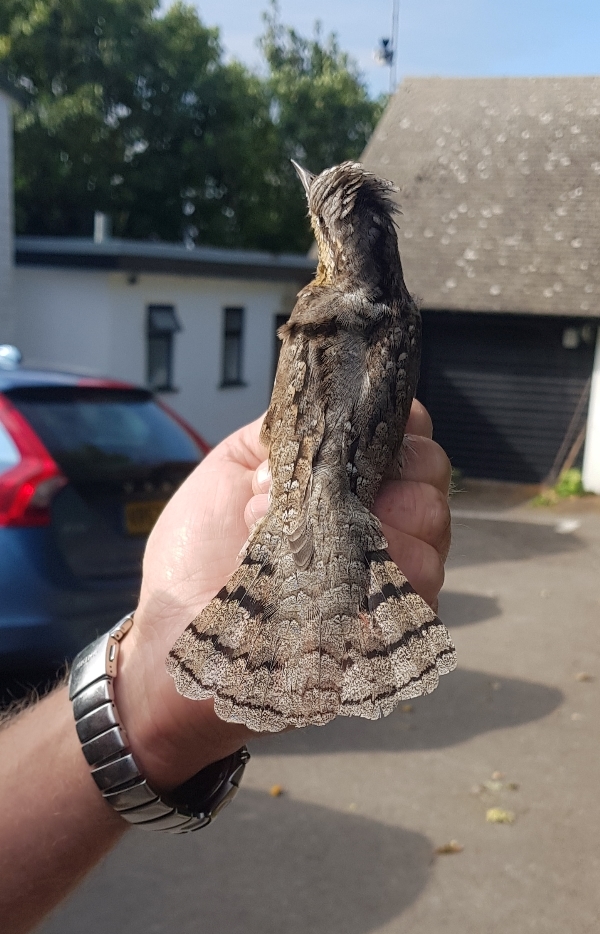 the exquisite cryptic markings of the WRYNECK is fascinating. 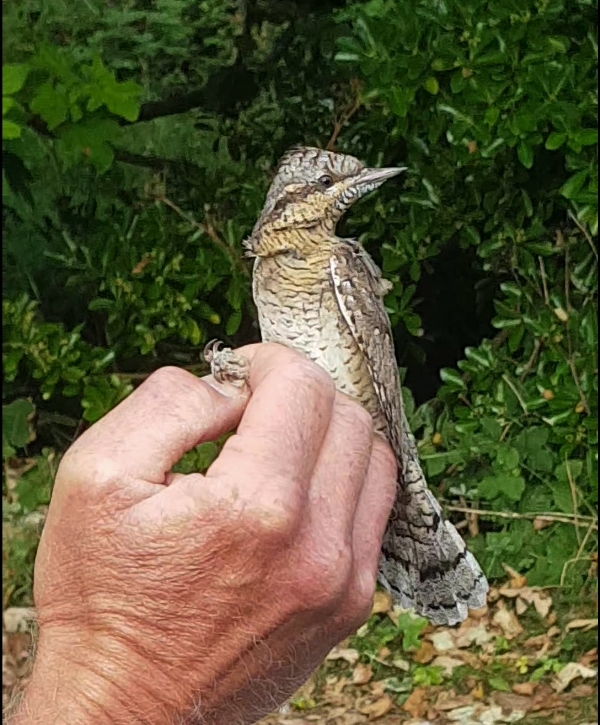 We watched it perform its unusual neck twisting, head-turning party piece, from where it gets its name, see the video on the link below. That just blows my mind, what a bird!! There was no way that we were going to top that, two WRYNECKS in one day was pretty awesome. 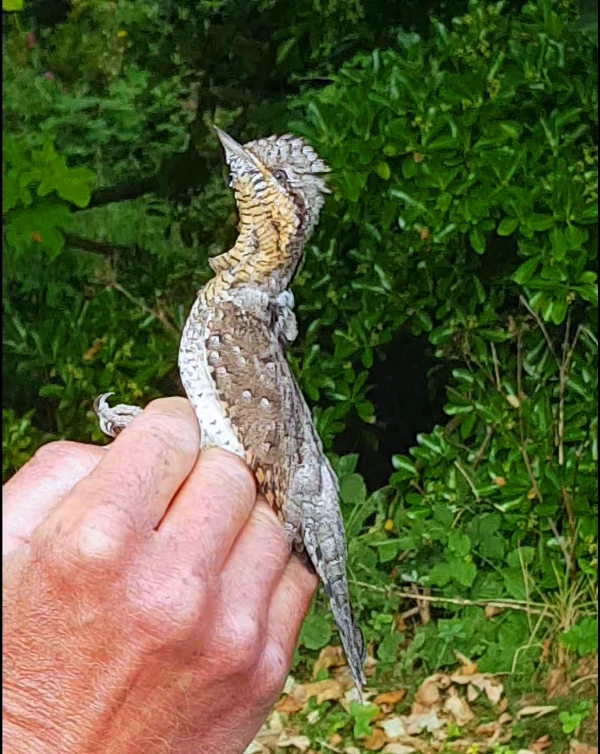 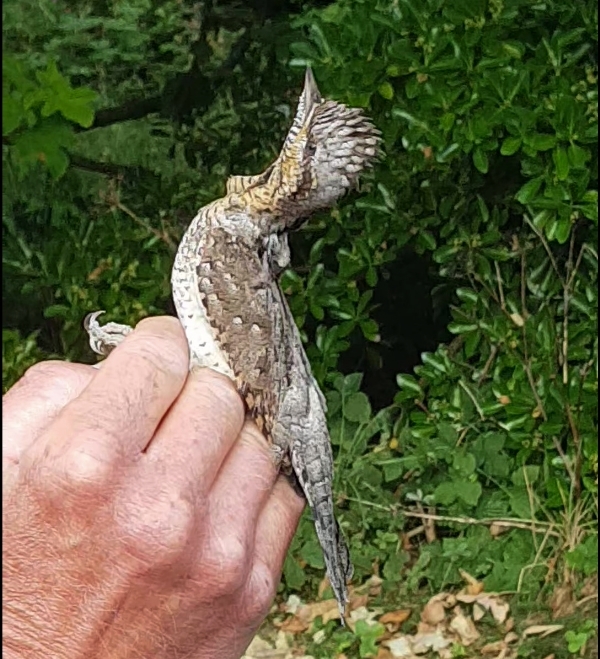 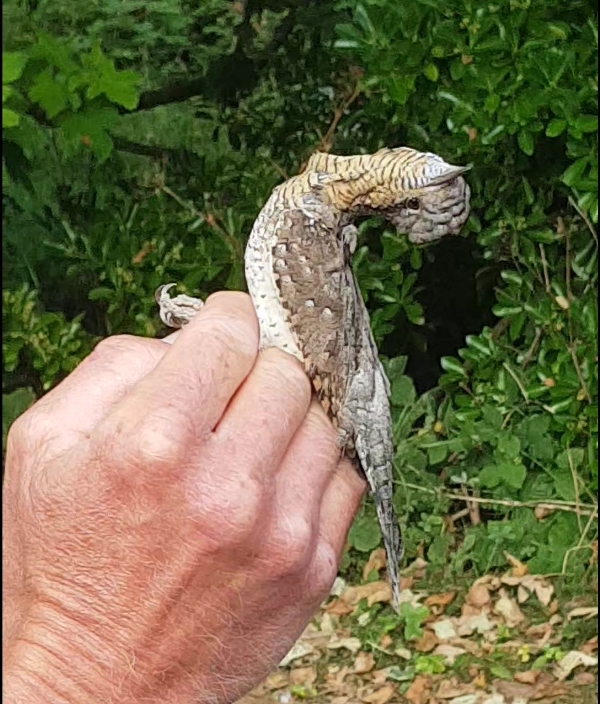 We set off for a walk along the tracks of the top fields and we were not disappointed. Many Wheatears ran along the tracks ahead of us whilst others sat on fences, fence post and bales of hay, it was busy out there. We also saw a family party of Stonechats, at least four Kestrels, then we found five Whinchats and a couple of Common Whitethroats. 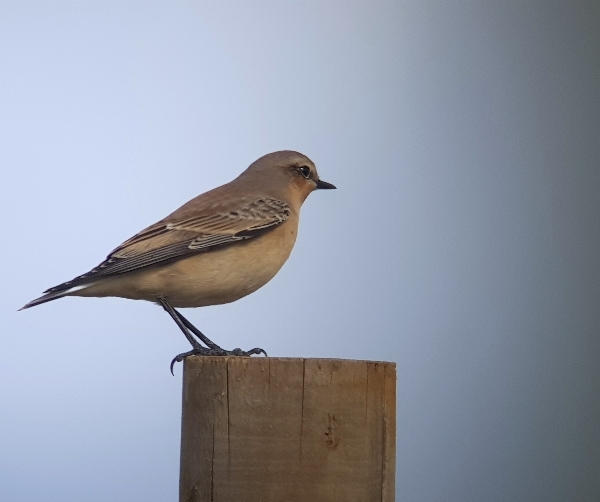 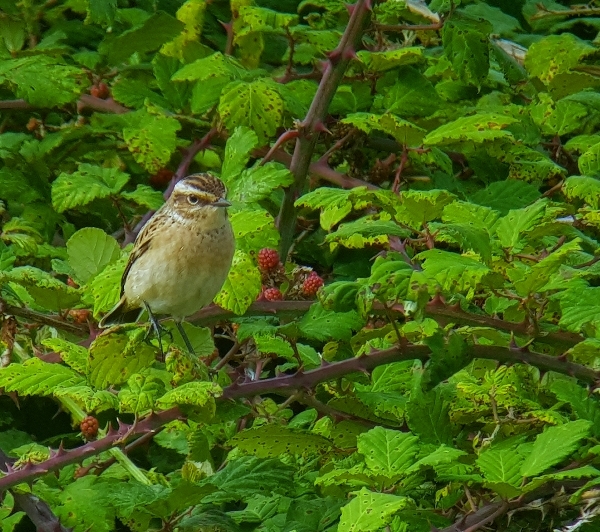 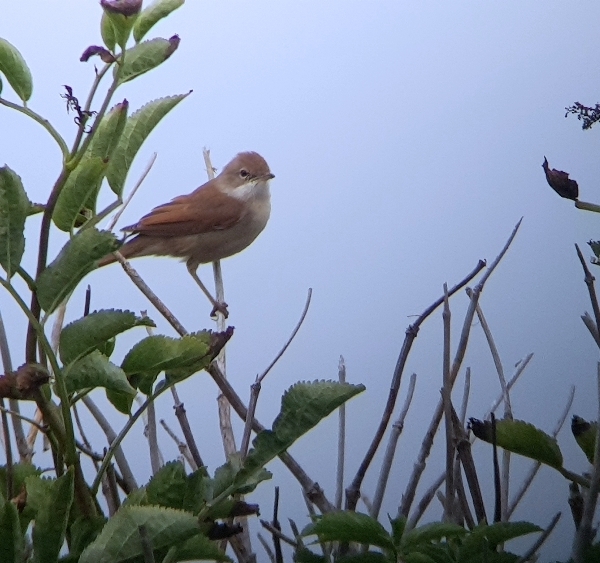 Our path took us to the bottom fields above the East Weare where more Wheatears could be seen as well as a single Whimbrel.

Back at the Observatory we found a Lesser Whitethroat, a Blackcap and a few Common Chiffchaffs before we sat down and ate our lunch on the Obs Terrace. As we ate a party of three Whimbrels flew over and several Spotted Flycatchers entertained us.

From 1pm the cloud cover got thicker and temperature dropped, we spent some time in Seccombe Quarry looking for more migrants, we saw a few butterflies, Guy wanted apicture of a Wall Brown but his ‘whispering’ wasn’t up to scratch today and he failed. 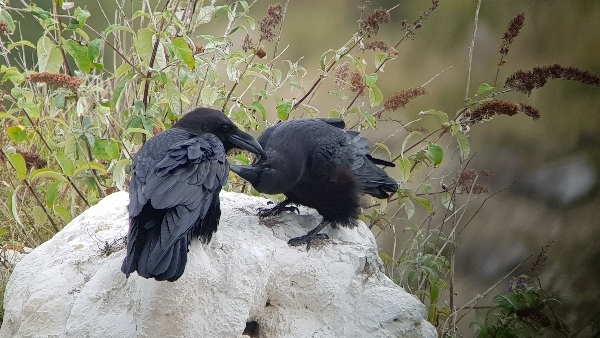 Ravens grooming one another 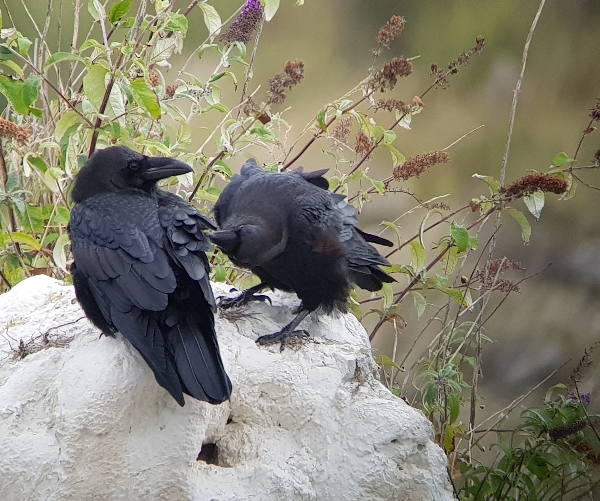 Later at the East Weare Battery he did produce a Chalkhill Blue for me to photograph and we did see a great number of Red Admirals, Small Tortoiseshells, Painted Ladies and a few Peacocks. Meadow Browns were also on the wing as we got sightings of Small Heath, Common and Holly Blues and dozens of Small Whites. 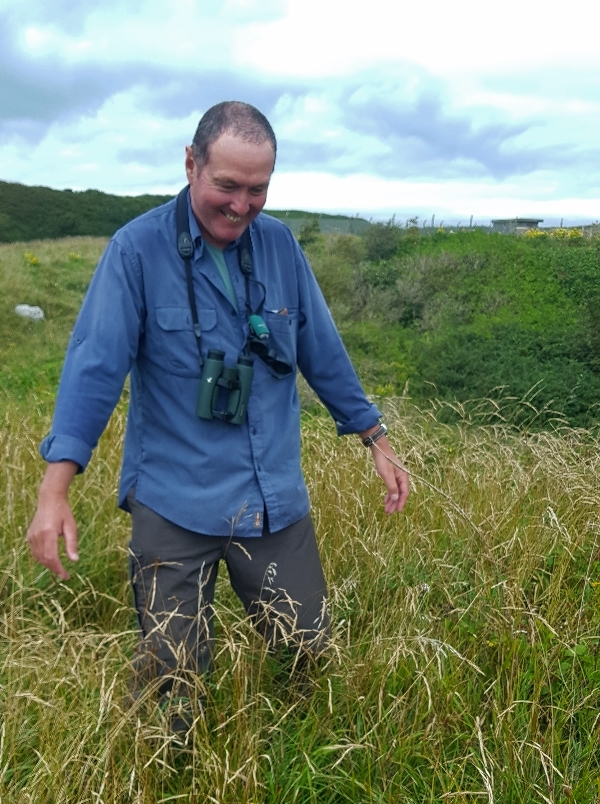 my Butterfly Whisperer, tracking down a Chalkhill Blue 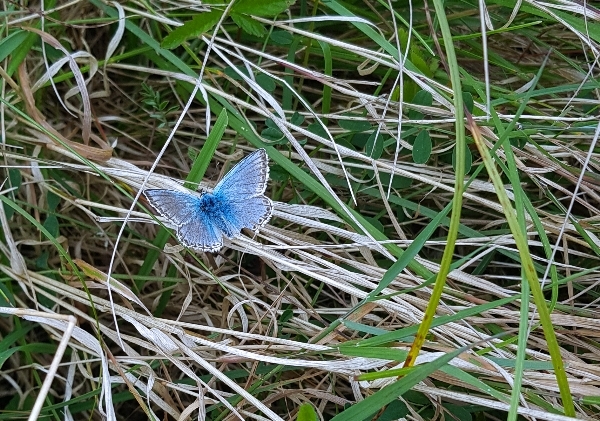 a tatty specimen of a Chalkhill Blue

We finished around 3pm and headed for home, Guy dropped me off and set off for Yeovil after a quick cuppa. It had been a marvellous day and I hope, a taster for what is about to happen in September and October.