WEATHER:  very foggy to start with, it cleared around 8:30am. Very hot and humid, top Temp 24C

Dawn went off to Salisbruy today to help her friend prepare a dress for her son’s wedding on Saturday. I was left at home and without a car, so I decided to walk up through Barwick Park to Yeovil Ninesprings and Summer House Hill. Once again I was on the lookout for migrant species. 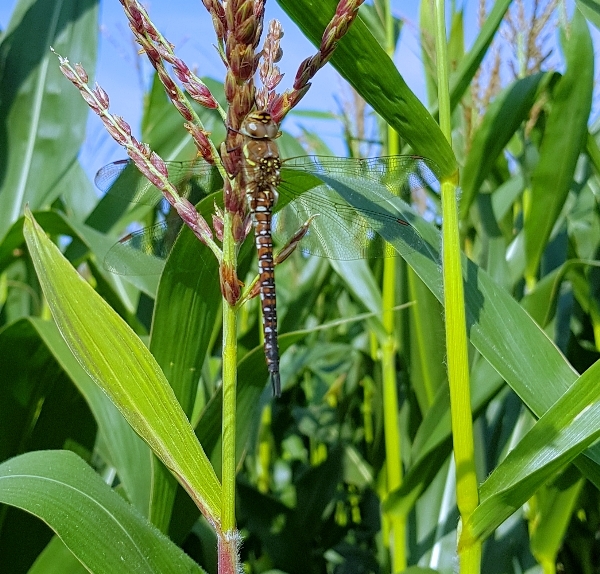 saw this Common Hawker hanging onto a maize stem.

Local birder Oli had seen flycatchers and pipits, wheatears and whinchats in recent visits to Aldon House and grounds which lie adjacent to Ninesprings. I was hopeful of seeing something because of the foggy conditions.

A Green Woodpecker was one of my first sightings as I walked past the 'new' campsite on Rexes Hollow Lane. Then as I turned onto the track through Barwick Park I saw a couple of Pied Wagtails and I photographed two Cormorants sitting at the top of a dead tree next to the lake at Barwick House. 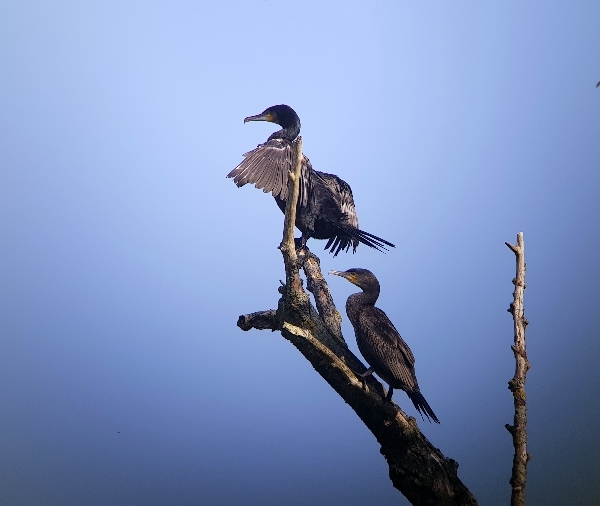 Times are hard when you have to include a photograph of Cormorants in your blog!!!

On the lake I saw the usual three species: Moorhen, Little Grebe and Mallard, it doesn’t get much better than this!!! Then a 'flock' of Mistle Thrushes flew up from the field behind the lake, I counted 11 birds.

About 200 Starlings sat on some distant power lines, I had to check them out just in case a Rosy was in with them, well, it would have been rude not to. Six Goldfinches decided to join them, but they kept their distance. 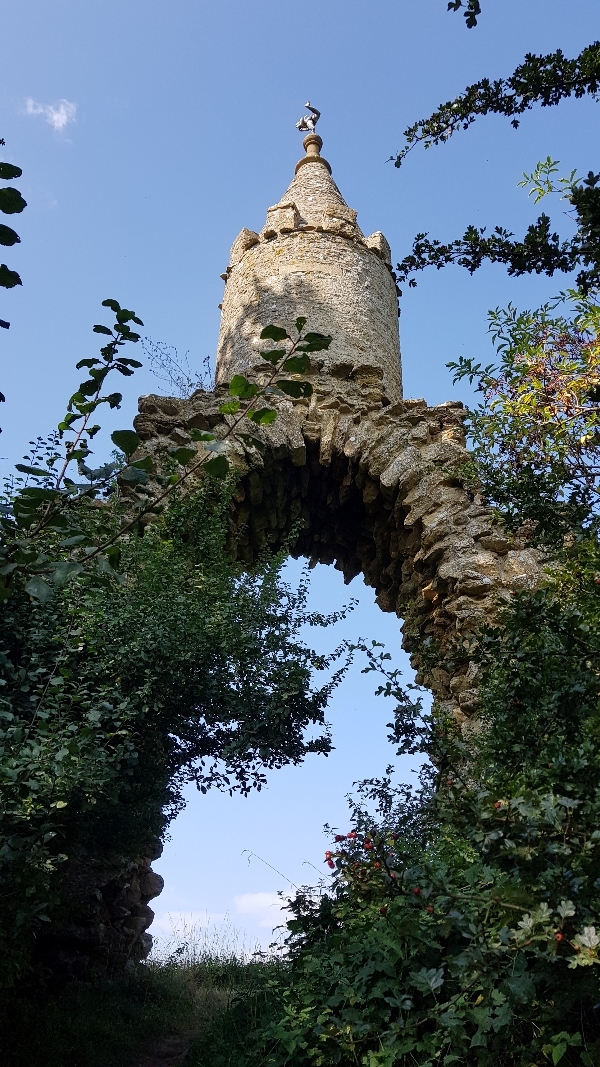 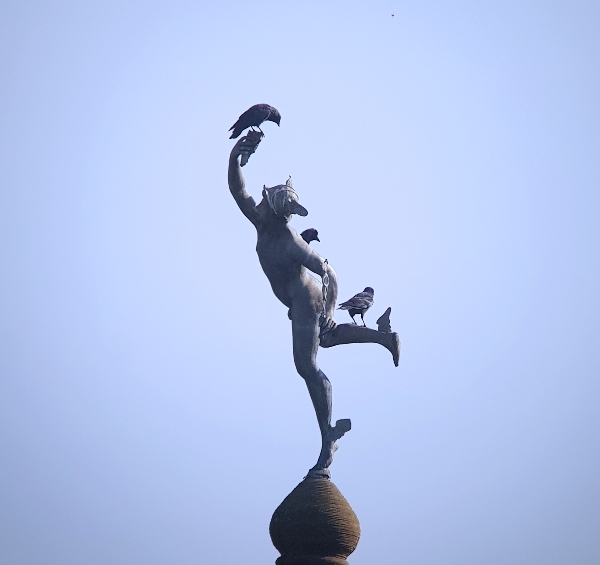 A closer picture of Hermes with his winged helmet and shoes, the local Jackdaws appreciate him being there

The sun was now beating down on me and it got quite warm, I was envious of the ducks swimming about in cool water. A few Barn Swallows flew over and I noticed a Buzzard circling high up.

In the fields at Aldon House I bumped into Oli, he had seen Spotted Flycatchers and Tree Pipits and not much else, I headed towards Summer House Hill because that’s where Oli had seen the birds. I stood on a ridge and looked down to Yeovil Ninesprings and the town beyond, I was at eye-level to the canopy of some oak trees. A bird flew up to the canopy of an oak, I got my bins on it, Tree Pipit in the bag. The bird quickly disappeared, camera shy I think. I stood my ground hoping for it to return and whilst waiting I clocked two or three Blackcaps feeding on elder berries and a single Common Whitethroat. 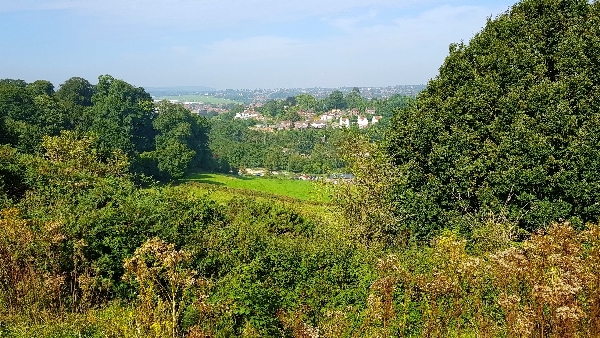 It was now 11am and really quite hot, many butterflies were on the wing, I found my favourite, the Comma, but also saw Holly Blue and lots of Meadow Browns, Small Whites and the odd Red Admiral. 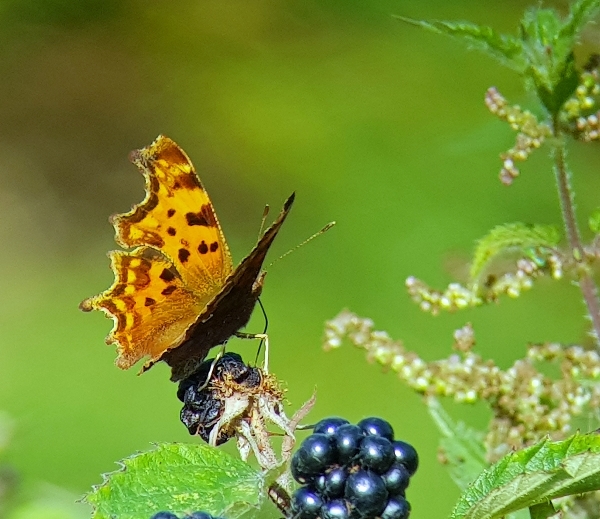 my favourite, the Comma 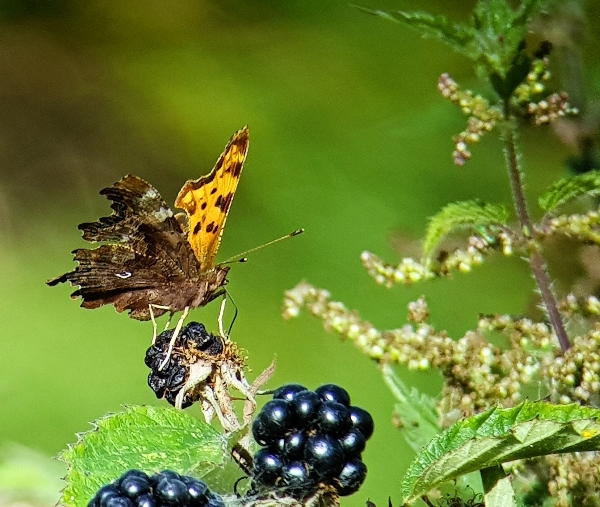 I ventured further along the top of Summer House Hill passing the Round House and the covered reservoir at Constitution Hill. I bumped into a small covey of Red-legged Partridges and a single Pheasant before finding a Spotted Flycatcher. This bird was also camera shy and hence no pictures.

Back at home I had lunch and then watched the feeders for a while, I can’t remember where the time went and soon Dawn was back, it was 6pm, she had dinner in bag, I could just make out Palmer’s Fi n ips on the crease line of the bag.

Elsewhere, there are plenty of Wryneck sightings, they are still turning up all over the country, a Bluethroat and a Glossy Ibis appeared at Slimbridge and someone reported a Red-breasted Flycatcher on Portland. Ospreys are turning up everywhere and a Fea’s Petrel is circumnavigating the British Isles.