On Saturday the 18th  Dawn and I took Sophie, Dawn’s daughter, down to Lyme Regis to walk along the River Lim, one of our favourite walks. We met Celia in the car park in Uplyme just before wet set off. It was a lovely sunny calm day the well-trodden footpath was quite busy, everyone we past had a dog or two and we had Sophie’s dog with us, so our pace was slow as all dogs have to sniff each other’s nether regions when they say hello.

that is me walking up Dragon's Hill

The river was quiet and the hedgerows bereft of birds in fact the only species I saw was when we made a detour up to ‘Dragon’s Hill’. Near the top I saw a few Willow-Chiffs, most probably Chiffchaffs and a couple of Spotted Flycatchers. Dozens for Swallows were feeding over the meadows and the usual Rooks, Jackdaws and Crows were making themselves heard. 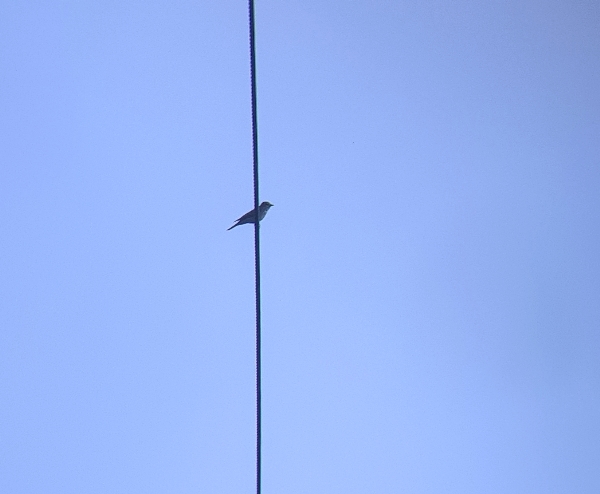 this is a Spotted Flycatcher

We ate our picnic lunch on a bench besides the river, wary of the Herring Gulls that sit like vultures on the chimney pots waiting for an opportune moment to swoop down and steal your sandwich out of your hand. A couple of Grey Wagtails brightened my day as we neared the sea-front.

We walked round to the Cobb after eating an ice-cream and on the rocks of the Cobb-extension I saw 3 Dunlin, 4 Ringed Plover, a dozen Cormorants and I didn’t count the gulls. The resident Eider Duck was nowhere to be seen in the small harbour but I did see Pied Wagtail and a few Rock Pipits. 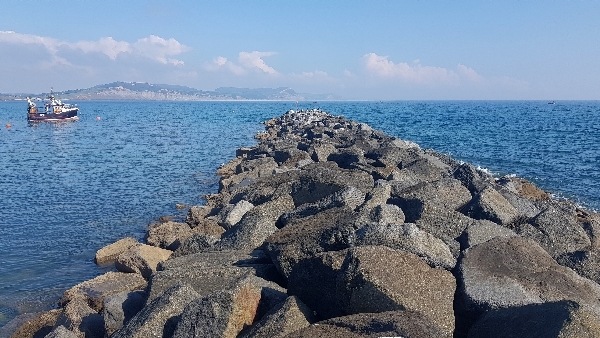 the rocky breakwater is an extension to the Cobb at Lyme Regis, it is a roosting site for waders and gulls and a winter refuge for Purple Sandpipers. 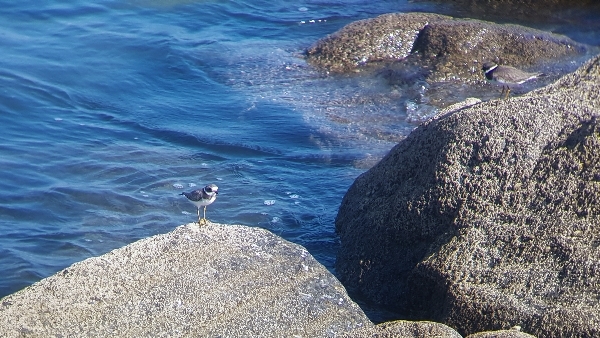 The walk back to the car failed to produce a Dipper, I can’t remember the last time I missed a Dipper on this river!

I decided to walk around Yeo Valley to see if any migrant bird species had dropped in. I set off at 9am and I had limited time because we were due to collect mother-in-law at 12 noon to take her to Sunday lunch (birthday special). I saw very little except a flock of Siskin, about 15 of them, they flew off before I had a chance to photograph them. Many insects were visiting the ivy and the Himalayan Balsam which lines the brook, I know this is an invasive species but it does provide nectar in the autumn for the bees and hoverflies. 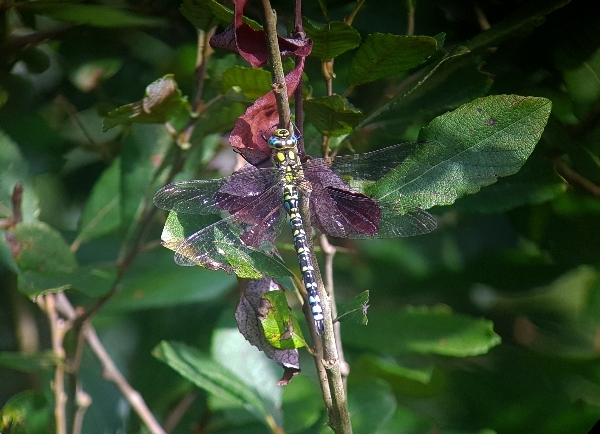 At 10:30 my phone pinged, a message from Pete Ackers, he had found a SPOTTED REDSHANK at SBR, wow!! That’s a local mega, never been seen at SBR in my lifetime (since the 70’s). I happened to be a mile and a bit away from home so I walked quickly (I can’t run) back to my car outside our flat and shot off to the reservoir. I got there just before 11am and luckily the bird was still present albeit very far away. 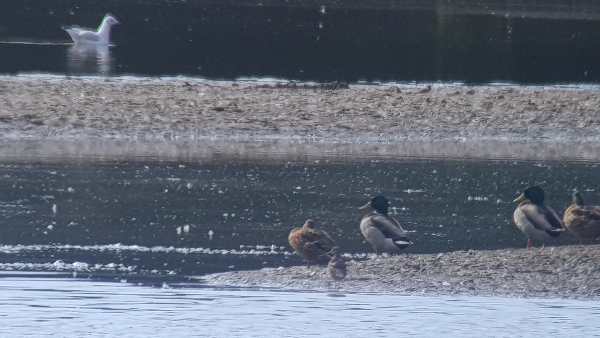 there is a Spotted Redshank in these pictures, honestly! 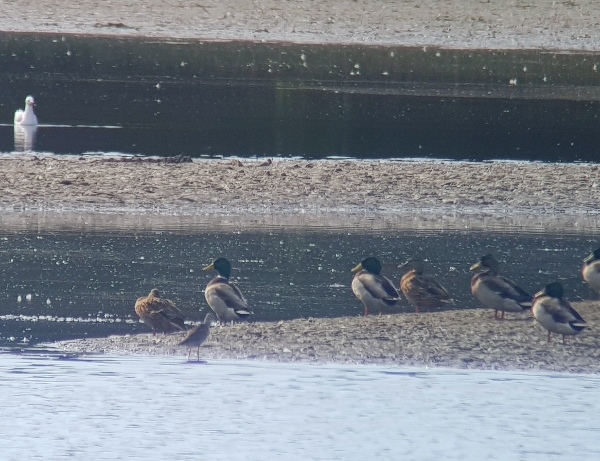 Spotted Redshank was a SBR lifer and a year tick for me, thank you Peter. We also saw Water Rail (another rare find at SBR), a Green Sandpiper and a couple of Common Sandpipers. Also present were a family party of three Little Grebes, two Little Egrets, Grey Heron, lots of Mallards, a single Wigeon and dozens of common species of gulls.

I managed to get back home in time to change and drive off to collect mother-in-law for her lunch date, so all my body parts remain intact!!

Monday 20th  Beer to Branscombe walk and a visit to Seaton Wetlands.

What a fabulous sunny day, a light breeze kept us cool and the bright, clear air, gave us wonderful visibility, along the coast you could see for miles. We set off from home around 9am for the hour-long drive to the tiny sea-side village of Beer in Devon. A traditional coastal walk, completed by many people everyday of the year, can be taken along the cliffs to Branscombe, some 3 miles west along the cliffs. There are some testing hill climbs for old git like me but Dawn was up there ahead like a mountain goat. 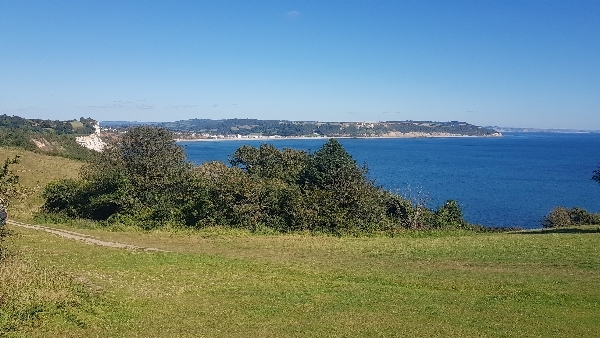 The birding wasn’t too bad, a saw a couple of Spotted Flycatchers, a steady flow of Meadow Pipits, some Blackcaps (four together at one point), about 14 Northern Wheatears, lots of Goldfinches and Linnets. A steady stream of Swallows drifted eastward along the meadows and cliff tops. 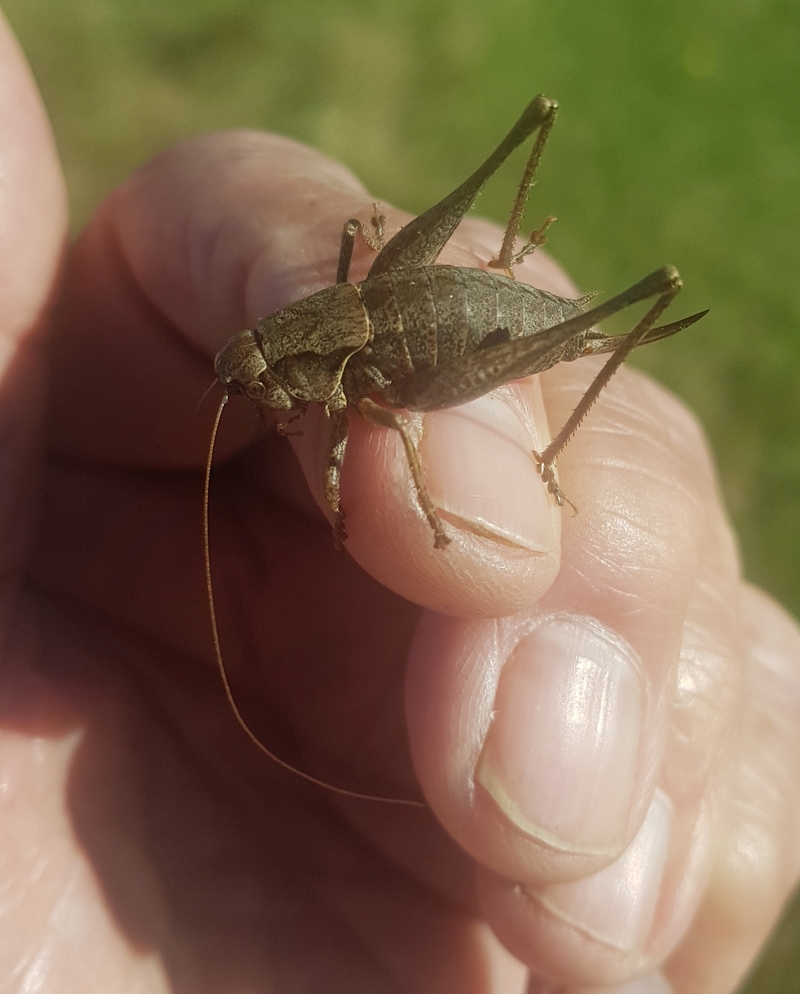 this Dark Bush-cricket (female) appeared on my arm

But it was the views and the exquisite light that made the day, showing us how beautiful the south coast really is. Looking south westward we could see all the way to Berry Head at Brixham (50 miles) and eastward we could see Portland quite clearly (40 miles). 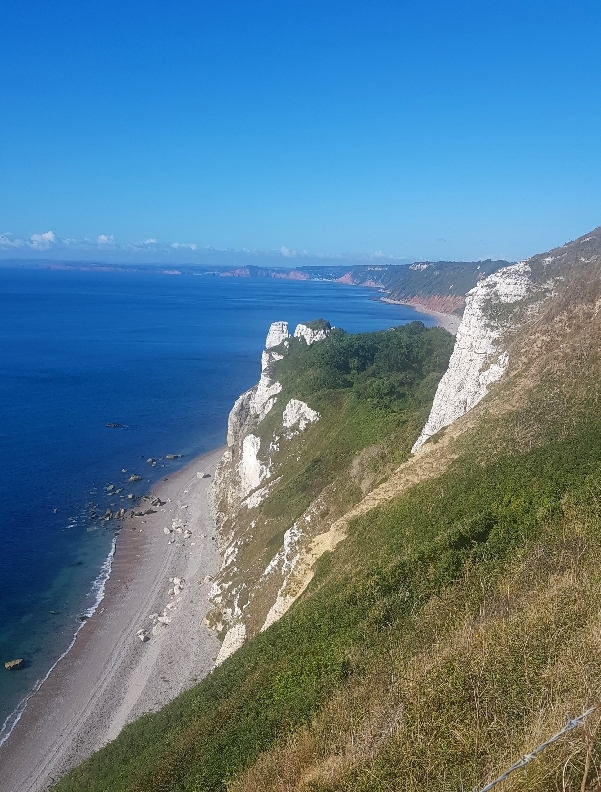 We ate our picnic lunch on the beach at Branscombe before attempting the steepest climb, the east cliff walk from Branscombe back towards Beer is a bit of a killer, I had to stop several times and Dawn was lost in the distance. I eventually got to the top, sweaty and out of breath, where Dawn was sat on a bench looking fresh as a daisy. 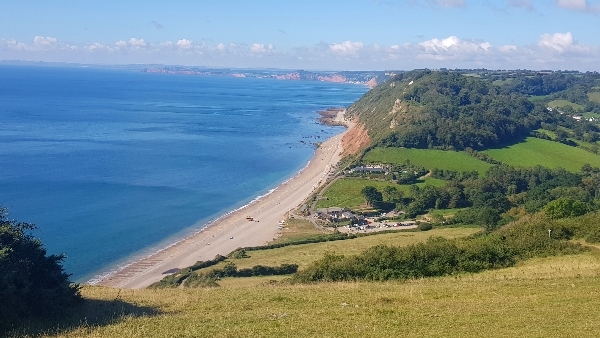 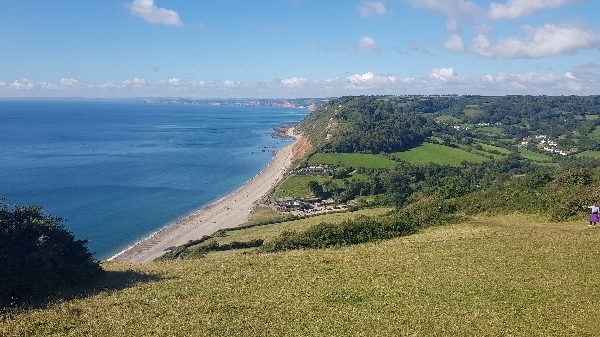 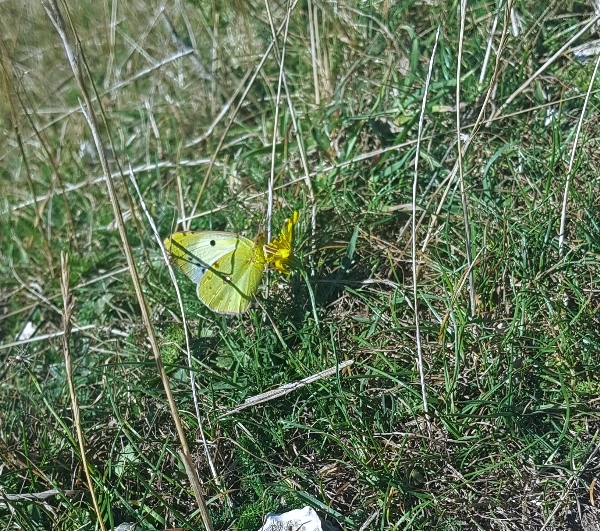 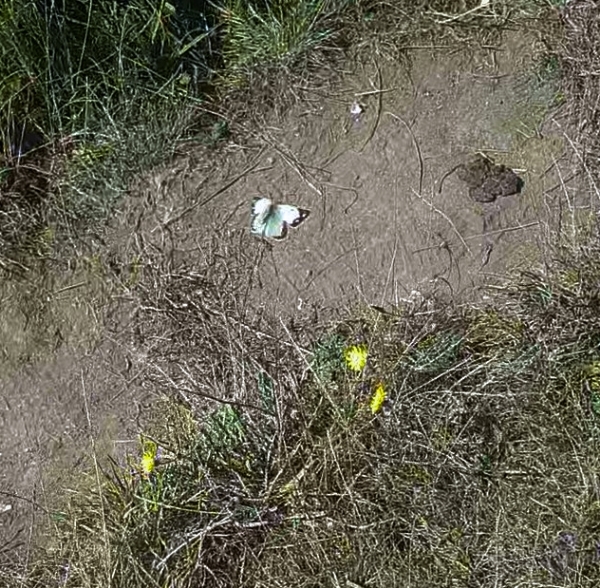 here it is in flight 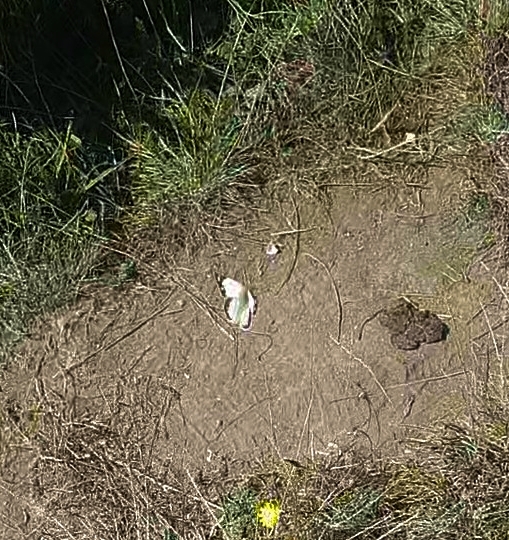 It was 2pm when we got back to the car, so we drove into the next town eastward which is Seaton, we had to pass Seaton Marshes, so I suggested we stopped for quick peek. By chance my telescope was in the boot of the car and I already had my bins and phone-camera, so we popped in, well it would have been rude not to!! 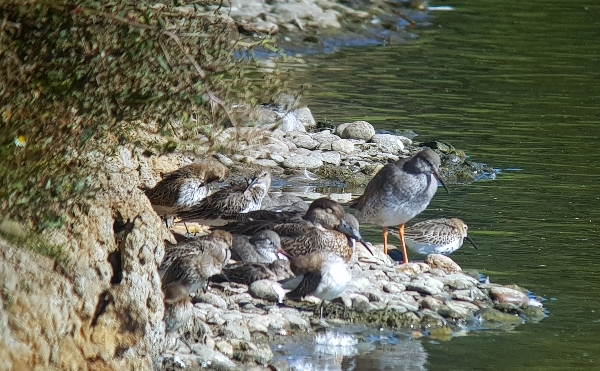 One picture from Seaton Marshes, Redshank, Dunlin and Teal

The problem was that it was low tide and the wader scrape viewed from the ‘island’ hide into Black Hole Marsh was virtually empty of birds. I saw a couple of Redshank, a single Curlew, 7 Dunlin, a few Common Shelduck, Little Egret, Mallard, Teal, Moorhen, Grey Heron and a few Black-headed Gulls. We (I mean I) left disappointed, we drove straight home from there.