Nigel Bleaken arrived at our flat at 7am, right on time as usual, he jumped into my car and we set off for Portland. It was very foggy until we climbed up over the hills towards Dorchester. The morning light was sublime, emblazoning the landscape with golden sunlight reflecting off the white mist that was lying in the valleys on either side of the road.

It was approaching high tide as we arrived at Ferrybridge so we stopped to look for waders, terns or gulls. A few Mediterranean Gulls loafed on what was left of the exposed mud but no waders were in sight, we scanned the grassy bank on the chesil bank and found 3 or 4 Northern Wheatears and some Linnets. In the distance we could see a flock of Oystercatchers on the shoreline with 3 Bar-tailed Godwits. 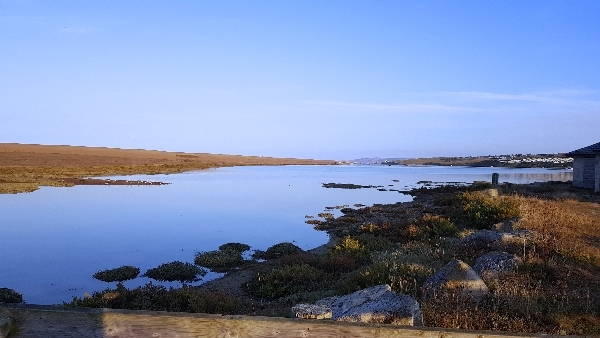 Moving on to Portland we parked at the Observatory and spoke to the warden wo told us that it was very quiet and all the migrant birds had cleared out in the good weather and the clear over-night sky. The guys on the terrace who were sea-watching had just seen 4 Arctic Skuas and a couple of Balearic Shearwaters had flown past a little earlier. Encouraged by this news we decided to walk down to the Bill for a little sea-watching of our own. Nigel nipped into the Obs whilst I lingered near the entrance gate, I was watching a group (family party) of Common Kestrels when a SHORT-EARED OWL started quartering the field on the far ridge, Wow! I wasn’t expecting that. 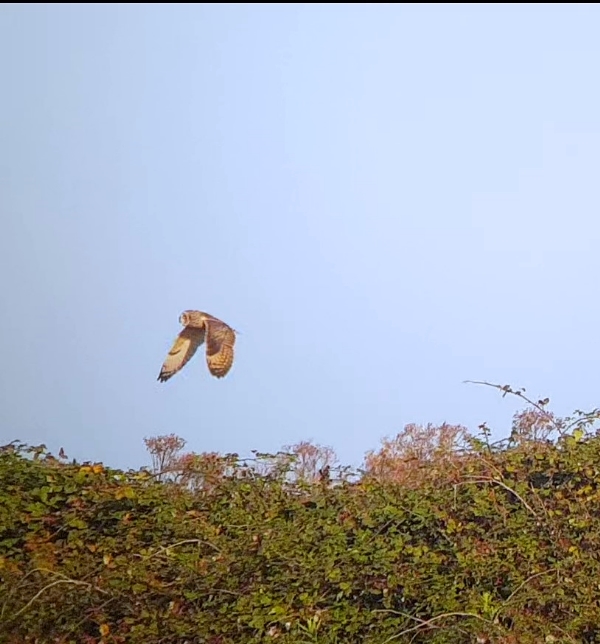 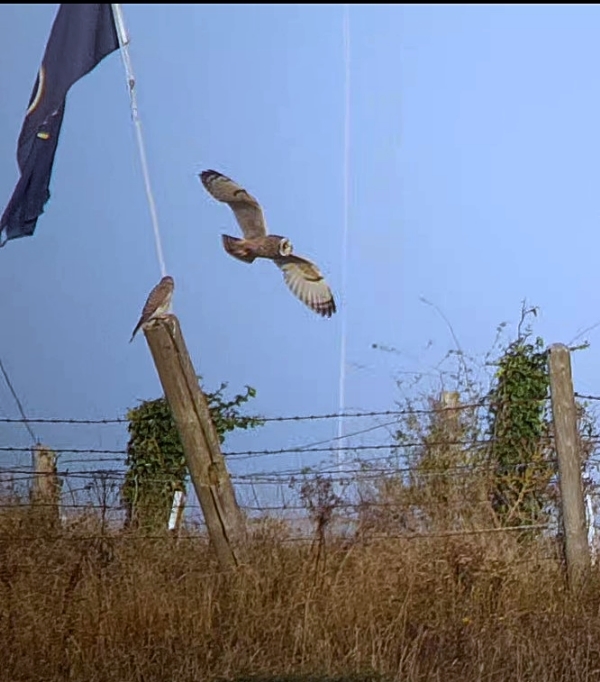 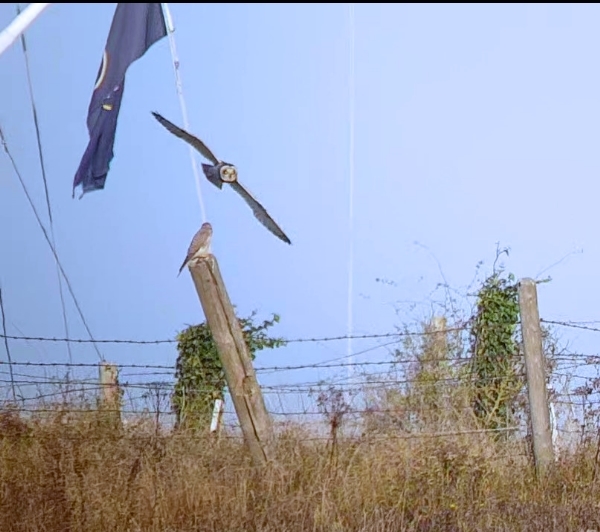 the SEO watched by a Kestrel

Nigel saw the owl too and we walked down to the Obs’ Quarry to look for a Wryneck (one had been loitering in the quarry for the last week), the Wryneck did not show but we saw Common Whitethroat, Blackcap and dozens of hirundines were swarming around the fields, we noticed that many were perching in the nearest power lines, we ‘scoped them and picked out several Sand Martins. 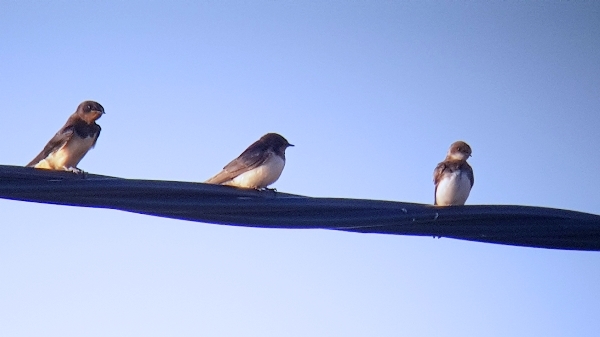 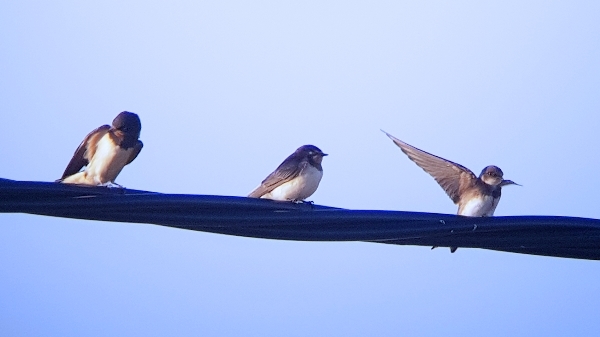 As we crossed the ‘Common’ near the Bill we noted a few Northern Wheatears and plenty of Meadow Pipits, in fact the area seem to be teaming with Pipits. Near the Bill we found Rock Pipits and saw both Cormorant and Shags flying past the Bill. I settled down for a sea-watch whilst Nigel walked around the rocks taking pictures. It was very calm out at sea with a very light breeze, not the weather for blowing-in passing sea-birds. I did however see some Gannets, Fulmars, Kittiwakes and more Cormorants and quite a few Shags were sitting on the water, the Herring Gulls were pouncing on the Shags every time they came up with a catch. 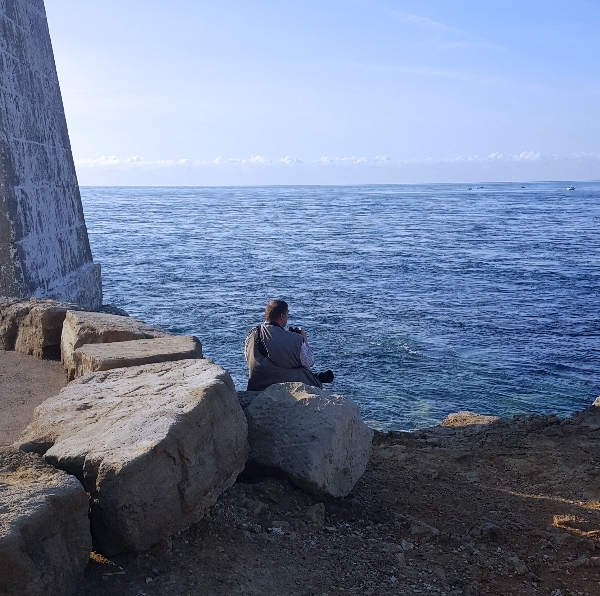 After just ten minutes I saw two Common Scoter flying eastward, then two Shearwaters appeared, relatively close in, close enough to identify them as BALEARIC SHEARWATERS, I got two other guys onto them. Just after that a ‘string of 9 Common Scoters flew in the same direction, a duck was with them, I identified it as a Teal!!

Nigel and I then walked back to the Obs via the fields behind the Pulpit Arms, we saw more Pipits, Linnets and Stonecats, a couple more Wheatears and a few Ravens. As we walked towards the Quarry a Little Owl flew up from behind some brambles, it landed in the Quarry and settled in its’ usual perch and posed for our cameras after hiding for a little while. 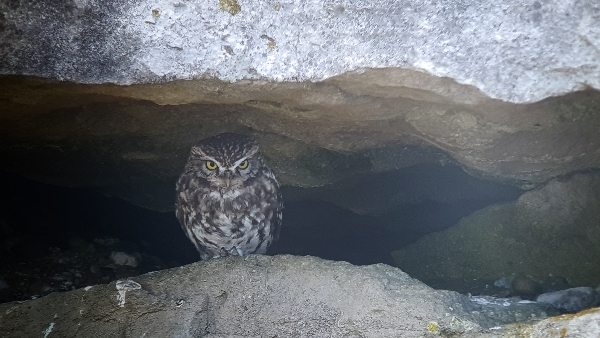 The Little Owl in the Obs Quarry

From Portland we drove back to Ferrybridge, the tide was receding, more mud was exposed which attracted a few more birds. The Bar-tailed Godwits were now fairly close, but not many other waders were present. A very obliging Skylark landed not too far from us, this was my first Skylark sighting for September!! I must get out more often! 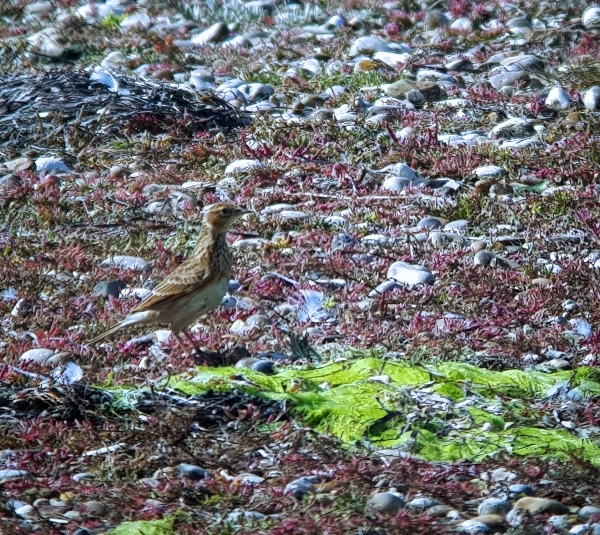 This Skylark flew much nearer but I couldn't get a focused shot of it!! Nothing new there then? 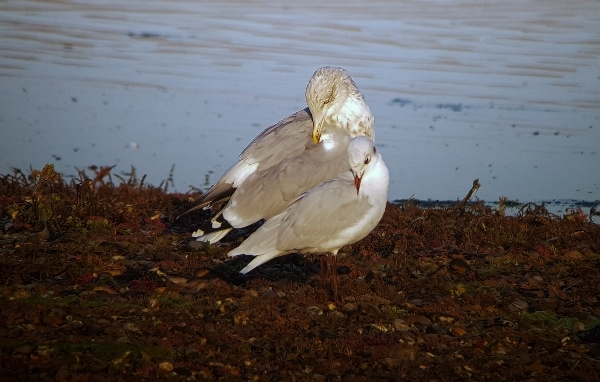 "Bow your head, Bob the birder is watching us"!! 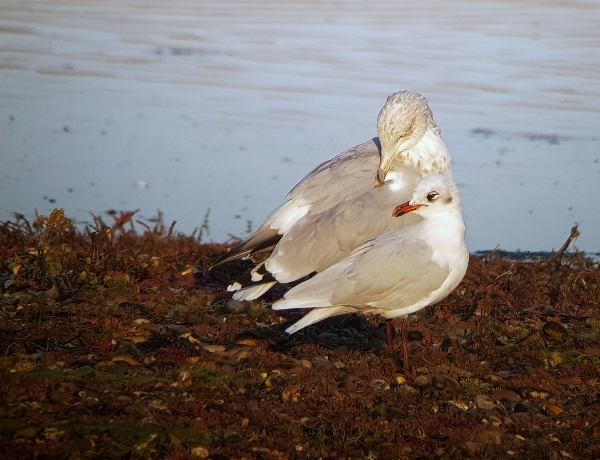 Mediterranean Gull with a Herring Gull - both now in winter plumage. 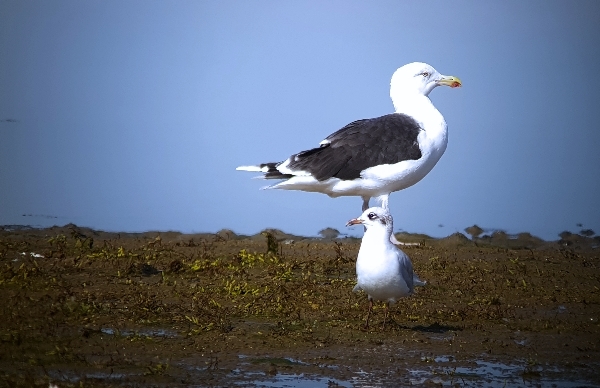 From Ferrybridge we drove into Weymouth and parked in a side street near the northern section of the Radipole Lake RSPB reserve. This reserve has been totally neglected since the COVID Pandemic began, everywhere the shrubs, reedbeds and track-side scrub is so over grown that you cannot see onto the reserve 's lagoons, with very viewing points overlooking the water. Having said that there was plenty of Dragonfly, butterfly, bees and hoverfly activity and we heard Cetti’s Warbler a few times. 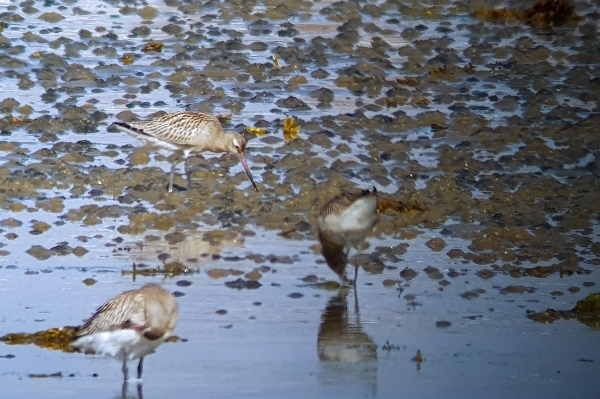 From view points along the ‘buddleia loop’ we noted Mallard, Gadwall, Teal, Shoveler, Tufted Duck a single Wigeon, Cormorants, Mute Swans, Moorhen, Coot and a couple of Black-tailed Godwits (they were emersed up to their bellies in the main lagoon, the advantage of having long legs!).

Nigel searched for Bearded Tits as I walked back to collect the car and planned to drive it round to the main entrance whilst Nigel sauntered along the track. Unfortunately for Nigel I saw 3 Bearded Tits from a stone-bridge, and he saw none. We met up again at the ‘Visitors Centre’ which as usual was closed. I scoped the main lagoon from a wooden bridge and again picked up a couple of Beardies, whilst Nigel sat in the car taking a breather and shelter from the hot sun. 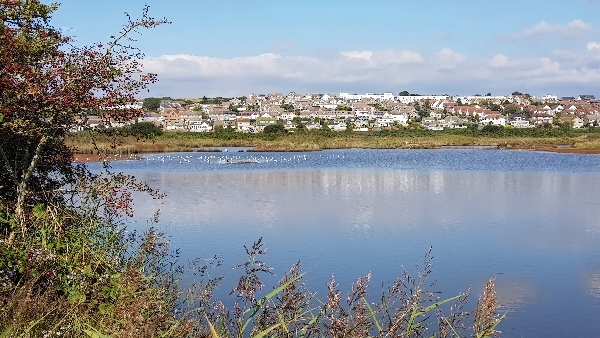 We ate our picnic lunch in the Parkland along Radipole Lake Lane before driving round to main entrance at Lodmoor along the seafront. It was now quite warm, but a nice, cooling breeze had developed. We had a very pleasant 45 minutes along the west rack with the sun behind us, the light was superb, a little too bright for good photography. We saw a bunch of different species but nothing to light up the sky with, Black-tailed Godwits, Dunlin and a single ‘white’ Ruff. This Ruff had been seen over the last couple of weeks and this was my third attempt to see it. Three Great Egrets standing with Grey Herons was nice to see and we had unbelievable close views of Cetti’s Warbler which Nigel promptly photographed. 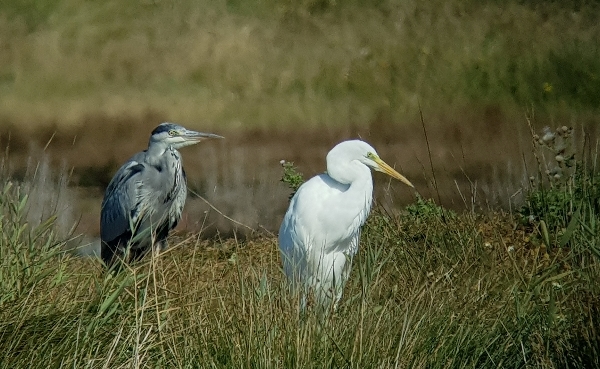 two of our largest species of the Ardeidae Family,  Grey Heron and Great Egret 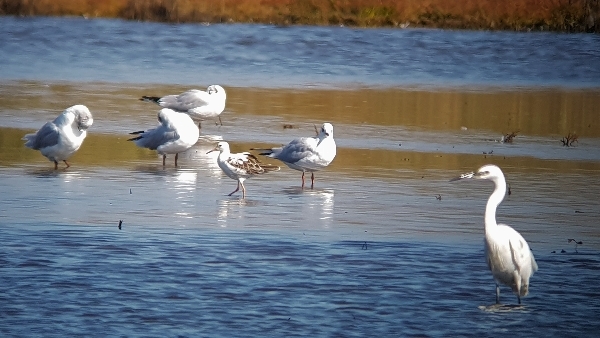 The 'white Ruff' with B H Gulls and a Little Egret

We set off back home at 2:30pm, I had several things to do today including packing my things for my trip to Cornwall and the Isles of Scilly. Nigel stayed for a quick cuppa wit Dawn and I, we ate a lovely piece of cake (supplied by Nigel) before he set off for home.