It was the mother-in-law's ninetieth birthday and we took her to her favourite place - Lyme Regis. We walked along the sea front in lovely sunshine with hundreds of other people before settling down for lunch. During ther walk we past the harbour and I saw the EIDER DUCK which has settled there for its second winter, it was a year tick for me. 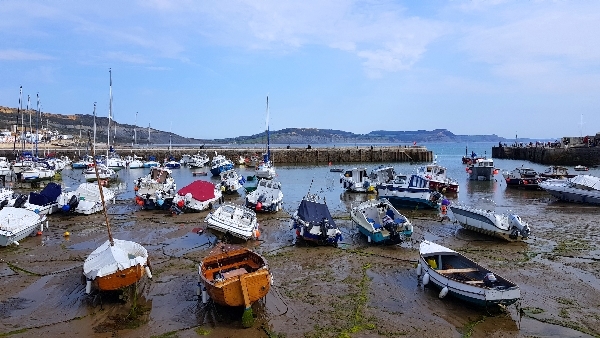 the small Harbour at Lyme Regis during low tide 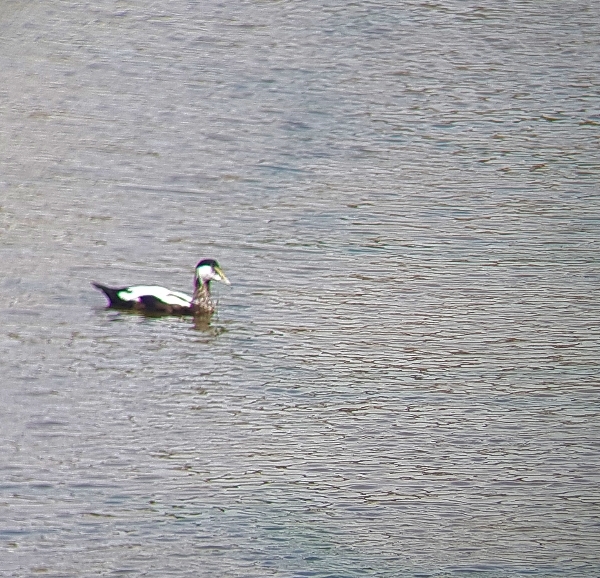 the Eider Duck, which Nigel and I missed on a recent visit to see it. To be fair, we did not look in the harbour because I said it would be in the Bay..., Doh!!

I had another great day out with my Welsh buddy, Nigel. We met at Herriot’s Bridge at Chew Valley Lake at 7:30am, there was a thick mist lying in the valley and we both had driven through thick fog during our respective journeys. Visibility was restricted at Herriot’s Bridge but after about an hour the mist lifted and we had glorious sunshine. 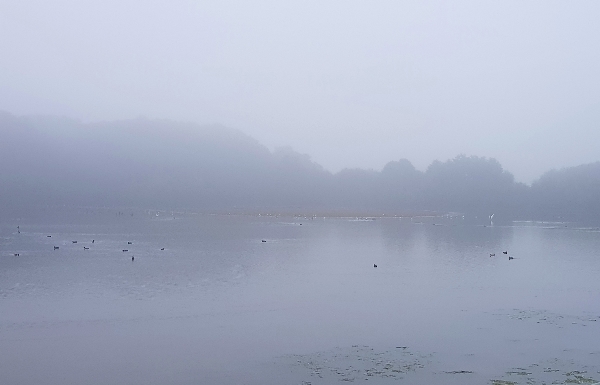 Nigel arrived a little earlier than myself and he had already found one of our target birds, the Spotted Redshank, whilst I was looking for it he found a single Ruff. As the mist began to thin out we saw more waders at the back of the pool at Herriot’s Bridge, we saw 6 Green Sandpipers, 3 Black-tailed Godwits, a Greenshank, two Common Snipe and a Water Rail. 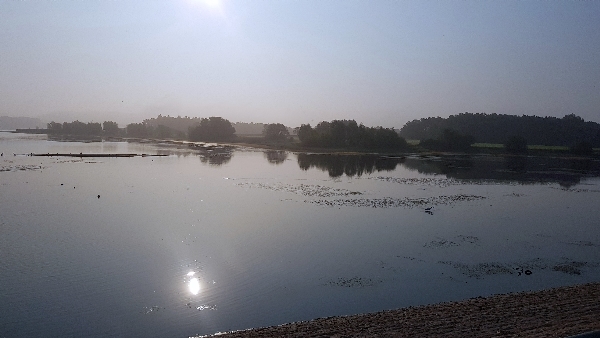 early morning views of the perfectly calm and still lake 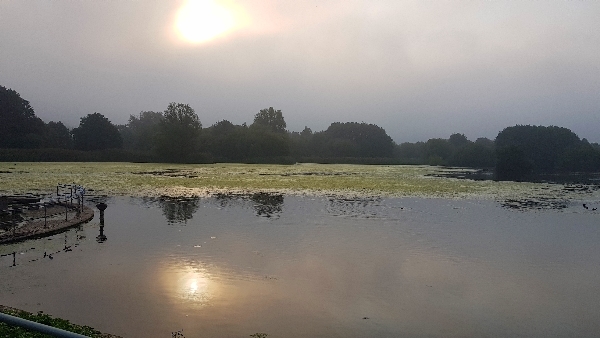 The Pool was covered in common species of ducks, Coots and Moorhens, small numbers of Pintail and Shelduck joined them. A Great White Egret stood tall above Grey Herons, Little Egrets and to our great delight 3 Cattle Egrets. On the other side of the road we scanned the channel leading into the lake itself, a Kingfisher fished from perches in the reeds, a Grey Wagtail fed on the bank and both Little and Great Crested Grebes were added to our list. 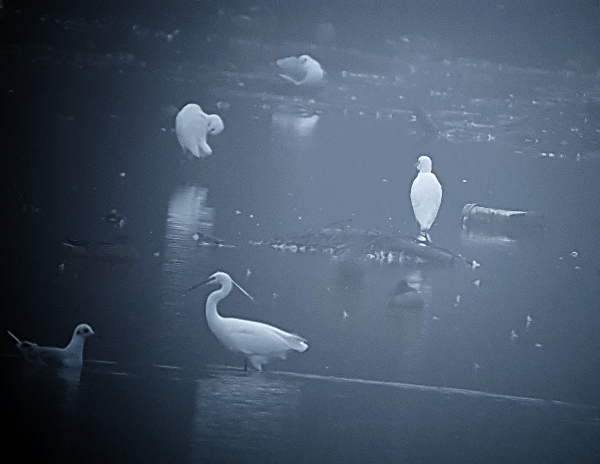 Little Egret with two Cattle Egrets behind it 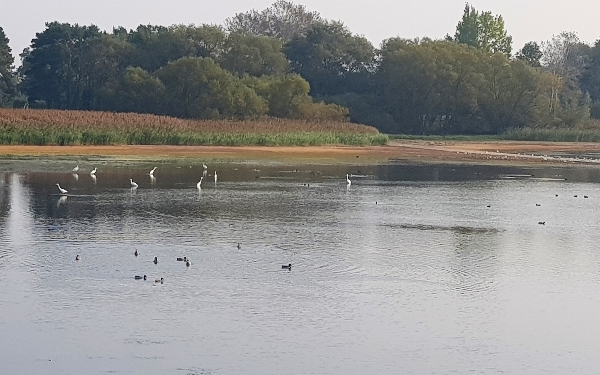 a cluster of Great White Egrets

We drove around to Heron’s Green and scanned from both sides of the road, we saw 12 Great White Egrets and added Peregrine Falcon, Raven and Common Kestrel to the day list. Nigel practiced taking pictures with his new camera whilst I helped another birder to find a Cattle Egret. 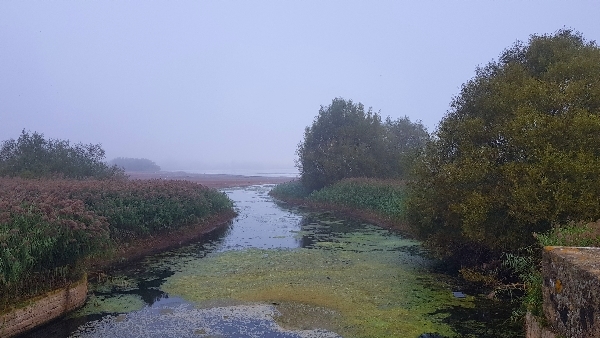 the chanel where we saw the KIngfisher 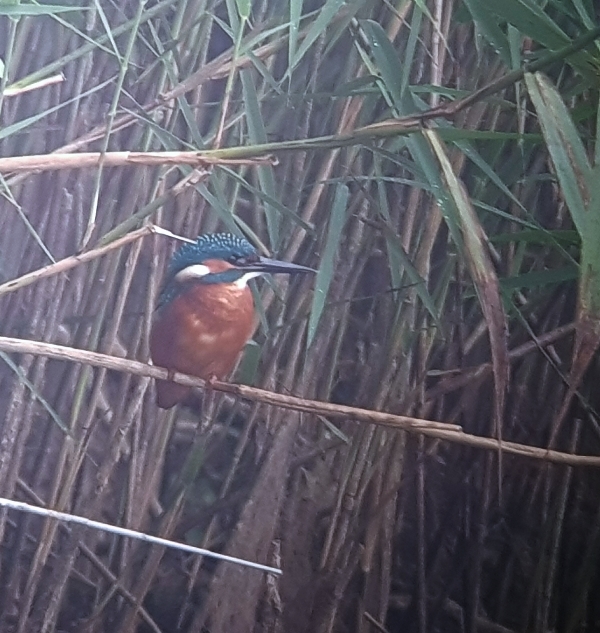 From Heron’s Green we drove round to the Stratford Hide which was unoccupied during our stay there, however, the water level on the lake is so low now that the nearest birds were 50 meters away. We had better views of Pintails, Common Snipe and Wigeon, but failed to find any new species from the hide. 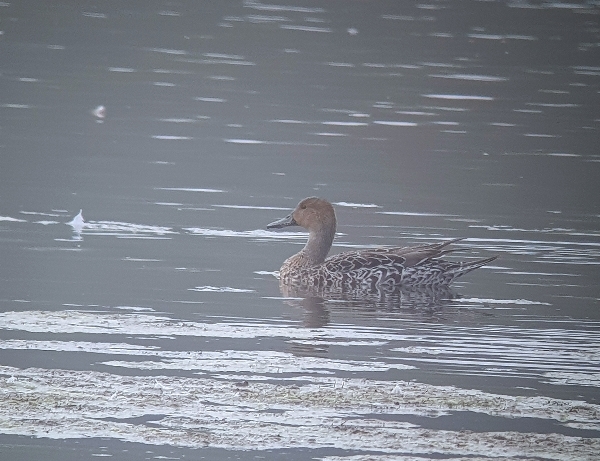 A second visit to Herriot’s Bridge was made in the hope that the Spotted redshank had woken from its slumber and was out feeding in the pool, we were out of luck, the bird remained standing on one leg with its bill and head tucked over its shoulder. 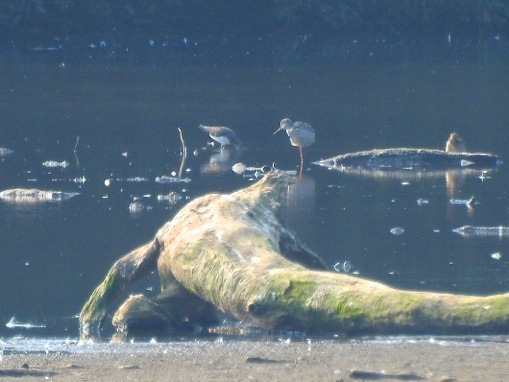 After a quick cuppa we decided to drive to Pilning Wetlands which are west of Bristol on the banks of the River Severn between the two suspension bridges that cross into Wales. We could see Nigel’s home town of Chepstow across the wide expanse of the river. We first scanned the shoreline for waders and found quite a few out there. Lots of Oystercatchers, Turnstones, Knot, Curlews, Redshanks, Black-tailed Godwits and a lot fewer Dunlin could be seen. 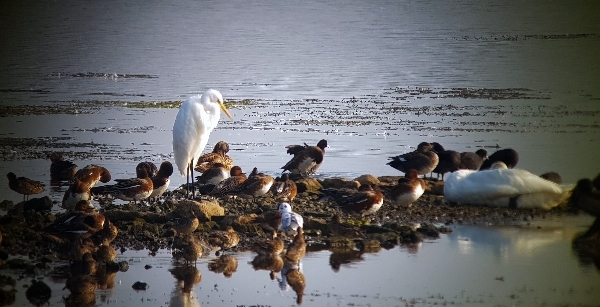 At Pilning wetlands a large area of (currently) dry marsh sits between the river and an area of small lakes with waders scrapes, on this grassy area we saw a huge flock of  Linnets, just as many Meadow Pipits, lots of Pied Wagtails and a single Yellow Wagtail. 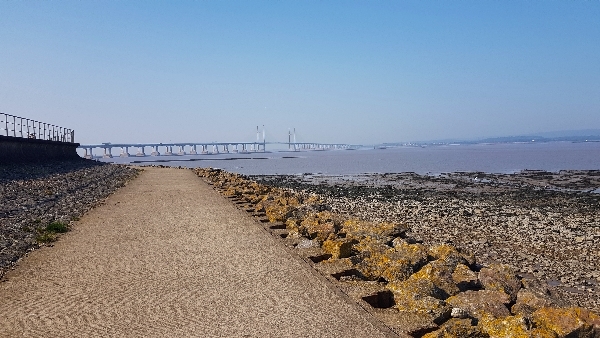 ther 'new' bridge, carrying the M4 over the Severn Estuary, the beach on the right is where we saw many waders 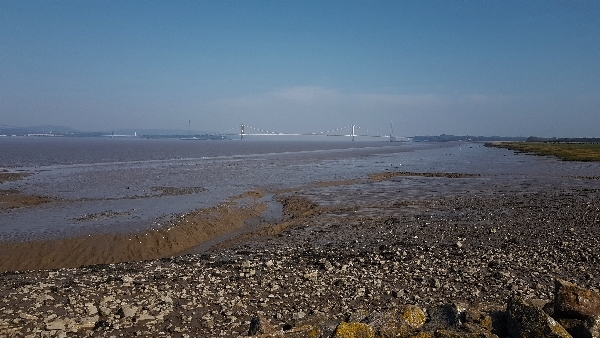 the old Bridge that takes you into Wales 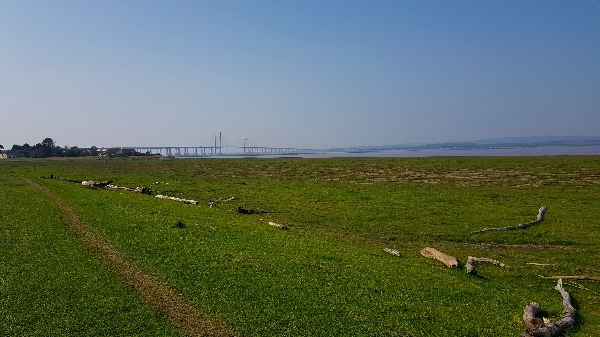 the grass marsh which id dry at the moment

We then spent a lot of time scanning the wader scrapes and small lakes for more waders with one particular wader being our most wanted bird of the day. Yes, you guessed it, Nigel found the PECTORAL SANDPIPER within minutes of us arriving and right next to it was a Curlew Sandpiper. A group of birders had been searching for the sandpiper for quite a while, but it took Nigel two minutes to show them the bird, I couldn’t get his head back into the car later on. 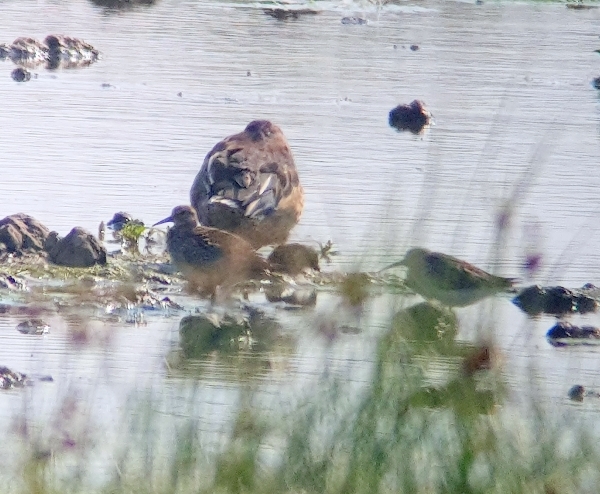 there is a Pectoral Sandpiper shown here, honest! It is with a Curlew Sandpiper and a Mallard

A juvenile/female type Garganey was also present and we spent a lot of time looking for that without success, most of the Teal were fast asleep and the Garganey usually hangs out with them. We found a few more Common Snipe, a couple of Lapwing but nothing more for the list, so we walked back to the beach area for a second scan. The receding tide was quite far out and the waders were spread over a large area, we saw lots more of the same birds as before.

It was approaching 3pm so we decided to call it a day, a successful day. After another cup of coffee and the rest of our picnic lunch we set off for home. I headed south-east into Somerset whilst Nigel headed North-west into Wales.