It was a little warmer and a little brighter today, however, I never got out until late afternoon. We had a rain shower over lunchtime which lasted for an hour or so and it was after that when I went out. I made the short journey to Sutton Bingham around 3pm I was hoping that the rain shower had dropped some birds in and around the reservoir, but I was disappointed to find nothing much. 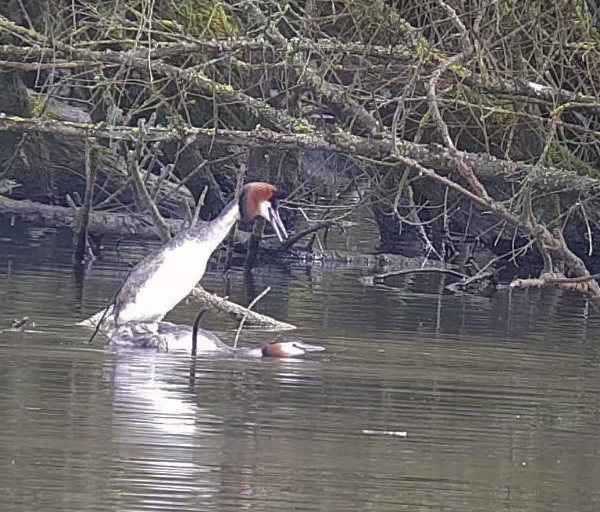 I watched the usual species from the causeway and managed to capture a pair of Great Crested Grebes mating, this is the first time I have ever filmed it. 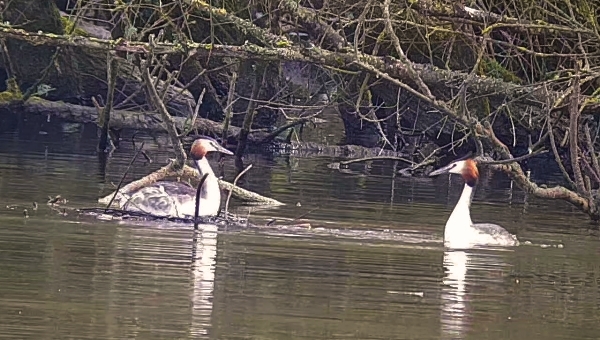 The usual array of immature Herring Gulls, L BB Gulls and Black-headed Gulls were grouped on the water and the landing jettys and in the distance, near the dam, I could see the remnants of the wintering Wigeon flock, there was about fifty showing at that time. 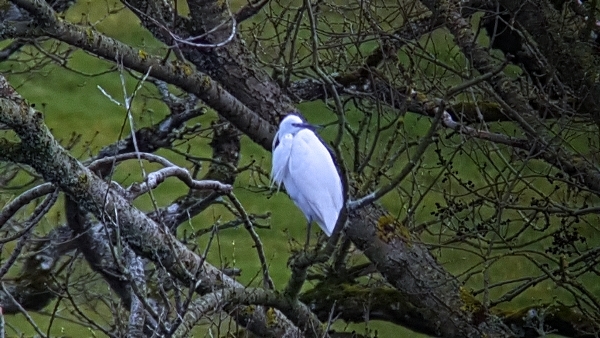 I drove round to the southern tip and could not park because a couple of vans and a bunch of workmen were busy fitting a brand new gate, the gate was about 2 meters high with a high fence either side of it, so no climbing over from now on. When a drove back to the main car park I side that the Canoe Club were also getting a new gate and the side gate into the main car was also renewed, they certain don’t want out of hours visitors.

The main car park has also lost about 30 mature trees, cut down by the Wessex Water Board, it would be great if they could spend the money on improving the wildlife of the reservoir instead of destroying it!

I walked a little way along western shore from the main car park, I couldn’t go far because all the gates were being locked at 4pm. I saw a Little Egret perched in the trees on the far side of the water with a few Cormorants and of course there were a lot more Great Crested Grebes floating around in pairs.

Nothing else appeared so I left and went home.

WEATHER: cloudy with sunny spells. Windy with temps around 10C

I never left at home at all today!!! We spent all  morning and into the afternoon talking to cars sales people, finally got the deal we wanted and we bought anew car, the stress off it!! In the meantime we had some very good bird activity in the garden, including a rare visitor which was a year tick for me. 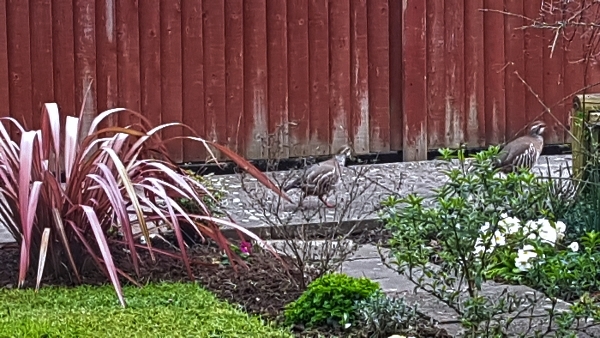 record shot of two Red-legged Partrdiges in the garden

I was on the phone at the time when I looked out of the window and saw a small bird land on the fence, it bobbed then performed its characteristic tail flicking, I couldn’t believe my eyes. The bird flew off but quickly returned to the fence, as soon as it flew I saw the diagnostic red-tail, it was a REDSTART. Grabbing my bins I confirmed tat it was a BLACK REDSTART, I held my phone up to the windows and got a couple of record shots of it. By the time I got out into the garden the bird had gone! Now I have seen both Common and Black Redstarts in my garden, wow!! 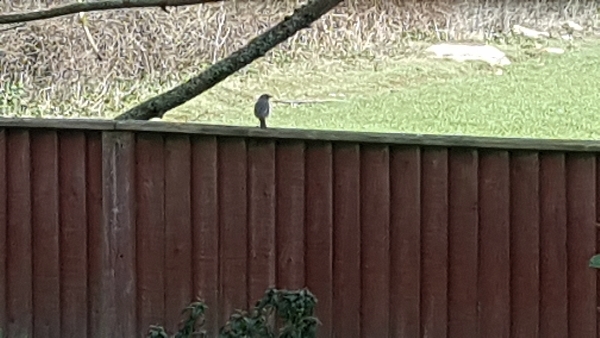 you will have to believe me, this is a Black Redstart on my garden fence!! Taken with my phone, held in one hand and through the glass of my lounge window.

Other good garden sightings include: two Red-legged Partridges, Collared Dove, Great Spotted Woodpecker and Goldcrest. I also saw Fez the Pheasant, Crow, Jackdaw and Magpie on the lawn, whilst sightings in the bushes and sycamores was: Robin, Dunnock, Goldfinch, Chaffinch, Blue and Great Tits.