Today I met up with my Welsh buddy Nigel at Chew Valley and we both got a soaking, I knew it was bad luck meeting up with a Welsh blokey.

I set off  at 6am and drove most of the way without rain, I stopped off at a place near Chew Valley to look for Tree Sparrows, Yellowhammers and Skylarks. The visibility was pretty awful and the drizzling rain did not help, but I persevered and soldiered on.

I didn’t see much at all, except for corvids, a huge mixed flock of Jackdaws, Rooks and Crows flew around very noisily until they finally settled in some trees. I saw Dunnock, Chaffinch, Blue Tit and Magpie before I got a very brief glimpse of a Tree Sparrow. The bird did not stay around for its photo to be taken. A distant Greenfinch was all I got on the way back to the car, the rain came down heavier as I pulled away. 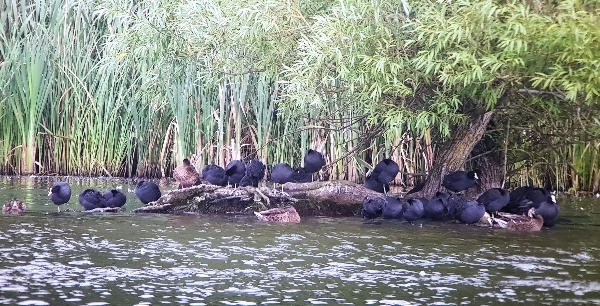 The Collective Noun for a gathering of Coots is a 'Raft' but these guys seem to had made a differet type of raft?

I met Nigel at 7:45 at Herriot’s Bridge, Chew Valley Lake, it was a little brighter but not much drier. Nigel had spotted several species before I got there and pointed out a few of them to me.  Four Green Sandpipers and Two Great Egrets grace the pool along with dozens of other birds, I think I listed 20 species there including: Green Sandpiper, Teal, Shoveler, Shelduck, Gadwall, Tufted Duck, Mallard, Canada Goose and the three large gulls, Great Black-backed, lesser Black-backed and herring Gull. Black-headed Gull was also present but we could not see a Mediterranean Gull or Yellow-legged Gull both of which had been reported Yesterday. 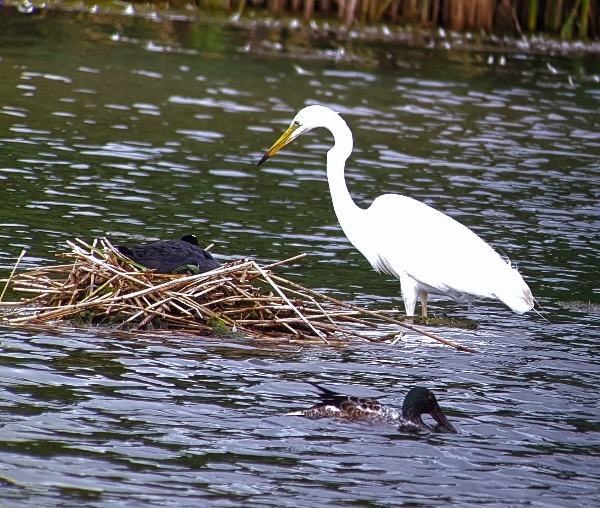 Great Egret with Shoveler in the foreground and a Coot on a raft of reeds! 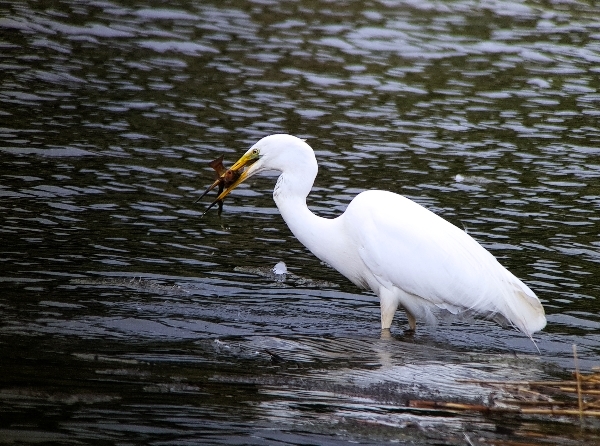 can you name the fish?

Nigel remarked on the huge number of Swifts in the sky above the main body of the lake, there were dozens up there, we also picked out many House Martins and a few Sand Martins. Before we moved off Nigel served up coffee and cakes, I knew I brought him along for some reason, what a top bloke. 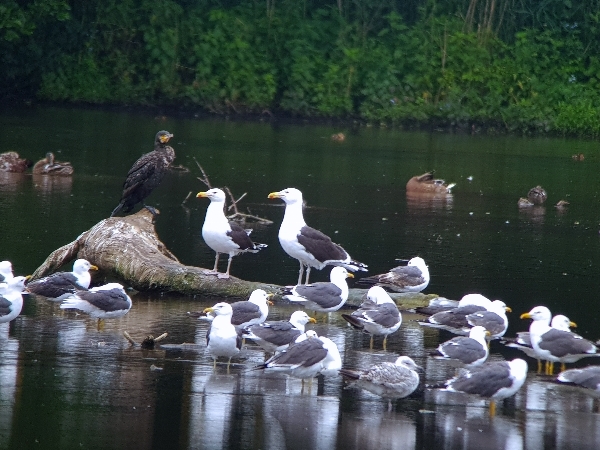 Collective noun for a collection of gulls is a 'colony' or a 'screech' - I'll go for the second option. we have Great BB and Lesser BB with a single juvenlle Herring Gull. Mallard and Teal behind them and a Great Cormorant above the gulls

Our next stop was at Heron’s Green, where a smaller pool lies on one side of a causeway and the main lake on the other, very similar to Herriot’s Brdige. We did get a bit of a soaking there, it was also a little windier and many fishermen we out in, or on, the water which meant fewer birds. 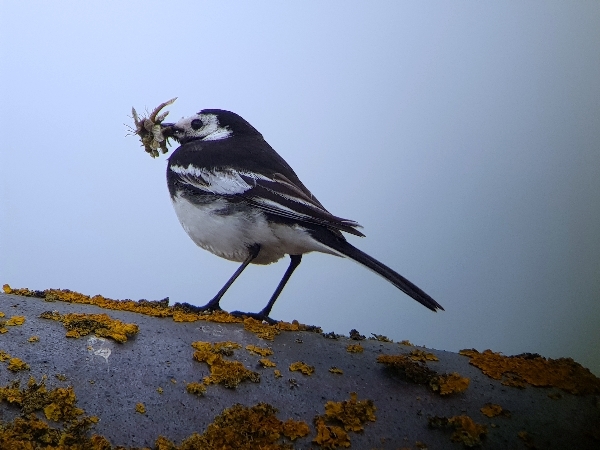 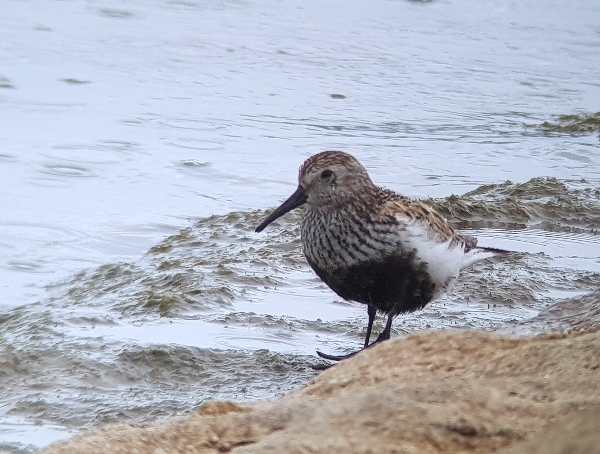 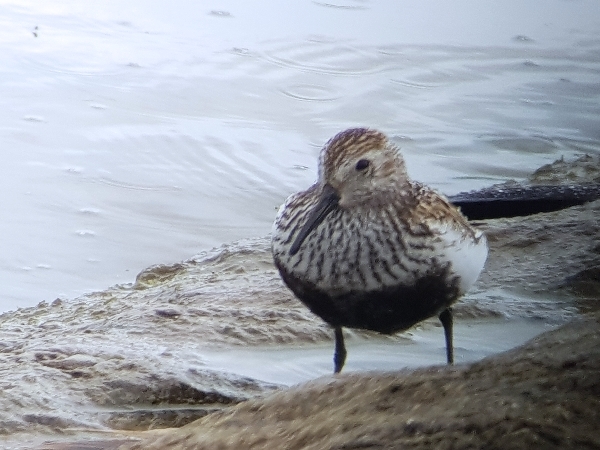 The rain drove us away, so we drove around to the dam. From the car park we had a much better visit because the rain stopped for a while. As we got there a Dunlin landed on the base of the dam, it must have been the same bird as seen at Heron’s Green, it certainly looked the same. 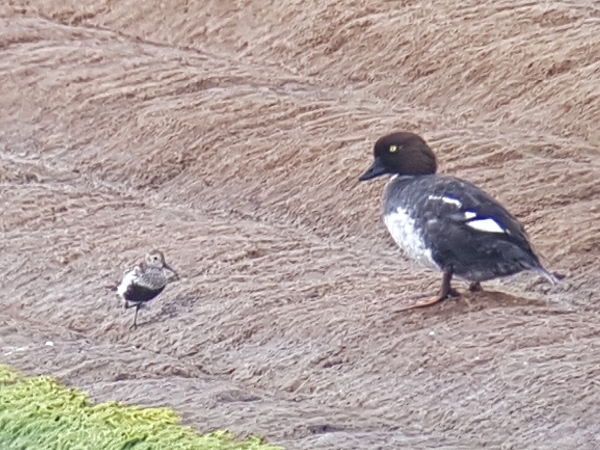 Dunlin and a female Goldeneye

We added a Goldeneye to the list!!! A Goldeneye is essentially a winter visitor so there must be some problem with this individual ( we later found out that was the case). Nigel forced me to tick an Egyptian Goose and apart from seeing a lot more Pied Wagtails and hundreds of Swifts we didn’t see much else there. Nigel also forced a second cup of coffee on me and gave me a packet of chocolate sweets, it was bliss!! 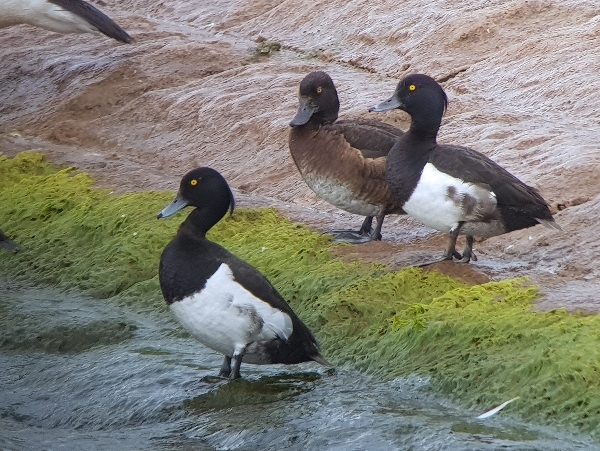 We paid a second visit to Herriot’s Bridge in the hope that one of the uncommon gulls had turned up but we had no luck with those. It was 10:30 we parted company and went our separate ways.

For Nigel the birding wasn’t over because he stopped off at Severn Beach (on the banks of the estuary of the River Severn) he sent me a nice list of waders that I had missed, how nice of him!!

During the afternoon the weather picked up and sun broke through, Dawn and I visited her sister who was house-sitting near Corscombe, about 3 miles from home. During a walk in the gardens of the house I added Eurasian Nuthatch, Great Tit, Stock Dove, Chiffchaff and House Sparrow to the day list.