It was a much better morning today, the sky was practically cloudless when I first set off but more importantly there was no wind, the trees were perfectly still. At the beginning of the track a Green Woodpecker flew from one telegraph pole to another, but he never waited for me to get prepared for a photo session, off went the impatient noisy beggar. 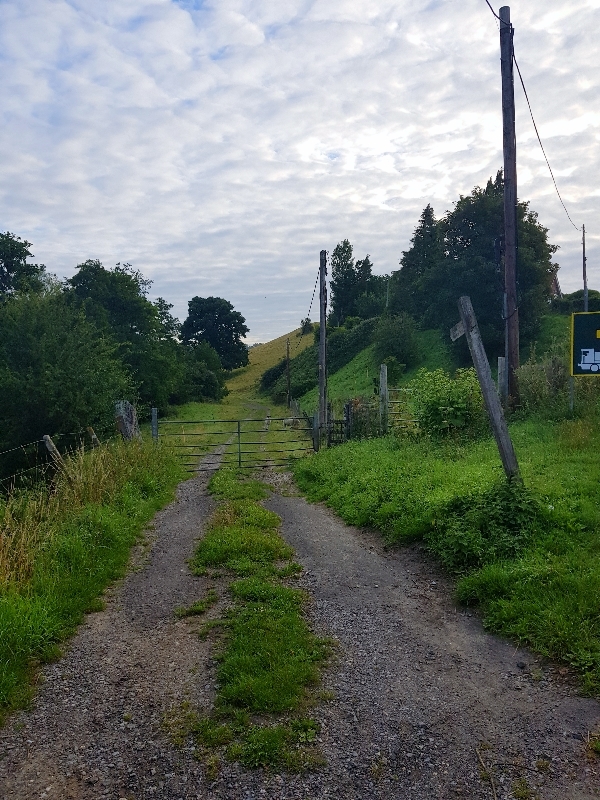 I heard Blackbird, Blackcap and Wren during the first part of the walk, a Collared Dove was cooing and a single Swift flew over. A little further along the track I saw a Dunnock, then a Great Spotted Woodpecker appeared for a brief encounter, a second Wren was singing and a Pheasant called from the wheat field on the other side of the stream. 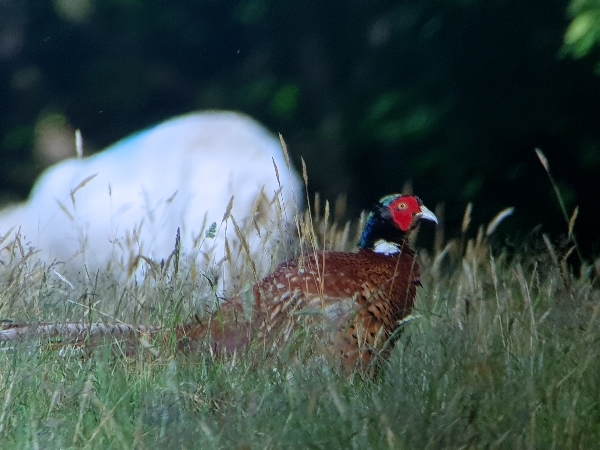 On the stream I found a little flotilla of Mallards. There were five of them, three females, an eclipsed male and a juvenile, this is the largest number of Mallards I have seen on the stream. As I left the Mallards a Nuthatch starling calling ahead of me but I could not locate it in the dense canopy. 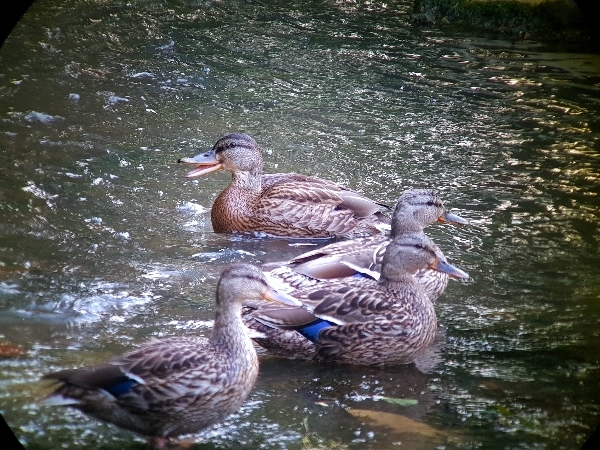 four of the five Mallards

A third Wren called and I could hear a Song Thrush singing from way down in the valley and I knew exactly where he would be sitting, a pheasant flushed from the grass ahead of me and flew over the stream into the wheat field to join his mate.

As I approached the confluence of the stream and the River Yeo I watched a family party of Blue Tits and the sun finally shone, a large patch of blue sky was above me, but not for long. I saw the Song Thrush in his usual place before I set off along the river bank towards Rook’s Hill and the bramble slope. 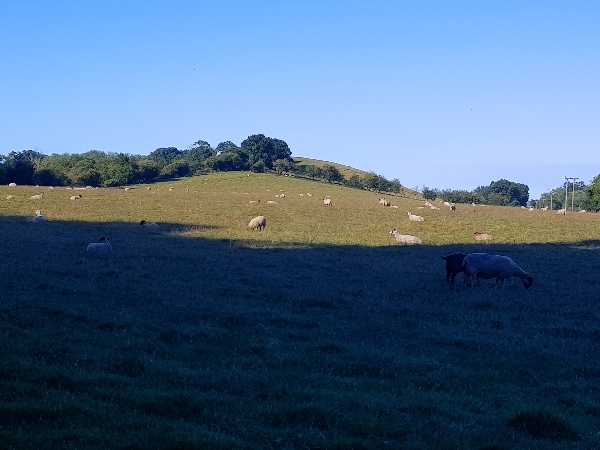 Looking back to the meadow-side of Rook's Hill, it is much steeper on the other side behind those trees

After I couple of hundred meters I saw movement down by the riverside and glancing down I saw an American Mink. All black with a white chin it starred at me for a few seconds and began to walk along a fallen tree. I quickly walked back for about 50 meters, set up my scope, focused it on a shingle bank and as I got my phone out of pocket the Mink walked onto the shingle. It hurried along and disappeared into some undergrowth, it was quick for me. I tried a second manoeuvre but he never showed again. This is the third encounter \i have had with a Mink along this river, the last was a lght shade of brown and was definitely a different individual. It is a shame that we have mink here because they tend to kill Water Voles and anything else they can get their teeth into. 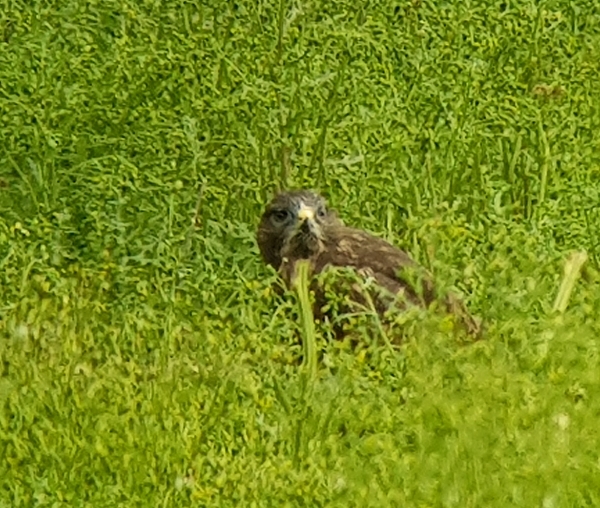 By 7:30am I was around at the bramble slope where I heard Wren number 5, Blackbird number two and I saw Great Spotted Woodpecker number 3. It was lovely just standing watching the activity on the slope. Two Blackcaps were singing from either end, a Chiffchaff sang from quite close to me and both Blue Tits and Great Tits fed in small groups. I was hoping for a Long-tailed Tit flock, but one did not materialise.

With such nice still conditions a few butterflies were on the wing, I saw a lovely fresh-looking Comma sitting on some sheep’s poo, it was taking on board salts and minerals, how nice. I then found my first Small Copper of the season and lots of Meadow Browns 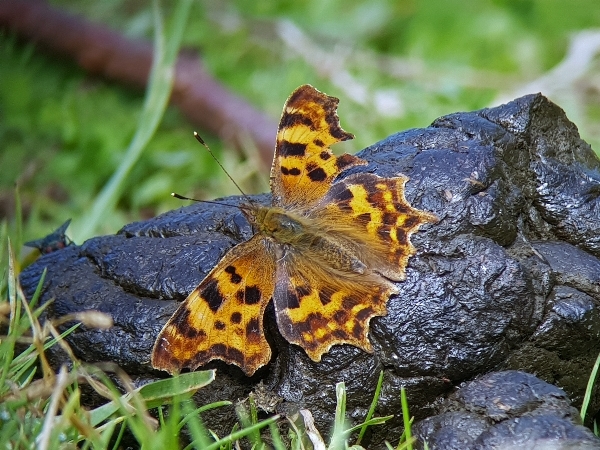 As I climbed up the steep slope of Rook’s Hill I scanned the oak canopies and the bramble flowerheads for Purple Hairstreak butterflies without much luck, a consolation was the sighting of a Eurasian Sparrowhawk which is number 72 on my July species count. 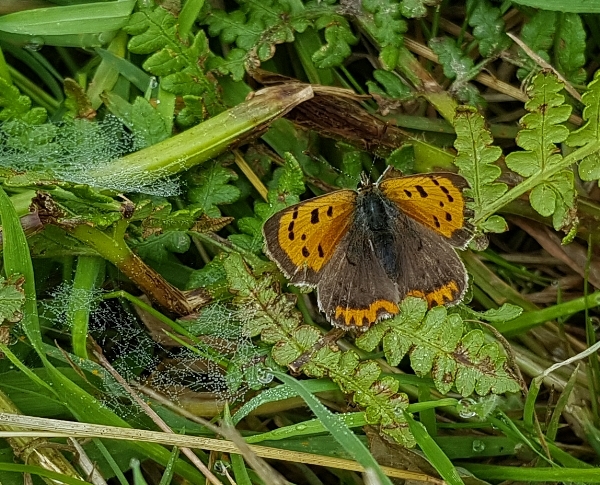 As usual it clouded over and a breeze picked up, that was my cue to leave and so I did. It was almost 10am when I got back, I had been out nearly 4 hours, where had all those hours gone!!!