I have a real craving for Wader spotting and when my good birding pal Nigel Bleaken suggested that we went out today I jumped at the chance, we both wanted to see waders and there was a Spotted Redshank reported at RSPB Lytchett Fields, so that is where we headed.

Nigel got up very early and drove from Wales across into Somerset and arrived at my place just before 6:30 and off we went in separate cars, the journey to Lytchett Fields near Poole took 50 minutes (38 miles) a lot of the journey was on fast A roads. 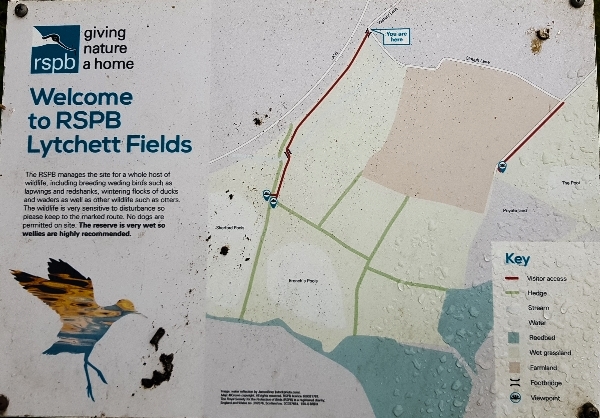 We arrived around 7:20, we had to leave the cars on the side of the road about 1 ½ miles from the reserve because of lack of parking near the reserve, you have to walk along private roads with very expensive looking houses hiding behind well established hedges. Many common birds we seen en-route, Blackbird, Robin, Dunnock, Blue Tit, Great Tit, Goldfinch, Crow, Jackdaw and we heard a Song Thrush.

Once we had past the houses we scanned a field with a small pond in it, there we saw Canada Goose and Moorhen, finally we got to the entrance of the reserve which was right next to the elevated A35 duel carriageway, it was busy and very noisy.

The path across the first section of the reserve takes you along a grass meadow with some gorse, a Common Stonechat sat on top of the first bush and some Goldfinches fed on some thistle seeds. Black-headed Gulls were dotted about on the marsh ahead of us and we could see into part of Poole Harbour (which is the largest natural harbour in the UK and only second behind Sydney Harbour for being the largest in the world) ), many gulls sat out on the mudflats, the tide was out. 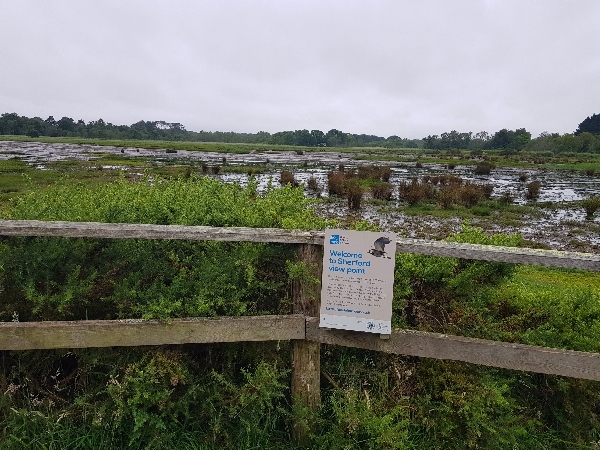 Lytchett Fields are just tidal marshes having two viewing points but no facilities except for a couple of barrier fences where you can rest your elbows as you scan the marshes. A thick hedge of bramble and hawthorn provides a little shelter from the wind. During the latter part of the walk to get to the viewing points we saw and heard Reed Warbler, a few Pied Wagtails and a lot more Black-headed Gulls.

Once at the viewing points we set up our scopes and scanned the open marsh area and quickly found Little Ringed Plovers, there were four of them, three adults and a juvenile bird, very nice to see. Then Nigel found a Common Redshank, it had a broken wing and I guess that is why it was there and not in the harbour with the rest of the wading birds. 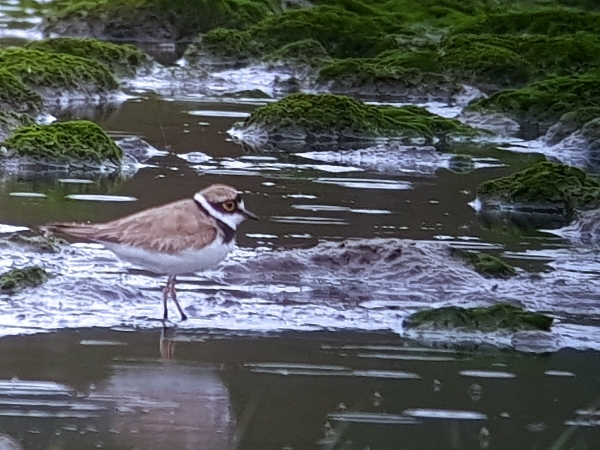 After 30 minutes or so it started to rain, it was a light shower, we never got a soaking. But it did make us realise that we were not going to see many birds on the marsh until the tide came in. High tide was not for another four hours!! So we made a decision to visit a Country Park just a 10 minute drive away, there were paths in the park that gave you great views of the mudflats in part of the massive harbour. 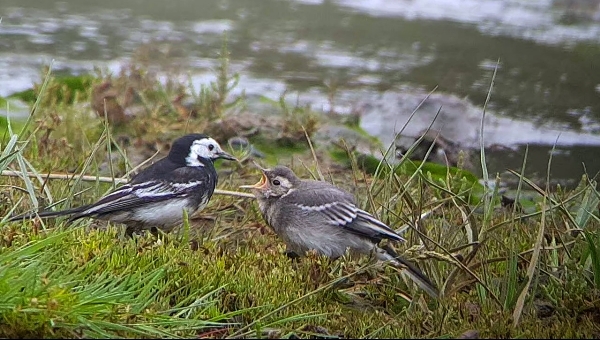 As we walked back to the car a walker stopped for a chat and he told us of another track where he had seen several “sandpipers”, he wasn’t a birder, we didn’t really know what he had seen. So we changed our plan and decided to go where he directed us but not before we had gone back to the cars for a cup of Nigel’s Coffee, a chocolate bar and a muffin, what a great guy for having a boot full of goodies. 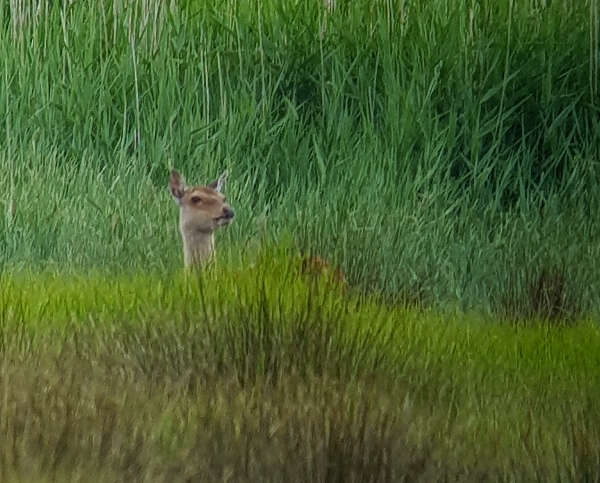 We followed the directions given to us by the ‘walker’ and we did indeed find ourselves on the edge of Lytchett Bay looking into the harbour, the tide was coming in fast so much of the mud was now under water. We did find a few species there such as, Eurasian Curlew, Eurasian Oystercatcher, Black-tailed Godwit, Common Shelduck, Great Cormorant and four species of gull, but no sandpipers.  In the reeds we saw a couple of Reed Warblers and a pair of Reed Buntings. 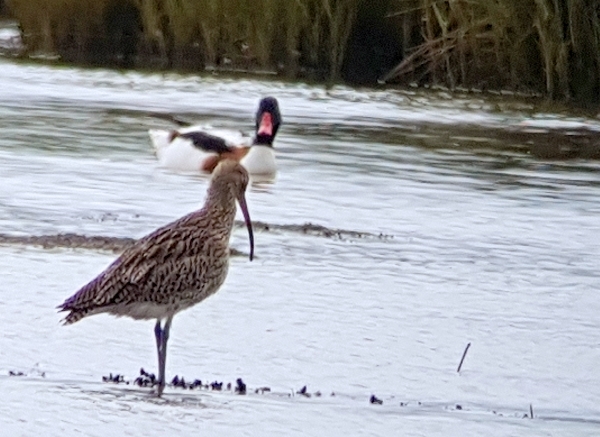 Eurasian Curlew with a Common Shleduck seen in Lytchett Bay

So after that diversion we walked back to the viewing points on Lytchett Fields and saw a lot more birds as the tide came in. I counted 29 Redshanks in all but there may have been more, a couple of Eurasian Curlews came in too and a single Common Greenshank was a nice wader to see. We searched for the Spotted Redshank, which, we were informed by another couple of birders, had apparently been seen during our absence!!!  Doh!!

Over the next hour or so we spotted a Common Kingfisher, a single Common Sandpiper and Nigel found a single Green Sandpiper but we only saw it in flight. More Shelducks dropped in, a bunch of Eurasian Teal fed in the mud with Mallards and the Black-headed Gull numbers built up to over 100. 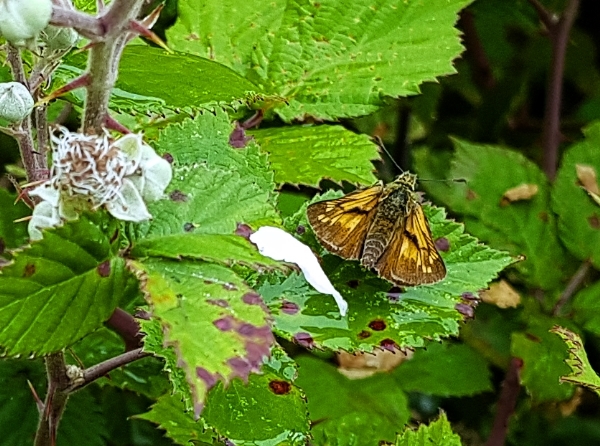 Large Skipper see in the bramble hedge in Lytchett Fileds

We had to leave before 12 because my darling wife had an appointment with her hairdresser and boy we did not want her to miss that, she needed the car to get there. Nigel left 15 minutes before I did and he missed a Marsh Harrier but not the Spotted Redshank, I never saw it!!

It seemed a long walk back to the car, we had covered 6 miles this morning and poor old Nigel was a little worn out! Back at the car we had a second cup of coffee and a second chocolate bar.

We arrived home with plenty of time to spare, a nice cuppa was enjoyed as we sat out in my garden watching Buzzards, a Sparrowhawk and House Martins. Nigel left at 2pm, it would take him 1 ½ hours to get home, a long day and no Spotted Redshank to show for it!!