I delayed my walk for an hour or so because of the rain but I still got a soaking whilst I was out there! But despite this abysmal weather I had a superb spot of birding, especially along the River Yeo at the back of Rook’s  Hill.

Not even a Blackcap was singing this morning as I walked round to the valley, I heard a distant Song Thrush, a Robin delivered a half-hearted bunch of notes and a Blackbird just a couple of phrases. The Sheep in the two meadows looked pretty miserable as I made my way down the valley. 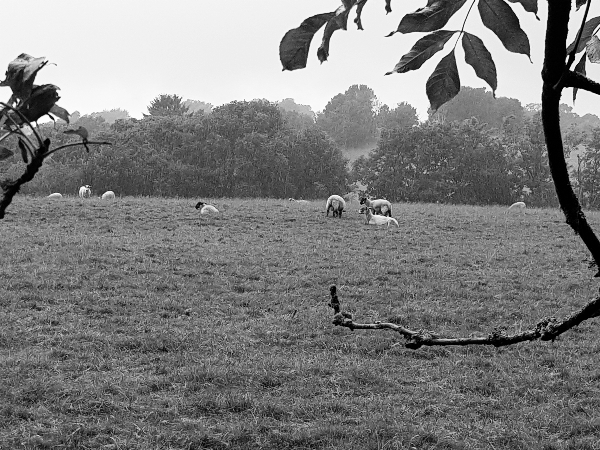 I never took a single picture until I was forced to shelter from a heavy downpour, it was grim up to that point. Then the rain stopped, the sky got brighter and sunshine poked through the clouds. Everything suddenly came alive, a Grey Heron crossed the meadow, a pair of Stock Doves flew over me and a Wren burst into song. It was the call of the Green Woodpecker that made me hurry along to the Bramble Slope on Rook’s Hill.

THE GREEN WOODPECKER SHOW FOLLOWS BELOW: 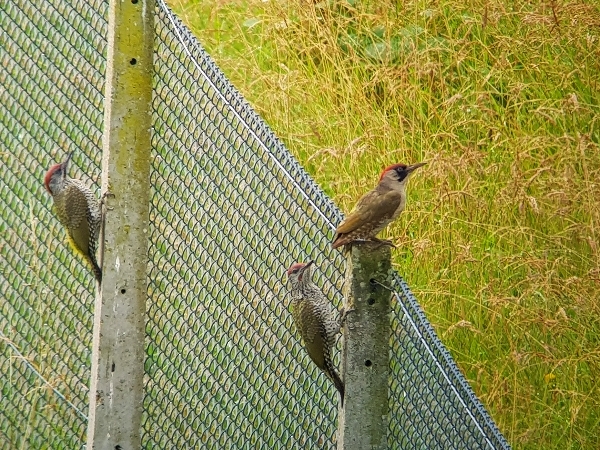 Mummy with two of her 'chicks'

I then spent a memorable hour enjoying some of the best ‘lockdown’ birding so far!! I positioned myself on the slope looking down to the River Yeo and the meadow on the other side of the water. Just across the river stood the large dead tree and down to the right was ‘The  Fence’. This fence has featured in many of my blogs because of the number of species that I have seen sitting on it. In fact, only the other day during our meeting at Ham Wall, Mr Kevin Jones mentioned the fence when he ridiculed me for being an obsessive ‘lister’. 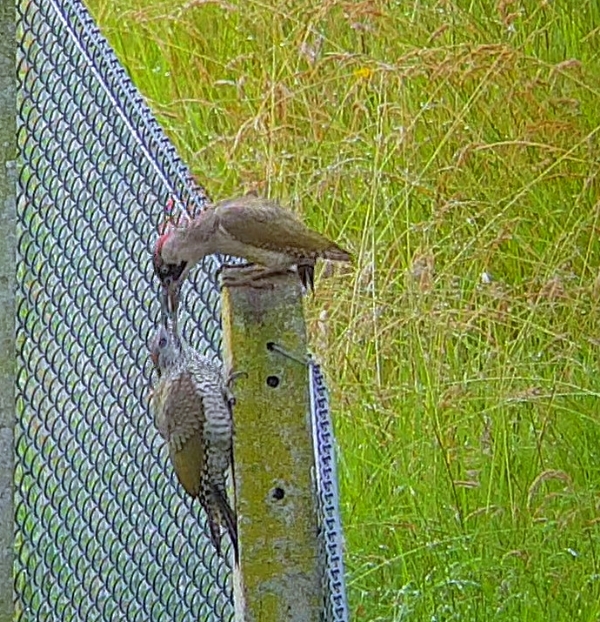 Well that is not true, I do love trying find as many species as I can for any given time or place, but the list doesn’t have a great importance to me, in fact, the day after I have made it, it is usually forgotten. I love setting myself a target, a personal challenge, and I do my best to fulfil it. Anyway today, not only did I collect a good ‘fence’ list but one of the species sitting on it was a year tick and became number 100 for my July list! 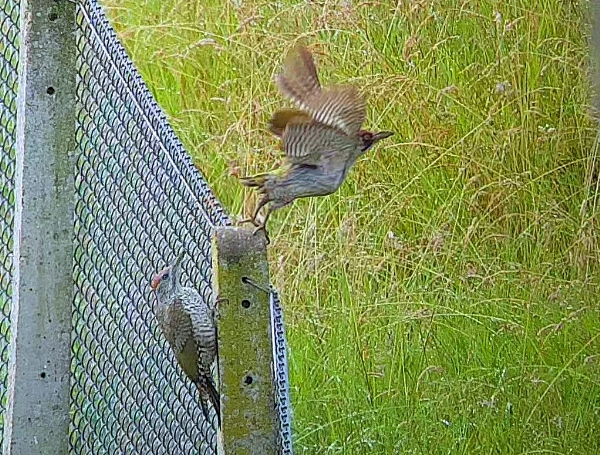 As I said earlier the Green Woodpecker was calling and suddenly a whole family party of them appeared in the field on the other side of the river, five Green Woodpeckers, wow!! Four of them landed on my fence and became species number 10 to do so!. I watched them for ages, the parents (mainly mother) would fly down into the field and dig up some ants, then fly back to the fence and feed them to the kids. I use the word ‘kids’ loosely because these birds have been fledged for nearly a month and apart from a lot of speckling, they are virtually the same size and colour as the parent birds. 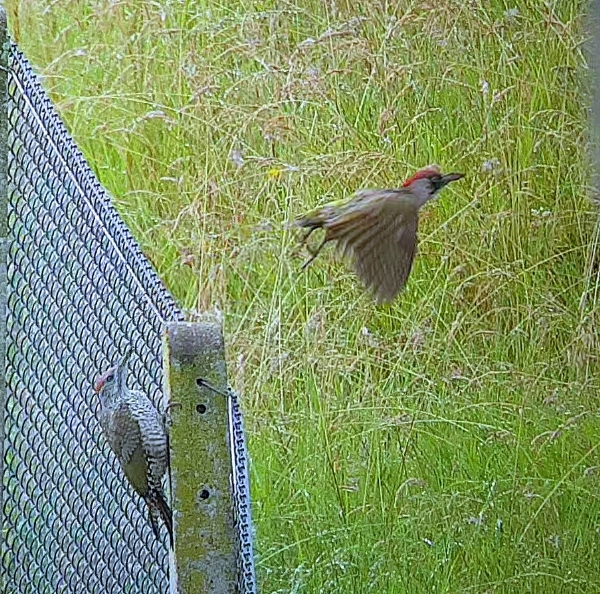 It was great fun watching them and to see the reaction of the other local species. Wren, Robin and Dunnock all came up close to the woodpeckers to have a closer look, a Blackbird and a Song Thrush were more cautious. A Common Chiffchaff took no notice and a family party of Common Whitethroats landed not too far away, also on the fence. 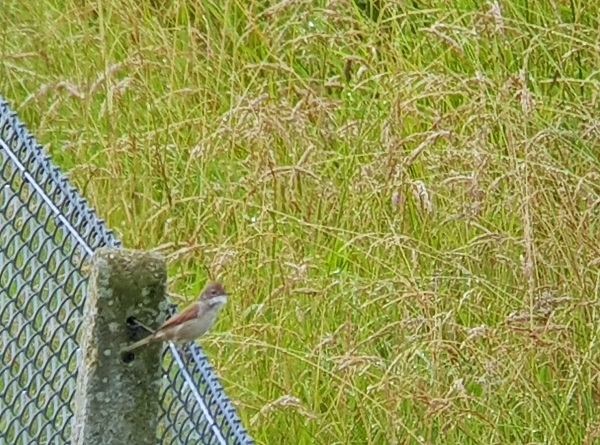 Two of the Woodpeckers appeared in the dead tree and looked bemused when a group of Goldfinches landed very close to them but them my star bird arrived on the fence. 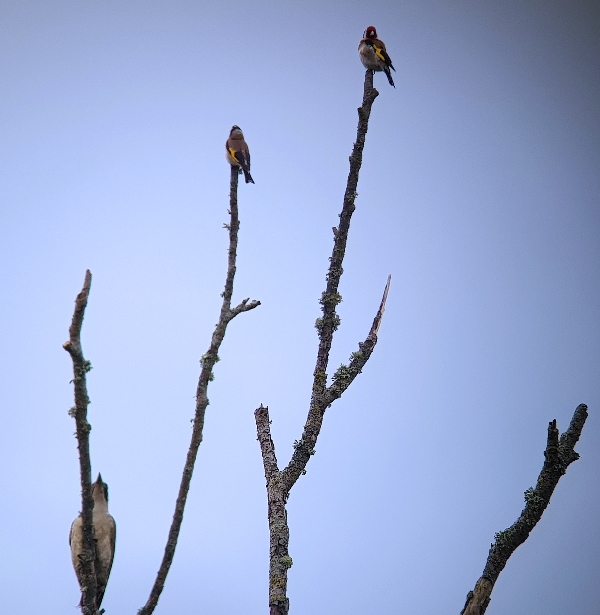 Green Woodpecker with Goldfinches in the dead tree

Yes!!!  A LESSER WHITETHROAT landed on the fence and began working its way towards me. It reached the end of the fence and jumped about in the bushes before re-alighting on the fence. It gave superb, but distant views. 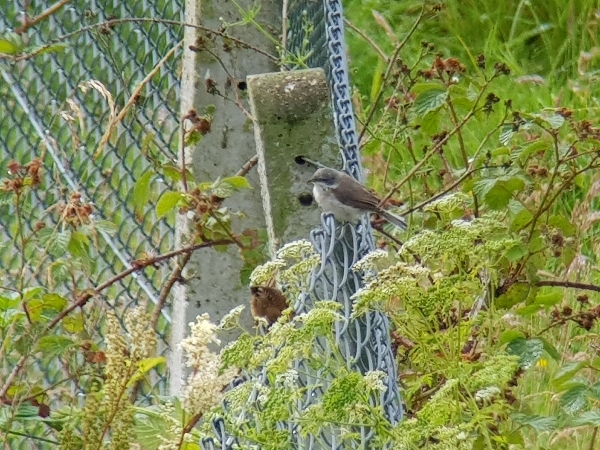 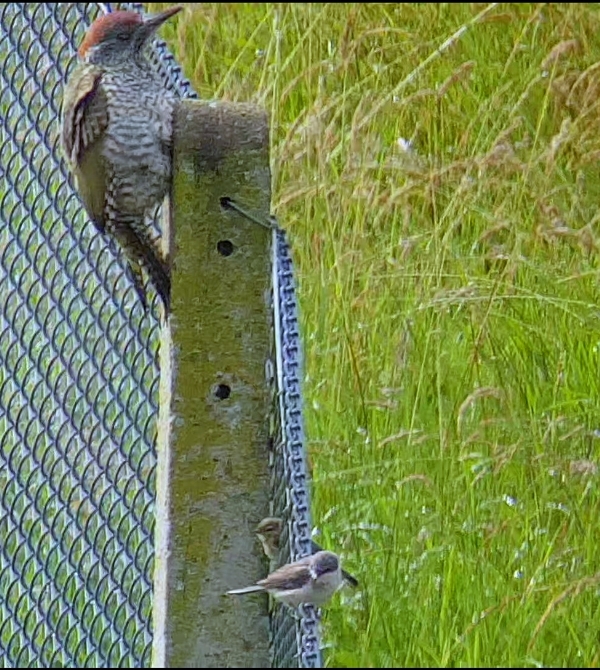 A Woody, Chiffchaff and Lesser Whitethroat 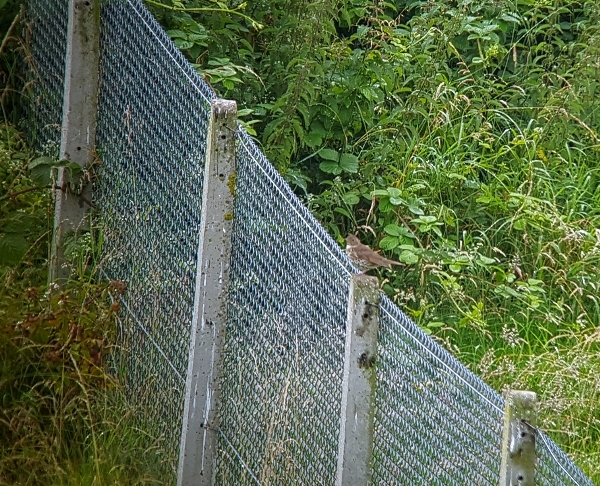 Song Thrush on the fence

That is nine species just for today and all on the fence!! I am pretty sure that brings to the total Fence list to 13 (Wood Pigeon, Linnet, Goldfinch and Mistle Thrush being the other four).

I was well made up, I march up to the top of Rook’s Hill and down the other side. The warmer weather had brought out a few butterflies:  Gatekeepers and Ringlets are now quite abundant, I also saw Meadow Brown, Large White, Brimstone, Red Admiral and Peacock.

Later, during my exercise walk through the village I noted over 20 Common Swifts flying up on high as well as the usual common species.