The air was full of drizzle instead of bird song as I walked round to the valley and it wasn’t until I got to the stream that I heard anything but a brief song from a Blackcap and an even shorter one from a Robin. The Wren done himself proud by singing its whole song, chorus included. My first plan was to set up my wildlife night-vision camera hoping to film the Otters.

My wildlife camera has been of very little use to me since I received it as a gift on father’s day and that is because of my own incompetence!! I had a modicum of success in the garden but very little when I have left out in the valley. One time I left out the memory card, doh! Another time I never pushed the card in far enough, doh! Last time I set for photographs instead of video and got 180 pictures of a Fox over a 15 minute period. Today I think I set it up correctly, so fingers crossed.

Walking on I found a juvenile Grey Wagtail down on some pebbles in the stream, so I filmed it because I guessed that an adult would be along soon to feed it. Sure enough after a few minutes that is exactly what happened. Just along the stream from there I could hear a lot of calls coming from the dense foliage of the ash and willow trees. From a 10 minute watch I found only two species, Great tit and Blackcap, both were feeding in large family parties. 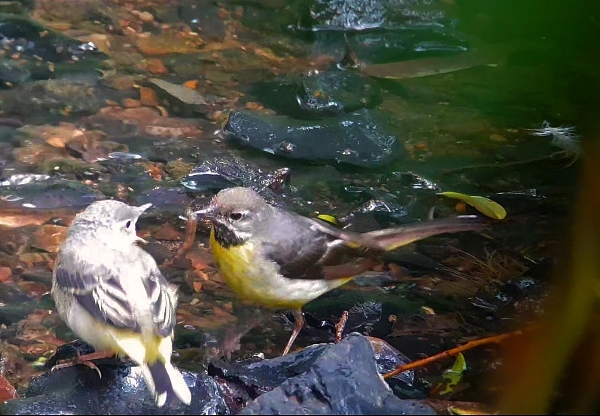 if you want to see a short video of the Grey Wagtails click this link:

As the cloud thickened and the sky drew darker I decided to take a short-cut and miss out the second meadow and most of the River Yeo walk. So, I followed the hawthorn hedge up to Rook’s Hill and over to the bramble slope. I did walk along the river for a short distance and found a juvenile Common Moorhen!! This was only my second patch-record of this species, a mega sighting!! Things were looking up.

The 'dead tree' and 'fence'

I walked back up the slope and positioned myself so that I had good views of both the ‘dead tree’ and the ‘fence’ I intended to watch them both for an hour or so because yesterday’s sightings were so good. I hadn’t seen much until then but the ‘fence’ and the dead-tree threw me a lifeline today and produced some excellent birding memories and yet again another new bird for patch list!! 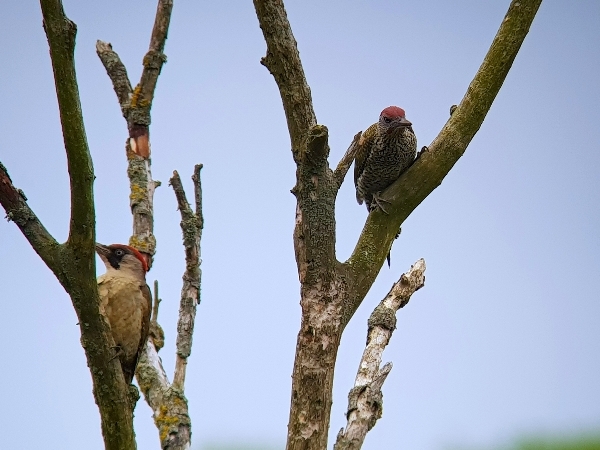 Today I saw eight species sitting on the ‘fence’ Common Whitethroat, Green Woodpecker, Dunnock, Robin, Blackbird, Chiffchaff, Great Tit, Wren and the new species mentioned below. In addition I saw Jay flying along the tree line down the river, a Raven called several times from further up the slope and a pair of Buzzards circled behind me. 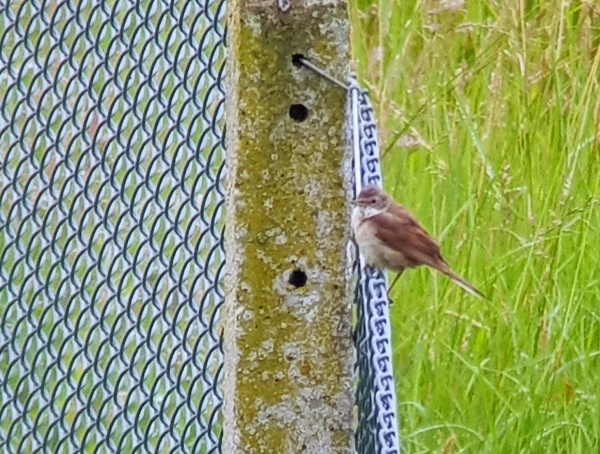 today's Common Whitethroat on the fence

In the dead tree I watch both Green and Great Spotted Woodpeckers, a small flock of Goldfinches and a Song Thrush landed low down for a short while. A noisy commotion signalled the arrival of a Eurasian Sparrowhawk, the Green Woodpeckers scattered and the Goldfinches, in sheer panic, shot off in all directions. Unfortunately for me the Sparrowhawk only landed for 20 seconds or so. 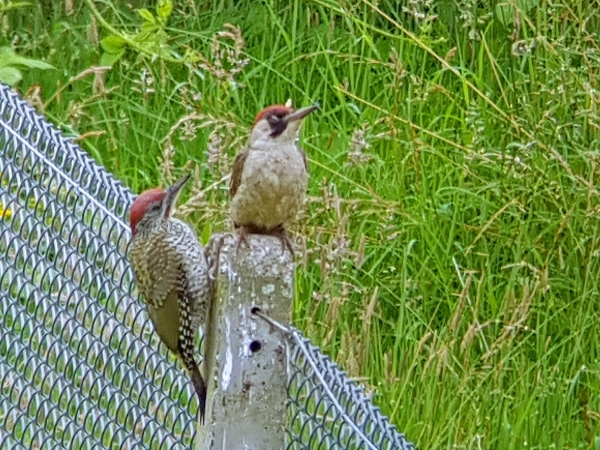 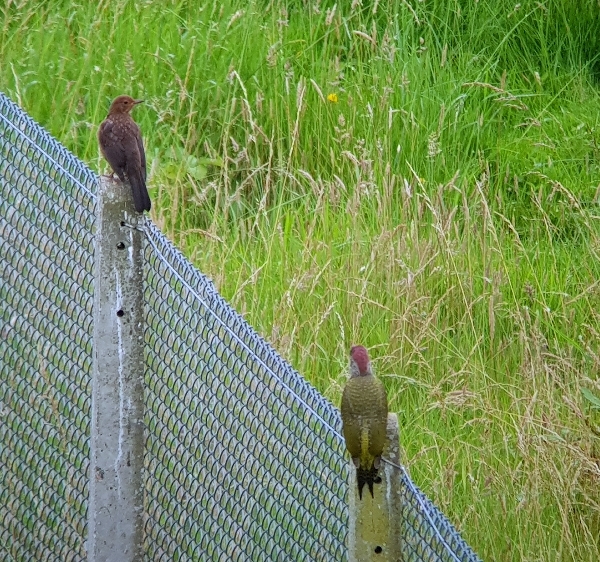 The ‘fence’ has thrown up a lot of surprises and my next surprise came in the shape of a SEDGE WARBLER!!  Another new species for the patch!! My god what is happening here? Did I miss these species all spring or are they on the move now? Well the Common Whitethroat is definitely breeding as I saw both adult birds carrying food. The Sedge Warbler did perch on the fence three times but I never saw it carrying any food and the Lesser Whitethroat yesterday was just foraging along the fence and the scrub, so who knows? 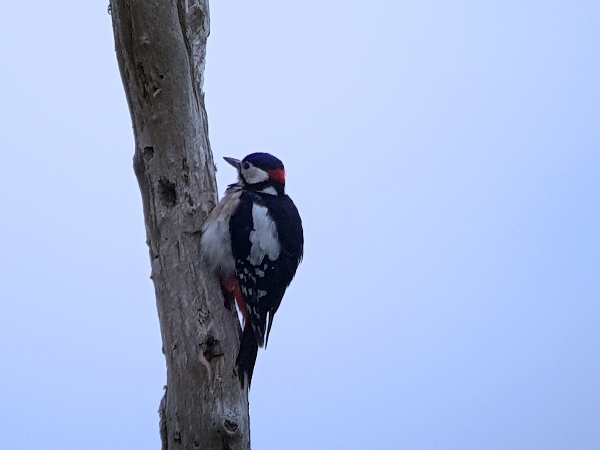 a Great Spotted Woodpecker turned up in the dead tree

The Sedge Warbler did not wait around for me to get ready to take its picture, it was off and this happened three times despite me being on full alert, the problem was that the bird landed in three different places along the fence which threw me as I wasn’t expecting that. I waited for another 20 minutes for the Sedge Warbler to reappear but it failed to show. 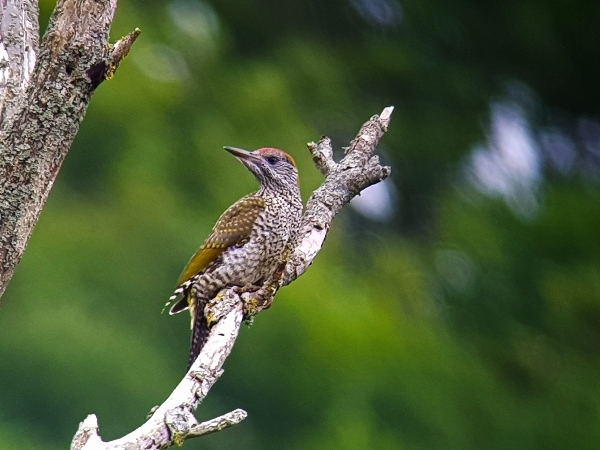 the plumage of the juvenile Green Woodpecker is just stunning

Once again I was well made up, I marched up to the top of Rook’s Hill and down the steep path to the exit track and back home for my mid-morning coffee.

At 11am I was back out again, marching through Stoford on my exercise route, I added the usual Collared Dove, House Sparrow and Common Starling to the list but I never saw a single Swallow or a Swift.