It was a lovely walk this morning, I saw one or two species that I had not seen for quite a while on my patch and I saw yet another new species for the patch-list.

Fewer and fewer species are singing now, it was quite eerie at first until a Wren burst into song, I also heard a Blackcap sing the first line of his fluty song and a Green Woodpecker called from nearby.

I tracked down the Green Woodpecker and managed to get a couple of pictures and whilst I was searching for it a Treecreeper appeared above me, then a small flock of Blue and Great Tits past by. I was standing on the high bank of the stream on a bend when two Kingfishers appeared, they didn’t zoom past as they usually do, it was more of a fluttering, they were looking for somewhere to perch. I searched for them around the next bend but I couldn’t relocate them. 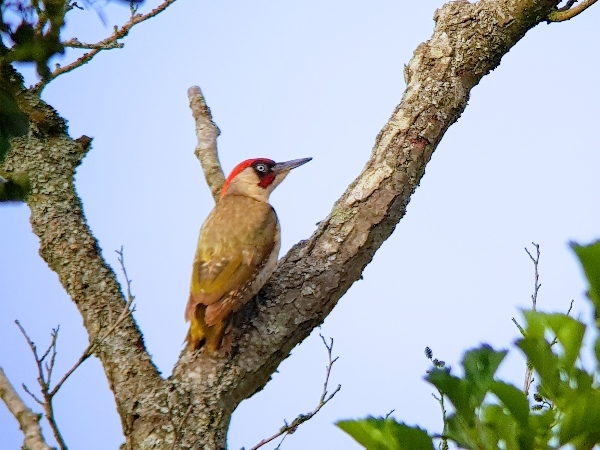 adult male Green Woodpecker, the red colouring of its moustachial-strip identifies this as a male.

As the sky darkened and the breeze picked up I decided to take a short cut by following the hawthorn hedge across the meadow to the bramble slopes at the back of Rook’s Hill. I stood in my usual place where I could watch the dead tree and the fence line on the other side of the river Yeo, they did not disappoint this morning. 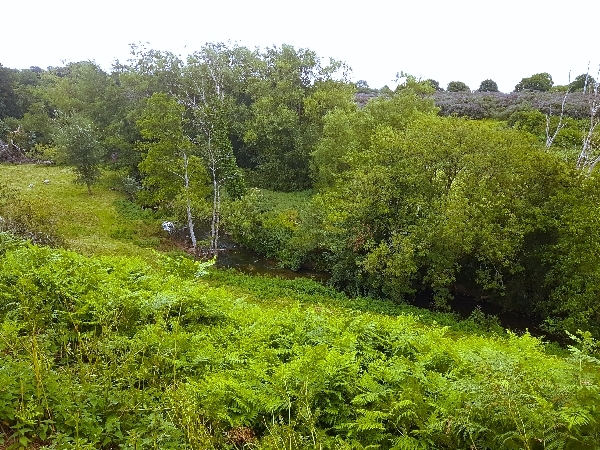 looking down the slope to the river Yeo, you can see that I am at eye-level with the tree canopy

The fence was fairly quiet, I had to wait several minutes before a single bird appeared on it. The pair of Common Whitethroats were still busy feeding young they would land on the fence both before and after visiting the nest in the bramble scrub next to the fence. A Chiffchaff was also busy feeding on insects found on the umbellifer plants growing up against the fence. 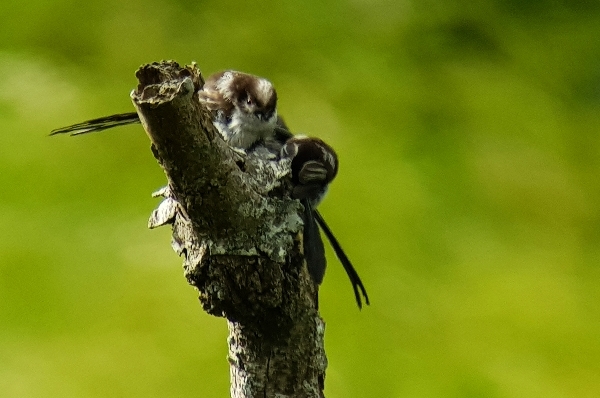 there are three Long-tailed Tits in this picture - just count the tails!

A flock of 8 Goldfinches were in the dead tree as usual, also a Green Woodpecker, I was then distracted by a Great Spotted Woodpecker which was calling away to my left. I walked away from my scope to have a quick look for it and as I walked back I saw that a different bird was perched on the highest point of the dead tree, I took a quick look through my bins and quickly realised that I had a SPOTTED FLYCATCHER on my patch for the very first time!!!!

I got back to my scope just as the flycatcher flew off strongly to the north, I followed it in my bins but it just kept on going, never to be seen again. It was bad luck that it appeared when it did as I was away from my scope. Never mind, you say, and that was the case because plenty of other birds were moving around in the tree-tops offering up photographic opportunities.

A party of Long-tailed Tits seemed to be enjoying the exploration of all the nooks and crannies of the dead tree and I watched Blackcaps, Great Tits, more Chiffchaffs, whilst the fence remained quiet and devoid of birds. 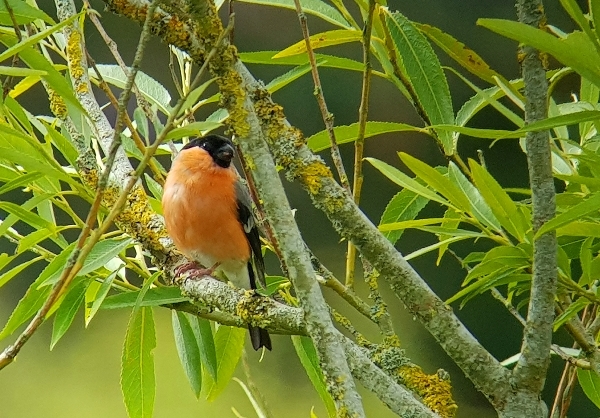 the beautiful male Eurasian Bullfinch - what a cracker

A pair of Bullfinches then alighted in the canopy of one the willow trees, they were at eye-level for me as I stood up on the slope of Rook’s Hill, what a beautiful bird and another species that I had not seen in long time here. A Raven ‘cronked’ as it flew by, a Stock Dove flew over me, quickly changing its direction as soon as it saw me. 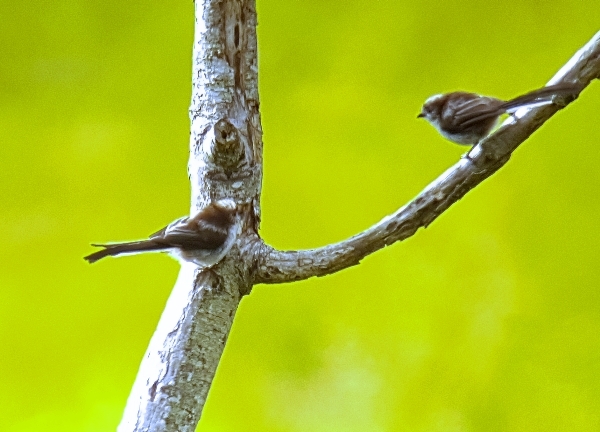 I finished the walk by taking the track up and over Rook’s Hill and as I walked down the steep slope on the other side a pair of Red-legged Partridges flew up, yet another species I had not seen here in quite a while. House Martins, Barn Swallows and Common Swifts were all flying high above me as walked out of the valley to the lane. 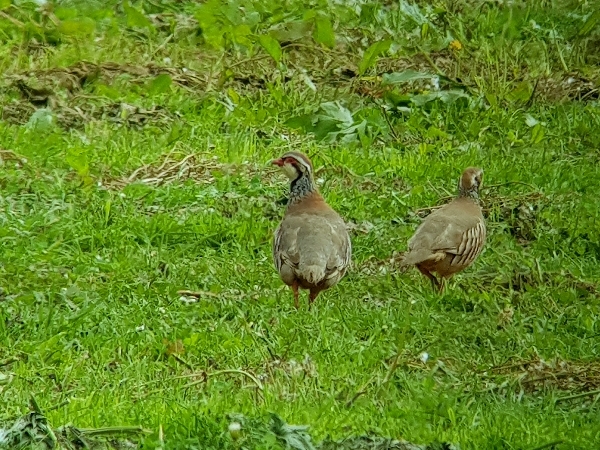 For the afternoon Dawn and I cut the lawn and weeded the borders, I noticed that the farmer had been in and mowed the meadow adjacent to our garden, the sheep were still grazing there and this gives me a much better chance of seeing birds in there now. In fact, a pair of Partridges were in there for most of the afternoon along with Wood Pigeons, Carrion Crows and a few House Sparrows. Later I noticed a large flock of over 20 Goldfinches were flying around the meadow.