For the third day in a row the sky was mostly clear and lovely sunshine streamed down on Stoford. For the past couple of days I have made visits to Sutton Bingham Reservoir after my Yeo Valley walk, which is just 3 miles from home, a very short drive. But today, I decided to do things in reverse and visit the reservoir first. 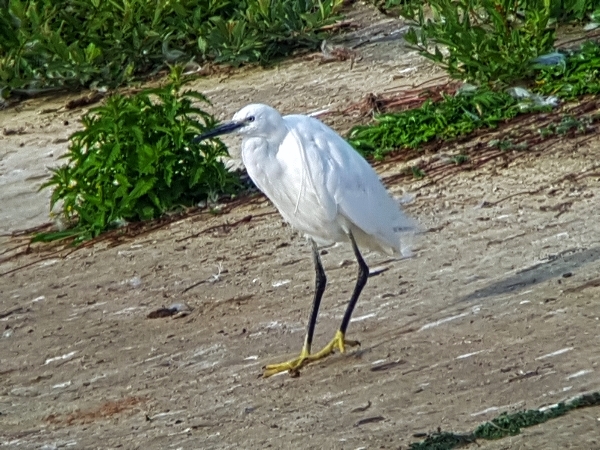 The reservoir never produces vast numbers of birds but it has the potential for turning up something really good. The quality of the water is very poor as far as wildlife is concerned because there are hundreds and hundreds of Carp living there, they eat everything and leave nothing for ducks, swans, waders and wildfowl in general. You never see dragonflies, frogs, newts or aquatic plants. 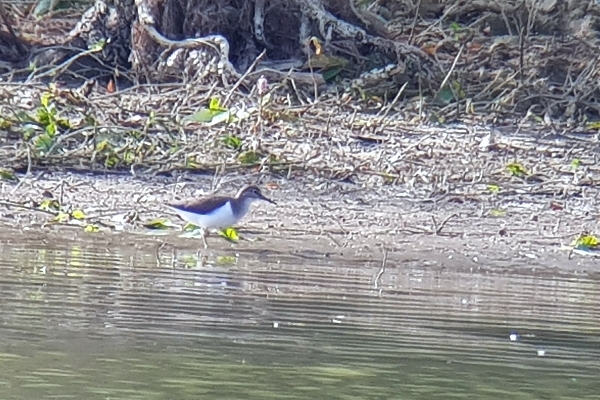 record shot of a Common Sandpiper

Today I stopped at the causeway and scanned the loafing gulls on the concrete sloping banks of the reservoir, I was hoping for a glimpse of the Common Gull that was found a couple of days ago. A Little Egret stood still staring at me before flying off, I also saw a Grey Heron, good numbers of Black-headed and Herring Gulls, also the usual Moorhens and lots of Great Crested Grebes. 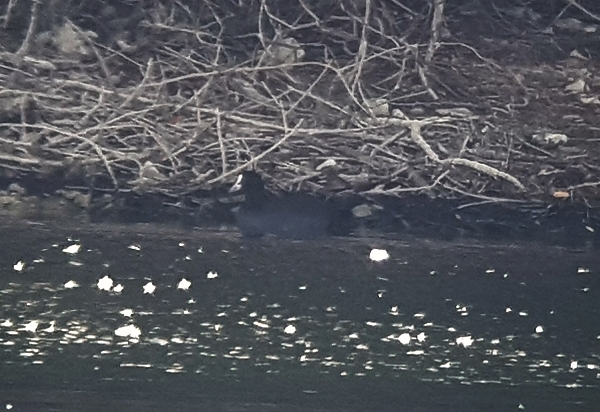 record shot of the Coot - don't laugh it is a local rarity here!!

At the southern end of the reservoir I scanned the exposed mud for waders, I saw a single Green Sandpiper and 5 Common Sandpipers, two Grey Herons and four Little Egrets. There was also 3 Mandarin Ducks, a couple of Great Cormorants, a Kingfisher and a few Mallards. I walked northward along the shore and stopped after 100 meters or so. Two more Common Sandpipers were dashing about on the shoreline but I think they may have come from the mudflats at the southern tip.

A flock of 10 Canada Geese flew in from the fields and as I scanned the far bank across the water I found a Common Coot. This species is very common throughout the UK but in recent times it has become a local rarity here in this part of Somerset. Tim, a local birder who watches this reservoir every day, has not seen one this year!!  So I sent him a message and he came over later and saw the bird, which was his 100th species of the year for this site.

I drove back home at 8:30am and decided to take a quick walk into Yeo Valley, it was extremely quiet so I chose to walk up and over Rook’s Hook instead of walking down through the two meadows following the route of the stream. From the top of the hill I saw a Jay working its way along the tree line below me, too far away to attempt a picture. As I made my way along the top of the ridge I noted Common Buzzard, Great Spotted and Green Woodpeckers, Common Chaffinch, Chiffchaff and Blackcap, they all called but none of them sang.

From my viewpoint I had good views of a small section of the River Yeo and during one scan I noticed a Mandarin Duck feeding in the shallows. Whilst watching the duck two juvenile Moorhens appeared. The significance of the Moorhen sighting was that they were the only the third sighting I have had of Moorhens on my patch and these are the first pictures: 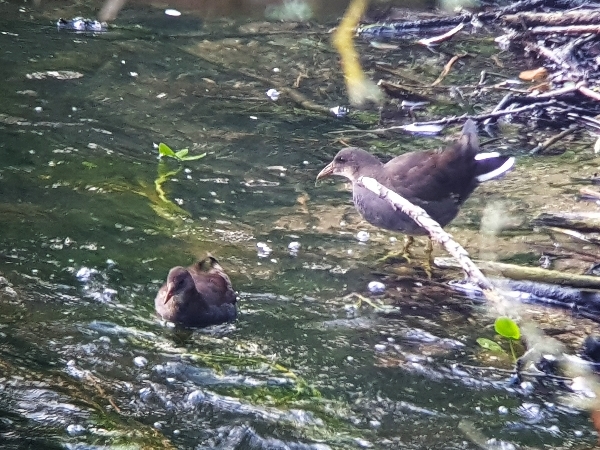 above - juvenile Moorhens and below - the Mandarin Duck as well 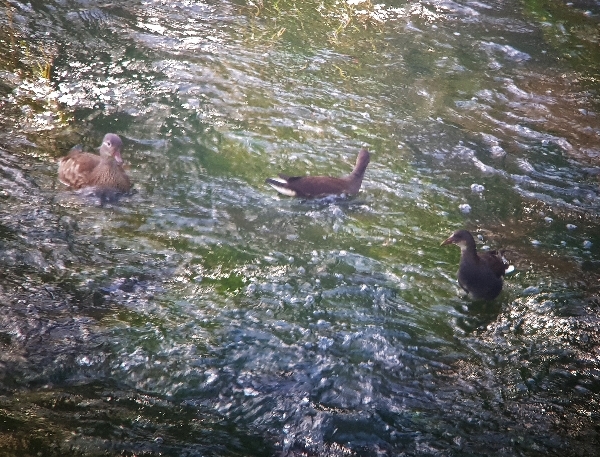 The bird activity on the dead tree and the fence was very slow, I stayed for 30 minutes and saw a couple of Goldfinches and that was it! My route back was along the hawthorn hedge down to the stream where I watched one of the juvenile Common Buzzards calling for momma and I can’t remember another sighting. 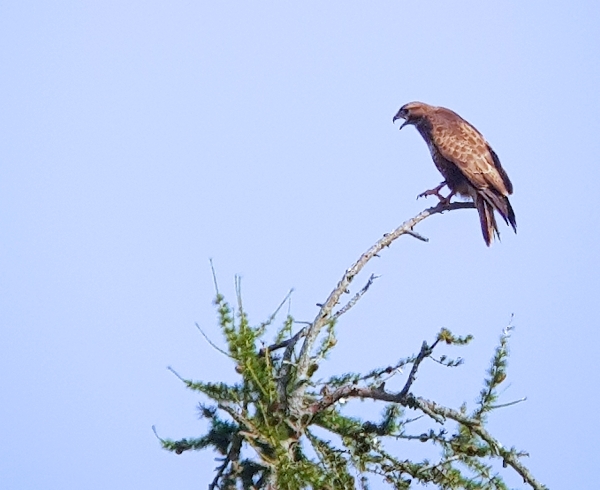 the Common Buzzard fledgling calling for his breakfast

When I got home I sat with a cup of coffee and my phone received a message from Tim, he had gone and found a CATTLE EGRET at the reservoir, now that was not to be missed!! The last recorded Cattle Egret at Sutton Bingham was in 1985 and I missed it. 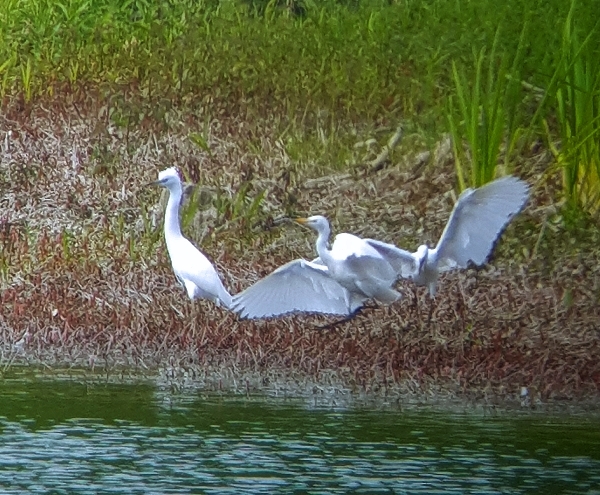 Cattle Egret with a couple of Little Egrets 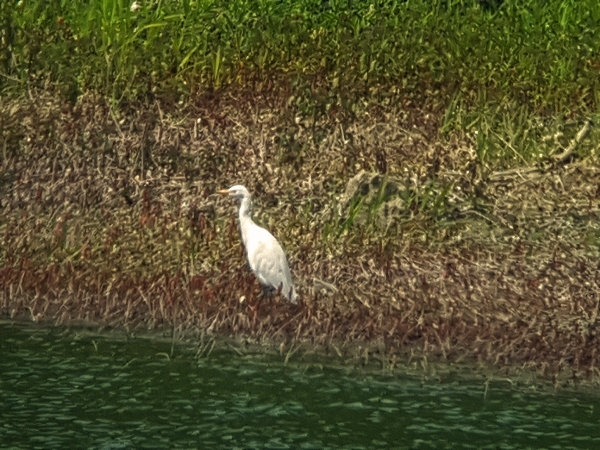 record shot of the Cattle Egret

So off I went and sure enough the bird was still there, a Bingham tick and a Lockdown tick. Several other birders had gathered so it was nice to have a chat and watch the Cattle Egret which was hanging out with three Little Egrets.