WEATHER:  abysmal once again, rain, rain and more rain. Dryer in the evening.

The rain was persistent this morning, heavy at times but mainly light drizzle, however it was very windy which drove the drizzle and made things very wet.

I waited until around 9am before I set off to the Reservoir, my visit was fairly brief I saw the usual birds from the causeway but did not linger. From the southern arm of the reservoir I stood behind a clump of trees and so I was sheltered from the strong wind. Scoping the muddy area I saw 3 Common Sandpipers and I green Sandpiper, also 2 Little Egrets and 3 Grey Herons.

On the shore opposite me a dead fish attracted a few gulls, there was two Great and two Lesser Black-backed Gulls. A few Cormorants sat low down in the trees and a few Black-headed Gulls were blown around over the water. 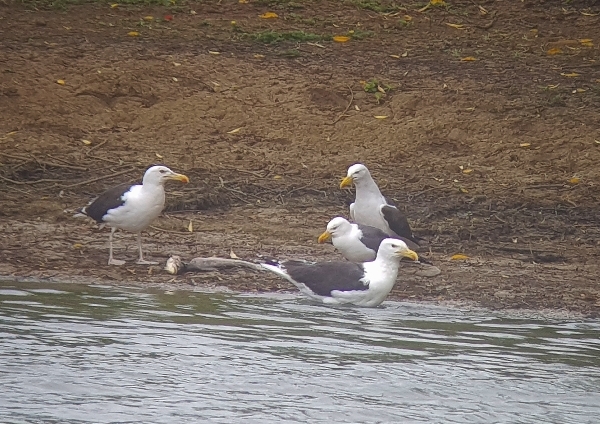 During late afternoon a report came through that a WOOD SANDPIPER was present at the southern end of the Sutton Bingham Reservoir, I was just about to eat dinner so a little while later I made my second visit there. I spent another hour in much better weather, the rain had stopped and the wind had dropped.

Scanning the same muddy area as I did this morning I saw 2 Green Sandpipers and 3 Common Sandpipers but not the WOOD SANDPIPER as I had hoped. A Kingfisher was also present as well as 7 Mandarin Ducks, 3 Grey Heron and a single Little Egret. It looks like I had missed the bird and will have to wait a little longer to get one on my list.