ALL DAY VISIT TO PORTLAND. DORSET

We took one of our epic walks today by circumnavigating Portland, it is 12 miles (20K) in total, we walked for 6 hours and completed 20,454 steps! Phew I was tired at the end of that but it was a most enjoyable day out we took our time and enjoyed every minute.

We parked our car behind the Portland Heights Hotel and set off towards the east side of the island passing through two diused Quarries called Kingbarrow and Waycroft. Both of these are old and overgrown, full of wild flowers and excellent for butterflies and birds. It was 9:30am when we set off so not many butterfies were on the wing but we did find Common Blue and my first Wall Butterfly of the year, a few birds were flitting about too, we saw Linnets, Golffinches, Common Whitethroat and Dunnocks.

At the east cliffs we stopped to admire to view across to Weymouth Bay with parts of Portland harbour in sight too, it was a clear bright day we could see for miles along the Purbeck Coastline. We decided to stay on the upper path which runs along the top of the cliffs and takes you past The Grove Young Offenders Intstitute (Prison). 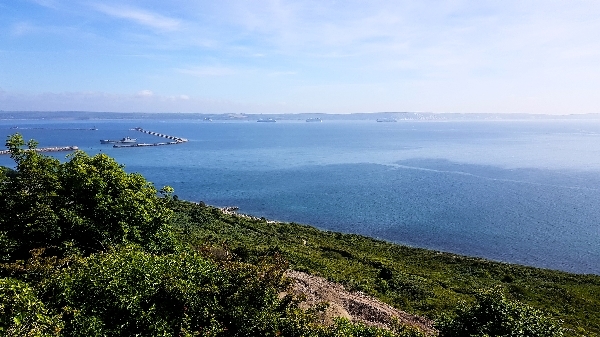 From there we made our way to Chruch Ope Cove, the only natural landing place on Portland and where it is thought the Vikings landed and smugglers used bring in contraband.  The remains of the 15th Century Rufus Castle stand guard above the cove and just below it, in the ruins of the 12th Century St Andrews Church, you can find a 'Pirates' gravestone with a skull and crossbones carved in the headstone. 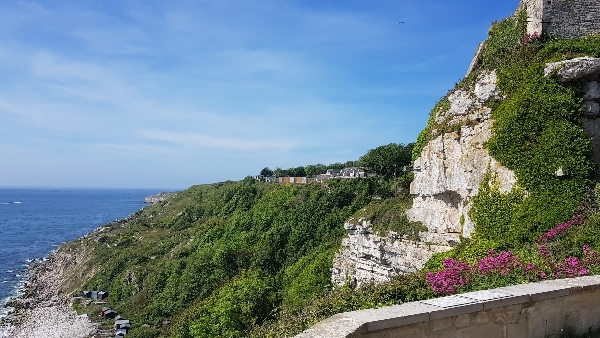 We saw a few more butterflies there and a few Wall Lizards. Wall Lizards are not native to the UK, but are now found all along the Dorset Coast and have establised a sizeable population, how they got there no-one knows. We saw a family party of Ravens just past the cove and a Kestrel hovered high above the cliffs. 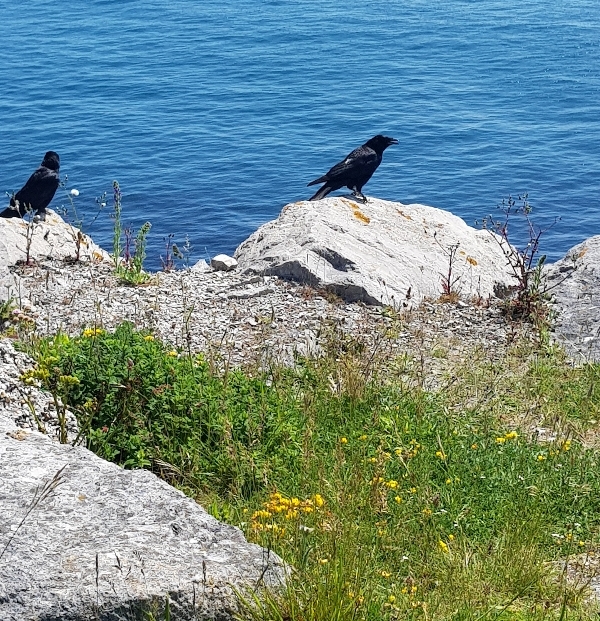 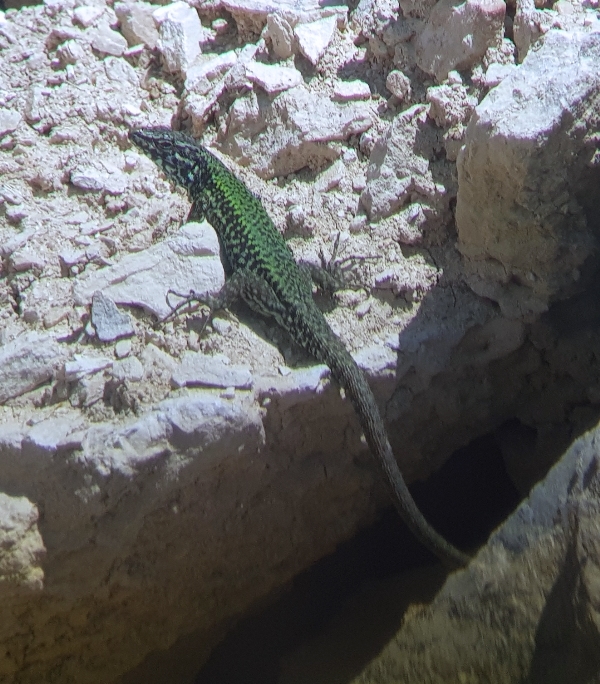 Wall Lizards (male above and female below) 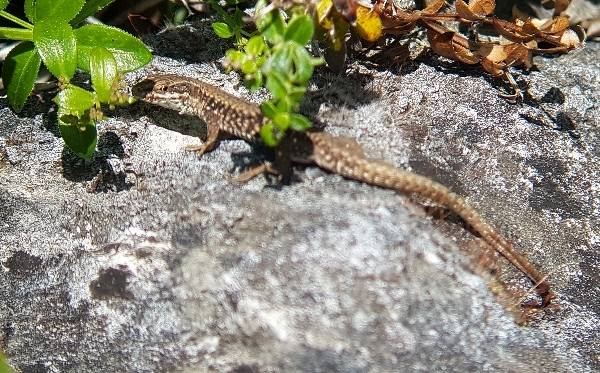 From the Cove you have to walk back up to the road for a short section of the path before you drop back down to the cliffs, all the time you are losing height, Portland Bill, the southern tip of the 'Isle' is now just two miles away and only a feet above sea level.. A gentle slope takes you all way down to the 'Bill', we met an increasing number of walkers and day trippers as we past through the hut fields, it was there that we decide to sit down and eat our picnic lunch, a pair of Rock Pipits we flitting about on the shoreline whilst we ate and we saw Cormorant, Northern Gannet, Fulmar and a few Great Black-backed and Herring Gulls fly past out to sea. 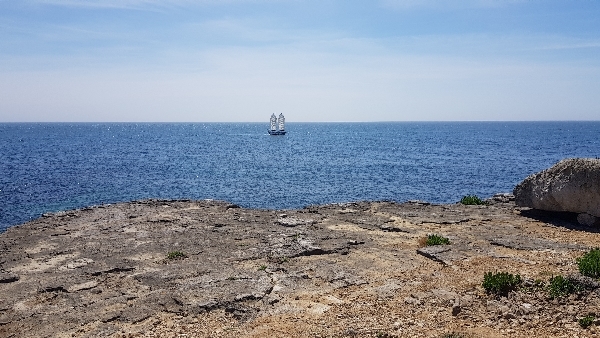 our view from our picnic site

At the Bill we had to have an ice-cream, a delicous '99' with a chocolate flake, mmm!! Then we set off up the hill to connect with the west cliffs, in my opinion this is the most spectacular bit of coastline on Portland. We saw more butterflies lots of Common Blues, also Adonis blue, Small heath, Dingy Skipper and some Five-spot Burnet Moths. I finally caught up with my first Painted Lady of the year, albeit a very faded individual. 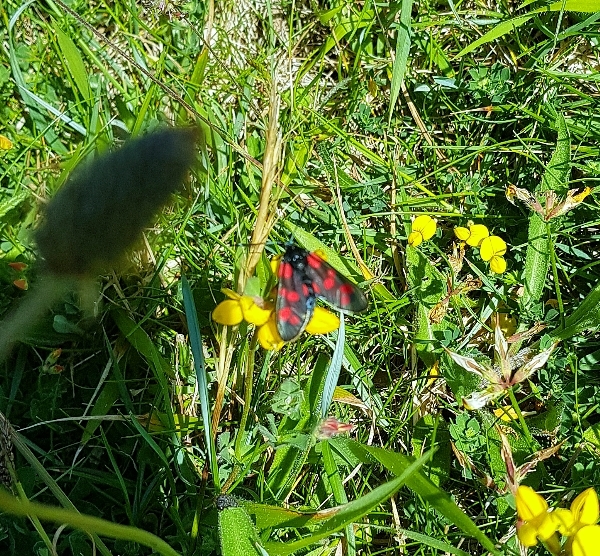 From the West Cliffs we had great views of Fulmars coming to and fro from their cliff-face nests, also Razorbills and Guillemots, Kittiwakes and Shags. 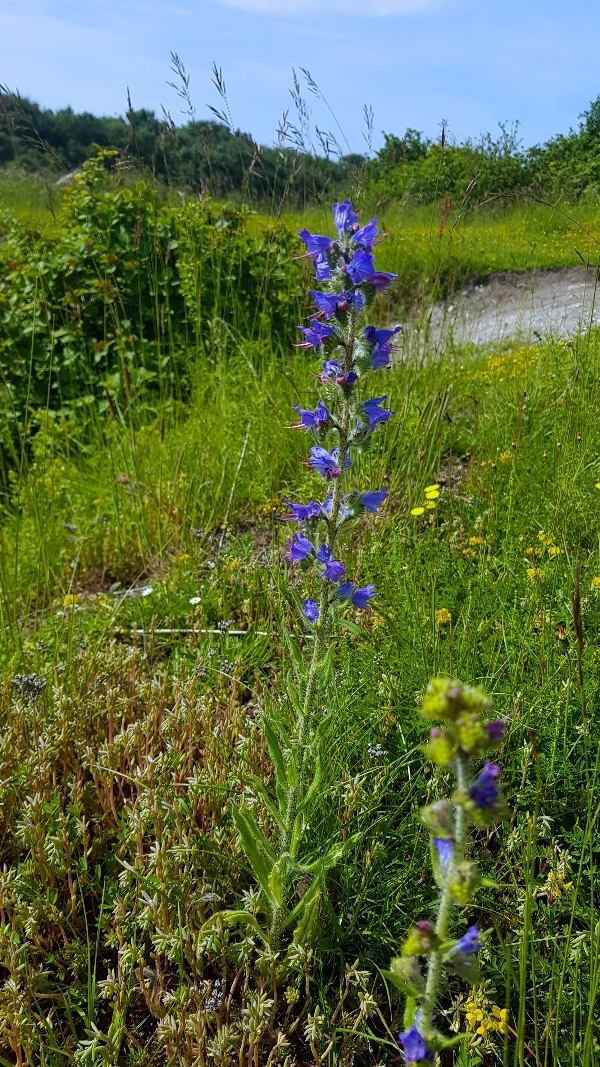 Just past the Upperlight House we came to a large field where a few birders were gathered, I knew that there was a WOODCHAT SHRIKE, in the area and had hoped that we past the site. Sure enough the bird was there showing well but distant, the heat shimmer was awful, I managed a few few digi-scope pictures using another guy's scope but they are not good. 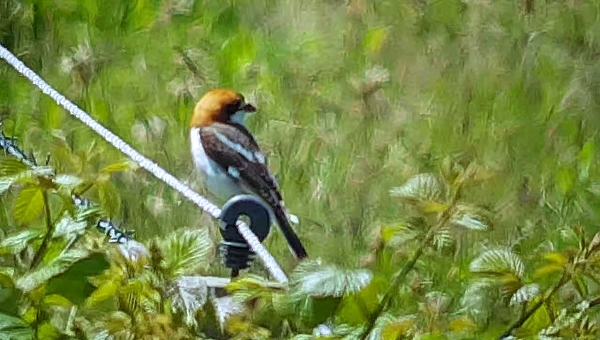 Woodchat Shrike, an uncommon migrant species that is seen annually on Portland 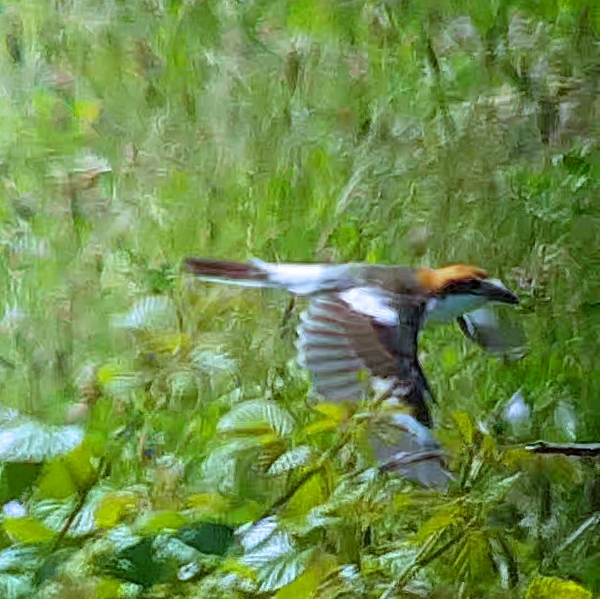 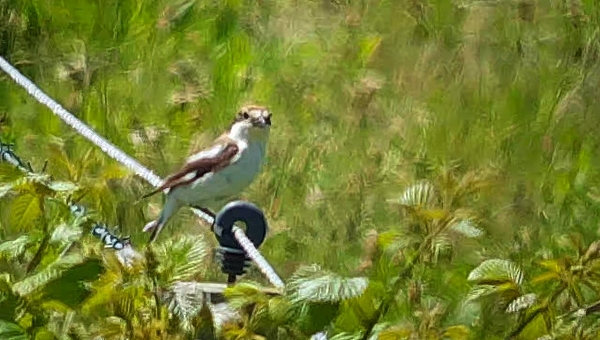 The last 2-3 miles were quite tiring, but still enjoyable, we got back to the car around 3:30pm, six hours after setting out, it had been a great day with lots to see and the weather was terrific. 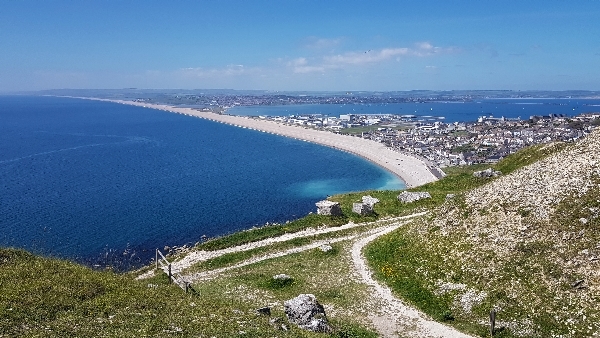 near the end of our walk you get to see this tremendous view of chesil 'Bank', Portland Harbour and Weymouth in the distance