MORNING WALK INTO YEO VALLEY - AFTERNOON IN THE GARDEN

WEATHER; a fabulous start to the day, hazy sunhine, a little misty and no wind.

It was great to be out there this morning I really enjoyed the walk and the company of the great British Wildilfe. A quick scan of the meadow from the garden produced sgihtings of Red-legged Partrdige, Wood Pigeon and a couple of Blackbirds. The Goldcrest was calling from the sycamores as usual and as I crossed the car park to get to the lane I saw Carrion Crow, House Sparrow and the usual Jackdaws.

A Blackcap was "singing in the lane", what a won...der....ful feeling, he's, happy again!! A Grey Wagtail fed in the stream viewed from the road-bridge. As I entered the track into the valley I quickly added quite few new species to the day list with House Martin, Barn Swallow, Magpie, Robin, Wren, Dunnock, Blue Tit and Great tit.

Ravens were calling from down in the valley as I made my way to the Green Woodpecker's nest, I was hoping for some feeding action at the nest, I wasn't disappointed. I settled down into my usual position about 50 meters from the nest hole and focused the scope onto the nest. Within minutes the male bird arrived and promptly fed two of the chicks, it was fascinating to watch. The adult bird had to cough up the food and deliver it into the chicks throat, how nice! 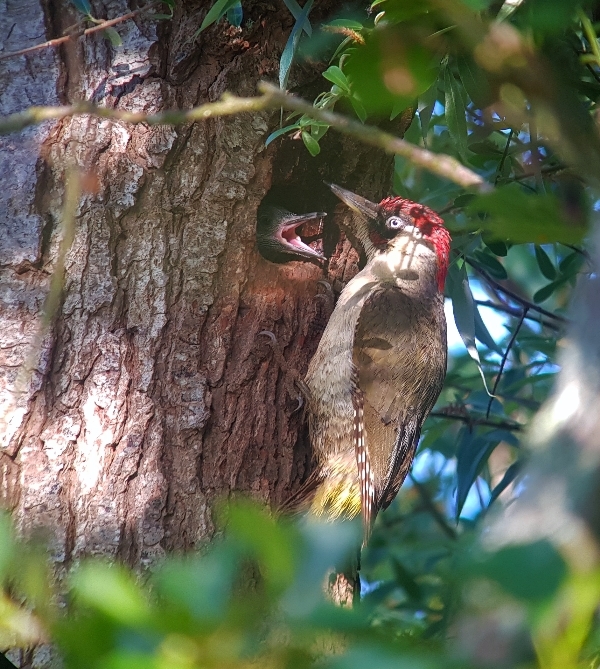 I walked along the stream all the way to the river Yeo without stopping much, I did spend a few minutes at the Kingfisher nest, I saw one of the birds flying away from me and I couldn't be bothered to wait for it to return. I watched the family group of Ravens, they seem to favour the valley since they fledged, I often see them from my garden heading this way. 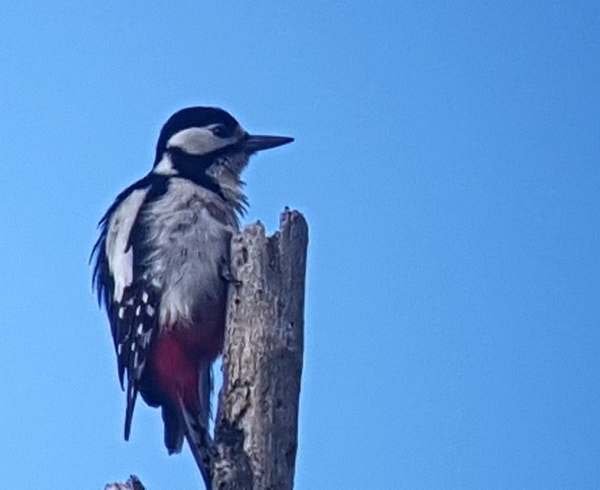 It was in the side valley that I spent most of time, it was just lovely standing there in the nice warm sunshine. I scanned the river for ducks and drew a blank, but the plastic Crocodile was still there, it had moved a little further downstream!! I did see one of the Fox cubs across the river in the field, he was honing his hunting skills by practising his pounces. 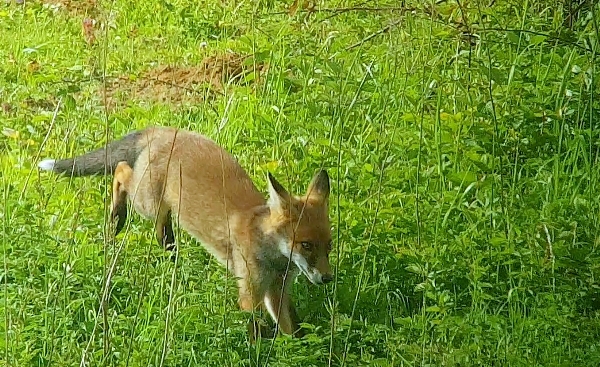 Both Blackap and Chiffchaff were singing and I also saw both species carrying food to feed their chicks, I also saw both Mistle and Song Thrushes, the former is not a common sight in the valley so I was pleased with that.

The Mislte Thrush sat in a very large dead tree and over the next 10 minutes I also saw Great Spotted Woodpecker, Robin, Blackbird  and Goldfinch in the same tree. I could hear Stock Doves calling and a few Herring Gulls flew over just before I left. 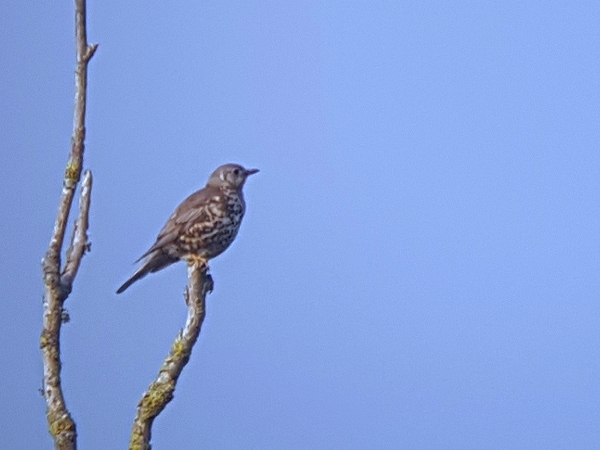 I walked up and over Rook's Hill and from the top I watched a n=bunch of Common Swifts feeding high overhead, I aslo saw Common Buzzard, more Ravens and another Great Spotted woodpecker. 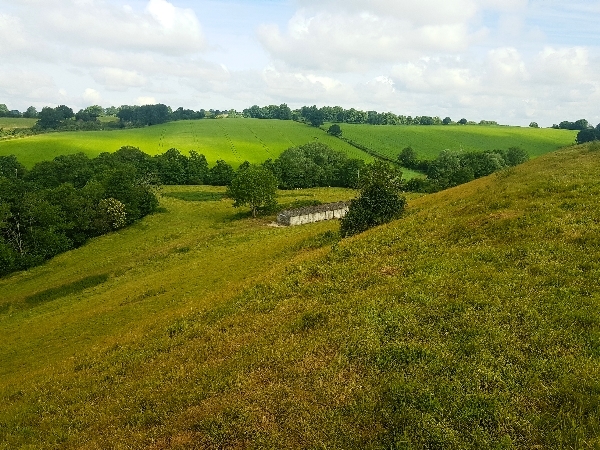 the view from the top of Rook's Hill, you can that the grass is changing colour because of the drought

I returned home, got changed and went for a power walk around the village. I am keeping a close eye on the local Starling flock because ther is currently a large influx of Rose-coloured Starlings into western Europe and I am hoping that one will drop into Stoford very soon.

The whole of the afternoon was spent in the Garden with Dawn, we were planting all the expensive plants that we bought yesterday. Dawn was Capability Brown and I was muggins doing all the planting!!

Last night I put my feeder back on one of the sycamores and the first I saw this afternoon at the feeder was a Coal Tit!! That was the first Coal Tit I had seen for a couple of months. I also saw a family party of Long-tailed Tits, they noisily passed through the trees. A female Chaffinch also visited the feeder, it hovered whilst it pecked at the peanuts, the Goldcrest called for most of the afternoon too.