WEATHER: red sky in the morning.....bt it didn't rain even though it threatened. Quite chilly at the beach.

Yes I went Off Piste today to look for a Rose-coloured Starling! There is currently a mini-invasion of this eastern species into western Europe, there are between 10 and twenty in the UK at the moment and two of them are in Seaton, East Devon.

I woke up at 4:45am and hit the road thirty minutes later! Seaton is 30 miles from my home and it took just 40 minutes to get there. It was before 6am when I walked along the sea-front with scope in hand, I hope to see a few sea-birds before I went looking for the starlings.

It was quite calm out on the sea and I could see a fair distance, many gulls were milling about, I saw Herring, Black-headed and Great Black-backed Gulls, the latter two were new for the June list. Then a small flock of black birds flew into the bay, they looked like a string of black pearls being pulled along, skimming the top of the waves. I knew exactly what they were, Common Scoter, they landed quite far out and I could see a mixture of both sexes in the flock. 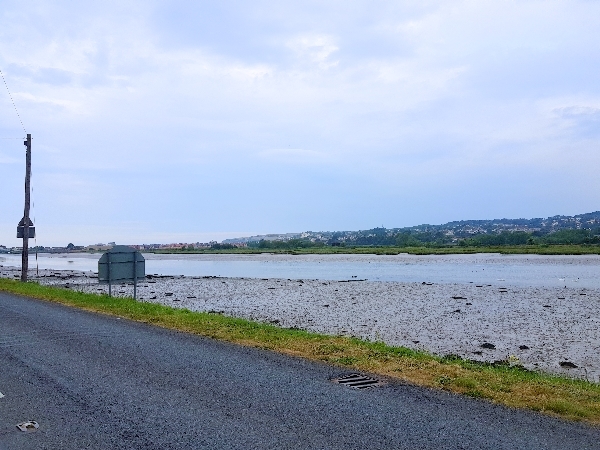 the River Axe with Seaton in the background

A few Cormorants flew past too but not much else was happening. I walked around the town centre for 30 minutes or so without see a single Starling, I thought it was a little too early. So, I headed out of town to Seaton Wetlands, which are a huge area of marshes on either side of the River Axe Estuary. It was alive with birds, many Reed Warblers sang from the reed-beds, all of the trails were open but the hides and toilets were shut. During a long walk I added Common Shelduck, Eurasian Oystercatcher, Reed Warbler, Eurasian Curlew, Moorhen, Coot, Mute Swan, Mallard, Greenfinch, Common Kestrel, Common Swift, Barn Swallow and House Martin to the list as well as all the common garden species. 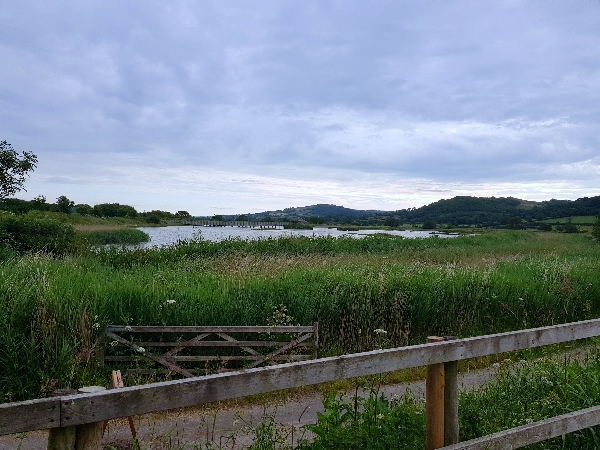 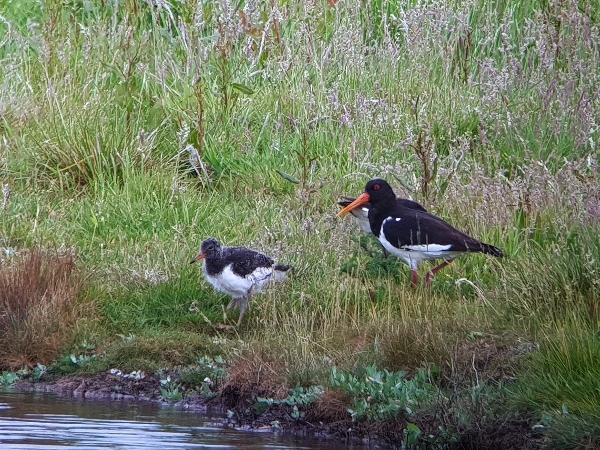 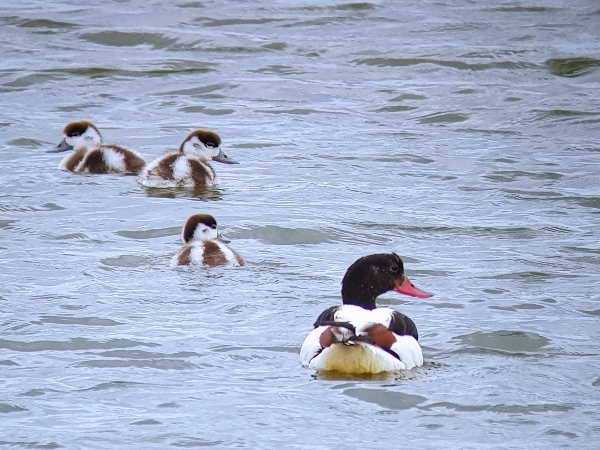 I bumped into 3 guys who were staking out a building across a small meadow, they were waiting for a Barn Owl to appear, I joined them but the owl had other thoughts today! It was nice to know where the nest site was for future trips. 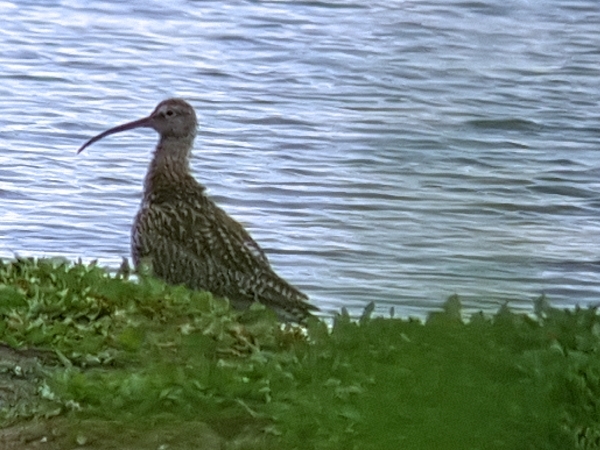 a juvenile Eurasian Curlew, the bill is quite short giving it the appearance of a Whimbrel but it is a young Curlew 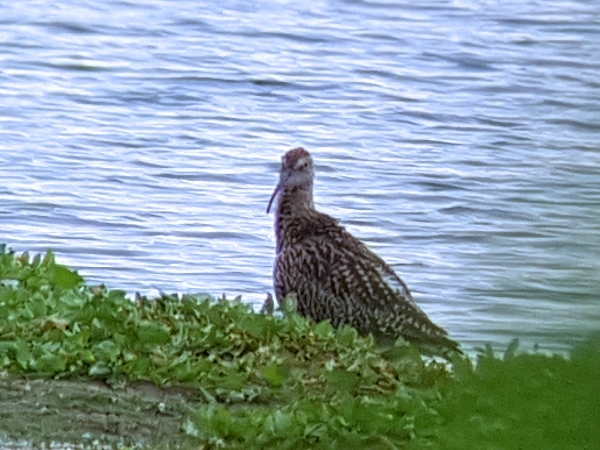 Nigel Blaken sent me a message with details of where the starling were last seen yesterday, so that is where I went to next. It was approaching 8:30am when I arrived in suburban Seaton, the known spot for these birds was along a row of nicely kept houses with well developed gardens on a steep hill. 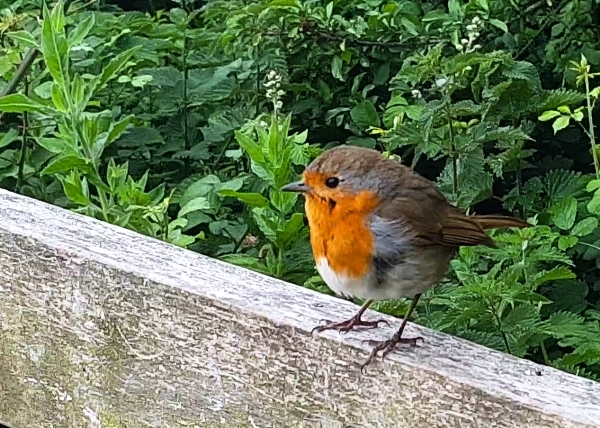 I met two other birders there, they hadn't seen the starling in the last two hours but I was hopeful and this would be the third day that they had been present. Plenty of Herring Gulls were sitting on the rooves of the houses, some had made nest and had chicks with them. 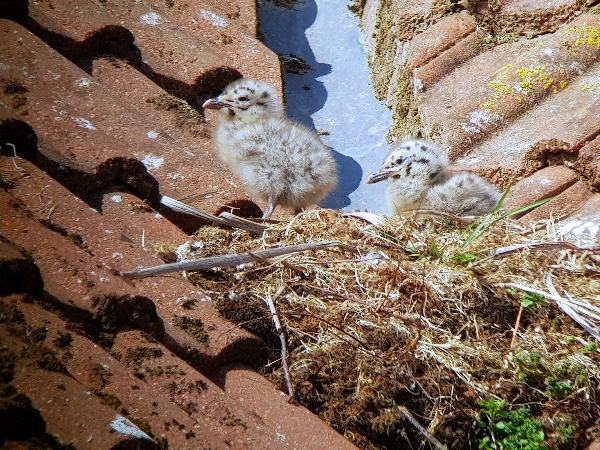 Herring Gull chicks one the roof of of a house 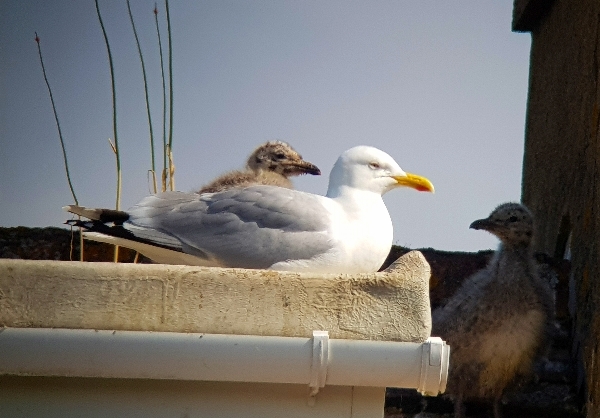 After half an hour one of the guys found one of the Rose-coloured Starlings, fantastic, it showed really well but I never had my scope with me, just great! I had left it in the car at the bottom of the hill, of course by the time I had fetched it the bird had gone.

Another 30 minutes went by and two other birders turned up, they were local women who had seen the birds several times and suggested the next street was a good place to look. In the next street a couple came out of their bungalow and told us they had just had one of the starlings in their garden. They allowed us in the back garden and that is where I saw it for the second time. 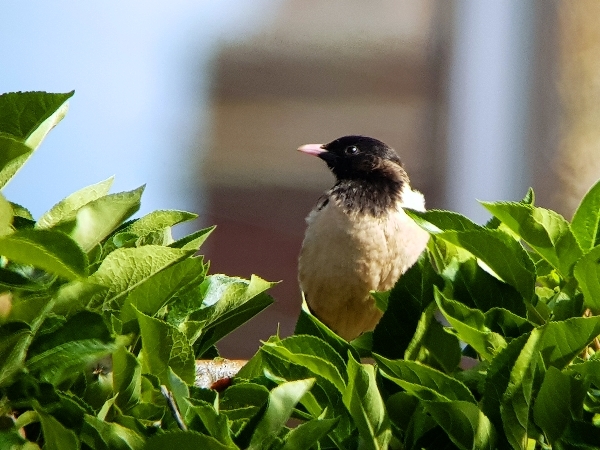 Rose-coloured Starling I'm sorry to say that this bird is the female and not very rosy, the colourful male failed to turn up 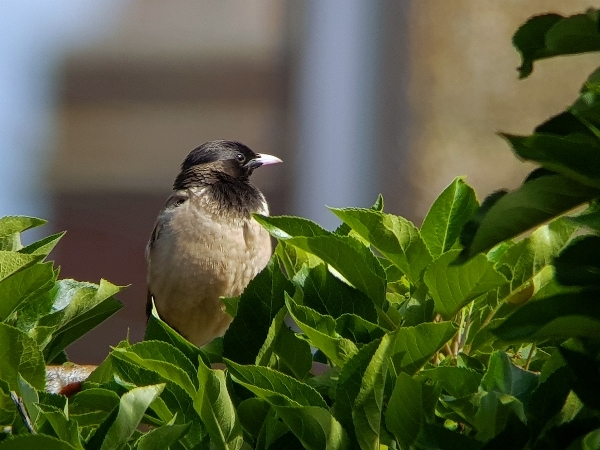 Because of social distancing I stood out on the drive and could see the feeders and the hedgerow in their garden and I found the bird sitting on the hedge, I set up the scope and shazam, the bird shown above, was in the can. No-one called me from the garden so I went down the drive and soon realised that they had NOT seen the bird, so I pointed it out and pretty soon I became everyone's friend.

It ws approching 10am when I left, it took an hour to get back because there was a lot more traffic on the roads. It was disappointing on the way down to Seaton to see three freshly killed Badgers and one squashed Hedgehog on the road, it was a very short reprieve for our wildlife during Lockdown, I wonder how many creatures were spared??