Well June went out just at it came in, dull and overcast with rain, a typical British summer, it's no wonder that I have spent the last 15 summers in Spain!

Nevertheless I still went for a walk into the valley and enjoyed what little wildllife I saw, I spent most of the time sheltering under a tree with the local flock of sheep who are only too happy to share their ticks.

A new electric fence has been put up along the first 200 meters of the stream, I guess the farmer has lost too many lambs in the water or they are wading across to where the grass is always greener. So I couldn't see much of the water until I walked past the derelict building and the first glimpse I had of the water was where a Kingfisher sat preening itself.

my efforts at artistic impressions 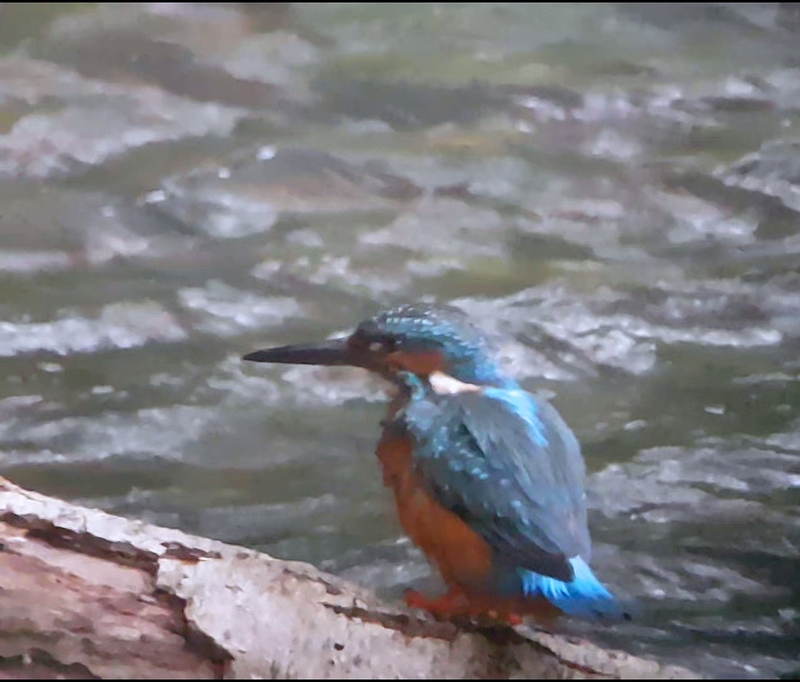 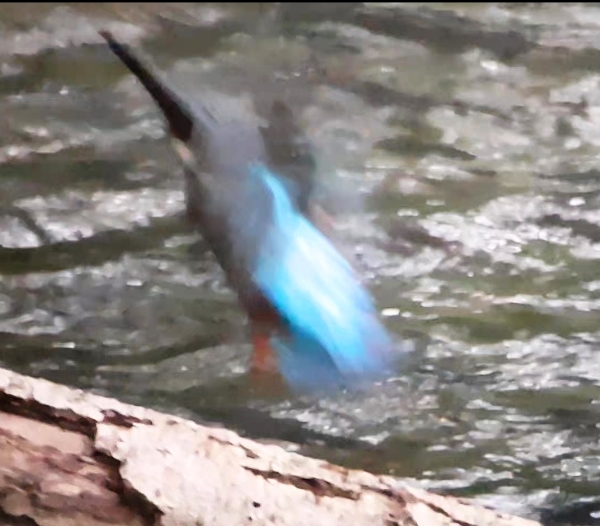 It was a smashing start to the walk, unfortunately it went down hill from there, especially the weather. 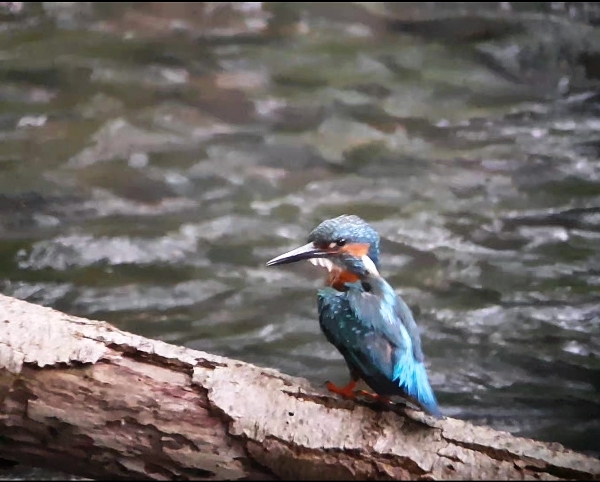 For the last few nights I have been setting up my night camera in the garden and recording a Fox eating the food I had left out on the lawn, today I had the camera with me and I looked for a place to set it up near the stream.  The place that I picked ws very close to the sand bank where the Kingfisher nested, there is a small dry area where I placed the food offerings (cat biscuits) and I strapped the camera to a small tree.

I'll keep you posted as to what I record, if anything. Here is a picture of last night's Fox which again was just a couple of meters from our bedroom window. 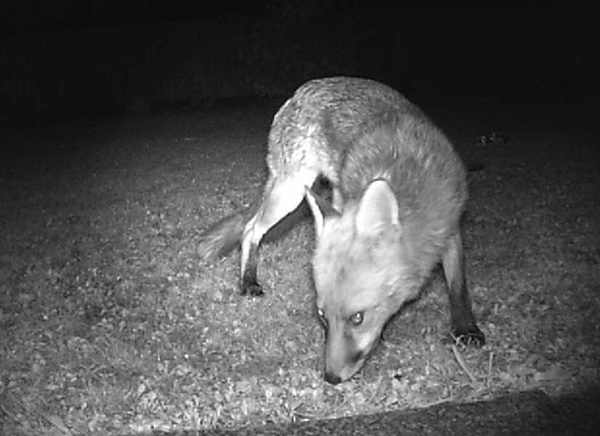 I am amazed at the quality of this night vision camera

During a short break in the rain I walked across the second meadow to the River Yeo missing out a large section of the stream, a Kingfisher flew past me in the opposite direction, it obviously had the same idea about a short cut. During the wallk I heard a few species singing, Blackcap, Chiffchaff, Song Thrush, Blackbird and the ubiquitous Wren.

All the recent bird song sounds a little jaded and subdued, I am not surprised by this because many species have been singing as long as the Lockdown has been in operation and they must be getting a little tired of it. Breeding territories are no longer so important now.

I saw a few family parties of Blue, Great and Long-tailed Tits and quite a few young Blackcaps.

As I rounded a bend in the river I flushed 5 Green Woodpeckers from a large dead tree, Doh!!! I really must pay closer attention to this tree as it often has something in it. I had missed a great opportunity to video a whole family party of Green Woodpeckers. I did see Great Spotted Woodpeckers, Eurasian Treecreeper and Chiffchaff just after.  A small flock of Goldfinches landed in the dead tree and I noticed a Song Thrush sitting on the wire fence on the other side of the river. 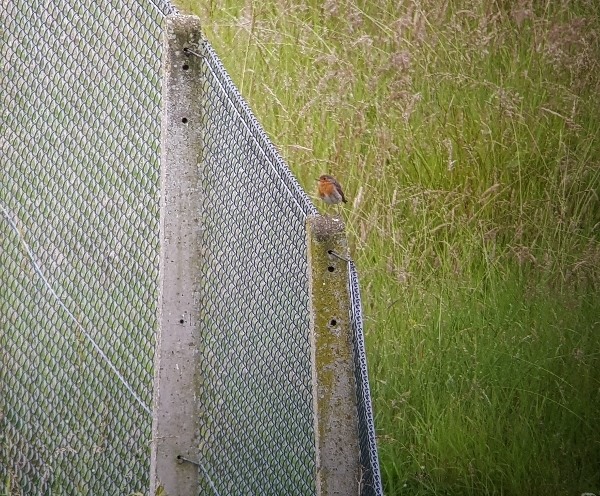 the little tyke guarding his fence 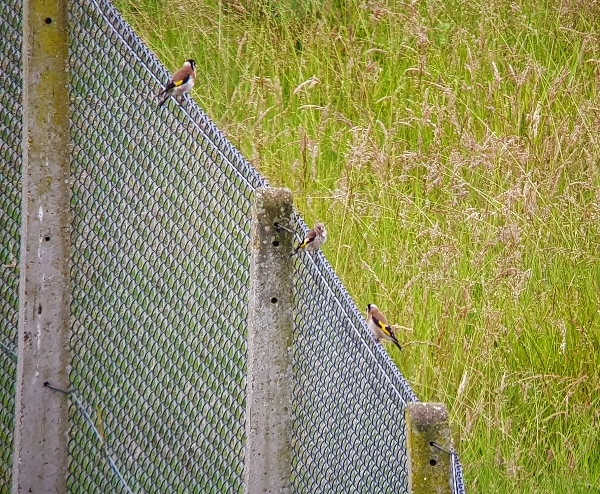 Goldfinches on the fence

This is 'the' fence on which I have been lsiting several different species, to date I have a count of 7 and today I added 3 more!! A family party of Godlfinches joined the Song Thrush which then flew down onto the grass and was replaced by a Robin and a Dunnock, the Robin chased off the Dunnock and then I spotted a Common Whitethroat on the fence, wow!!! That is the first Whitethroat actually recorded on my patch ( I did see a distant one when David Broadley was with me back in April) but this one was fully on my patch!! 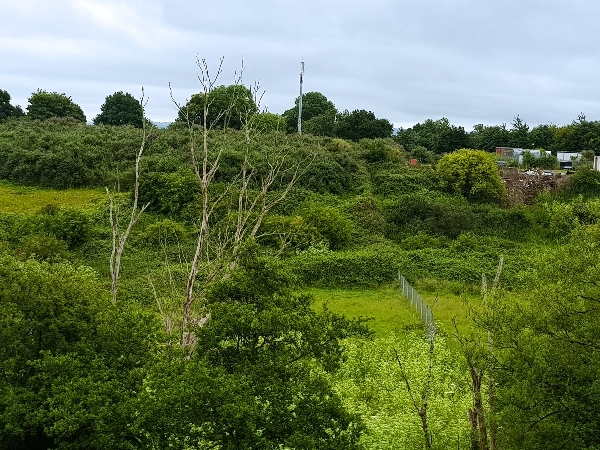 The Robin made sure I never got a picture of the Whitethroat by chasing it away before my phone reached my scope, I do like Robins but sometimes they are a pain in the butt. 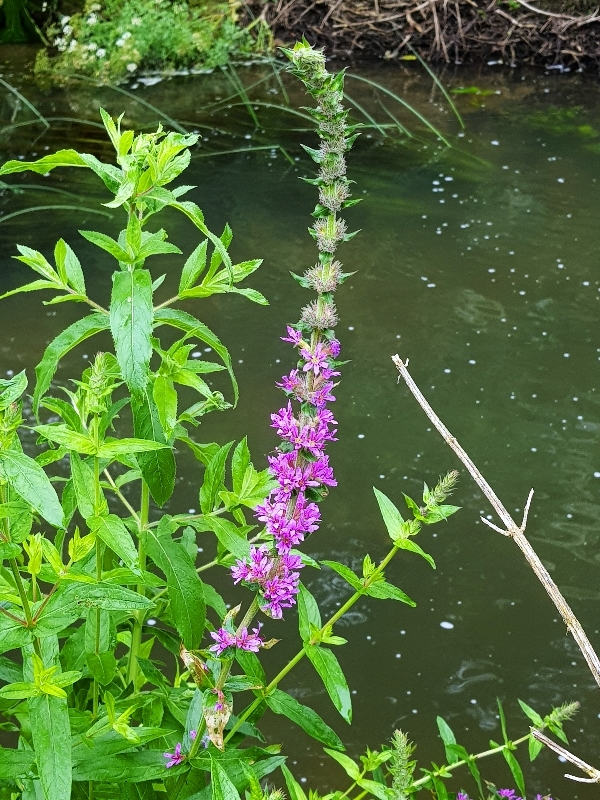 The rain decided to come down again so I made a quick get-away, I found shelter under a large Oak tree with some sheep until it eased off, I bet the sheep were releived when I left, I was ranting about the Robin a little bit. 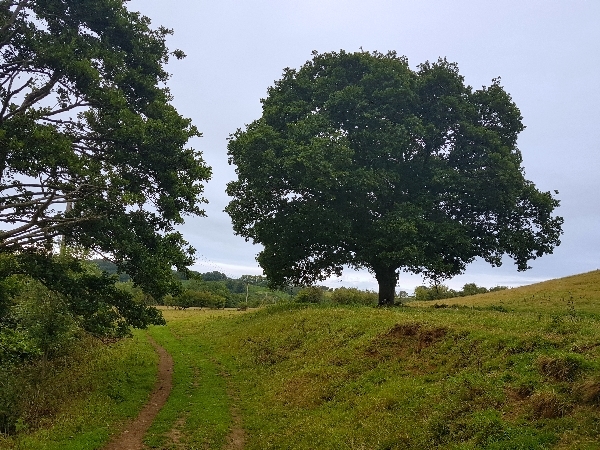 one of my shelters

Back home by 9am, I had been out for three hours and had very little to show for it, but it was better than nothing and much better than not going out at all. Count your blessings.