WEATHER: Cloudy and very windy, felt like 2C out there

The weather put me off from taking a morning walk it really was blowing gale out there (whimp you might say!!) and it was dull and overcast. However, it cleared up in the afternoon and the wind dropped off a little so I braved the cold.

I never expected to see much and bird song was minimal, I had walked nearly a mile before I heard my first Wren! Finding shelter from the wind was difficult out in the meadows but I followed the stream very closely and found a little shelter behind the Alder trees.  A Treecreeper showed well and I managed to get a quick shot off before it disappeared. 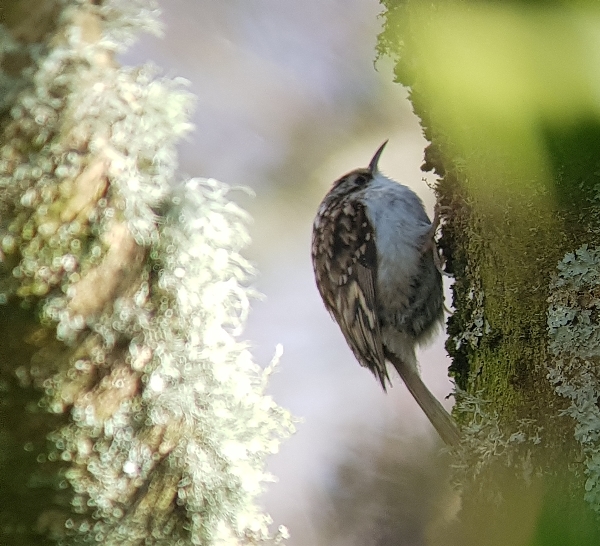 I really never expected to find a new species for my isolation list but finding three was incredible!! The most unexpected species I found was in fact a FIELDFARE, (new tick No, 1) it flew from a low bush up into a tree and as I raised my bins I thought it was going to be a Mistle Thrush. But no, it was a Fieldfare, I fumbled about trying to get my scope off my back and set it up to take a photo and of course the bird flew off. I followed it in my bins and then headed off to where it landed some 200 meters away across the meadow, I never relocated it. 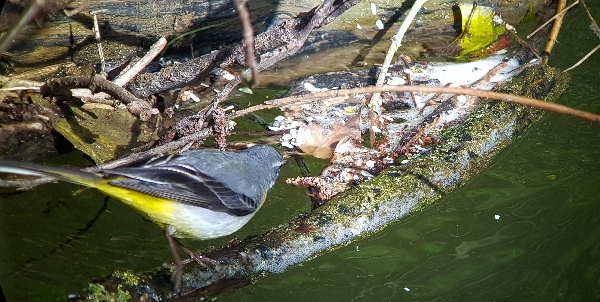 So I found myself on the bank of the River Yeo and as I neared the edge of the river a Grey Heron flew up and although this is not a new bird for the list it certainly was a new bird for the river (my previous sighting was a flyover seen from the garden). Anyway, as I was recovering from that excitement a Grey Wagtail flew towards me and landed on a log lying in the water. Again I fumbled about and missed an excellent opportunity to take a lovely picture in good light.

Just as I put my scope back on my back a Great Cormorant flew up from the river ahead of me, wow! Tick No. 2 for the isolation list. I couldn’t believe it. During the next 20 minutes I watched both Great Spotted and Green Woodpecker, the latter flew from a broken tree trunk, I had seen it there before and I suspect there may be a nest hole in it somewhere. I looked carefully and found an old nest hole, so if there is a new one it must on the other side which can only be viewed from across the river.

I waited around for a Kingfisher to show but it never happened, I was desperate for a picture of something. I found a grassy bank which was sheltered from the wind and where lots of Deadnettle was growing, a Bumble Bee was visiting the White Deadnettle, so I photographed that. 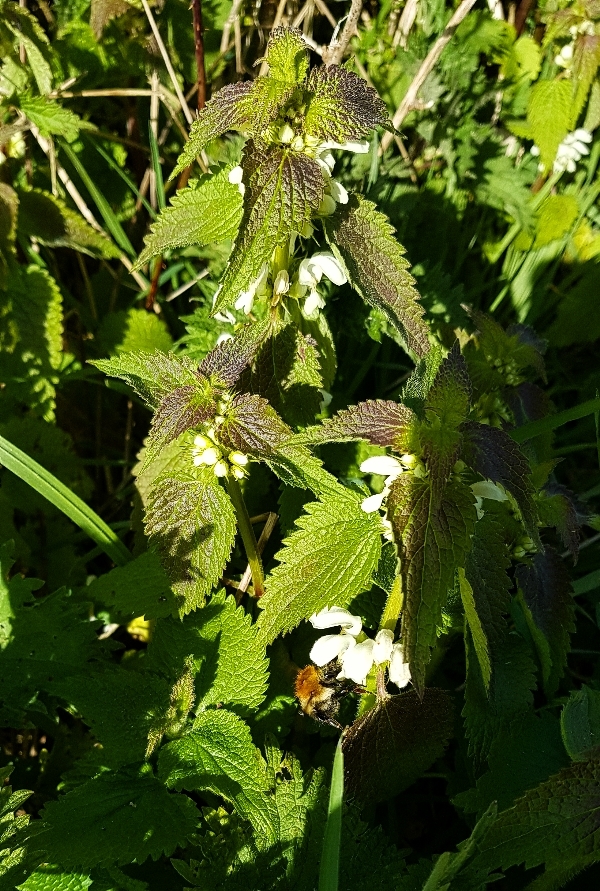 White Deadnettle – Lamium album …….is also called Bee Nettle as it is attractive to Bees as an early source of nectar and pollen. The nectar is available only to them because of their weight, lying deep inside the narrow corolla that lighter insects cannot reach it. 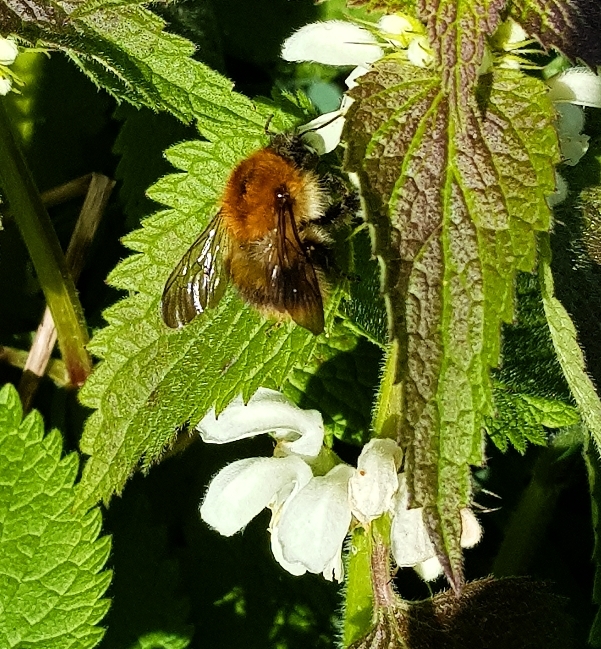 My third and final new species for the list was a Collared Dove, they are not common in my village especially at this north end, so I hadn’t seen one until today. Hopefully I will get out in the morning as the wind is supposed to drop by then.