It really was quite cold when facing the northerly wind but where you could find shelter you felt a little warmth from the sun. I headed to the Nuthatch nest and just after I walked onto the track I glanced at the stream and to my great surprise there was a pair Mandarin standing on a log!! I have never seen them this far up the stream before, they didn't fly off, they jumped into the water and drifted down the stream away from me, I quickly got off a few pics including one from my phone without the scope.  Could this be a second pair of Mandarins?

The Nuthatch nest-hole entrance seemed complete to me so I took this picture and was about to walk off when the female flew in. 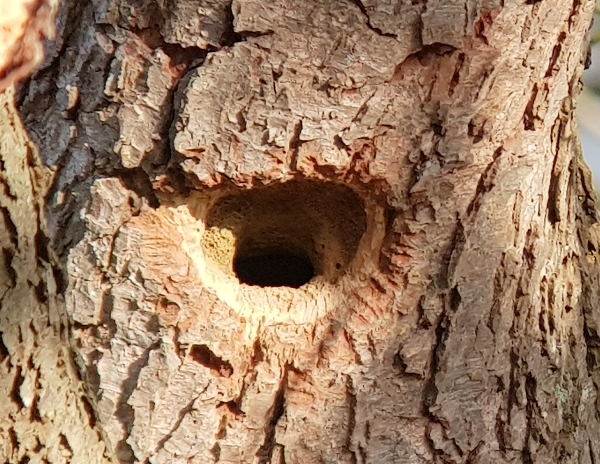 Obviously not satisfied with the work they had already done, she started to add more mud, you can see from the photograph that she had mud on her tail and wings and a little on her back. The male in the meantime sat at the top of the next tree calling looking clean and pristine! 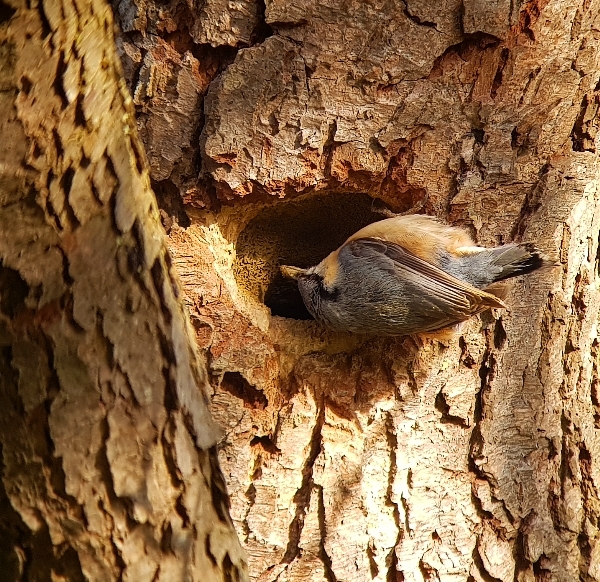 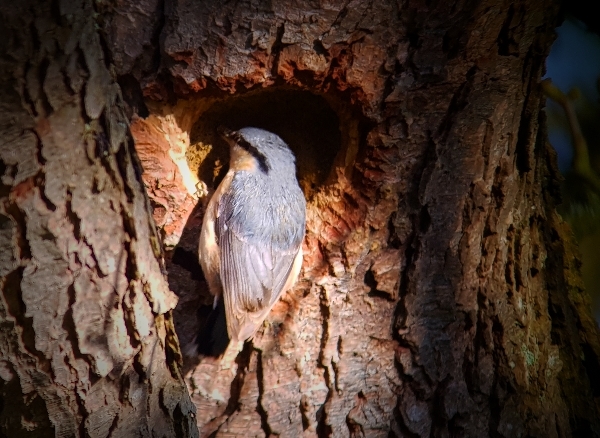 My next sighting was of a Grey Heron, it was standing the ploughed field looking for scraps and not being very successful. 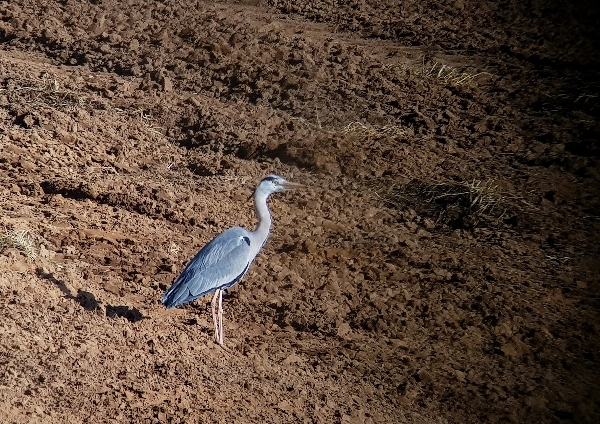 I approached the 'usual' Mandarin Duck site with caution, and yes, they were there, so that confirms that there are two pairs on the stream, I hope they manage to breed. This Mandarin site is now also my new 'Kingfisher site' because just after the Mandarin Duck sightings I saw a Kingfisher, it flew towards me and veered off when it noticed me. It may be a coincidence but this is exactly where I saw one yesterday and there is a typical kingfisher nest-site in the shape of a lovely vertical mud bank with an existing hole that can be seen. The site is on my side of the stream so observations of comings and goings will be difficult, but watch this space! 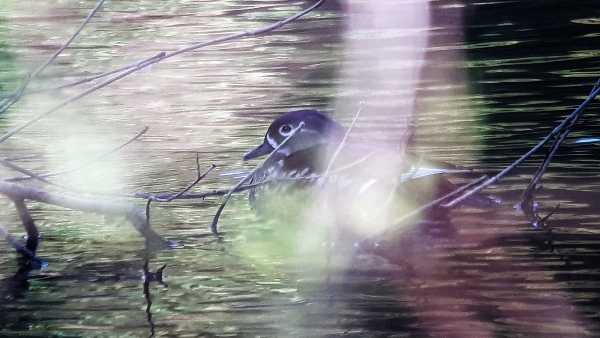 my first picture of the female Mandarin Duck 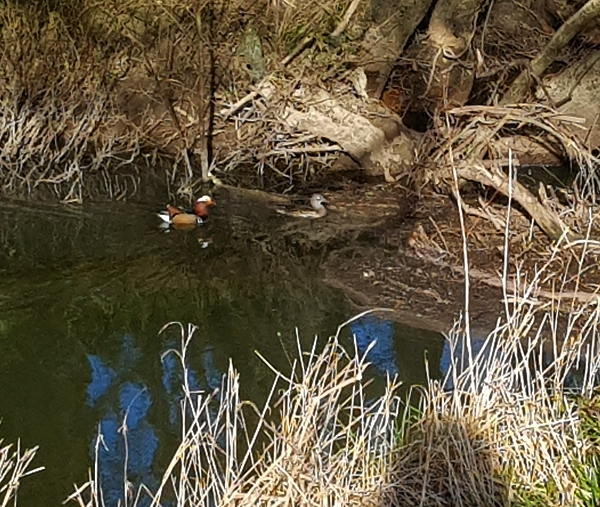 A Mistle Thrush flew from an ivy clad tree a little further down the stream and the usual Chiffchaffs, Blackcaps, Wrens, Robins, Green Woodpecker, Red-legged Partridge and Pheasants all called. Three Great Spotted Woodpeckers were drumming too.

As I walked along the River Yeo there was a distinct lack of birds, no Grey Wagtails and the only other species I recorded was Song Thrush, it was eating Ivy Berries. This is now the fifth species I have seen eating these berries after: Wood Pigeon, Blackbird, Robin & Mistle Thrush.

From the top of the hill I had great views of the two recently ploughed and newly harrowed fields, where yesterday there was over 80 gulls and lots of corvids feeding (must spell that word correctly in the current climate!).

From my superb vantage point I could see several Herring Gulls, a single Lesser Black-backed Gull and lots of Rooks and Jackdaws, the Heron was also still in sight at the bottom of the field.

As I 'scoped the top of the field I noticed a Buzzard sitting on the newly harrowed soil, then a second one and a third, then a fourth! A fifth bird sat in a tree, what was going on? 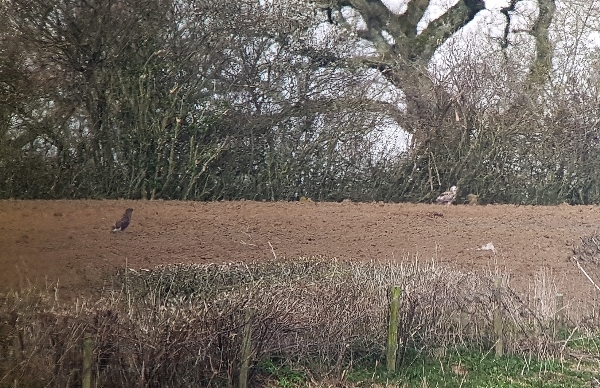 two of the Buzzards sitting on the soil at the top of the fields - you can see how far away the fields are from the photos above.

I didn't recognise any of the buzzards they certain wern't my local guys. I decided to walk 20 meters to get a better view and as I did so a 'flock' of Buzzards took to the air, (it was impossible that it was me that flushed them as they were at least 1/2 mile away). Anyway, 9 Buzzards took to the air and 3 remained on the soil. They circled on the thermals to a great height and disappeared North, migrating?? 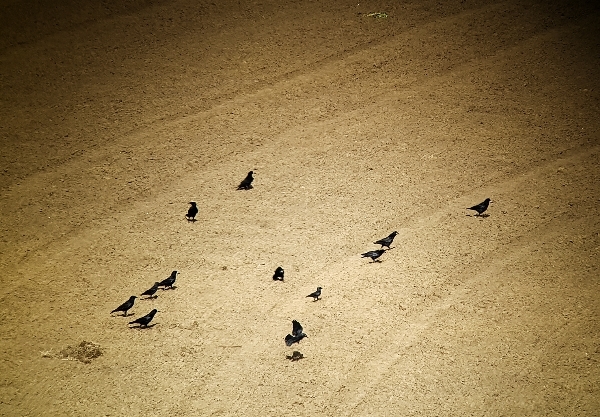 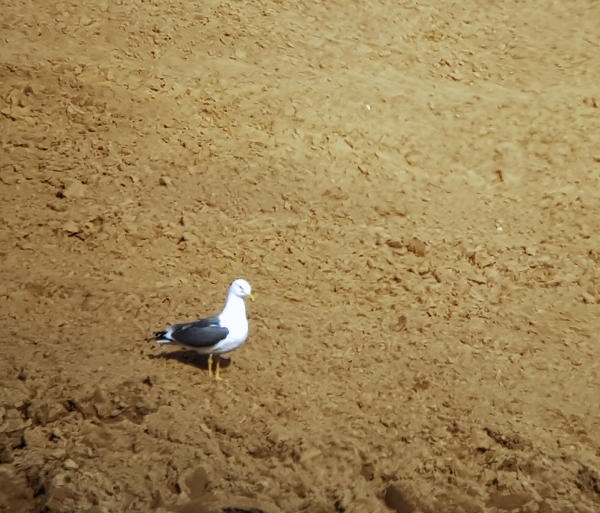 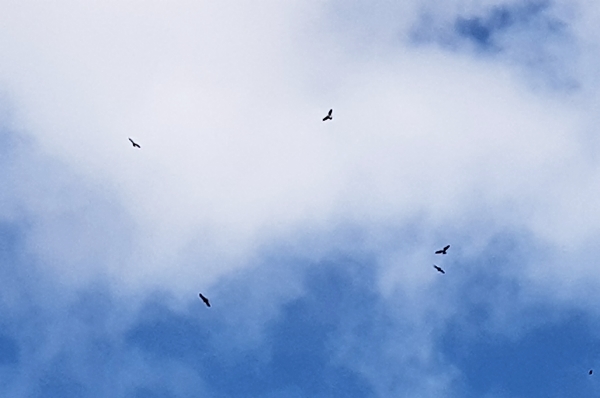 That was exciting. More excitement greeted me as I got back home and watched my feeder and nest box for a while. I never mentioned that after receiving a week's attention from a pair of Blue Tits my nest box sat lonely and forlorn, then a pair of Great Tits started showing interest. The hole was too small for them, so, I went out there with my drill and made it bigger.

Today the pair went inside the nest box and the female remained for quite a while, I think she likes it, more news will be forthcoming.