This morning was the stuff of dreams, idyllic, perfect conditions for birding as if heaven sent!! What a joy to be alive and walking in the British countryside on a day like today,  the bird song was magical, I couldn't drag myself away.

That slight touch of frost, the stillness of the air and the bright, cloudless sky was for me the best day of the spring so far. I lost count of the number of Robins, Wrens, Great Tits and Chaffinches that were singing as I made my way to the valley (which is 200 meters from my front door).

A touch of frost on the grass

You might think that I am getting obsessed with Mandarin Ducks and Nuthatches, I'm not! I just find both species the most fascinating at the moment. I am curious about the possibilty of breeding by the two pairs of Mandarins and I am hopeful that the Nuthatches complete their nest without further 'woodpecker' interruption.

I by-passed the Nuthatch nest, well, I did have a quick look at it through the scope and all seemed finished and in good order. I did very well with the Mandarins, I was able to sneak up to them and watch them for quite a while but I was distracted by movement in a clump of ivy. 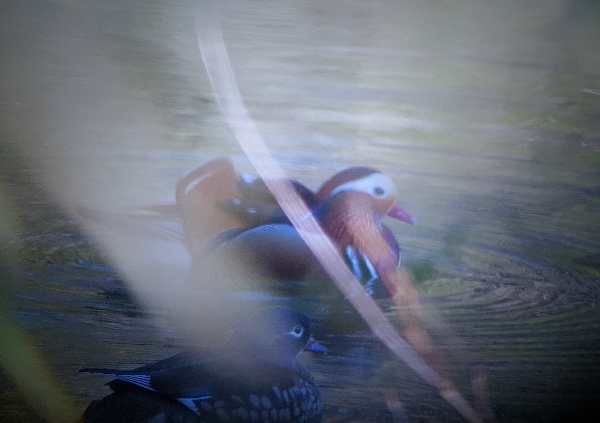 through the bushes I could watch the Mandarins, not good for photographs though

A pair of Mistle Thrushes were eating the ivy berries and I missed an opportunity to photograph them because of the Ducks. Nevertheless, whilst I was waiting for the thrushes to reappear I could hear a raven 'kronking' in my left ear and a Red-legged Partridge calling tickety-boo, ticket-boo, ticket-boo in my right ear. The Green Woodpeckers were also very voiciferous today. I think all wildlife was happy with this morning's weather, it certainly seemed a lot louder than yesterday.

Within about 10 minutes I added two new species to the isolation-list, first, three Stock Doves flew over and then a pair of Mute Swans did the same, what a noise their wings make, they sounded like an wheezing asthmatic who had just run a mile. I never expected to get a Swan on my list! 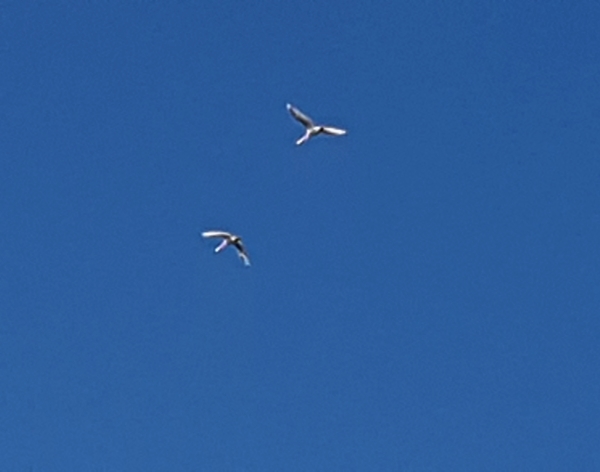 I reached the far end of the valley with hardly a picture in the can, but as I walked along the sun-strewn banks of the River Yeo things picked up. Both Chiffchaff and Blackcap were in full song, the melodic, flutey notes of the Blackcap were a stark contrast to monotonous, disyllabic notes of the Chiffchaff. So, I plumbed for the Blackcap who would also win a beauty contest over the Chiffchaff! However, the bird was a little shy and would not show as I wanted....... 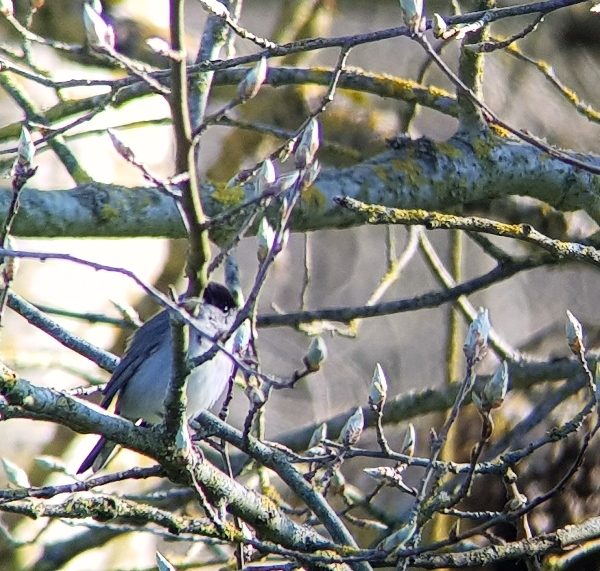 The Blackcap was a little camera shy 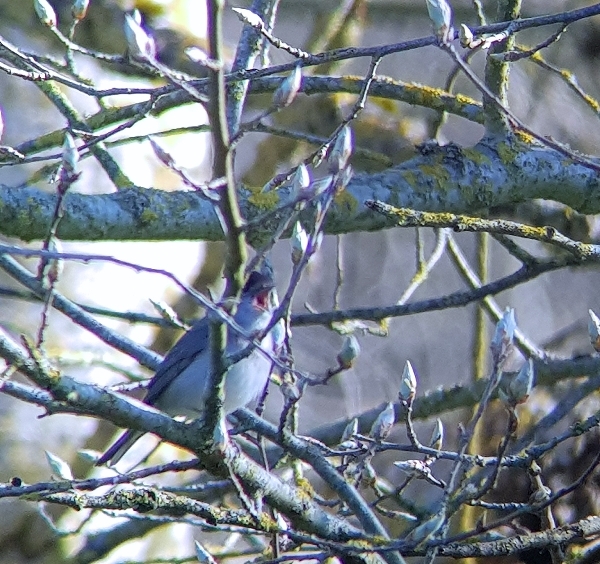 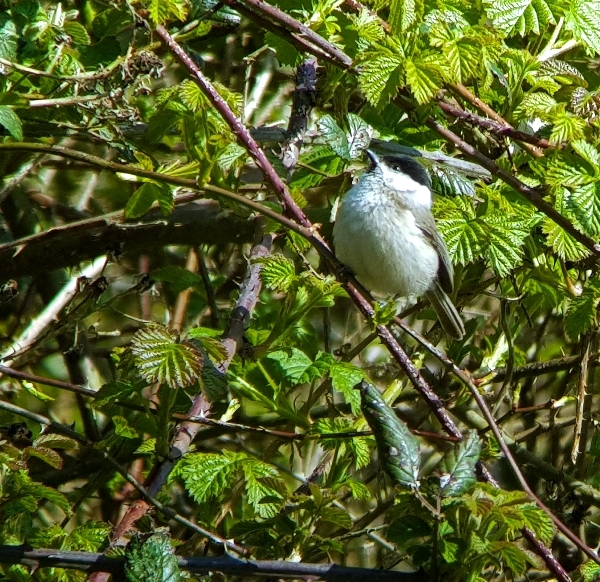 another bird with a black cap - the Marsh Tit 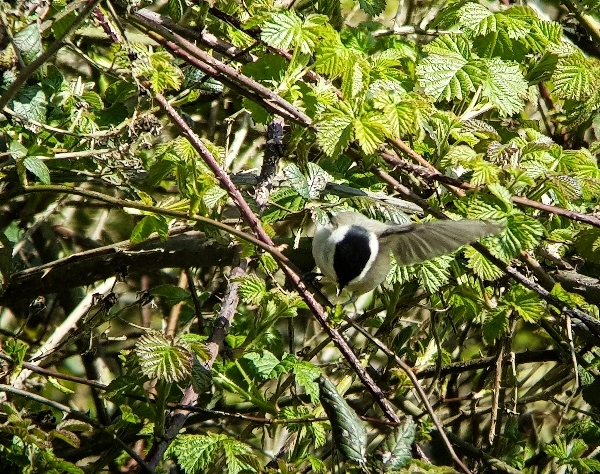 you can tell a Marsh tit from a Willow Tit by its shiney head feathers, I don't know why the bird is also showing you its wing??

I spent a good deal of time looking for the Kingfisher without luck, but the hole I mentioned yesterday looks as though it had been worked on because a little pile of fresh soil lay beneath the hole on the river bank.  Hmmmm very interesting!!

Before I climbed the hill to go home I looked for Grass Snakes on the east facing grassy bank, it was around 10am and they usually sit out in the sun warming themselves up, but none was found.

From the top of the hill I could see that a few Gulls remained in the ploughed fields with Rooks, Jackdaws and Crows. 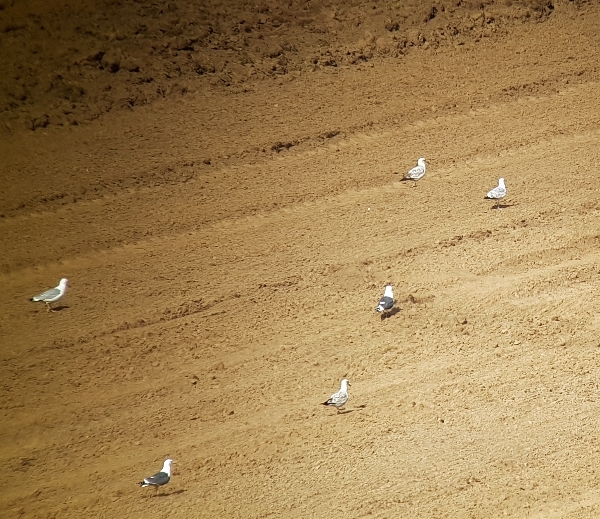 Herring Gulls with a couple of Lesser Black-backed Gulls

I could also see across to Barwick House and Parkland where the famous Four Follies stand. I could see three of the follies from my position. 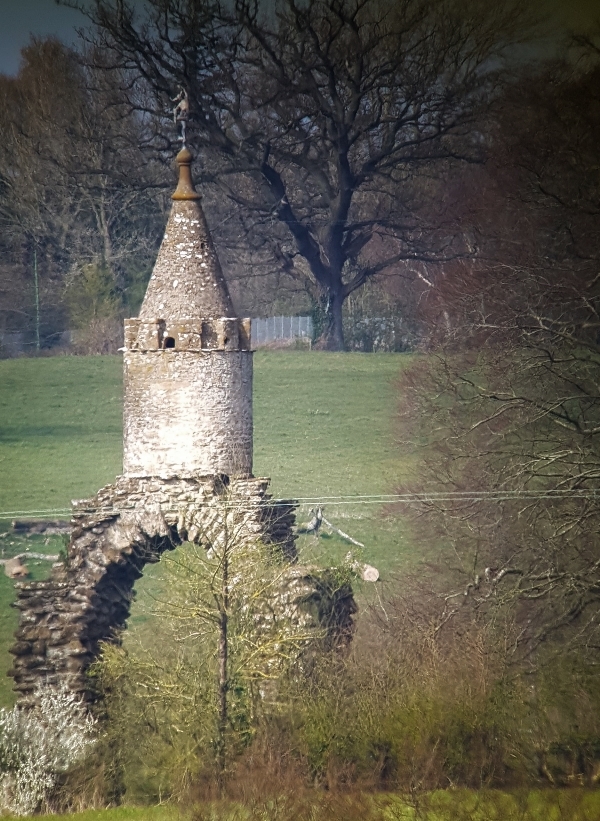 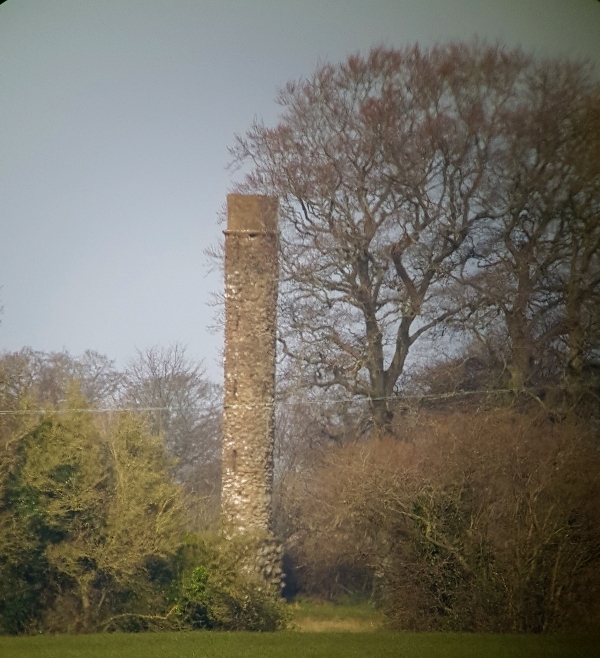 The "Fish Tower" is on the northern cardinal point 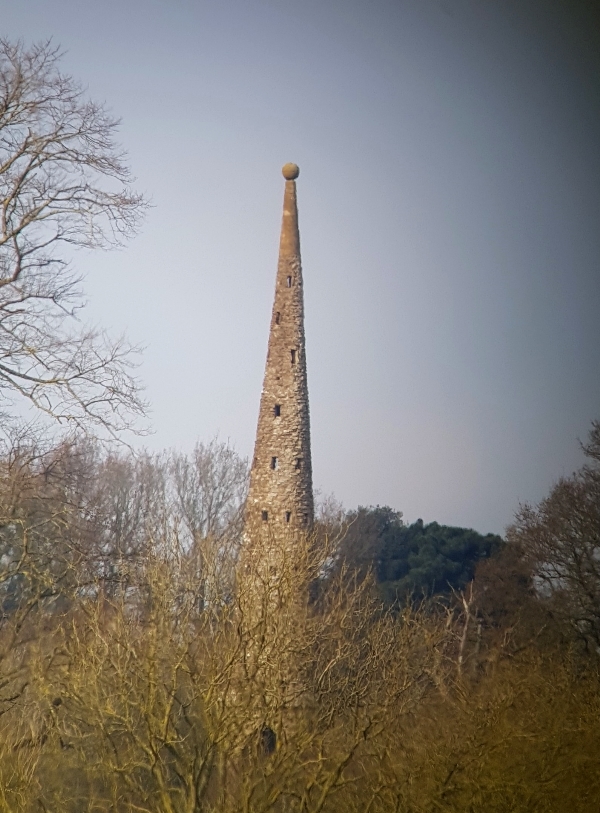 I couldn't see the "Needle" on the southern Border because of the trees. Locals say the Follies were built to give the estate labourers work during a time of depression in the 1820s.

They were possibly commissioned by George Messiter of Barwick to mark the park boundaries at the four cardinal points: Jack the Treacle Eater (a stone arch topped by a round tower) to the east, The Fish Tower in the north, Messiter's Cone (also known as the Rose Tower), which is 75 feet (23 m) high, at the west end, and The Needle to the south.

However, paintings of Barwick House in the 1780s, forty years earlier, include two of the follies.