I didn't make it around the whole of the circuit today because I spent too much time at the Nuthatch nest hole and you will find out why very soon.

It was an amazing morning so full of bird song, I had to pinch myself to make sure it was real, I stood for a minute and listened to: Raven, Great Tit, Blue Tit, Robin, Wren, Green Woodpecker, Nuthatch, Great Spotted Woodpecker (drumming), Pheasant, Rook, Jackdaw and Herring Gull.

I wasn't going to look at the Nuthatch nest hole but something compelled me to, maybe an urge to see the finished product. Well it was finished, it looked perfect and the loving couple were busy taking in nesting material every minute or so. I left the happy couple and wandered off down stream where I stood watching a pair of Blue Tits doing exactly the same thing. 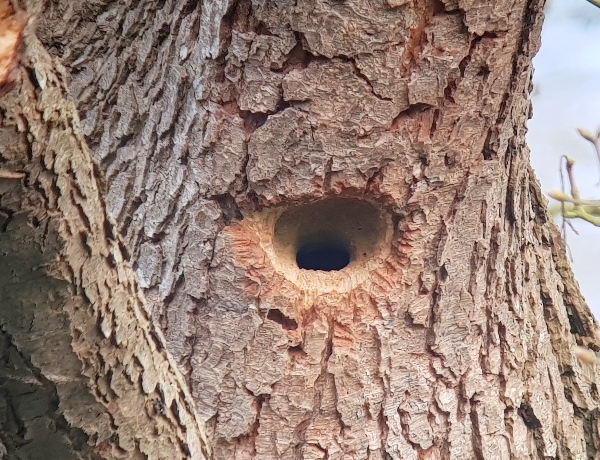 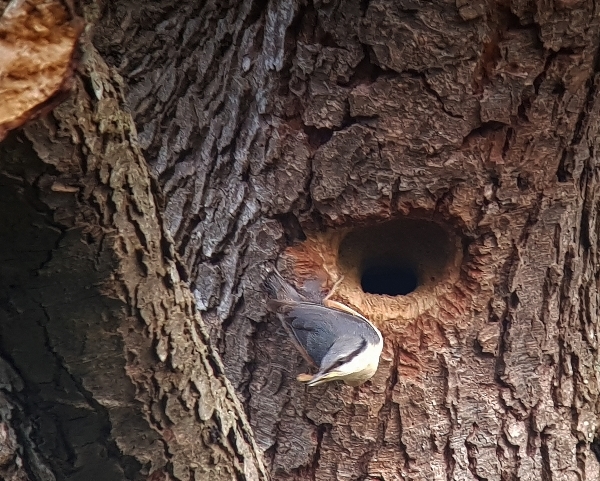 the Nuthatch bringing in nesting material

Then it all happened, all hell broke loose, I heard a Green Woodpecker calling loudly from the tree where the nest hole was and I heard the nuthatches going barmy. I quickly walked backed and found the female Woodpecker attacking the nest hole! By the time I got back into a position to take pictures the woodpecker had been pushed back down the tree a little. 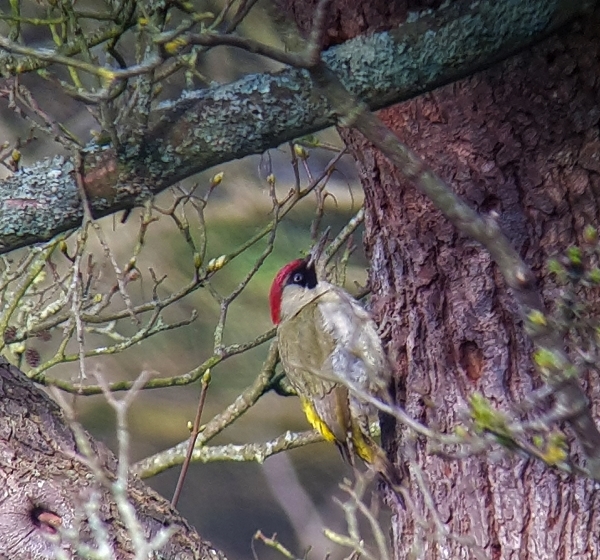 The female Green Woodpecker sitting just below the hole 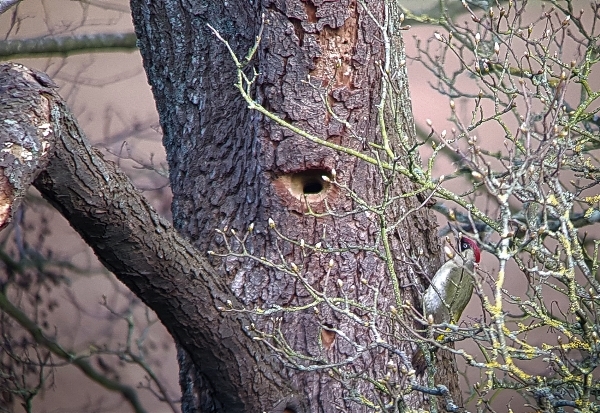 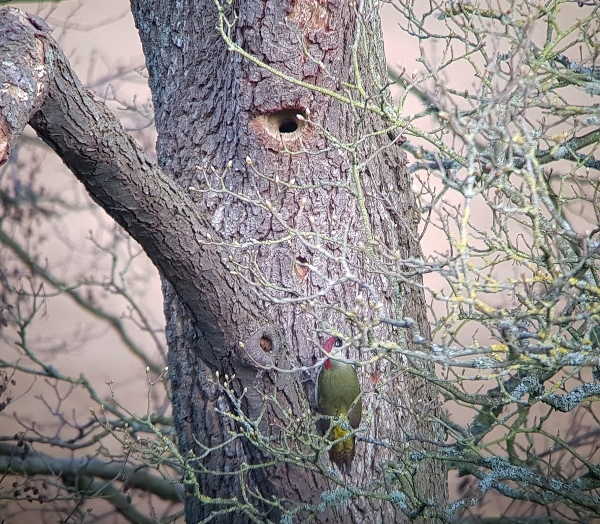 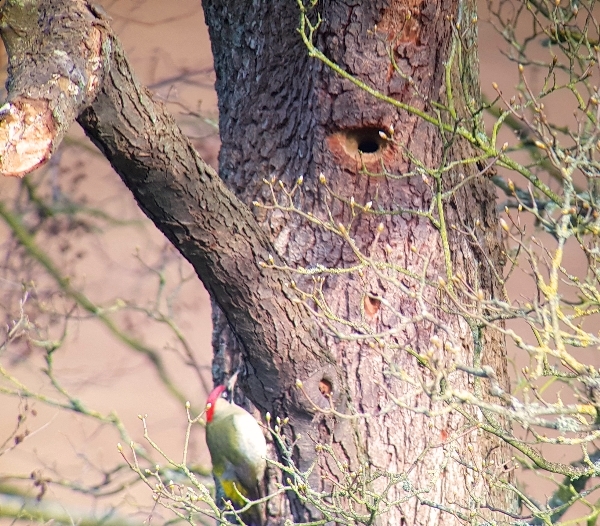 the woodpecker hides from the onslaught of the Nuthatch

I watched for another twenty minutes until the woodpecker was finally driven off, wow, what a fiasco and the saga continues. Dawn had great sympathy for the Nuthatches when I told her the styory later, but why?? They stole the nest of the woodpecker after it had spent a couple weeks digging out the hole!! What do you think? I'm with the pecker!  One last twist to the tale, the female Nuthatch must been in the hole all the time during the 'attack' because as soon as the woodpecker flew off she came out!! I bet she was traumatised, can't imagine that she will stay now.

Green Woodpecker attacked by Eurasian Nuthatch. The woodpecker is trying to reclaim its nest hole after the nuthatches took it over: you have to be quick to see the nuthatch make the attacks pic.twitter.com/FB8XPgEwKS

After that excitement I carried on along the course of the stream and found the Mandarins, either they are getting more confiding or I am far more stealthy than last week because I got fairly close to them and fired off a few shots. 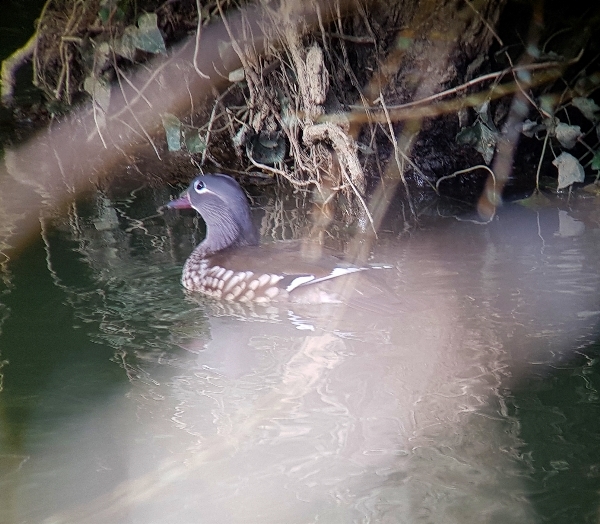 the obligatory pictures of the Mandarins 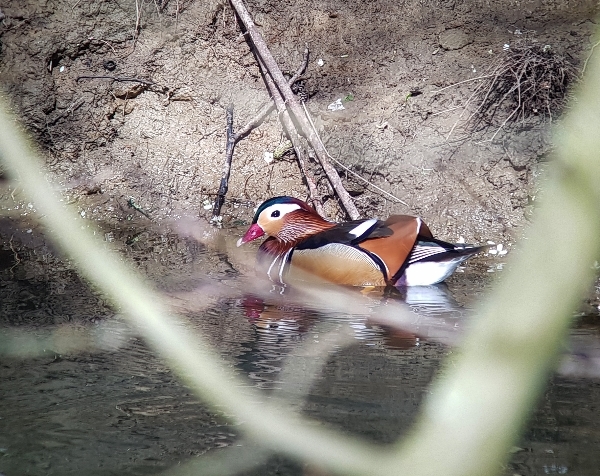 My next piece of stealth was intentional, I was hoping to creep up to the ivy bush and get a photo of the Mistle Thrushes, alas they were not there but something much better was.......

A small thrush flew out of the ivy and landed in the next tree and through the scope I could see that it was a REDWING, wow! another new species for my isolation list, in fact No. 45. The bird was partially hidden so pictures are rubbish, just record shots. 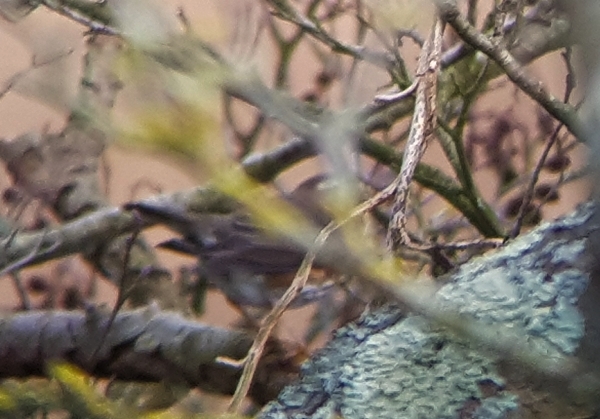 you need a keen eye to see that this is, in fact,  a REDWING - April 2nd in the UK

Then I saw a large thrush in the ivy and on closer inspection it wasn't a Mistle Thrush but a FIELDFARE, double wow! Both of the thrushes should have left the UK and returned to the north and east to breed.  I managed to get a few pics but again they are not great. 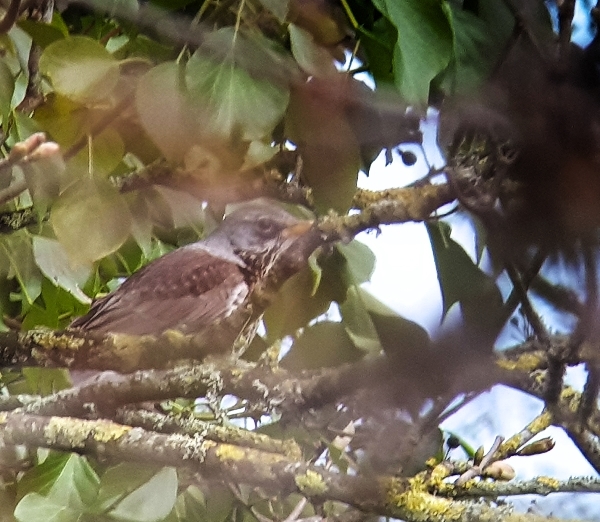 the FIELDFARE - April 2nd in the UK 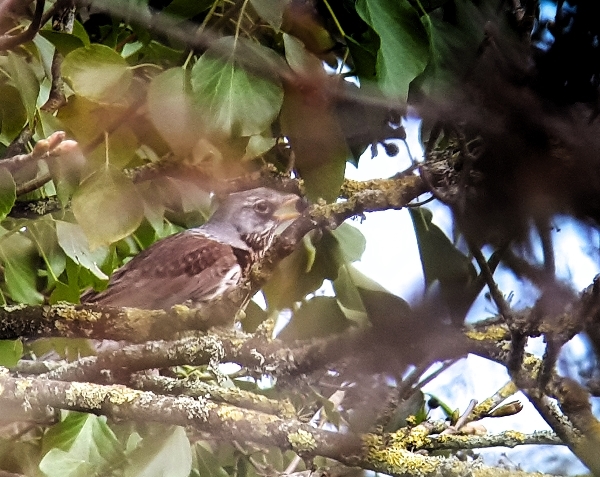 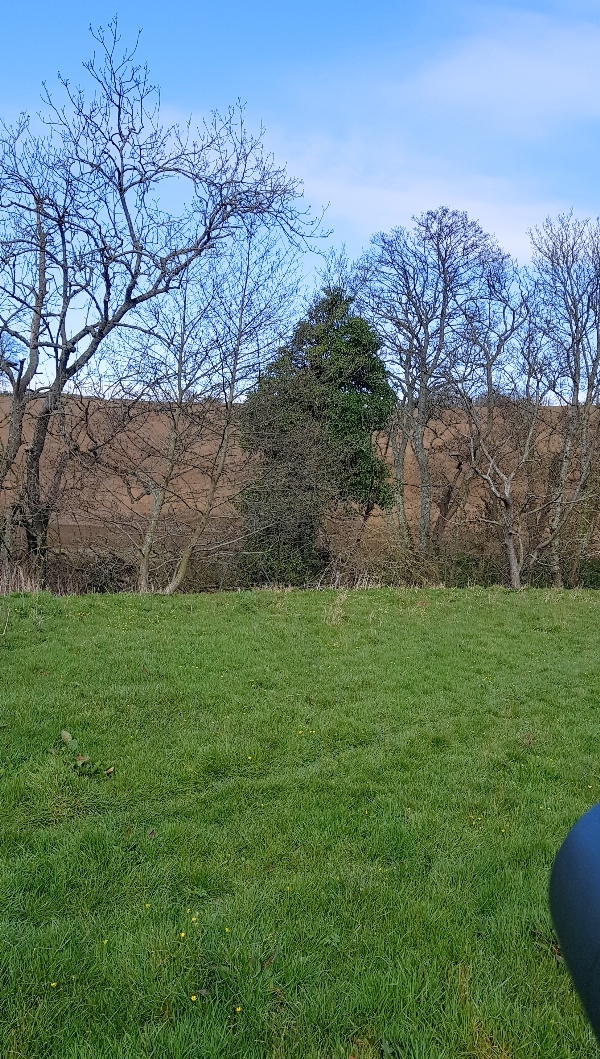 this is the distance I was from the ivy bush, you can see my scope in the bottom RH corner

My third piece of stealth came a little further down stream as I approached the Kingfisher nest hole, nobody was at home or nearby, so after a 10 minute wait I moved on. After a 100 meters or so I flushed the Kingfisher, doh!! Despite their bright colours they are so hard to see perched. Off it went, the usual flash of blue dazzling me as it went.

I walked to where the stream meets the River Yeo and turned around, it had got rather overcast by now and the wind had picked up.

There wasn't any further excitement on my way back but I did stop to look at the Nuthatch/Woodpecker hole and sure enough there was further damage!! There was no sign of the Nuthatches but I could hear the male calling, perhaps his wife had deserted him? 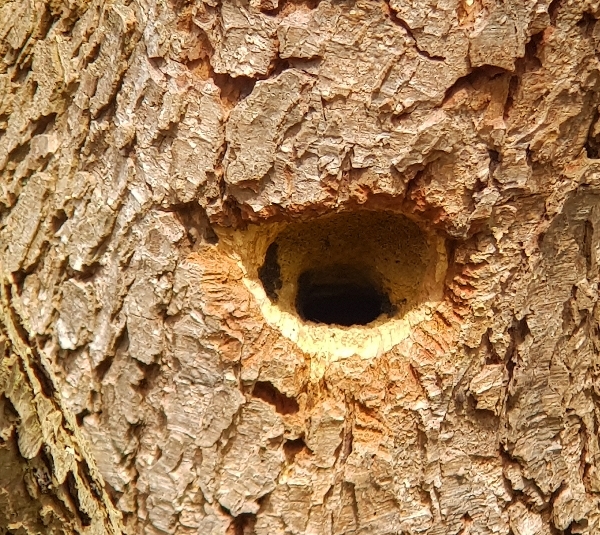 you see the damage to the Nuthatch hole, most of the base has gone and the black areas are where the woodpecker has also chipped away some of the mud.