It was a day of two halves, the first few hours were quite dull but pleasant and the afternoon was very warm with a light breeze. Even better than the weather was the sighting of two new species for the 'isolation list'.

The onslaught of spring is relentless, the buds are bursting everywhere and all shades of green can be seen throughout the valley. Pretty soon it is going to be much harder to see these lovely birdies. Blossom is blossoming and carpets of flowers are underfoot everywhere, what joy it is to be out there amongst all of this glorious splendour.

My usual walk at 8am produced very little, everything seemed a little subdued bcause of the lack of sunshine perhaps, bird song was at a bare minimum and sightings were down. The Nuthatches have nearly completed the repair to the nest entrance, but don't hold your breath, the Green Woodpeckers are still around.

The wren is still nest building down at the water level and the Blue Tit is still clearing rubbish from a potential nest hole.

For about the tenth time I tried to get the Goldfinch in the can, but failed miserably. I don't understand it, they are usually so obliging, they sit on tops of bushes and sing away, but not the ones in Yeo Valley. 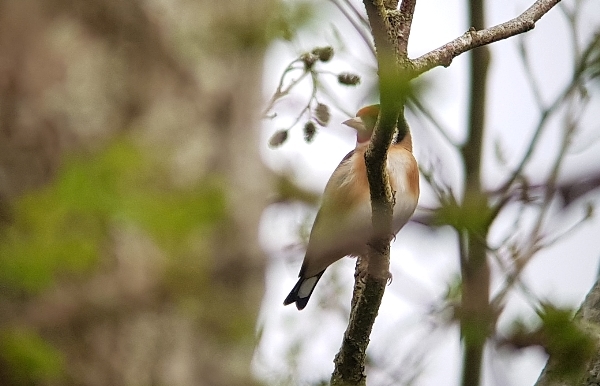 record shot of a Goldfinch

I saw a single Willow Warbler and heard several Chiffchaffs and Blackcpas, at least four Great Spotted Woodpeckers were drumming and at least three Green Woodpeckers were calling. Two Song Thrushes were heard, the first was from my garden as I left the flat and the second was in the usual place along the River Yeo.

I saw my second only Cormorant as it flew over and I had a great, but very brief, view of the Kingfisher. He caught me unawares by flying in from behind me and landing at eye-level just 3 meters away. But he stayed for aprrox. 3 seconds and was gone for good.

I had better fortune with the Green Woodpecker at the 'new' nest hole. I glanced at the hole and saw the bird quickly withdraw from the entrance, so I thought a little patience was required. I stood for fifthteen minutes and the bird done it again, she poked her head and bill out f the hole and immediately withdrew it, then again straight after. This double-peek happened three times before aI got the timing right. So n ow I know that this pair are happily nesting. 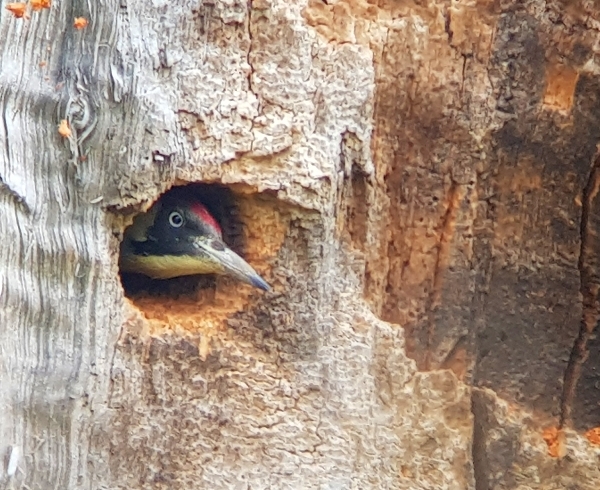 I searched the gorse and clumps of bramble for Green Hairstreak sighting but left without one, afterall it is a bit earlt for them to emerge.

At the end of the usual walk I met Dawn and together we took an extension walk over to Clifton Maybank, a tiny little hamlet of three or four dwellings (inclduing a country house) and a farm. The house is a four storey Grade I listed building made of local hamstone. Its dates back to mid-16th century. 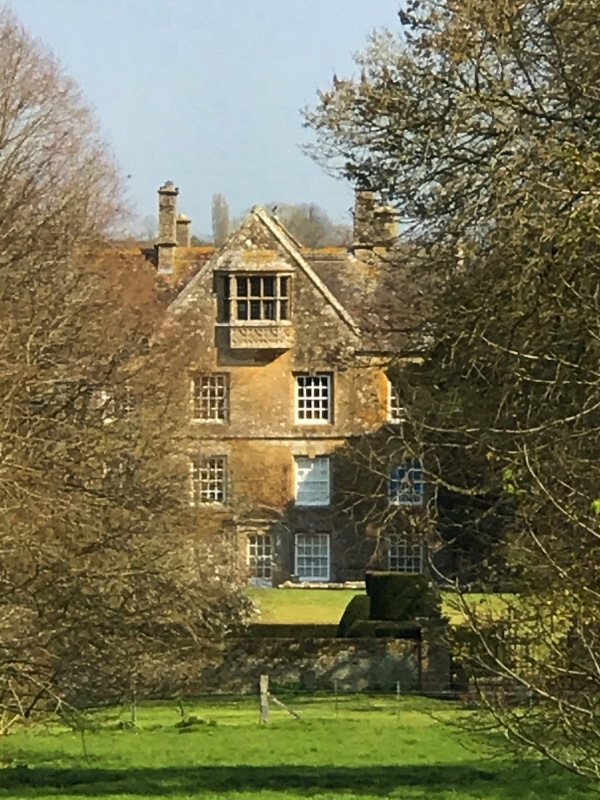 The sun was shining brightly butterflies were on the wing and birds were everywhere. We saw several Brimstones, Small Tortoiseshells, Peacocks, Small Whites and our first Orange Tip Butterflies. Even better was the sighting of a LITTLE EGRET, it was feeding in a corner of a flooded field but we flushed it. We found a whole bunch of Bluebells, lots more wild flowers including Cuckooflower which the Orange Tip Butterfly was feeding on. 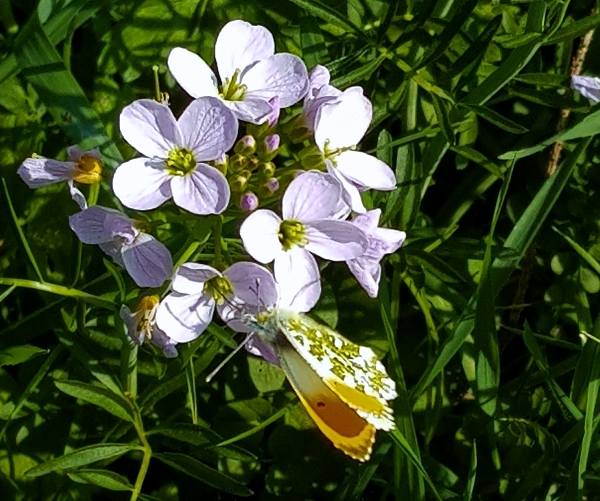 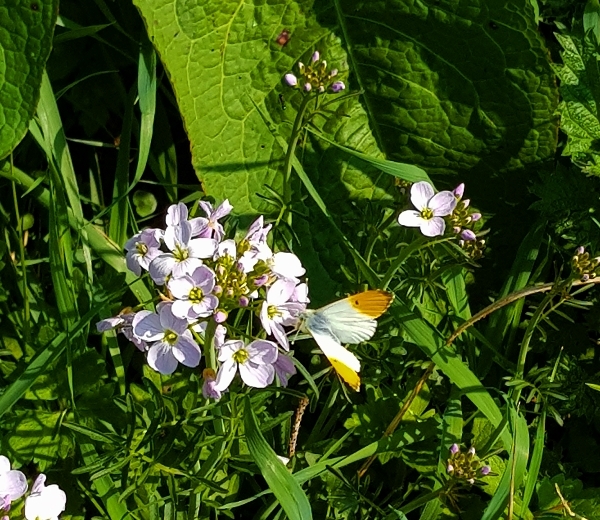 Further down the track and just past Clfton Maybank Farm there is a large Rookery, fifty plus nests, are spread over several trees 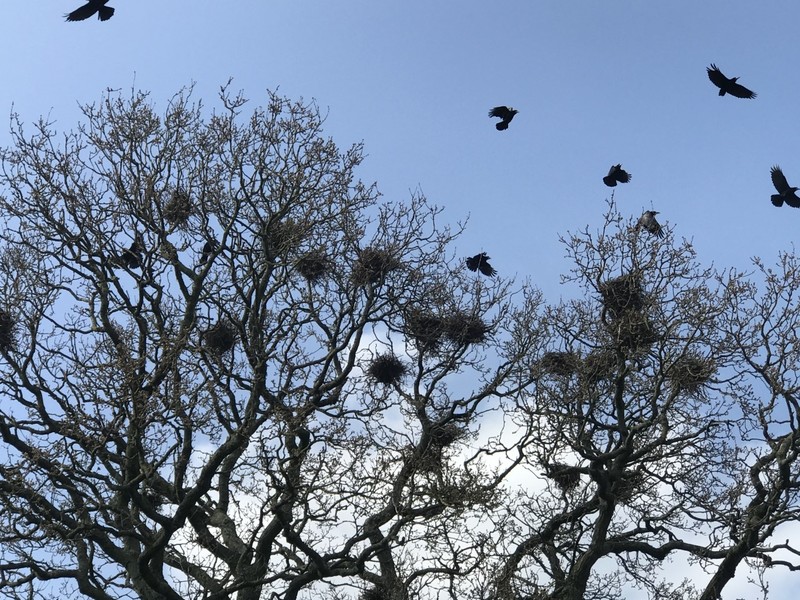 We walked back via a slightly different route and came across a traditional mill pond and that's where we found a pair of MOORHENS, our second new bird for the list.

a host of Bluebells 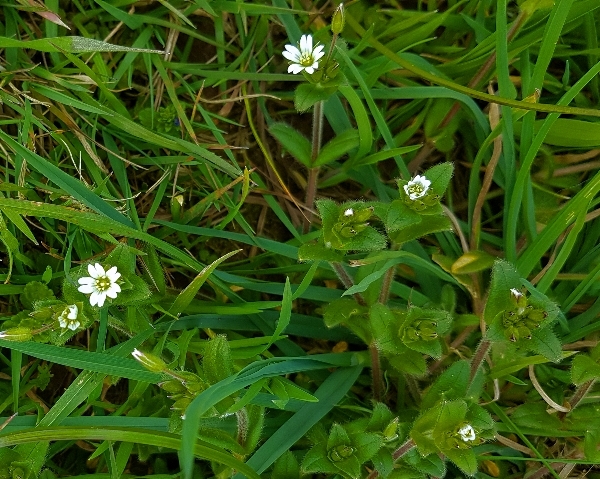 We got back quite late, I had been out for much longer than normal, but we hardly saw a sole and certainly didn't get anywhere near another human bean!!