WEATHER: ditto for yesterday except the breeze was a little cool in the early morning and late afternoon.

Wall to wall sunshine continues and so does the great birding in Yeo Valley. It is such a joy to be out there whilst the weather is so good, I don't expect that I will be doing much when it is pouring with rain next week. Four new species were added to the 'Isolation List' three of them were seen in Barwick House Lake this afternoon.

After walking just 50 meters along the grassy track towards the valley I heard a GREENFINCH calling and up above me on top of a tree was a pair of GREENFINCHES. These are first ones that I have seen during the entire isolation period. Unfortunately they were sitting directly in line with the rising sun and so were quite silhouetted, my pictures have been lightened quite a lot. 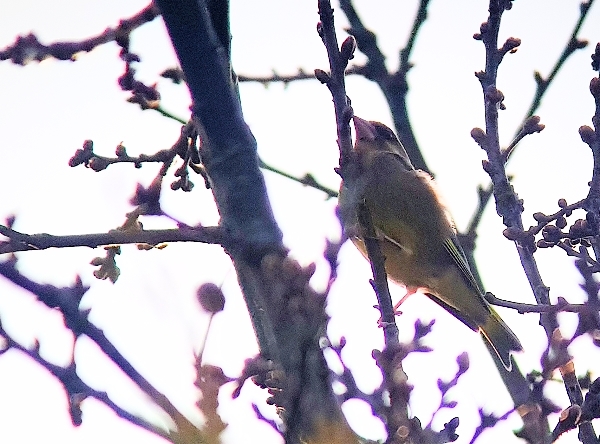 record shots of the Greenfinch 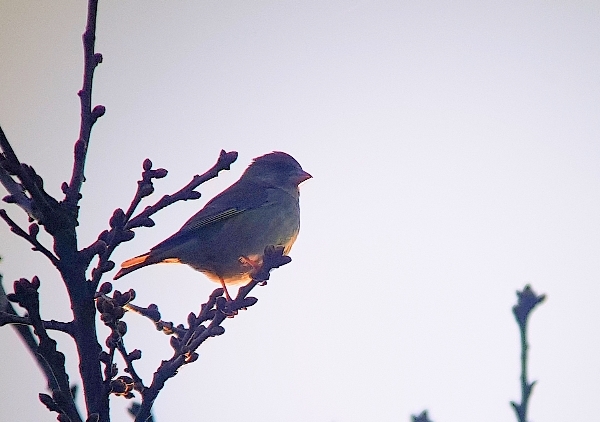 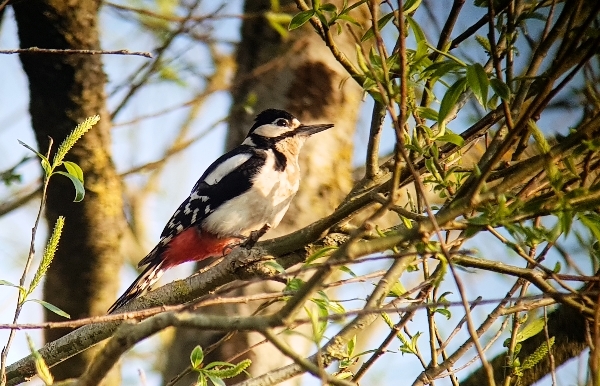 I enjoyed 30 minutes watching the Wrens finish their nest building, the male had a habit of landing on a stick each time he brought nesting material, which was protruding from the stream, He also sang whilst carrying a mouthful of material now that's multi-tasking for you. As the sun came up over the hill the stick and bird became too bright for my phone to handle so I never got a decent picture. The Blue Tits were also busy with their nesting arrangements.

This is one of my favourite places to stand, it has been a great place for sightings. It is where the stream meets the River Yeo and all this flowering scrub attracts a host of speciees.

I had several sighting of Mandarin Ducks but only males, I am hoping that the females are sitting on eggs. The Kingfisher showed just once, I have come to the conclusion that the only way I will photograph this species is to sit still for a couple of hours on the bank of the stream, which obviously is against current outdoor practice. 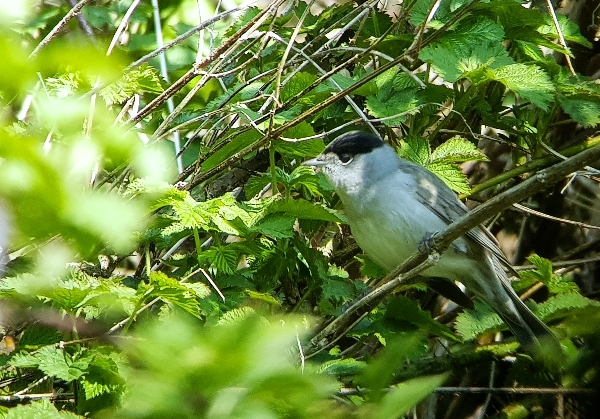 Blackcaps, Chiffchaffs and Willow Warblers featured many times in my observations, I saw all three of them several times. I only got a picture of the Blackcap but it was much better than the previous efforts. 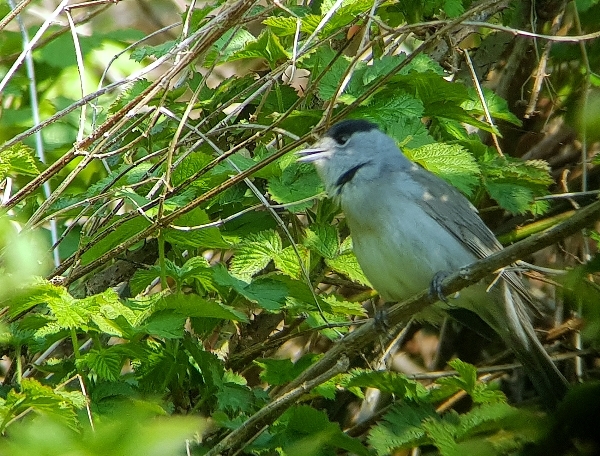 I finally got to photograph a European Goldfinch, at last one sat out for me in a good position. 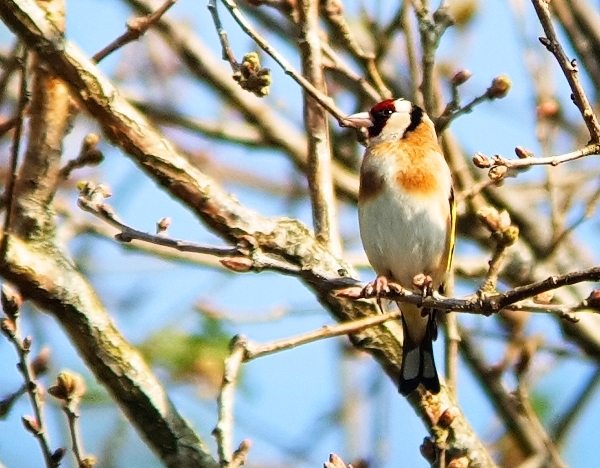 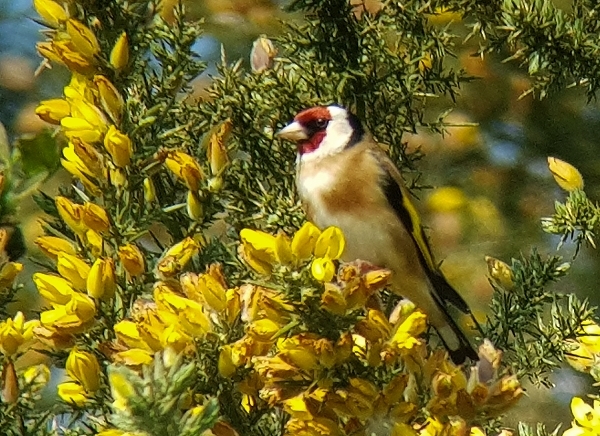 Many butterflies were on the wing too, plenty of Orange Tips, Peacocks, Brimstones and Small Tortoiseshells. I left the valley and walked back home where Dawn met me and persuaded me to walk across to Barwick House to look at the lake and the huge grounds, there is a public footpath that crosses right through the middle of the area.

Barwick House in the background with the lake

Along the way we found half a dozen new flowering plants and a new Butterfly for the list, a SPECKLED WOOD. We watched a Raven being chased around by a couple of Carrion Crows, they performed some pretty impressive aero-batics, in the picture below the Raven is actually upside down in mid-air!! 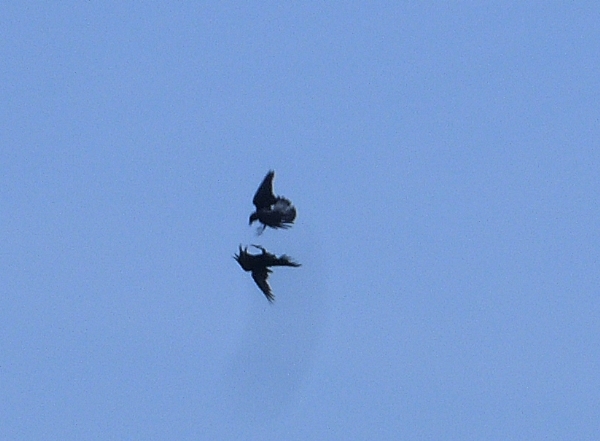 A Crow attacking a Raven, the Raven is actually flying upside down!! Amazing

At the Lake next to Barwick House we found three new 'Isolation Ticks' :- Common Coot, Little Grebe & Tufted Duck there was also Mallard, a pair of Manadarin Ducks (as if I hadn't had enough of those?) and also Moorhen.  To top it all a Green Woodpecker flew across the lawn in front of us, I must say that the density of the Green Woodpecker population around Stoford is very high, I now know of at least 4 pairs in a very small area. 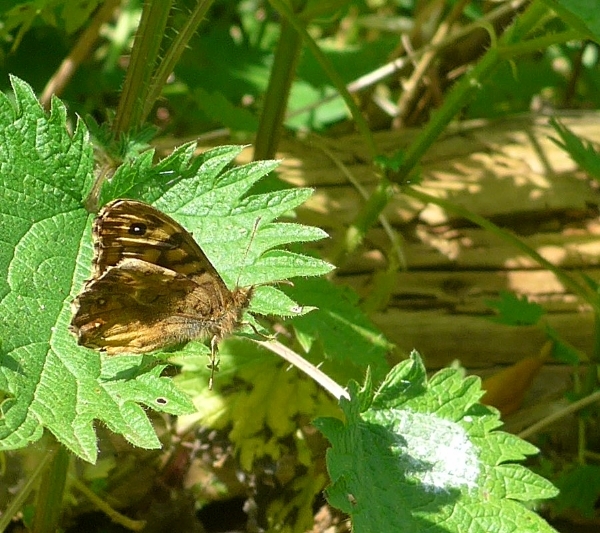 This Speckled Wood refused to open its wings

We walked back in the midday sun, it was really quite warm now it felt like a lovely day in flaming June.

An obsevation of interest was a bunch of Pheasant feathers which I found this moring in the grass along the river Yeo, if you look carefully you can that the quills have a very clean cut-off and the 'nib' is missing. This is a clear indication that the feathers were bitten off and not pulled out - most likely done by a fox!! 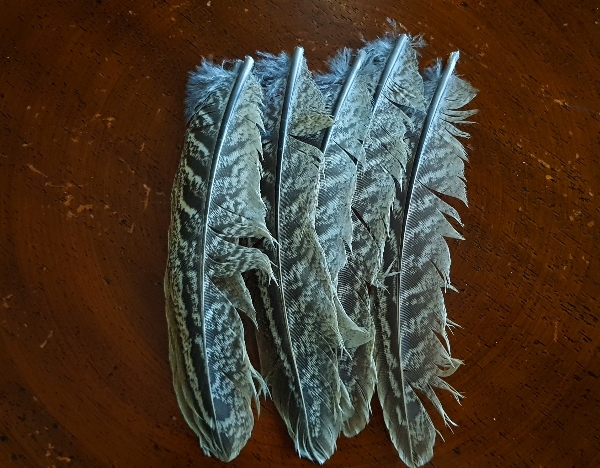