WEATHER: very windy and very cold. Dull and overcast until lunch then blue sky all afternoon

Wow!!  That was a bit of a shocker, it really was windy and properly cold, I'm surprised that I went out.

For many days now my world has been painted with vibrant bright colours, in full gloss paint. Every day I have seen many shades of green, brilliant yellows with swathes of white and even splashes of red with flashes of azure blue. The colours of nature are blossoming and singing out in the spring sunshine a chorus of new life, hope and expectation.

But today...... burrrr, I'm not so sure, all the colours have turned from gloss to matte and the vibrant life that was all around me yesterday has slunk away and sought shelter from the easterly blast. However, Mother Nature's heart is still beating, even if the pulse has slowed somewhat, I did hear bird song and I did see lots of activity even if the viewing conditions were a little uncomforatble.

The most exiting thing to happen this morning was the sighting of two OTTERS!!!!  shazam! so it is true, they are here, it confirms two things, one, the  animal I saw a few days ago was definitely not an Otter, and two,  the beast seen by my new friends Tony and Kath was, from their description, very likely an Otter.

The Otters were ahead of me along the stream very close to the Nuthatch nest, I got off these pictures (see below) before I lost sight of them. I ran (walked quickly) down stream to get ahead of them and stopped just after a bend hoping that they would swim towards me. I waited but they didn't show, so I went back and saw them again just disappearing around said bend. So I hurried ahead and waited again, this time they didn't show at all, I had lost them!! Doh!! Anyway, it was great to see them and I got really excited watching them ducking and diving along the stream.

Otters are normally nocturnal, but are sometimes crepuscular (twilight), I guess because of the dull morning light they had stayed out a little longer than usual. 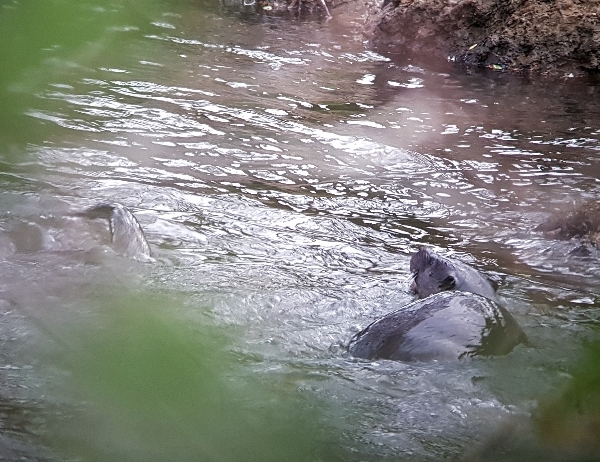 one of the two Otters 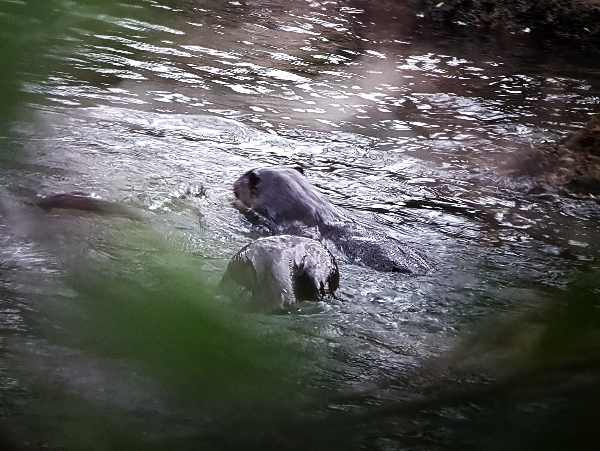 there are actually two in this picture 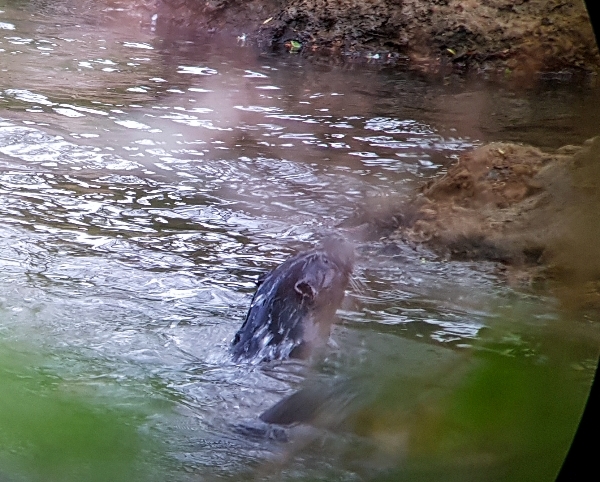 By the way, the Nuthatches nest remains intact but I never saw or heard any Nuthatches nearby. I then visited the 'new' Treecreeper's nest and despite having freezing cold hands I staked out the nest hole hoping to photograph the birds arriving with nesting material, the shots below show my poor efforts. 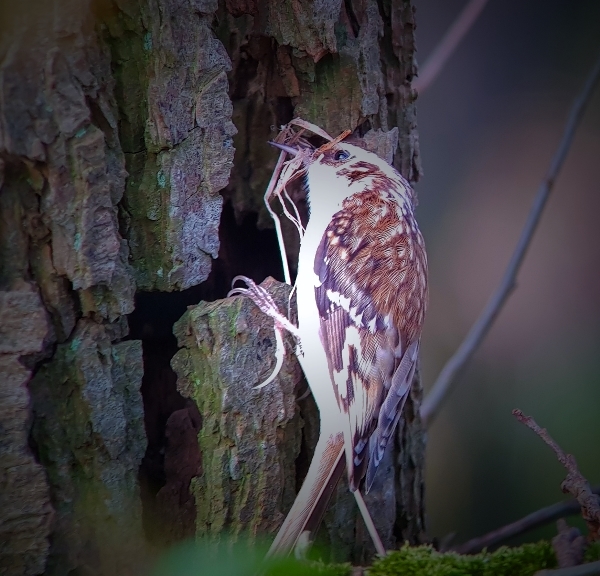 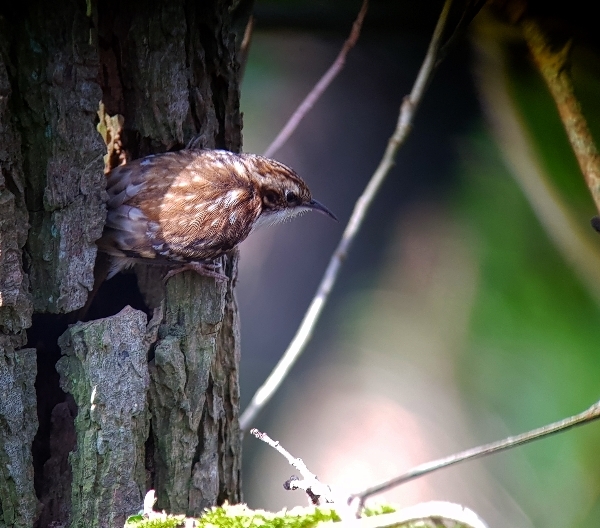 and on the way out

At the end of the stream and all along the River Yeo I was sheltered from the wind and the cloud cover began to clear. I heard Blackcap and Chiffchaff and not much else. What I did manage to see was a Song Thrush, up until now I have not been able to photograph this bird, today I did, well things were picking up after all. 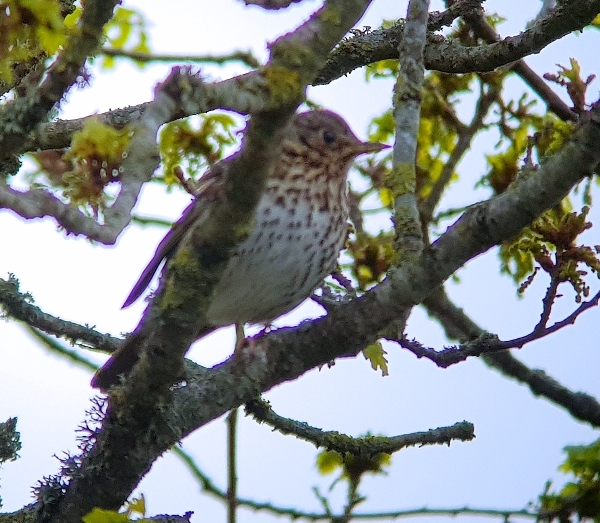 Yesterday I found a Linnet for the first time during the last 30 days, today I found two! In fact, it was a pair and better still, they were building a nest in the brambles on the slope of the hill. Usually the male has a lovely red forehead and superb red markings on the breast and flanks, but this one had none of that. He was more colourful than the female (who, as usual, was doing all the nest building) but he had no red on him whatsoever. 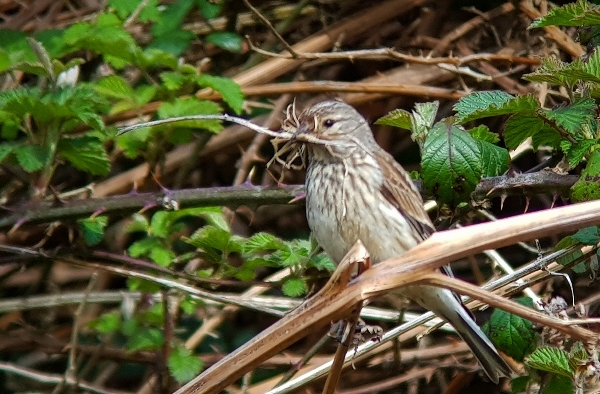 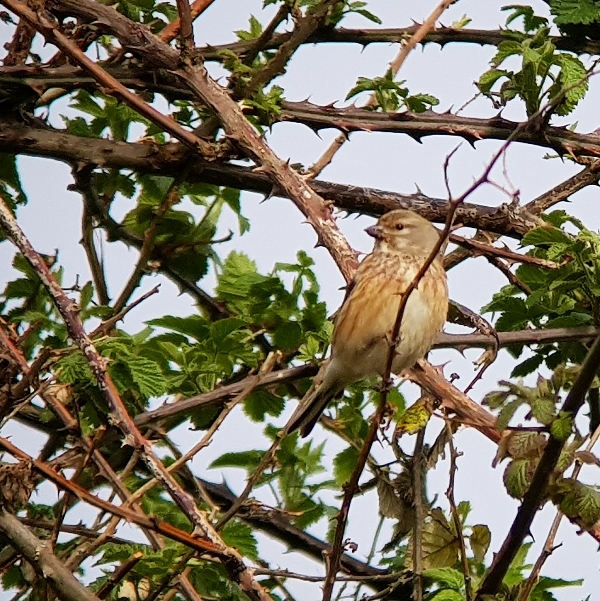 and the male doing nothing?

A couple of Barn Swallows flew over, they didn't look as though they had too much control of their flight path but the Jackdaws and Rooks looked perfectly happy up there. I decided not to walk up to the top of the hill today just in case I was blown off and let loose like an untethered kite drifting over a host of celandines.

My return route was back along the stream hoping for another glimpse of an otter, the Kingfisher dashed by twice, but I was nonchalent, he couldn't taunt me today I had bigger and better things to photograph.