WEATHER: when you don't think it could get any better, it does. Another superb birding day, with wall to wall sunshine.

Just as I did yesterday I stood in the garden and watched the birds in the meadow at 6:45am before I set off on my walk. Fewer Wood Pigeons were there but a lot more gulls had arrived. I noted the usual pair of Red-legged Partridges and a pair of Pied Wagtails. Then the Stock Doves appeared, I moved very quietly and slowly towards the fence, click, click, in the can!! Not the best shots beause of the light and the distance. 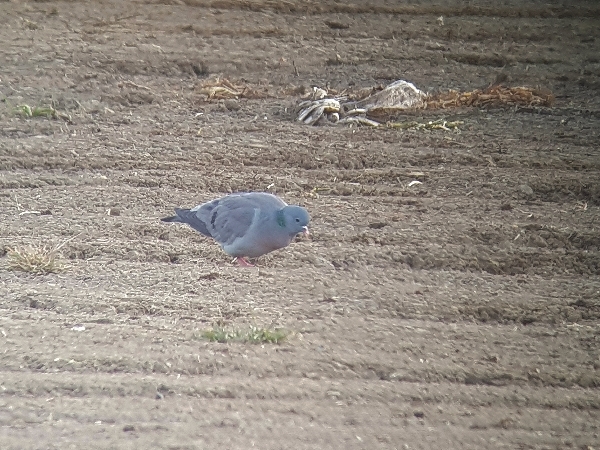 one of the two very flighty Stock Doves

The other day I was heaping praise on to the little Wren singing everyday from in the brambles, I had forgotten to say that a Robin not far away had been just as enthusiastic and longstanding. He reminded that I had been a little remiss by singing at the top of his voice today. So I took a picture of him once more. 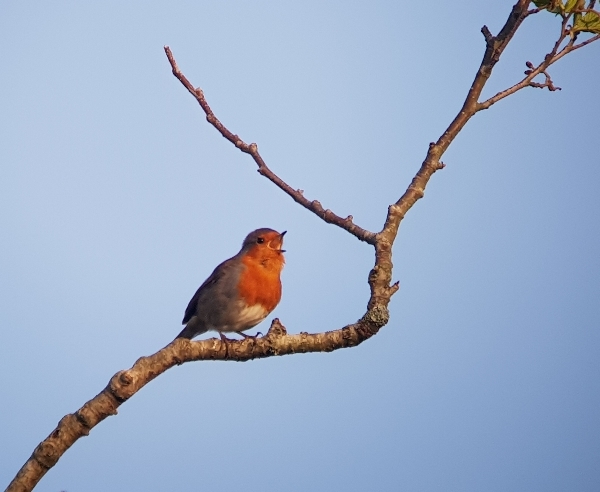 this picture has not been enhanced in any way, the morning sunlight is making the bird look extremely red.

I walked past the Nuthatch nest and then the Green Woodpecker nest hole, I saw a single Nuthatch and there was no sign of the woodpeckers. These last few days it is much more difficult walking northward (which is the direction of the stream) because the sun is now up above the hill even at 7am. and gets in my face. 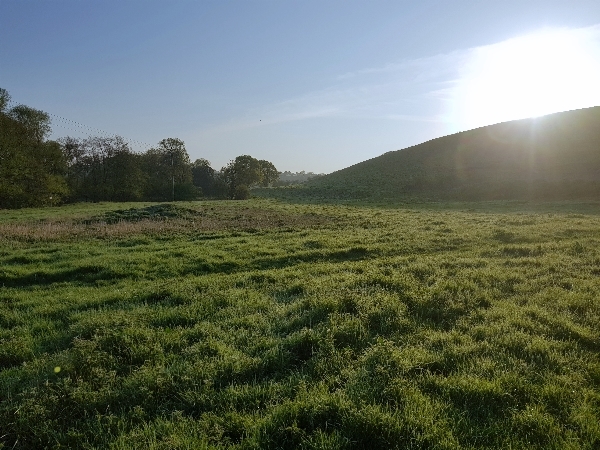 the sun rising over the hill at 7am.

Next, I spent about 30 minutes standing near the Kingfisher's nest hole with no luck, not even an azure flash-by. However, the little Wren kept me happy all the time I ws there. I have to admire the work ethic of this little chap, he would sing his little heart out and then mooch around in the pile of debris at the side of the stream and come out with some nesting material. 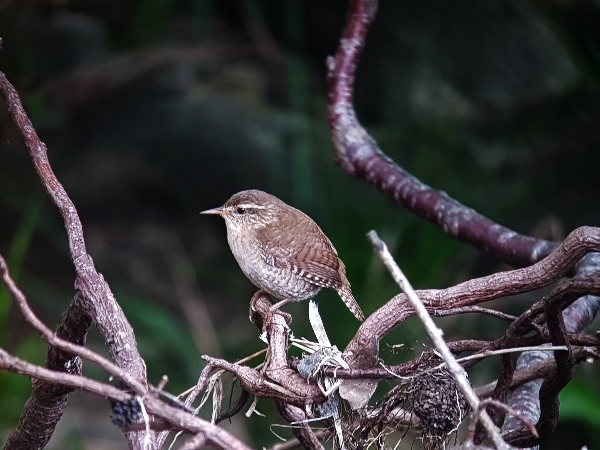 my little jenny Wren at the Kingfisher site 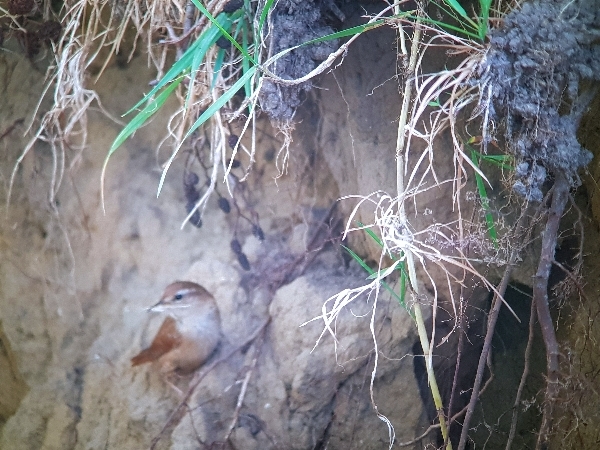 now with nest material just below his nest

I then bumped into a Pheasant that looked exquisite in the morning sunlight, he was quite casual, walking slowly even though I wasn't too far away. I noticed that he was holding his tail up high because the grass was very wet with dew. 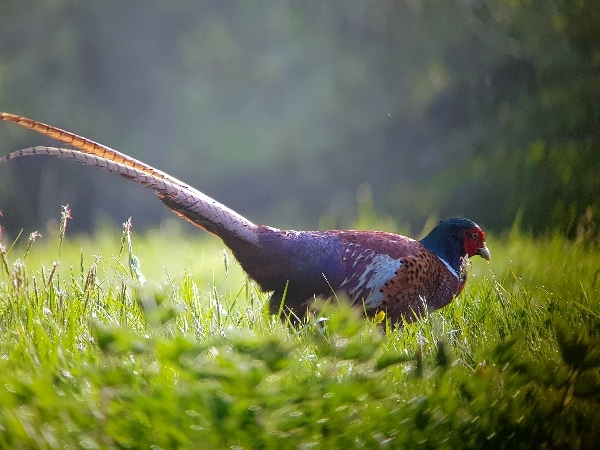 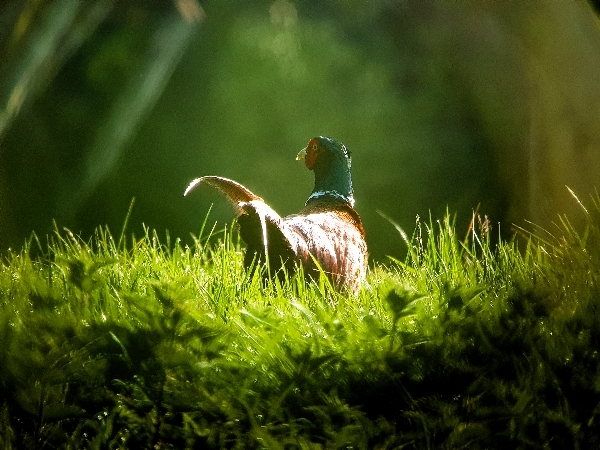 At the junction, the confluence of the stream and the river Yeo I stopped in my usual place, it was very quiet there. I turned around and look southward, the scenery was gorgeous. What great joy this brings to me, I truly love being out here in the great British countryside.

A Chaffinch sang out and I thought of Robert Browning's poem, Home thoughts from abroad, I used to think of this a lot when I was in Spain. This is the first full April I have spent in the UK for 18 years!!!

'Oh to be in England now that Aprils there...........while the Chaffinch sings on the orchard bough, in England - now!

Movement in the sky broke the spell I was under, a Little Egret flew over to the west and a couple of seconds later a Grey Heron flew across in the opposite direction. 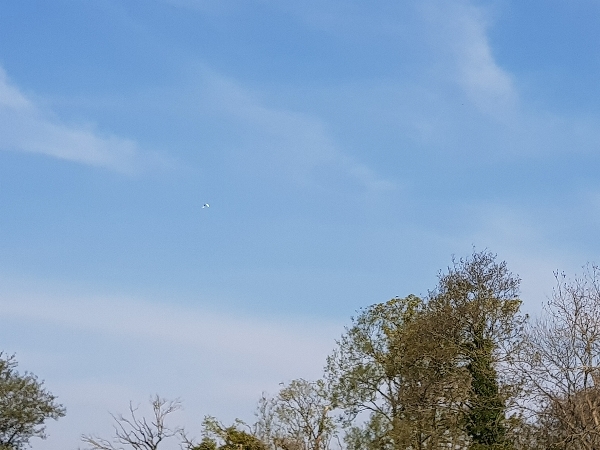 can you see the Little Egret in this picture, ha!

I walked on along the River bank and arrived at the base of the hill where the large bramble clumps are. I am hoping for a Common Whitethroat to appear at some stage and again Robert Brownings poem comes to mind, the opening lines of verse 2,

And after April, when May follows, The Whitethroat builds, and all the Swallows!

Perhaps I will have to wait for May for my Whitethroat sighting?

I walked up and over the hill enjoying the warmth of the sunlight and once again I stopped near the entrance gate, I had to move off the track because a Pick-up truck was coming into the meadow. As the truck got close to me a Field Mouse ran out across the track and got himself squashed. I couldn't believe his back luck, how many vehicles come into the fields?? One a week maybe! Poor little mouse, he was dead as a........dodo.

At the stream near the entrance I saw a couple of things worth mentioning, the first was a Beautiful Demoiselle Damselfly, a female and a very early specimen, they usually fly from mid-to end of May. 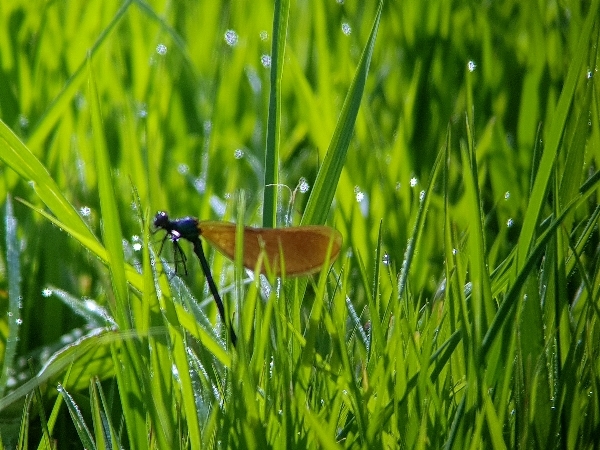 The other thing I noticed was a Grey Wagtail in the stream. A few days ago I noticed an adult male Grey Wagtail without a tail, maybe just a Grey Wag!! Ha! This one today had a small regrowth of the tail feathers and I assume it is the same bird, surviving and with a mate despite being tail-less. 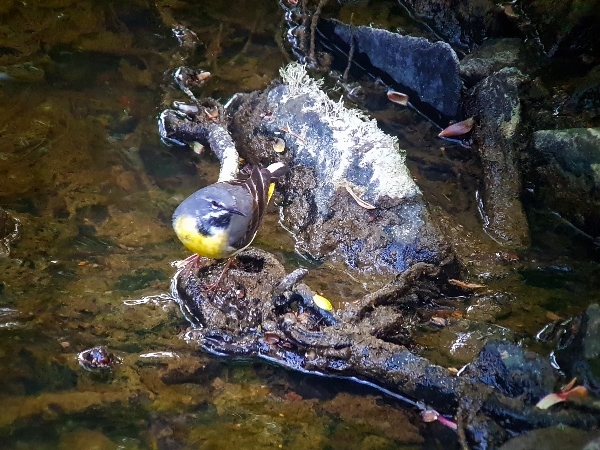