Well another month has arrived and on we go with lockdown, isolation and lovely walks into the beautiful meadows of Yeo Valley. It was a wet start to the morning and then it eased off until I was about a mile into the walk and then I got a bit of a soaking, once again!! But eventually the sun came out to play. 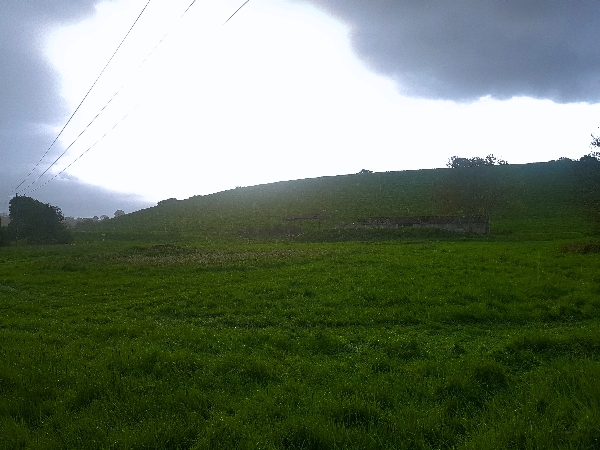 the sun breaking through after the rain

I started off well with my May list, a pair of Greenfinches flew over me as I walked across the car park, I also saw Jackdaw, Robin, Blackbird, House Sparrow and Wood Pigeon. All in all I saw 35 species of birds, not a bad start to the May list. 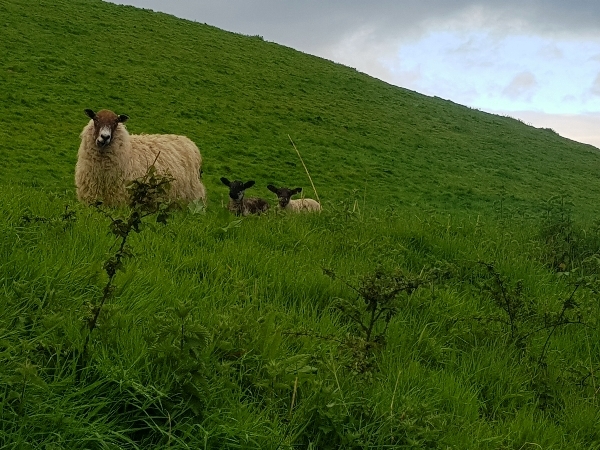 As I entered the farm track I heard a Green Woodpecker calling and the little Wren in the brambles was singing to me. I went to the Nuthtach nest site to see what was happening and I saw nothing there, about 50 meters further along the stream I can stand in one place and watch a Green Woodpecker's nest hole, a Wren's nest and a Blue Tit's nest site and that is exactly what I did. Whilst I was there a Little Egret flew past me, a Raven flew over the hill calling and a Red-legged Partridge called from the field beyond the stream. 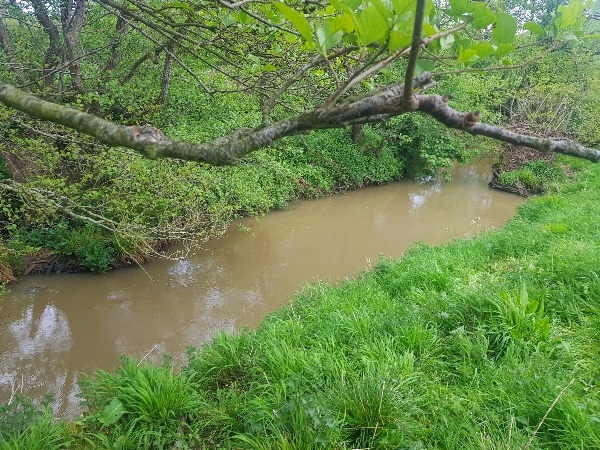 the stream looks muddy and the level is now quite high 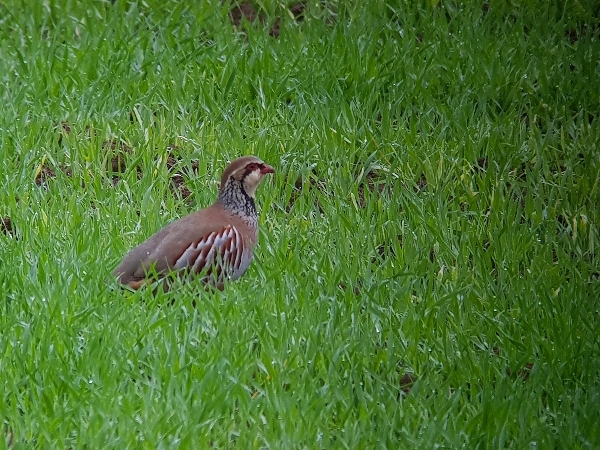 This Wren's nest if you remember was built in a very precarious position, just 15 centimeters (6 inches) above the water. Over the last few weeks the water level has dropped significantly and so the nest was safe. However, after the rain showers over the last three days the water level is now just 5cm (2 inches) below the nest, any further rain and the nest will be flooded. I saw the Wren at the nest and he didn't look too happy. 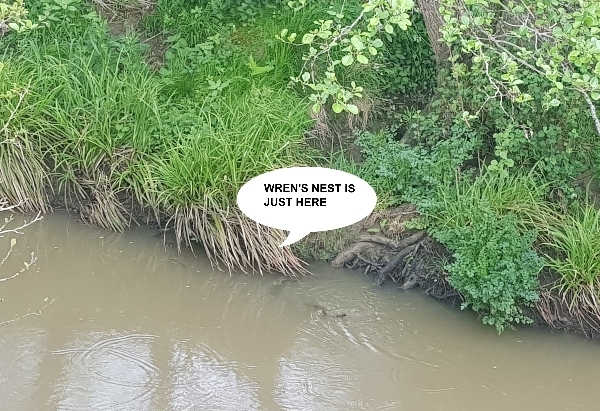 A Green Woodpecker called from very close to me, I set the scope onto the nest hole and sure enough the female approached, she poked her head into the hole two or three times and then backed away. Then the male emerged from the hole and she went in, a classic changeover for the incubation of the eggs. 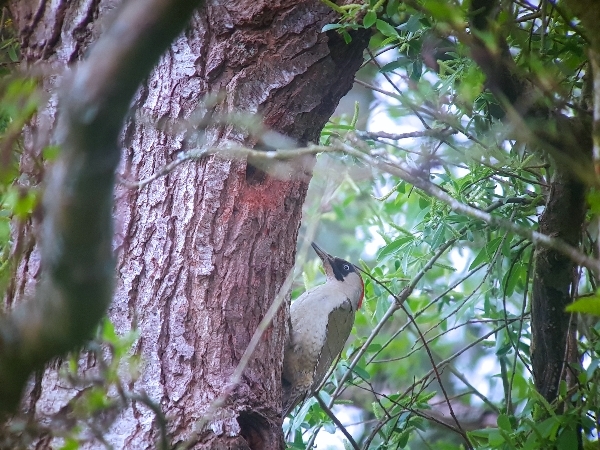 From then on I found it difficult to get a picture of any birds but it did brighten up quite significantly and it got a little warmer. At the river Yeo I stopped to watch a Blackcap, then a small 'charm' of Goldfinches appeared and a surprise sighting was of a colourful male Bullfinch. 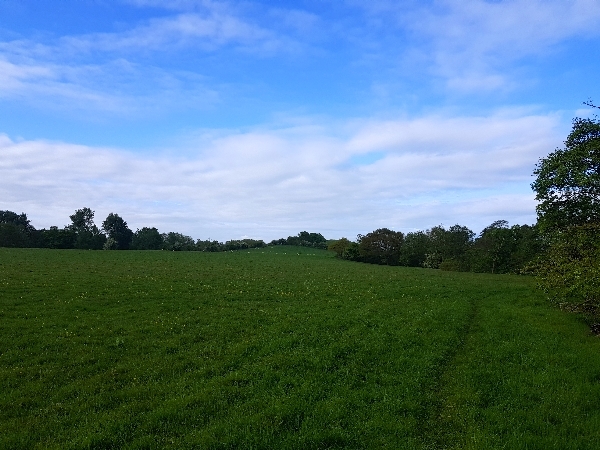 two hours into my walk the sky cleared

At the base of the hill where large clumps of Brambles grow I watched a Song Thrush collecting food, a pair of Linnets dashed about in the brambles and a Treecreeper called incessantly from the row of trees adjacent to the river. I eventually found him and managed to get a quick shot off. 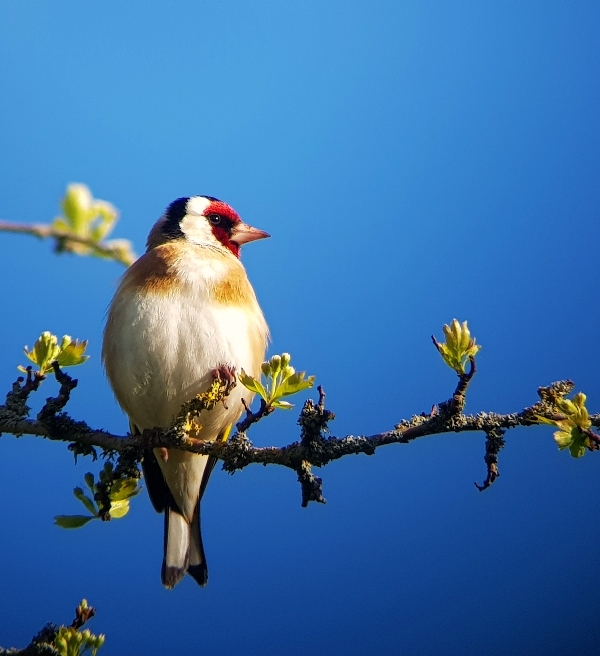 nice picture of a Goldfinch 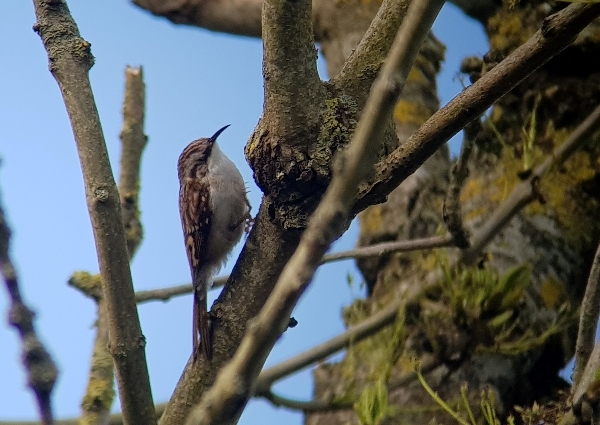 Treecreeper, I was trying to catch him singing but he shut up when I took the shot, he didn''t give me a second chance

Back amongst the sheep in the first meadow I tried to find a Nuthatch without success but I did see the Grey Wagtails on the delerict building. By now the sun was well up and breaks in the cloud produced some warm sunshine. It wasn't long before a host of butterflies were on the wing, it has been three days since I saw one because of the rain. 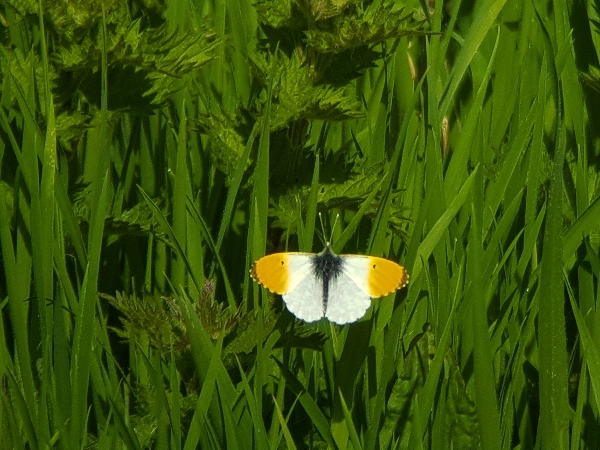 Orange Tip above and green-veined White below 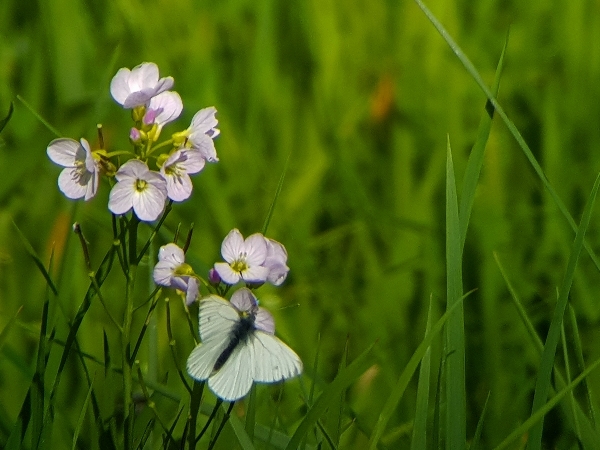 I managed to get a shot of Orange Tip and Green-veined White and I recorded a new species for my list when I found a BROWN ARGUS feeding on a cuckoo flower. Whilst was taking his picture a Dark-edged Bee-fly landed on the same flower. I also saw half a dozen Beautiful Demoiselle Damselflies and plenty of bees were out. 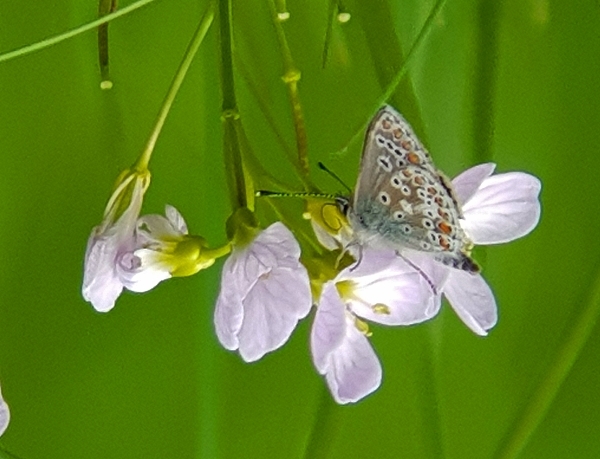 Brown Argus, I had to invert the picture to make the butterfly look upright 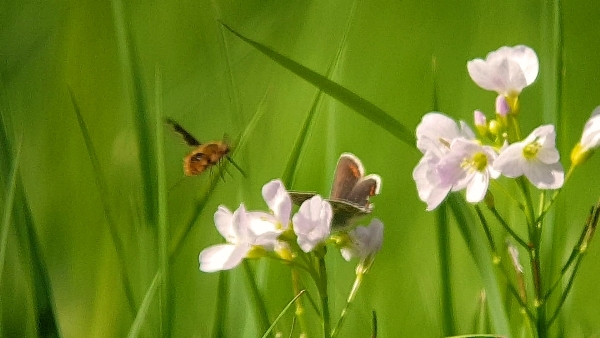 I really liked this little taster of May and I am really looking forward to savouring the rest of the month.