An excellent day, glorious weather and a joy to be out being a part of it. I started at 6:45 and by the time I had reached the entrance to the farm track leading into the Yeo Valley I had ten species on the list. Once on the track I added Greenfinch to the list, this is the first time I have had a chance to take a picture of this now uncommon species. 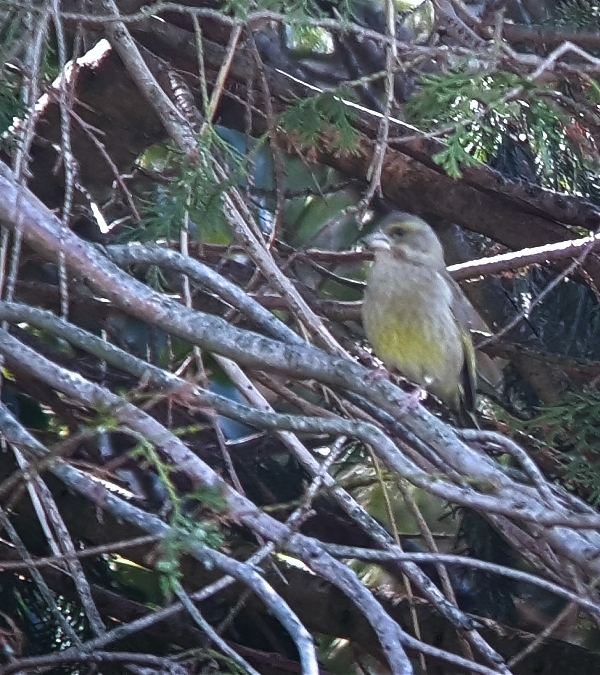 a record of the female Greenfinch, unfortunately the male flew off too quickly.

Walking along the side of the stream I stopped at the Nuthatch site and still found the nest deserted, I've no idea what happened there, the nest looks intact. At the first Wren's nest, the one down on the water's edge, the male was singing loud and proud. 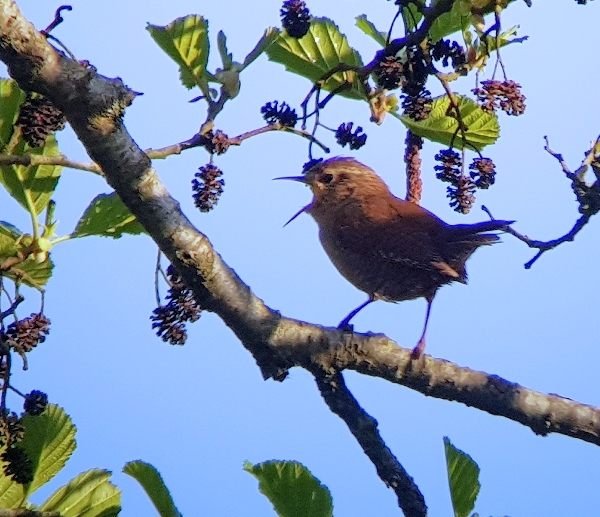 You can see why the Wren sings so loudly, look at the size of that gape!!

Now at the Kingfisher site I only spent a short time there, I think it will be much better when they are feeding young, I gave it twenty minutes but had no luck. The usual birds appeared as I walked down to the river Yeo, I saw Grey Heron, Little Egret, Raven, Song Thrush, Common Pheasant, Blackcap, mallard and Mandarin Duck. I heard a Great Spotted Woodpecker drumming and saw a Green Woodpecker in flight.

I stopped for while at the Junction of the stream and the River Yeo, a Marsh Tit called from across the river but I never saw it. The Kingfisher flew from the River, he cut across the corner of the meadow and headed upstream, I could see clearly that he was carrying food, very interesting! A jay then did exactly the same thing but a little further away and he too was carrying food.

At the bramble slopes I searched for butterflies and found just Ornage Tip, it wa still a little early in the day. Plenty of Beautiful Demoiselle's were on the wing and I found my first LARGE RED DAMSELFLY. 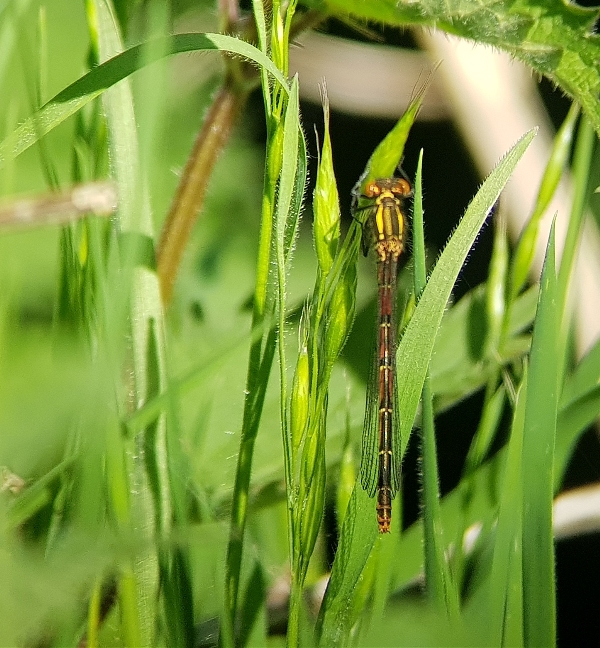 I checked the fence on the far side of the river and saw just a Robin sitting on it, a Chiffchaff called from the Grey Poplars and the Cuckoo was noteably absent, perhaps he has given up looking for a female on my patch? 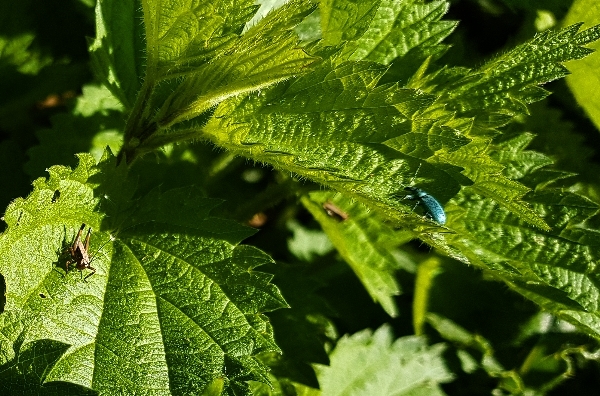 A tiny specimen of a Field Cricket and a Green Nettle Weevil - sitting on a green nettle.

I walked across the meadow, back to the stream to look for the Kingfisher again, I spent another 30 minutes there with no luck. My walk back home produced Grey Wagtail and not much else. It had been a lovely morning walk. 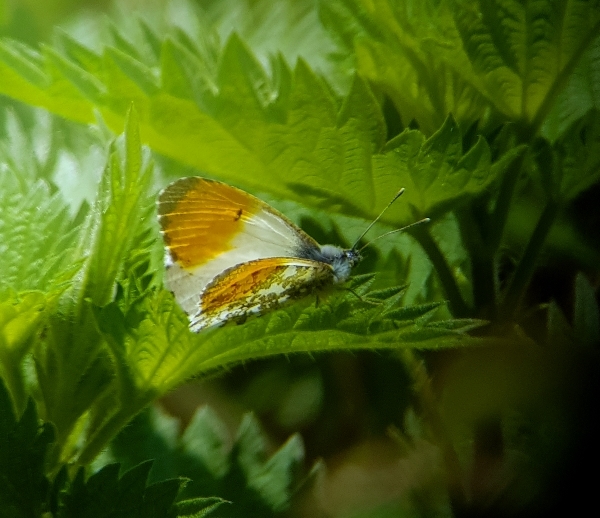 Orange Tip taken on my patch this morning

After lunch lunch Dawn and decided to give the car a spin, it had been sitting doing nothing for 50 days, apart from two short journeys. Earlier I had spoken to Guy Campbell about a site that he was visiting and it sounded a good place to go. It took us 10 minutes to get there and we spent a couple of hours walking in new territory. 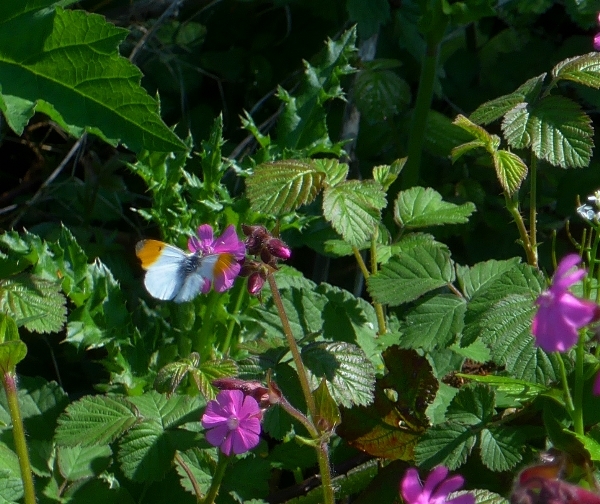 The public footpath ran alongside several cultivated fields with very little set aside, a large pond sat at the bottom of the slope. The fields were surrounded by very mature hedges with lots of mature trees. I heard two Common Whitethroats in the first hundred meters, also Blackcap, chiffchaff, Chaffinch, Wren and Robin. We saw one of the Whitethroats and the Chaffinch. 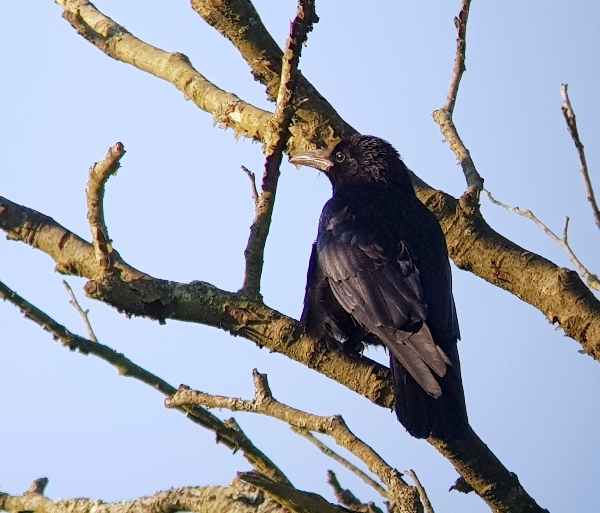 Guy had heard Skylarks on this track this morning but none were singing during our visit. We walked down to the small lake and noted Tufted Duck, Mallard and Little Grebe, some very small Damselflies were flying around but I never found one settled.

back at home several House Martins and half a dozen Swallows were flying around the meadow and two Red-legged Partridges fed on the far side. I made a note to visit Guy's track early one morning just as the sun was rising.