WEATHER: another superb morning for birding, hazy sky, no wind and warmer. Later lots of sunshine and temp up to 23C

Another day, another bird on my isolation list, 80 species here we come!!!  I started with a sighting of a fox, only my second sighting in 56 days. I saw him before he saw me, he was walking along the stream-bed coming towards me and then he went up the bank on my side of the stream. I got my scope off my back and made ready to film him, but he didn't show up in the meadow? I grabbed my scope and walked towards where I had lost him and suddenly he dashed back to the stream from about 10 meters in the meadow, he shot across the stream like a bat out of hell.

The Green Woodpecker called from nearby and I knew that there was a changeover at the nest coming up, I parked myself near the nest tree and waited with scope and phone at the ready. Sure enough the female came in and called again, the male flew out of the nest hole but she didn't see him go, so she waited and then had good look into the hole, backed off and then quickly jumped in. 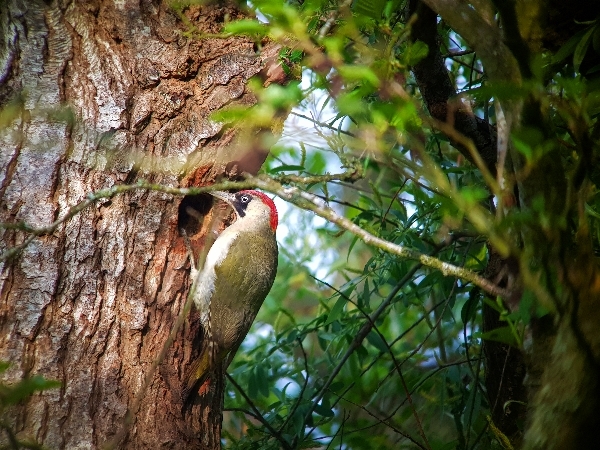 Next I visited the Treecreeper's nest, this one is on my side of the stream in a stump about a 30cm (1 foot) off the ground. A couple of days ago I had looked in and saw 5 white eggs and today I looked again and saw 5 tiny chicks. I backed off quickly and set the scope up ready for a quick video clip. I didn't wait long and got my little video of the adult Treecreeper arriving at the nest hole. 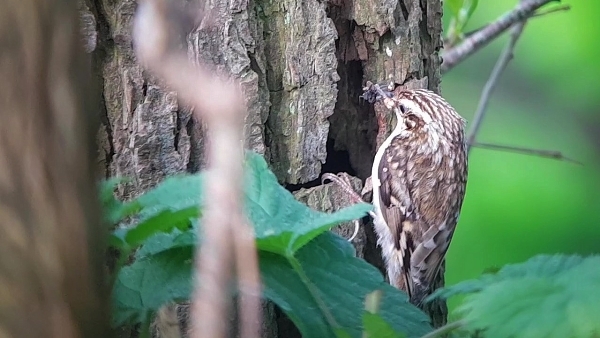 Treecreeper bringing food for ther newly hatched chicks. This is a screenshot from the video

I also waited 30 minutes at the Kingfisher nest site, he flew past me heading downstream very fast, and carried on  past the nest. Ten minutes later he came back and once again he flew past. I got out of there just in case it was me stopping him from going to the nest even though I was 30 meters away.

Nothing much happened as I walked down to the River Yeo, I did scan the distant hedge where David and I saw the Whitethroat yesterday, but nothing was there. 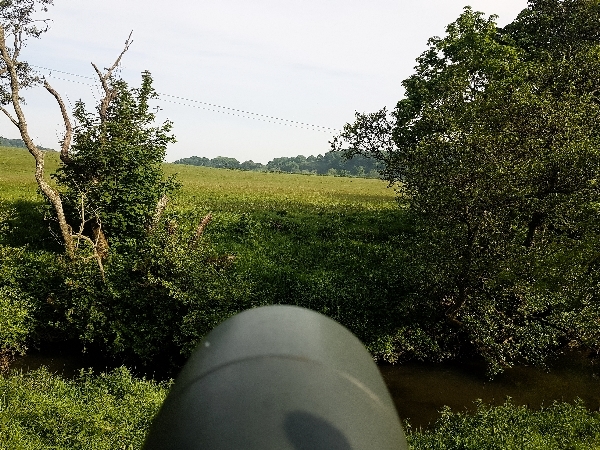 if you expand this picture you can see a small hedge in front of those distant trees, thats where the Whitethroat was

I spent some time trying to photograph Demoiselle Damselflies, there are now many individuals on the wing of two species. I noticed that the variety of the Banded Demoiselle found here has a circular wing mark rather than a band. I thought this extraordinary and contacted a dragonfly expert that I knew and found out that there is a wide range of regional variation in this species, the type I have here is very similar to those found in Denmark and Eastern Europe. 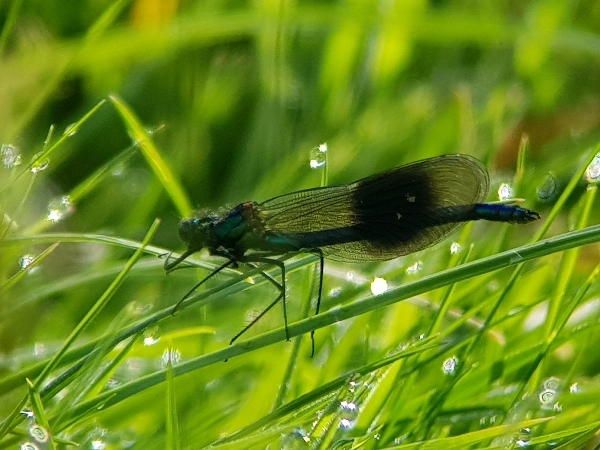 For about 30 minutes I tried to capture on video the strange hovering behaviour of the Long-tailed Tit. On some occasions when an adult leaves the nest after dropping off food for the chicks it hovers above the nest site before flying off to fetch more food. It was almost impossible to get the bird to hover in the correct place and when I wanted it to, this is work in progress.

Then my new species turned up!!!  I was watching two male Blackcaps chasing one another around and occasionally bursting into song (the bird not me!). Then I heard a simialr song coming from the same bush. It went on and on, it was a GARDEN WARBLER, hooray at last. I have been expecting this species for 3 weeks now. Anyway, he kept on singing from the depths of the canopy of a large hawthorne bush and never showed. Then as I was thinking of getting nearer he flew out and shot over the river to the scrub behind the ash trees. Well, that cheered me up! 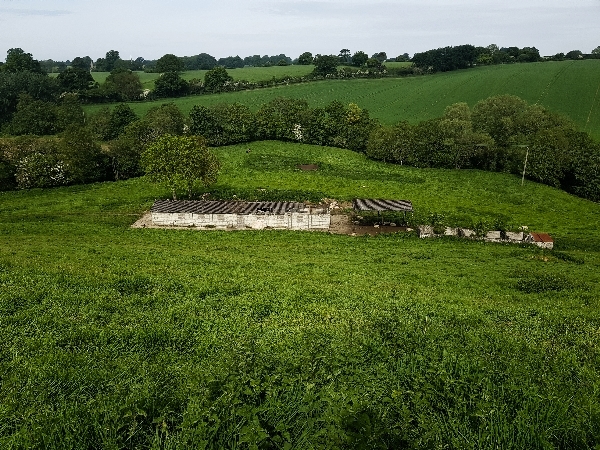 looking down on the delerict building where the Raven was feeding. Incidentally, it has been 3 days now since I saw the grey wagtails bring food to the nest inside this building. So I think they have now fledged.

I walked up and over the hill on the way back, the sun was getting very warm by now. Then I remembered that the brick-layer had told me of a dead lamb near the delerict building, so I diverted and approached the building from above. I saw the carcass and a Raven was feeding there. Off came my scope and out came my phone, just as I was about to capture the bird digitally he looked up and saw me, off he went. I didn't have time to wait for his return.

After lunch Dawn and I had pleasant afternoon sitting in the garden reading our books and watching the world go by.