WEATHER; yet another beautiful day, however the wind did pick up later and thick cloud set in around noon.

I made another change to my regular routine by missing out the walk into Yeo Valley and instead I walked into the country park just outside of Yeovil.

The Cuckoo sounded much closer than it usually was so I walked across to the valley to investigate. However, it was the wind carrying the sound that made it appear to be much nearer, in fact, he was sitting in his usual bush about ½ mile away on the other side of the River Yeo. I tried to video him calling but he was too far away.

Anyway, back to today.  I saw many common species along the way but nothing to write home about, a Green Woodpecker called as I walked a narrow track past Barwick House and as I entered the woodland at Nine Springs many birds were singing. I heard Blackbird, Song Thrush, Blackcap, Chiffchaff, Wren, Robin and Dunnock. 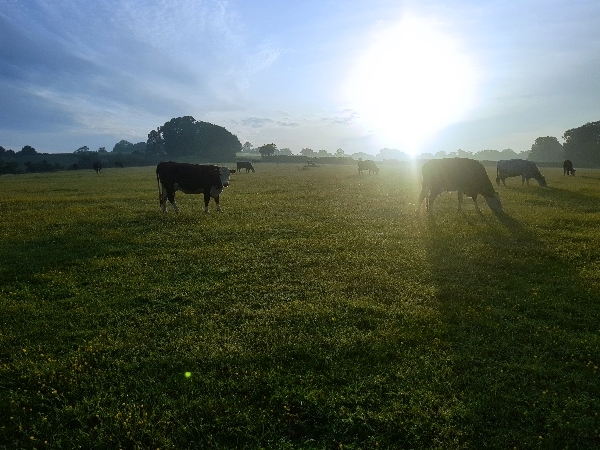 crossing the meadowe above Nine Springs 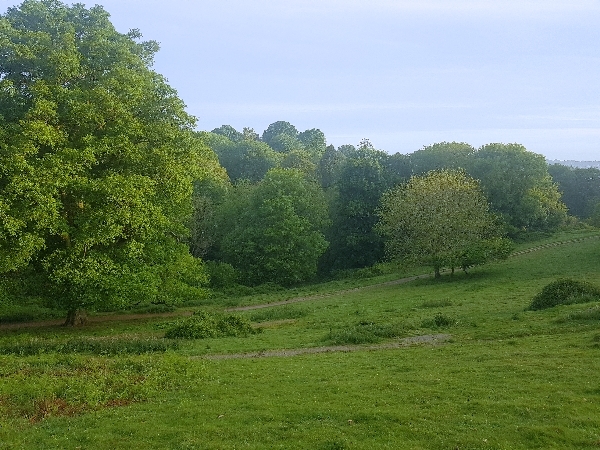 lokking down into Nine Springs Woodland

A series of nine springs bubble up from the ground within the woodland and several artificial pools lead down to a large parkland lake. I positioned myself at the side of one of the man-made pools, I was told on Friday by David Broadly that a pair of Kingfishers had a nest site there and were currently feeding young. 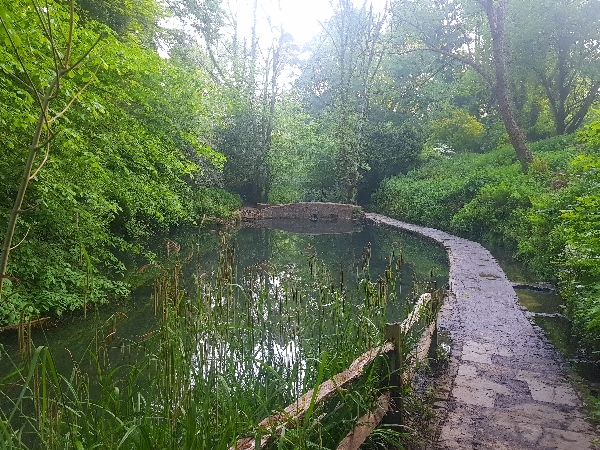 the pool where the Kingfishers were nesting

Sure enough the Kingfishers were coming in on a regular basis but unfortunately they were not perching anywhere that I could get a picture of them. So I focused on the nest hole and tried to get them as they went in or came out of the hole. This didn’t work either, my best efforts are shown below. 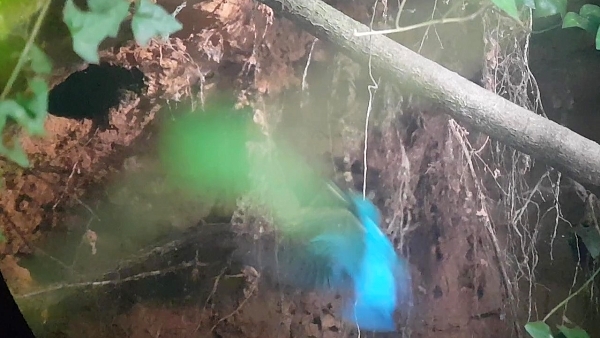 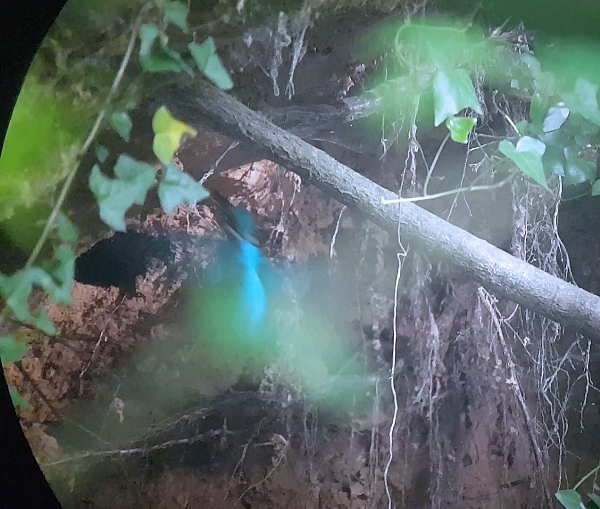 I walked back down into Stoford and realised it was still quite early so I set off up the lane towards Yeo Valley. A Little Egret flushed from below the road-bridge and flew under the railway tunnel and then out of site. I decided to walk the track upstream (south) rather than go into the meadows (north). I couldn’t relocate the Egret so I continued my walk into the large open field that leads to Clifton Maybank. 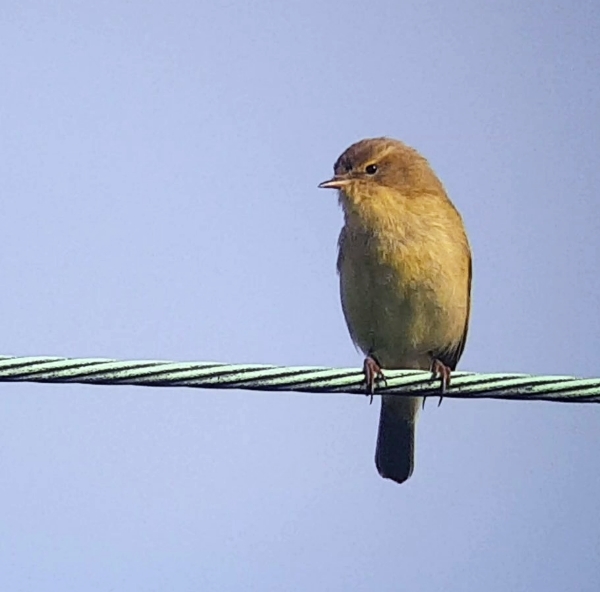 A Chiffchaff on a wire - unusual for a Chiffy 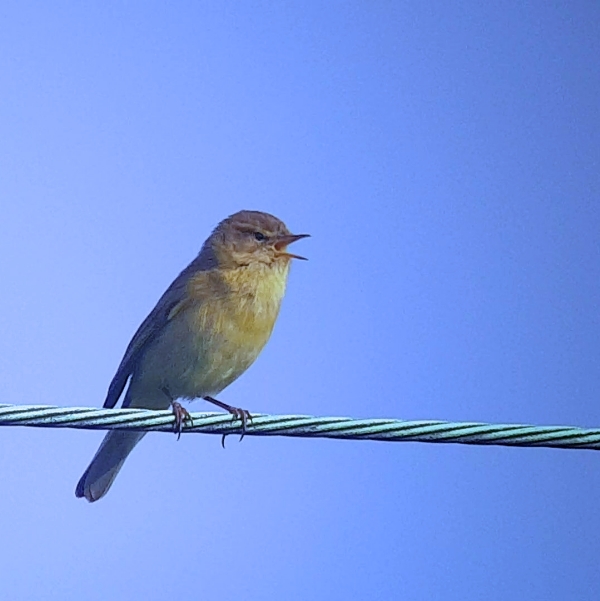 As I followed the path around the edge of the field I saw Great Spotted Woodpecker carrying food, Linnets, Goldfinches and a Chiffchaff was singing from the Telephone wires. I canned the Chiffy and walked on, then a Great Cormorant flew over heading towards Sutton Bingham Reservoir and I heard yet another Common Whitethroat. This one was extremely obliging, singing from the wires and on the tops of bushes. 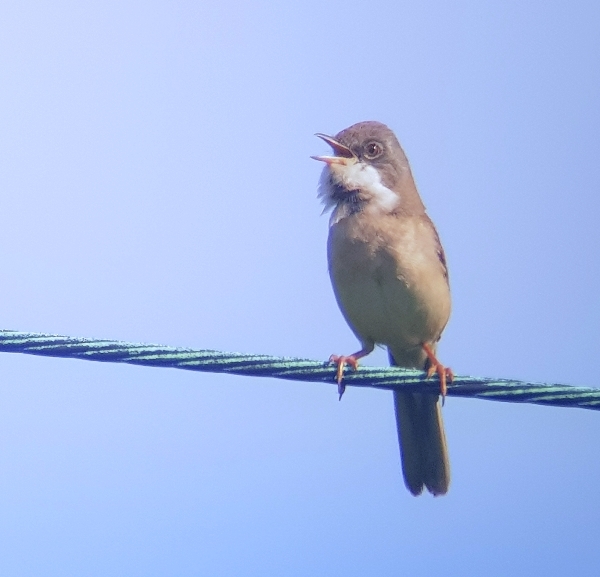 A pair of Common Swifts flew over with a bunch of House Martins and the ever present Barn Swallow. Also interesting was the sighting of at least three Skylarks, the were all singing high in the sky and they came down into the field not too far away, performing their distinctive hover before landing. They landed out of site of course and with the grass so long now its going to be very hard to photograph this species. 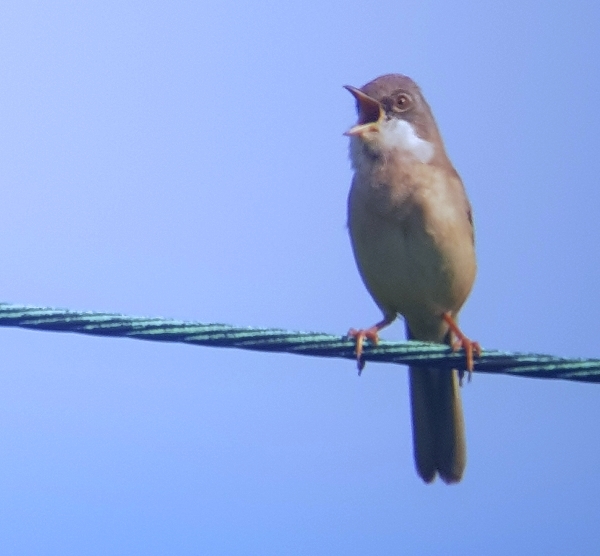 The Common Starlings were still feeding young in the hole in the telegraph pole and I saw another Gt Spotted Woodpecker fly into the trees ahead of me, also carrying food but I couldn’t see the nest hole in the dense foliage. 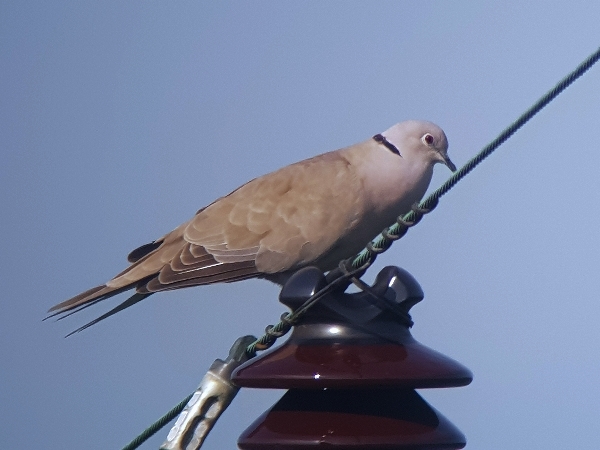 From the garden later I saw LBB and Herring Gulls, Red-legged Partridge, Little Egret and lots of House Martins. What is bugging me greatly is that everyone in the area and surrounding districts are seeing Red Kites fly over their patch except for me, why is that?? Even David Broadly, who happened to be walking the Bradford Abbas to Thornford track today, saw a Red Kite!!