WEATHER: beautiful again, no wind either, just perfect once more

What a fantastic time I had today.........I finally, finally, finally saw a RED KITE and filmed a NIGHTINGALE in full song. it doesn't get much bettter than that! Read on for the full story

I was determined to get a picture of a Skylark and this track had great potential for doing just that. I Drove the 1 1/2 miles  to Bradford Abbas and saw two Bullfinches fly up from the road just after crossing a small road bridge over the River Yeo. I arrived at the track at 7am and began the walk on the wide track that runs due east running parallel to the railway track. A pair of Ravens flew over being chased by a local Crow which has a nest on the nearest pylon. Skylarks were singing away in several directions and so was the local Common Whitethroat. 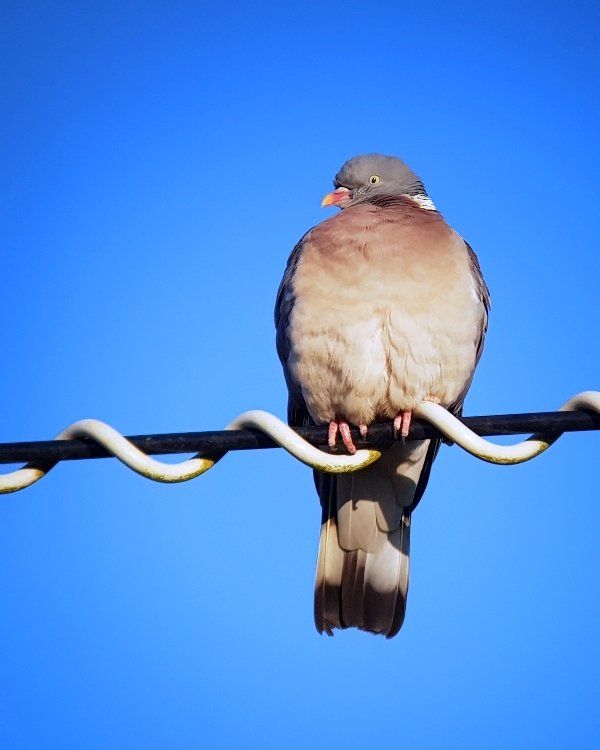 my first posting of a Wood Pigeon

The whitethroat flew up onto the power line just at it did during my last visit and it was joined by a Chiffchaff, both sang out to me. A Wood Pigeon sat on the wire nearby looking bored with it all.

One of the Skylarks flew down into the large ploughed field on my right and I stalked up to towards it. I thought my pictures were not too bad but better was to come later. I walked past the first farm where building work is going on and a few Barn Swallows sat on the scaffolding and I should have got some amazing pictures but I didn't, I don't why all pictures were blurred? 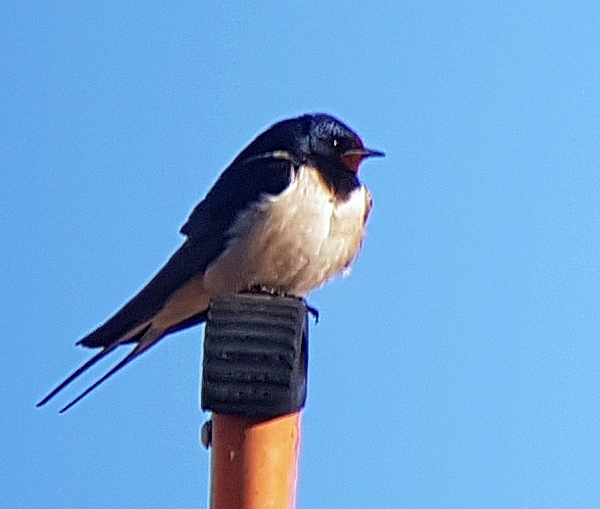 I wasn't deterred so I carried on towards Sherborne passing through a couple more ploughed fields, it looks as though maize has been planted there. then I walked besides a field of Rape and another crop field. All the time I was hearing Skylarks, Common Whitethroats and Yellowhammers. 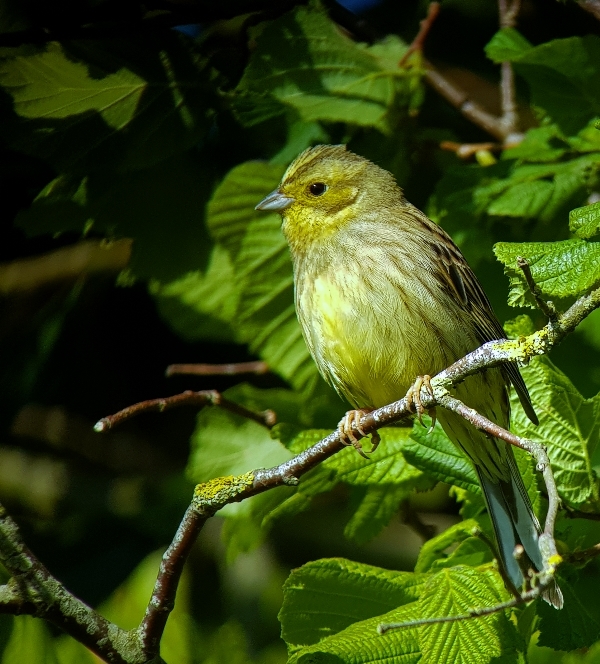 Yellowhammers - the female above and the male below 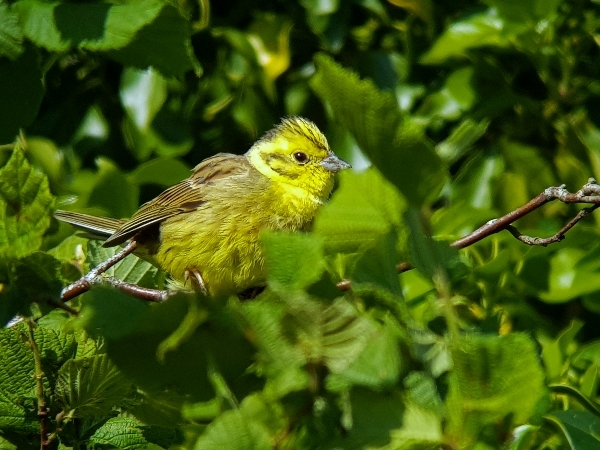 I got great pictures of a pair of Yellowhammers and then I found a pair of Skylarks very close to the path in a wheat field. The male was displaying, by dancing around and singing, the female just looked bored. But I took over fifty pictures of them. 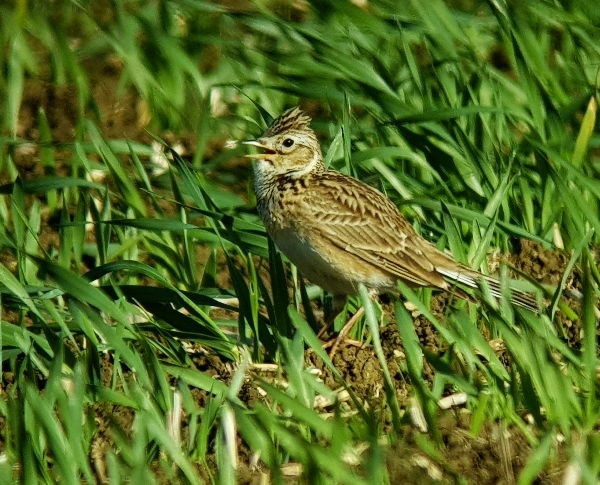 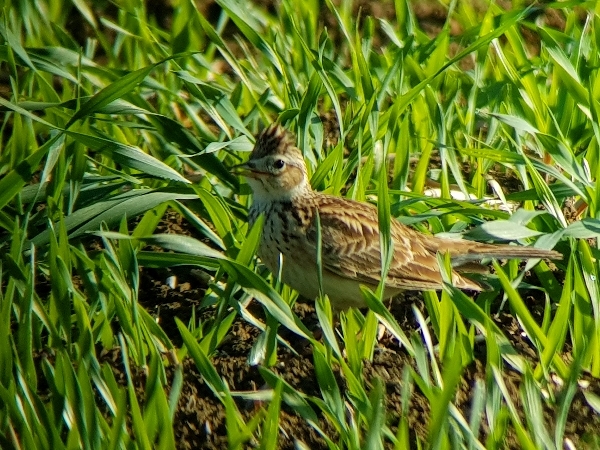 the male with his crest errected, his wings drooped down and his tail cocked - but......... 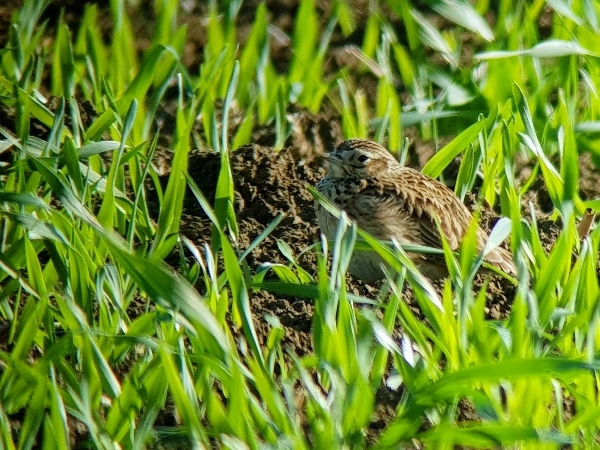 I walked a little further onto Sherborne Common and almost to the edge of town before I turned around and headed back. My sightings included Linnets, Goldfinches, Blackcaps and all the common gardens birds. When I reached the final field I noticed a Buzzard being mobbed by a Crow. there are two Crow's nests on adjacent pylons and they fly up to anything that looks threatening and mob them. 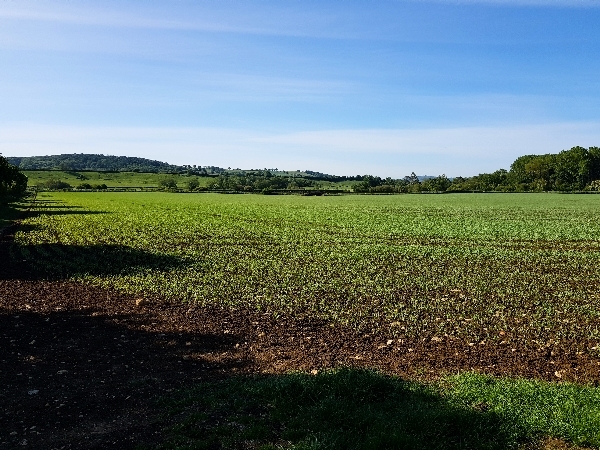 Whilst I was watching the Buzzard and the Crow i saw two more Buzzards a little higher up and further away, they were joined by a RED KITE. I tried to phonescope them, the results are poor but you can see what they are. 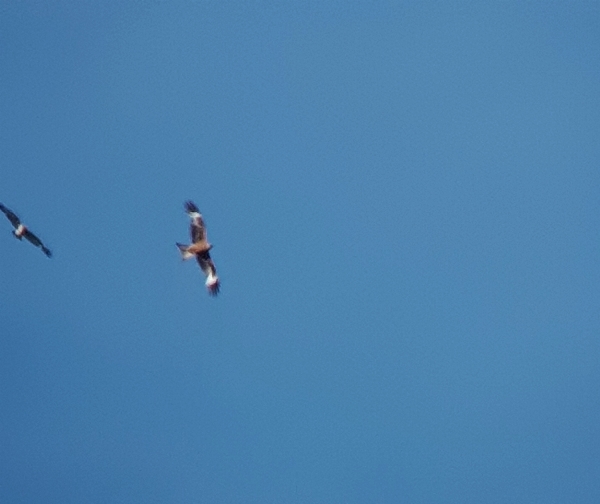 the Red Kite and the Buzzard 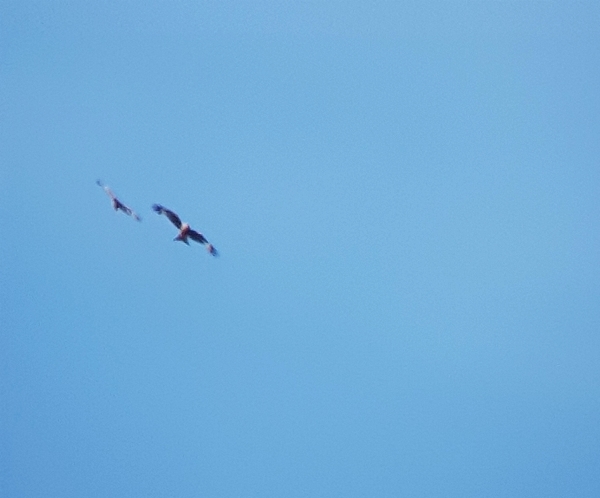 I got home at 10am. I had been out walking for 3 hours, I had covered 5 miles and I needed a coffee. I then went for a 1 1/2 mile power walk whilst Dawn ran it. We then spent 25 minutes doing floor exercises, I was done in by lunch time and so I took the traditional 30 minute nap after lunch. 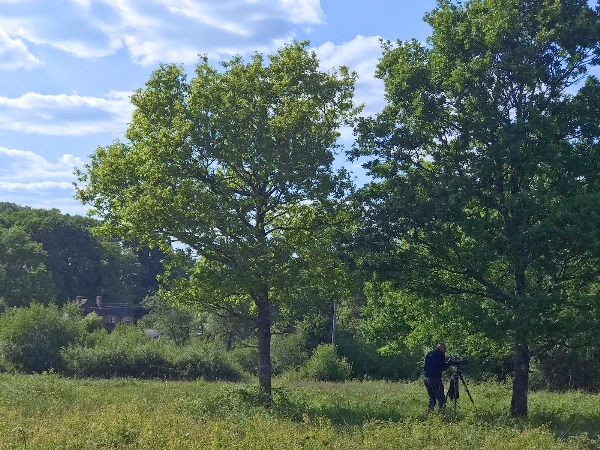 At 3;45 we set off in the car and drove for 20 minutes to a very quiet butterfly reserve just over the border in Dorset, called Lydlinch Common. Not only is this place maintained for butterflies but also for scrub birds including the Nightingale. We heard several Garden Warblers, Blackcaps and Chiffchaffs and then the unmistakeable Common Nightingale burst into song.

A quick search produced a great sighting of this masterful musician, he sat out at the top of a shrub and gave it his all. Click, click and whirl. whirl (tha's me filming it). 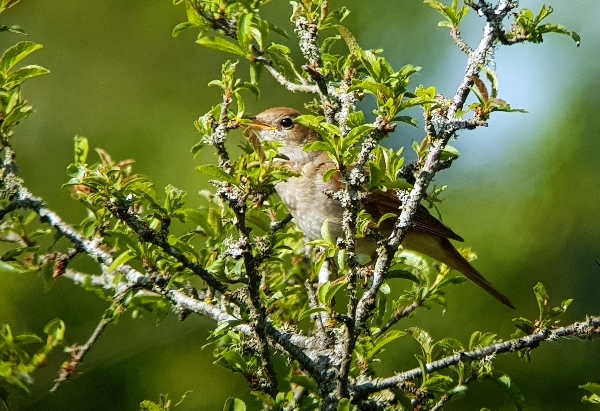 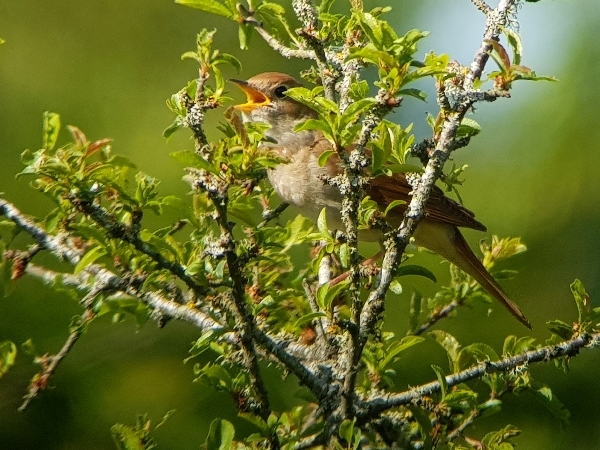 We also found a number of interesting flowers and a Marsh Fritillary Butterfly. 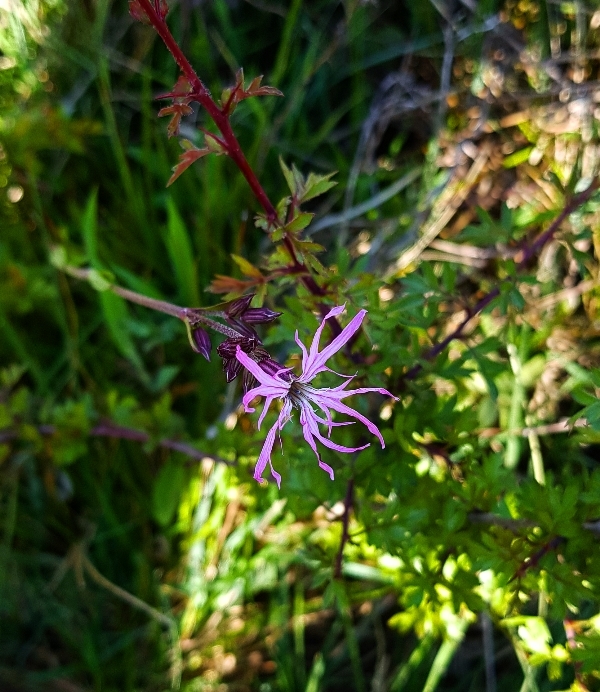 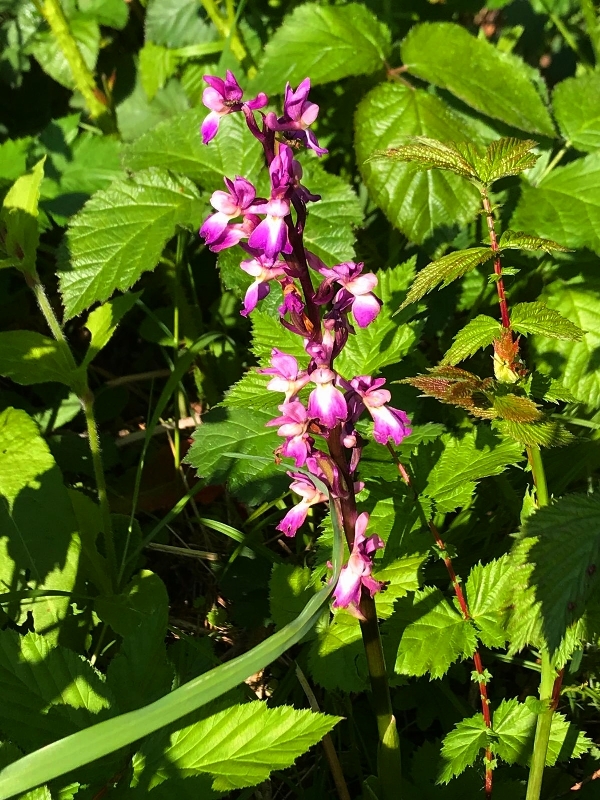 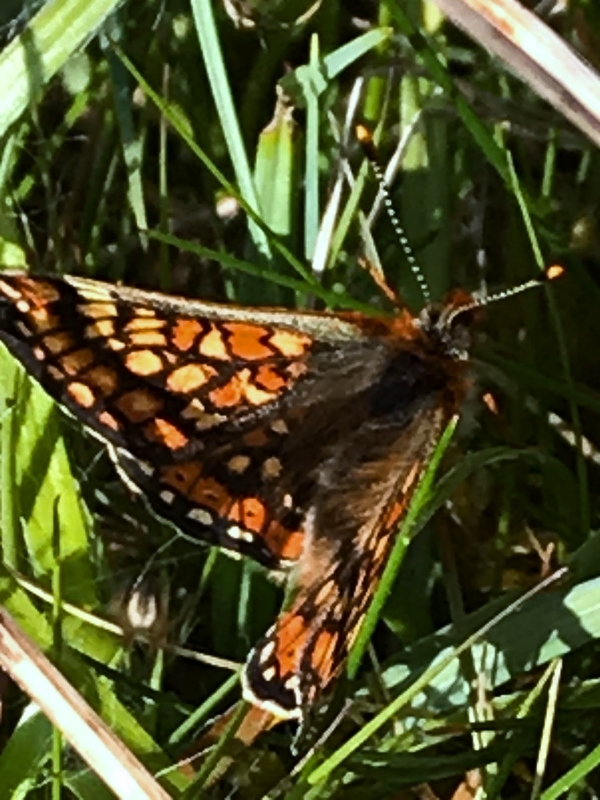 Dawn found a little collection of owl-pellets, they looked like the product of a  Long-eared Owl to me. We set off for home at 5:45, it had been a long day, but oh so enjoyable.