I saw that the weather was looking quite bad from my living room window,  It was very dull almost dark at 6am, so I took my time getting ready. It was quite windy too but once I was by the stream I was sheltered by the trees.

My first stop was at the Nuthatch nest site, I waited for 10 minutes and a bird appeared at the nest carrying food, at last, now I had proof that they had actually bred. 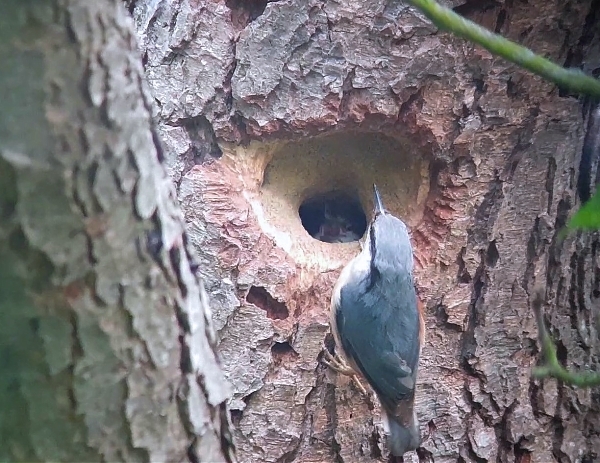 Over the next 20 minutes the bird returned with food 3 more times and I filmed each visit. It soon became apparent that there was only one bird being fed and I sensed that perhaps the parent bird was trying to encourage the chick to leave the nest hole because on a couple of occasions the adult stood outside holding the food in its bill trying to entice the chick to come out. 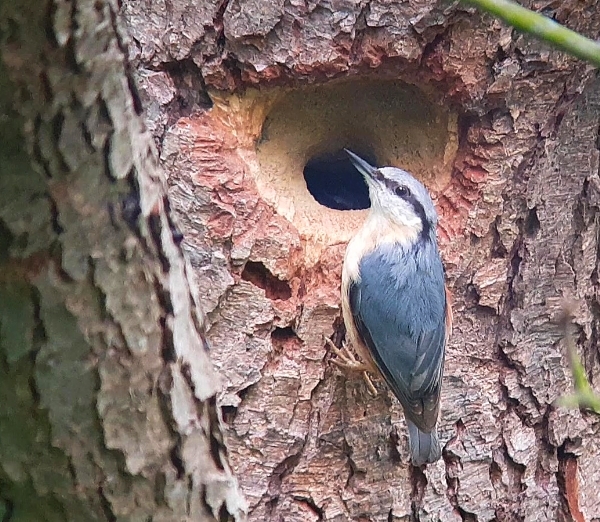 Well, eventually the chick did come out, it took a short walk around the tree and went straight back in. I am assuming that this is the last chick to fledge and all the others have flown the nest.

The Green Woodpecker nest remained quiet, I didn’t wait long enough to see any activity because I was anxious to get round to the Kingfisher nest site. Today I had brought my full-length waterproof cape, I wanted to use it as a hide but as you will see I never needed it. Just as I settled down and set the scope up, the Kingfisher arrived! He (I knew was the male from the colour of the lower mandible, male’s are all black) sat below the nest and he was carrying a fish!! I very quickly put my phone to the scope and fired off a number of pictures, he then flew off. 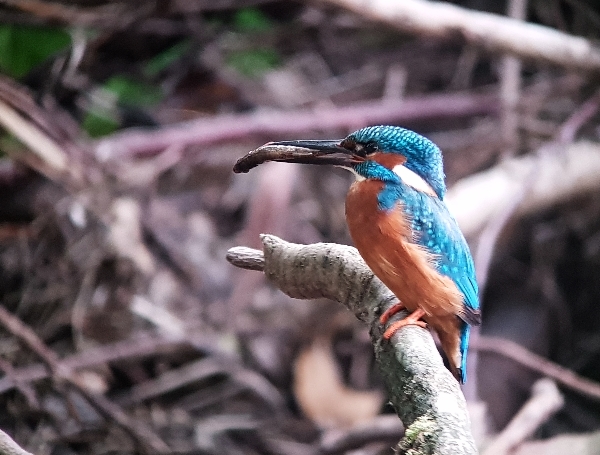 Common Kingfisher at long last I have him on my blog!!!! 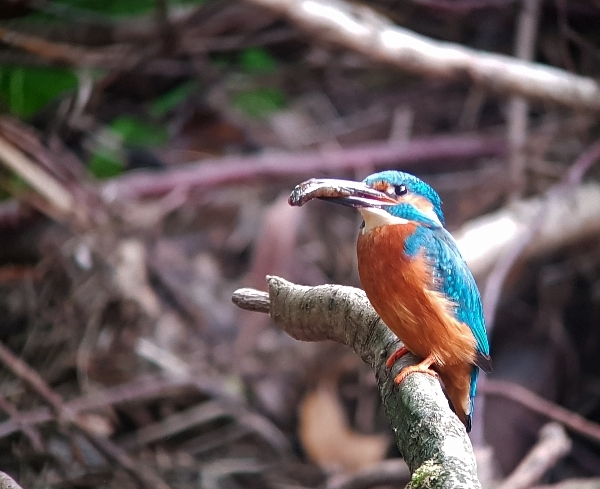 At long last after nearly 60 visits to this nest site I finally have a picture of the elusive little bugger! I can think of so many times when he taunted me, by appearing for a brief moment and then zooming away before I even moved. I had him in the ‘can’ at last, our relationship has totally changed, I don’t care anymore if he zooms away when I blink, however my ultimate aim is to photograph the fledged chicks sitting on the perch that I provided.

I covered myself with the cape and waited for another 15 minutes and he never came back, so I left them alone, I might have been disturbing them. I walked away with a spring in my step and with the weather improving by the minute I was optimistic, high as kite actually. 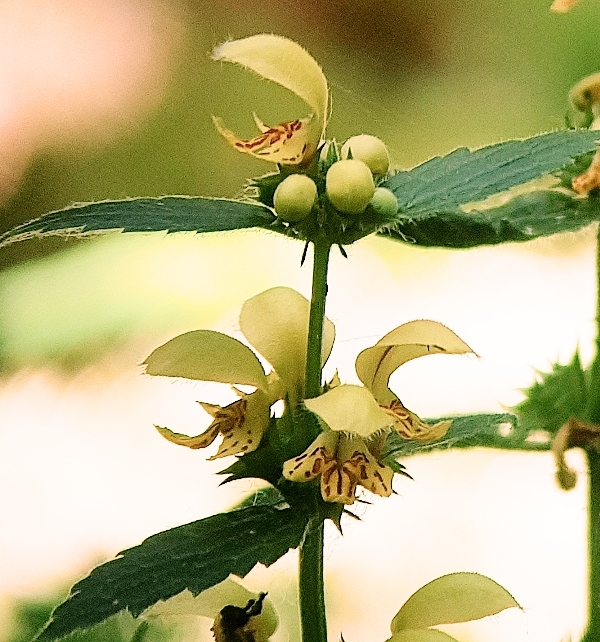 My next piece of excitement was the sighting of a Mandarin, it was a female and she had 8 chicks swimming in a line behind her, what a beautiful sight. They were too close to fit in a single frame so I backed off and walked quickly ahead of them, hoping for a wider field of view. It never happened and once again the welfare of the bird comes first so I did not pursue them. But what a nice surprise, I was hoping that these Chinese interlopers were going to breed here.

The excitement continued as I followed the River Yeo into the little side valley, a Cuckoo called from very close by, it was actually on my patch. Then even better I heard the bubbling call of the female Cuckoo and she was even closer. I went for her and before you knew it she was in the ‘can’ too! Fantastic!!  I expected the male to fly into the same tree as she was sitting but he wasn’t interested for some reason. He has been calling for nearly six weeks and finally a mate turns up and he doesn’t show an interest?? Obviously, they both knew something I didn’t! 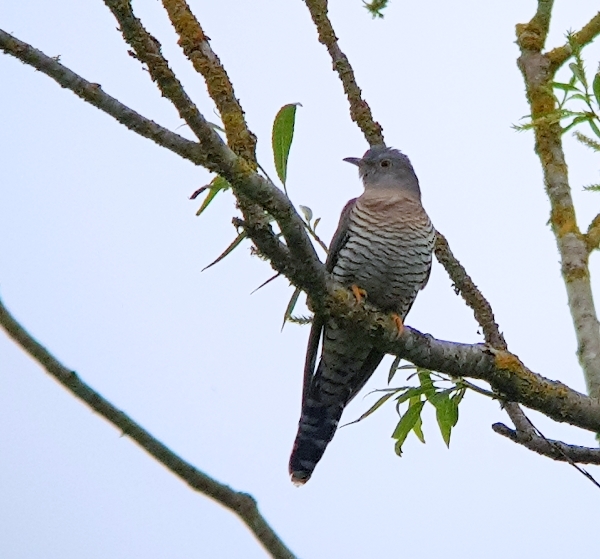 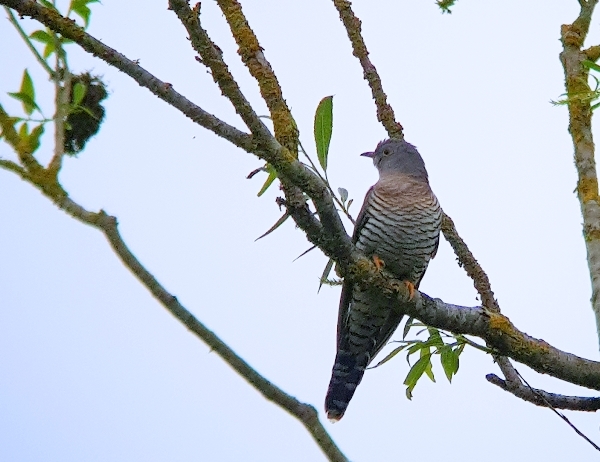 Well, I was made up after that, it is so good to get back on patch after gallivanting all around the area looking for pastures new and other species for my list. I get much more enjoyment from my local patch birds than the rare visitors down the road. My feeling of euphoria was amplified with my next sighting. It was of a Common Chiffchaff, I know they are just plain non-descript warblers, but seeing one carrying food took me back to my early teenage life.

I can remember watching one carrying nesting material when I was about 14, I stood stock still until the bird finally flew down into the grass and revealed where it had built a nest. I was totally gob-smacked, how come a canopy bird builds its nest on the ground?? It didn’t seem right. Subsequently I learned that Willow Warblers and Wood Warblers do the same and much later I found out Corn Bunting do too, I already knew that Skylarks, Woodlarks and Lapwings did the same.

Anyway back to the Chiffchaff, yes it flew down into the grass but failed to pose for the camera, I left it alone and went on my way.

There was a lot of activity in the air today, I saw two Grey Herons, a Little Egret, several Common Swifts, a couple of Common Buzzards, Herring Gulls, the usual Ravens, Crows, Rooks and Jackdaws.

Look away now if you are eating your breakfast whilst reading this!!! 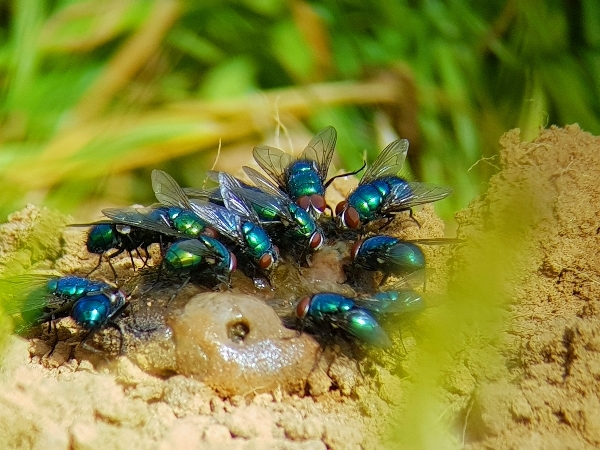 These are Greenbottle Flies, they are feeding on sheep sh-t - I thought they looked rather beautiful, what do you think?  - Dawn says I'm wierd and crazy!!

Dawn and I stayed in the flat for the rest of the day doing little chores and rearranging furniture. About 3pm a Cuckoo started calling from the trees very close to the flat, I dashed out but could not see it even though it was only 50 meters away. It was still very windy and the direction of the call was difficult to pin-point. He went further away and a little later came back again, I left him alone having being well satisfied with my Cuckoo experience earlier on.