WEATHER; sunshine for most of the day, some cloud. Temp 18C

We were on the butterfly trail again, this time we went after our last Fritillary Species (having missed the Glanville Fritillary), today we were after the HIGH BROWN FRITILLARY and although this is one of the most widespread fritillary butterflies in Europe it has very restricted distribution in the UK. Just small pockets are found, our nearest site is in North Devon.

Guy picked me up at 8am and within an hour we were in North Devon and forty minutes later we were on site, we found the designated area quite easily but finding the location of the butterflies was another story. 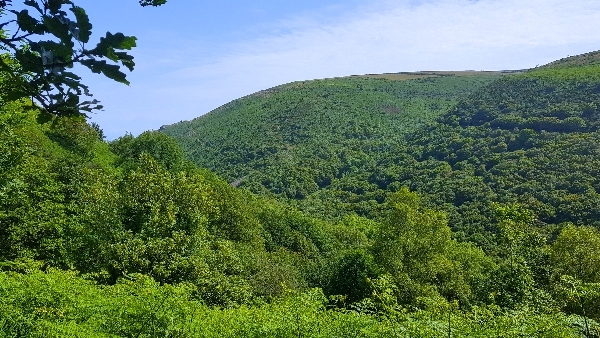 It wasn’t easy walking either, let me take you there…………….

From the main A39 road near Lynton we turned onto a tiny, very narrow lane, with few passing places, this lane took us through very beautiful woodland, hedgerows ablaze with pretty flowers and a babbling brook that ran alongside the lane, it was stunning. After 3 miles we came to a large NT (National Trust) car park where the famous Hunter’s Lodge Hotel could be seen, so far so good, we were in the right starting place. 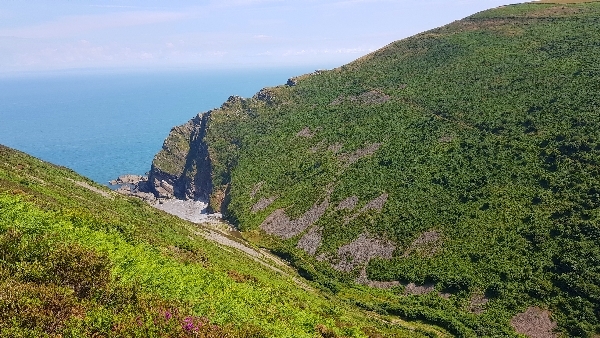 A short walk down the lane past the hotel and we found the track which we followed through a wood. From a bridge and a couple of view-points I had two sightings of a Dipper and Guy didn’t! We heard Blackcap, Song Thrush, Wren and we saw a Mistle Thrush. 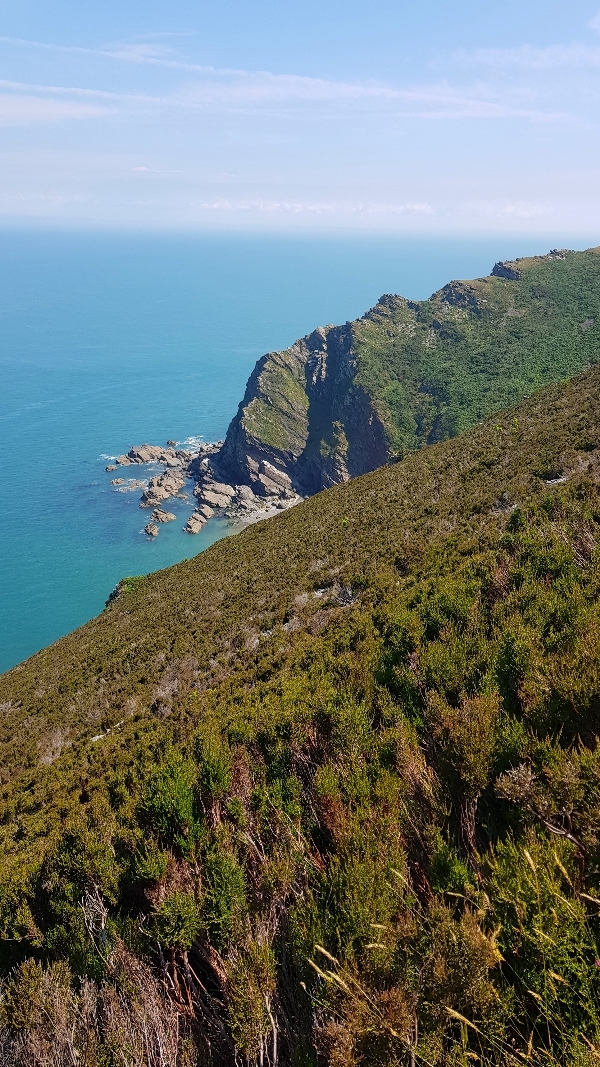 Heddon's Mouth from the cliffs at  Peter Rock

On some brambles we found a couple of Silver-washed Fritillary, lots of Meadow Browns and a few ‘Whites’. The track then turned and rose steeply up through the wooded area, it rose and rose and rose. We came out into the open some 200 meters higher up, the scenery was stunning we had views down to Heddon’s Mouth and the coastal cliffs. We were shattered but the habitat looked good, bracken, clumps of bramble, fox-gloves and some flowering thistle. 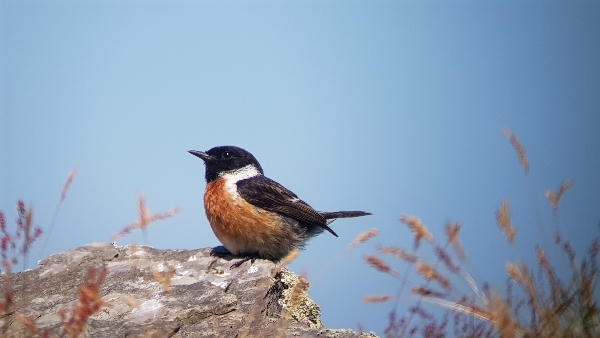 not a Rock Pipit but a Stonechat

The path continued to climb as we headed to the coastal cliffs (I was inclined to give Guy a little push – but he had the car keys), we saw Linnets, Stonechats and we heard a Tree Pipit. Then….. we had several sightings of fritillary butterflies and they were not Silver-washed!!

The trouble with the High Brown Fritillary is that it flies with an almost identical beast called the DARK GREEN FRITILLARY! They fly in the same time period, they look almost identical, they are found together and because of the bright sunshine they were extremely active. So we never had an 'Scooby-Doo' of what we were looking at! 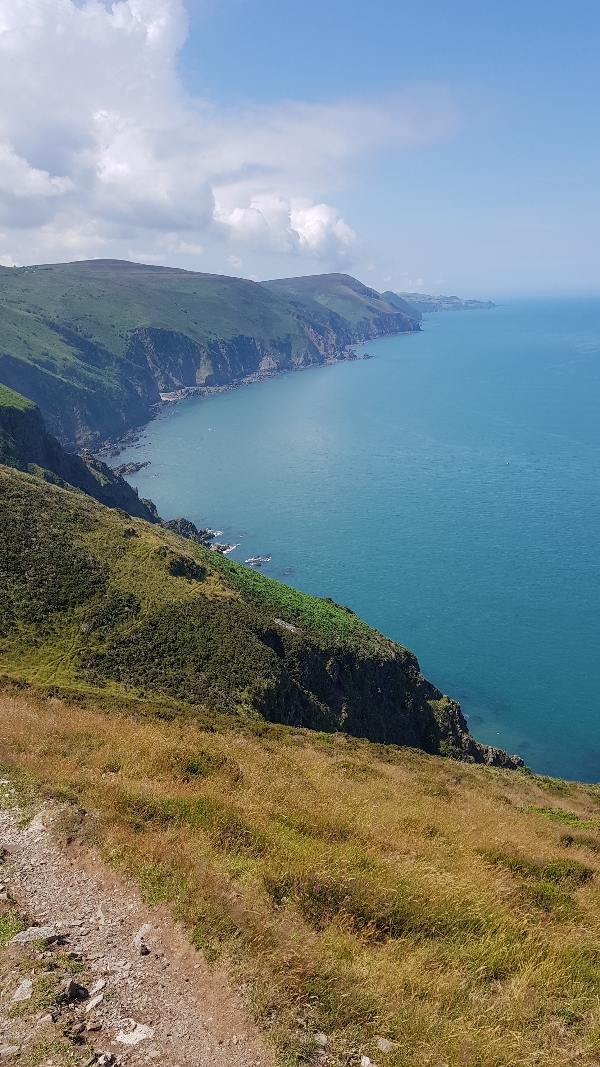 we are on the coastal path now at East Cleave, 2 miles from where we should have been, but it was worth it!

We had a few sightings, mostly as they dashed past us, a couple settled for a nano-second, we had no chance of identifying them and we were still in the wrong place! We walked a further mile or two, round a headland and back inland,  I must say that the scenery was stunning, absolutely beautiful. We saw a few Herring Gulls, a Fulmar and a few dozen Auks, mainly Razorbills with a few Guillemots.

look carefully and you will see some Auks, namely - Razorbills and Guillemots

As we descended we soon realised that we were now in the correct habitat as we started seeing the fast flying Frits once again. We bumped into a couple of other people looking for the High Brown but they didn’t leave us with any encouragement. We found Small Copper, Ringlet, Green Hairstreak, Small Tortoiseshell, Red Admiral, Small Heath and millions of Meadow Browns. We also saw a newly fledged Common Redstart, a Willow Warbler, a family party of Common Whitethroats and a good number of Golden-ringed Dragonflies. 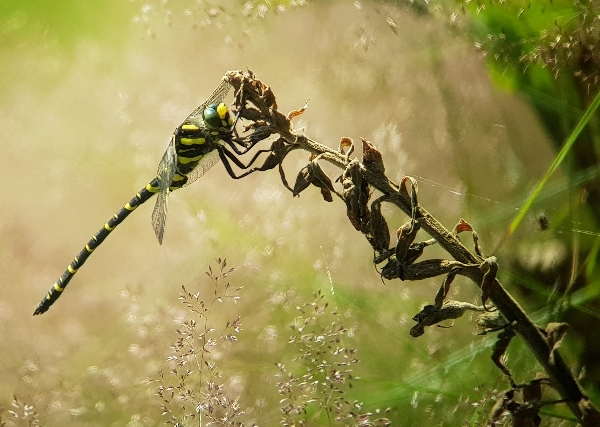 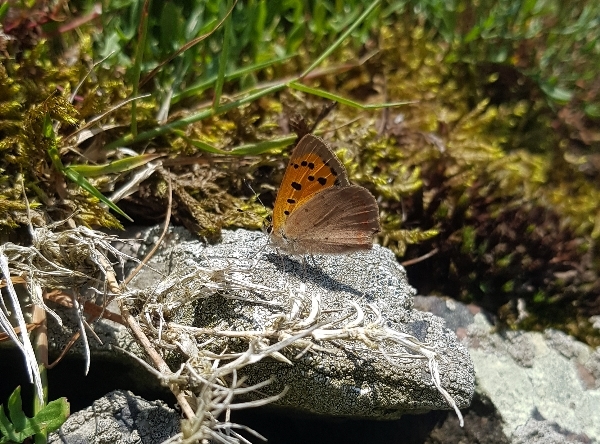 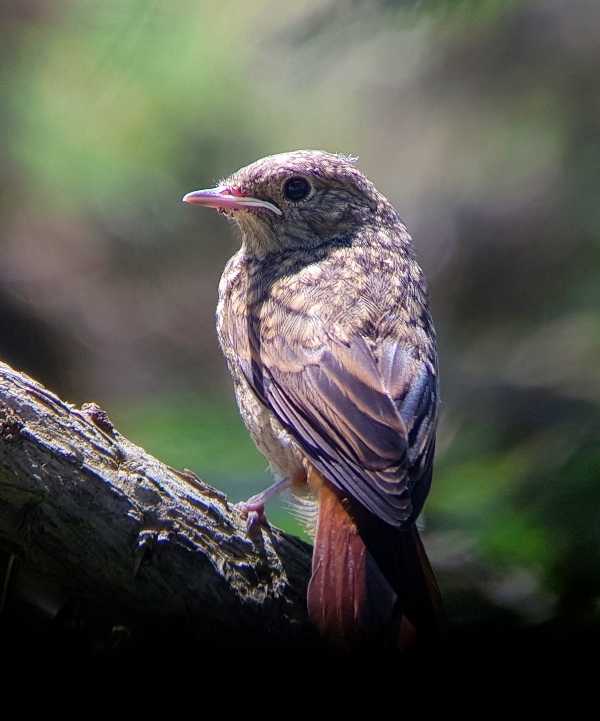 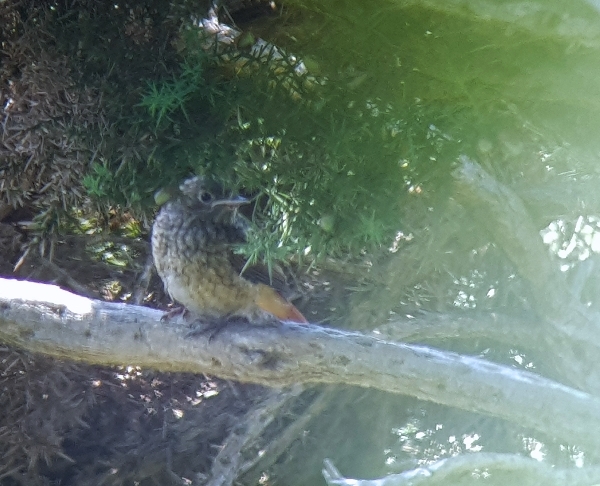 It was approaching 1pm by now and we were getting hungry so we decided to walk back down to the car park, the path we were on was a circular walk so we ended up on the same lane as we had started. Towards the end of the walk we bumped into a guy who standing in the bracken with a camera poised. He was watching the HIGH BROWN, he told us this was best place for them, we were only 200 meters from where we started this morning, I could have strangled Guy but at that moment a Fritillary landed not too far away, I scoped it and yes indeed it was a HIGH BROWN FRITILLARY, that butterfly saved Guy’s life! 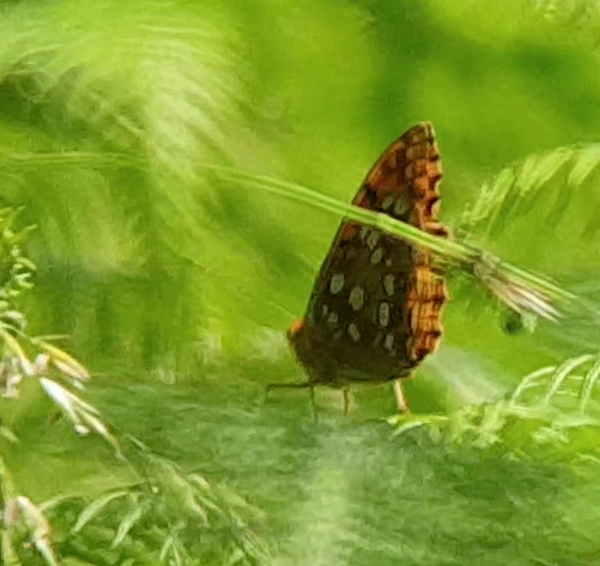 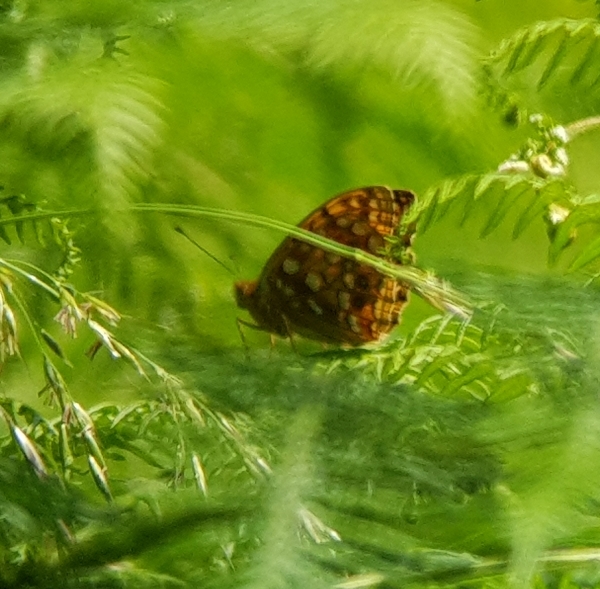 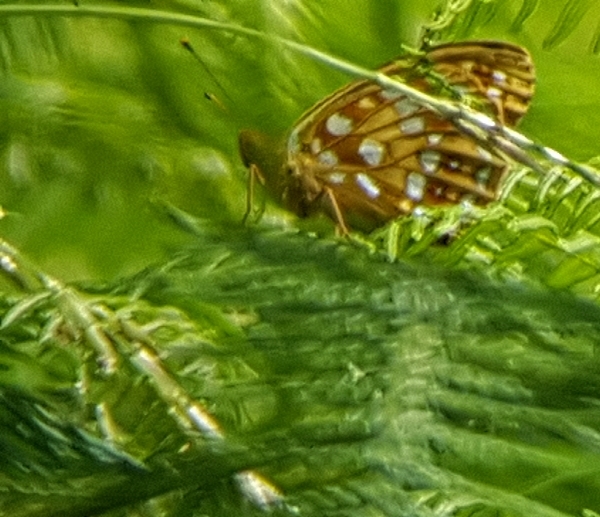 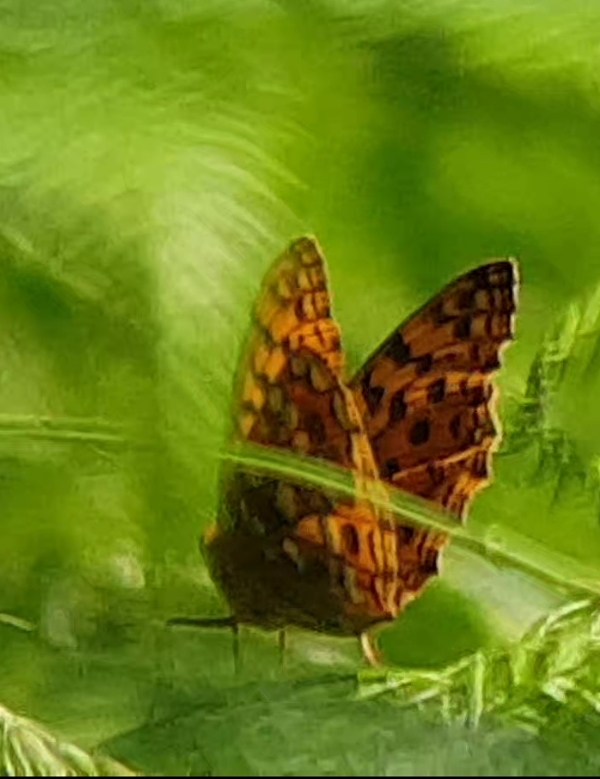 We took some pictures, record shots, before walking down the hill to the car park for lunch. The guy with the camera told us of a place in the valley where the High Browns visit some buddleia flowers, so we checked that out after lunch. We saw Silver-washed and Dark Green Fritillary but not the High Brown. It was getting late now, 4pm, and we had a near 2 hour drive home, so we left. 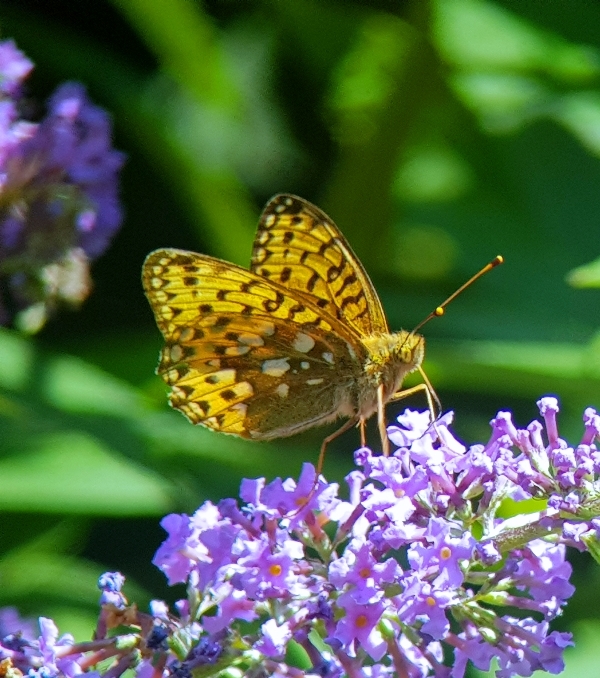 I got home around 6pm and was totally shattered, but the High Brown was in the bag, our last Fritillary for the year.