WEATHER: HOT AND SUNNY ALL DAY. TOP TEMP. 31C. An Easterly wind made it feel like 25C.

We arrived in Tarifa around 9am in preparation for our Whale Watching Cruise which was due to set off at 12 noon. So with time to spare we visited the huge sandy beach called Playa Los Lances. We began our listing with two species of Starling,  both Common and Spotless formed mixed flocks as they foraged on the edge of town near the beach, Next we 'scoped a huge flock of roosting gulls that were sat way out on the sand, there was Lesser Black-backed, Yellow-legged and Audouin's Gulls with groups of Sanderling running around them. Several individual Herons and a couple of Little Egrets stood in pools fishing and we also saw a single Common Sandpiper, several Kentish Plover and not much else. 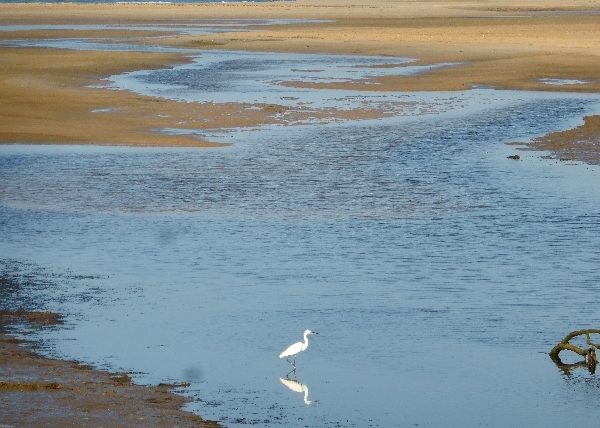 A view of part of Los Lances beach, Tarifa - Little Egret in the foreground

Good numbers of Cory's Shearwaters were feeding just off-shore with hundreds of gulls but because of so much human disturbance the beach itself was very quiet so we concentrated our efforts on the grass meadows behind the beach. Flocks of Linnets and Goldfinches seemed to be everywhere, Crested Larks, Zitting Cisticolas and Corn Buntings were common too. We saw our first migrant Northern Wheatears and many Cattle Egrets fed near horses and cattle in the paddocks. There was no visible raptor passage, we hardly saw a bird of prey just Eurasian Sparrowhawk and Common Kestrel, this was due to the easterly winds, birds will not risk crossing over to Africa in an easterly wind. 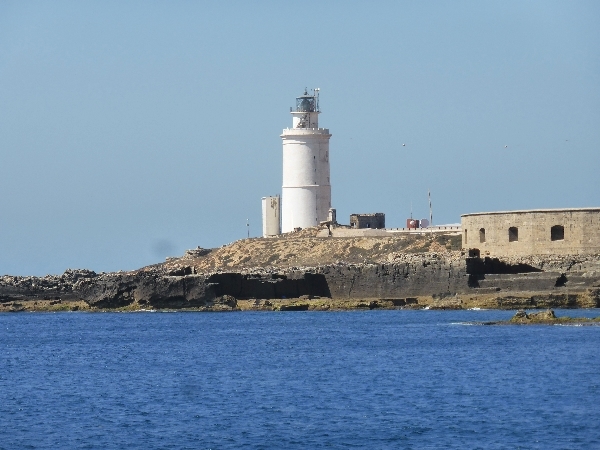 The Lighthouse on Tarifa Island

We arrived in good time to board our boat which was packed with 162 other tourists many of whom remained in their seats for the entire trip because it was a little choppy and a chilling wind prevailed. Overall the trip was a little disappointing as far as sightings were concerned, there were long periods of 'nothing to see' but what we did see was exciting.

A dozen or so of Cory's Shearwaters came close enough to give good views, a distant Northern Gannet flew by and a flock of two Sand Martins flew past us. Sunfish were seen swimming both on the surface and below it then our first exciting sighting came as we saw a 'blow' ahead of us. It turned out to be a Sperm Whale which show reasonble well before it raised its tail and dived for deep water. That sighting was quickly was followed by sightings of Pilot Whales, we followed many of these beasts over the next hour. 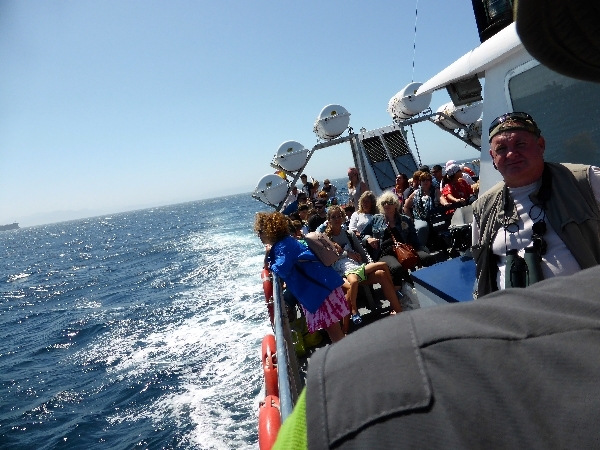 a reverse shot, taken over my shoulder, Pete is in the foreground and Chris is seated in the background 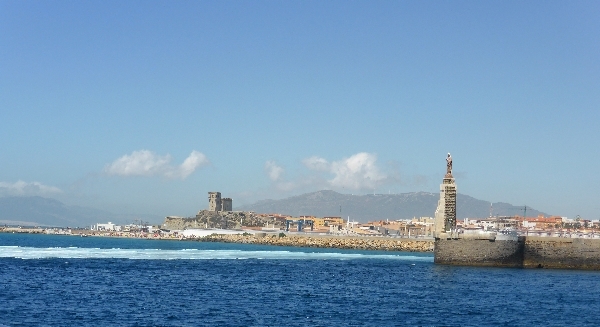 Bird sightings we few and far between, a flock of 22 Eurasian Spoonbills flew over in a 'V' formation, a couple of Sandwich Terns sped by and Cory's Shearwaters were ever present in small numbers. One very nice surprise was a flock of European Storm Petrels, the boat 'flushed' them from the water's surface and only a few of us standing in the bow saw them, that was the highlight for me. I was very surprised by the lack of Dolphin sightings too, there are usually dozens of then, we saw a single Striped Dolphin as we headed back and that was it.

Back at the car by 3pm we set off for a quick visit to La Janda which was a 20 minute drive away. We ate our picnic lunch standing around the car on the central track in La Janda. We had commanding views of the surrounding rice fields and pastures which were teaming with bird life. Hundreds of White Storks sat in large groups on the raised banks around the rice fields as did Cattle Egrets, Little Egrets, Grey Herons and Glossy Ibis whilst many Montagu's and Marsh Harriers hunted low over this flat terrain. 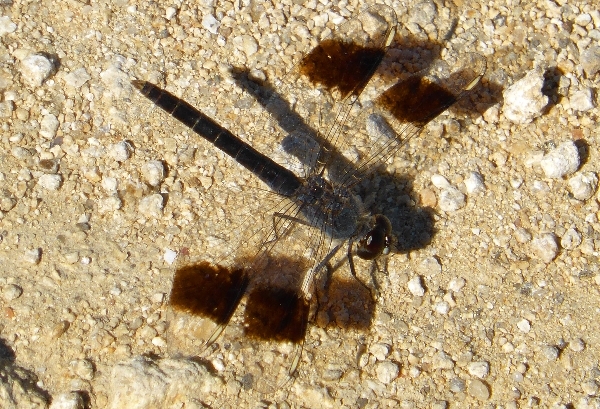 The Banded Groundling dragonfly - male.  Dozens of  these were seen along the central track at La Janda

In the ditches we found Common and Green Sandpipers and one area of open water held hundreds of birds, we listed 20 species. Collared Pratincoles (3) were nice to see along with a good selection of waders which included; Ruff, Black-tailed Godwit, Common Snipe, Wood, Green and Common Sandpipers, Black-winged Stilt, Greater Ringed Plover and also a single Greater Flamingo, Northern Shoveler and a few Mallards fed in the water.

On the other side of the main track huge fields of sunflowers were seeding and were ready for harvest, this encouraged some of the biggest flocks of finches you are ever likely to see in this part of the world. There were thousands of Goldfinches, Linnets, Greenfinches, Corn Buntings, House & Spanish Sparrows and a huge 'plague' of Wood Pigeons. We also noted both Common and Lesser Kestrel and one or two Short-toed Eagles in the same area.

It was now getting late so at 5pm we drove to a copse of White Poplar trees where you can normally find roosting Red-necked Nightjars, we were lucky enough to see two of them, a lifer for Bill! We then set off for home which was some two hours away, arriving at 7:30pm it had be a long but very enjoyable day. 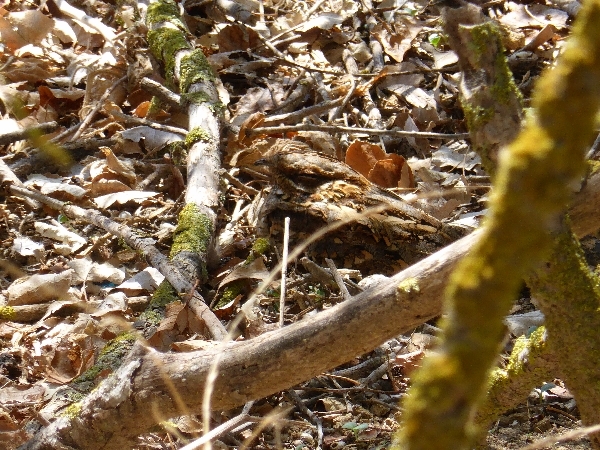 A Red-necked Nightjar nice camouflaged in the leaf litter 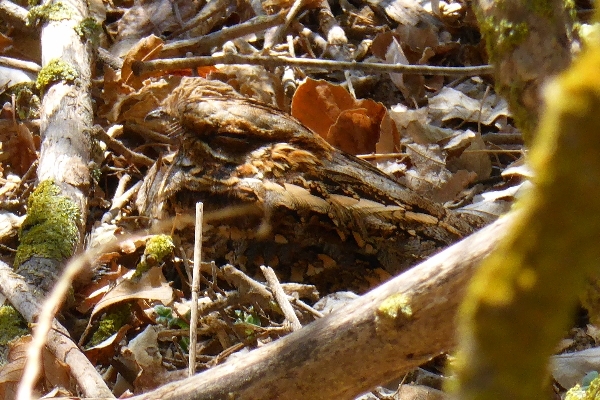