WEATHER; CLOUDY UNTIL 10AM THEN ALL DAY SUNSHINE, TOP TEMP 33C. Easterly winds at Tarifa

An early start saw us arrive at El Algarrobo at 9am having driven from Gaucin and passing through Algerciras with no traffic problems. We noted White Storks along the way standing on their nests at San Roque.

It was cloudy at first and no visible migration was taking place but over the next hour or so we noted 121 Honey Buzzards, 12 Black Kites, 14 Sparrowhawks (yes they migrate to Africa too!), 3 Marsh Harriers, 5 Booted Eagles, 2 Short-toed Eagles and 3 Griffon Vultures. It could have been better but low cloud and a strong easterly wind prevented a good 'passage'.  We also noted Alpine Swift, Barn Swallow, House Martin and not much else. 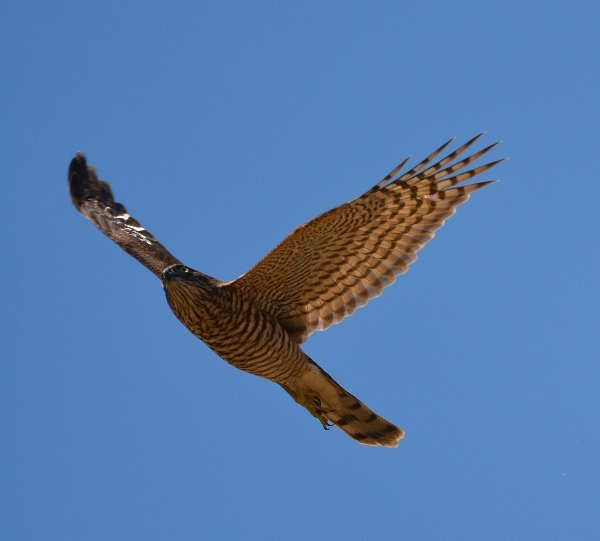 We then drove up to Cazalla watch point and used the buildings there to shelter from the wind, we made fewer sightings there but they consisted of Egyptian Vultures, Black Kites, a few very close Honey Buzzards, Booted Eagles and Short- toed Eagles, all in small numbers. After less than an hour we decided to drive diwn to Los Lances Beach and visit the hide there which turned out to be a much better idea. 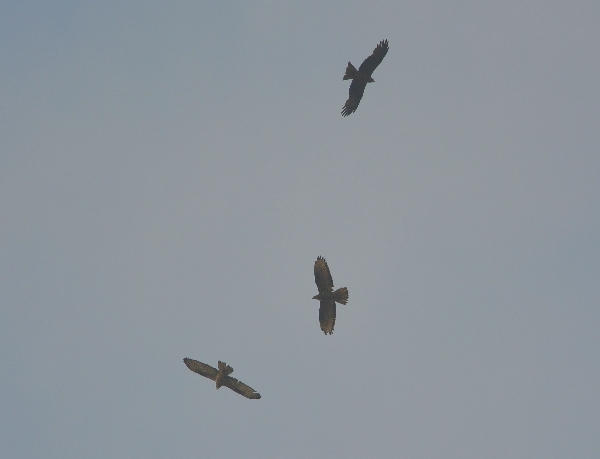 We were now out of the strong wind, the cloud cover was gone and the sky was full of raptors, hundreds of them, they were quite high up and seemed to be drifting into the wind eastward with no intention of crossing the water. The majority of the birds were Black Kites but mixed flocks included Honey Buzzards, Egyptian Vultures, Booted and Short-toed Eagles, it was a fantastic sight. 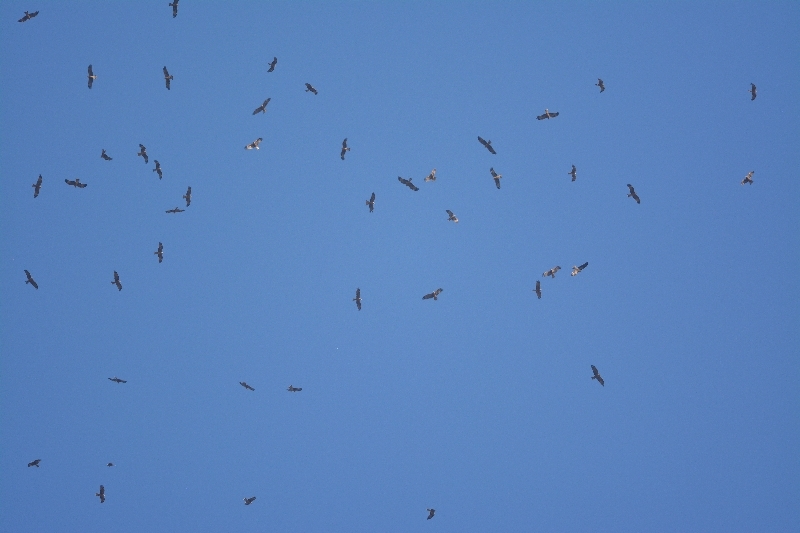 Back down to earth we scanned the pools and sand banks for waders gulls and terns but there was far too much human disturbance out there to expect much. A couple of flocks of Sanderling included Ringed Plover and Dunlin, a single Whimbrel and a very distant flock gulls was all we saw!A single Northern Wheatear sat on the edge of the beach and the grassy paddocks behind the beach held Short-toed Larks, Crested Larks, Yellow Wagtails, Common Stonechats, Goldfinches and Linnets but none of those were in big numbers. 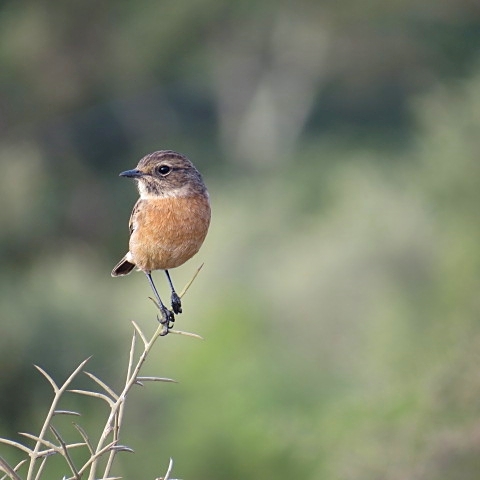 We next drove to Montonmedia Golf Complex near Vejer which is a favoured site of the reintroduced Bald Ibis, however our search for them proved friutless and niether did we find and passerine migrants. So we drove to Barbate passing the beautiful hill-top village of Vejer which is the area where the Bald Ibis breed.

​We stopped by the main bridge which spans the tidal Rio Barbate, luckily the tide was low with large areas of exposed mud where hundreds of birds were feeding. The heat-haze mad it difficult to see the birds well through our telescopes but we managed to identify most species. The majority of the birds were gulls, both Yellow-legged and Lesser Black-backed were joined by Black-headed Gulls, but there were also Caspian and Sandwich Terns, Grey Herons, Great Cormorants and Little Egrets. The waders included Eurasian Curlew, Whimbrel, Curlew Sandpiper, Dunlin, Sanderling, Grey Plover, Black-winged Stilts and Ringed Plovers. We were now sheltered from any breeze, the temperature was at its peak of around 35C and a few mosquitoes helped us to make up our minds to move on. 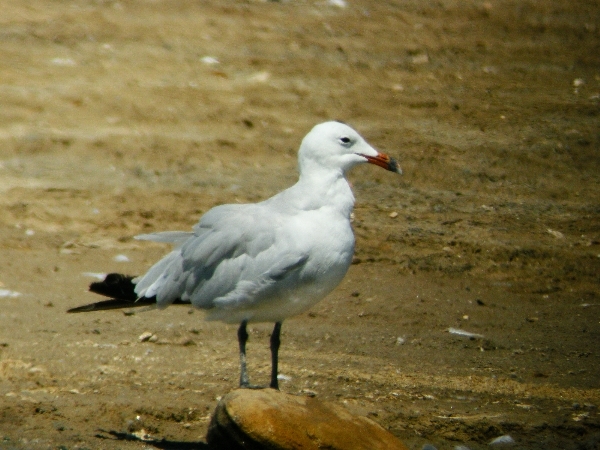 It was now 2pm and we still hadn't eaten our picnic lunch, so we drove round to Barbate Marshes to find a little shelter from the sun and it eat our lunch. We were delayed somewhat when we bumped into a flock of Bald Ibis, about 10 of them were laofing around in the small cattle paddocks near the marshes, one or two even stood on the telegraph poles! 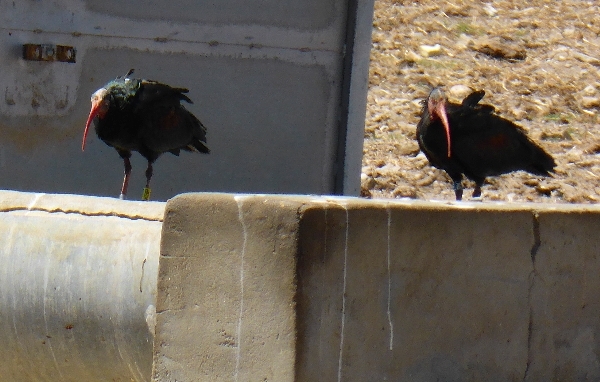 We eventually arrived at the marshes and were greeted by a panorama of thousands of birds sitting across the huge flat landscape of the open lagoons and purpose built island, it was an amazing sight. We counted over 400 Greater Flamingos, the gulls, including many Audouin's Gulls, numbered in theirs thousands, with small numbers of Grey Herons, Little Egrets, Eurasian Spoonbills, Black-winged Stilts and flocks of Sanderling.

It was now nearing 3pm when we ate our lunch as we watched a large number of Alpine Swifts flying over and swooping down to drink and despite a nice breeze it was still very hot. We drove further into the marsh noting even more Flamingos and Gulls and we watched several Northern Wheatears along a fencelune. We found a dozen or so of Stone Curlews on the islands, these birds breed here but their numbers are enhanced by migrating birds at this time, they will all move on soon. We saw a singl Osprey in the distance before we decided to leave for home. 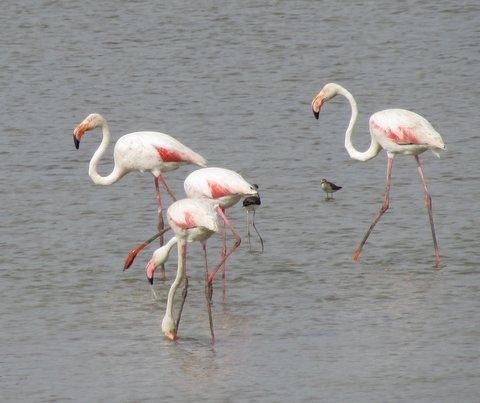 We made two stops on the way back, first at the Mirador de Estrecho where took a quick coffee whilst looking over the Strait of Gibraltar at Morocco and our second stop was near Soto Grande where we looked for White-rumped Swift. We dipped on the swift but enjoyed watching Barn and Red-rumped Swallows, House and Sand Martins, Common and Pallid Swifts, two more Sparrowhawks completed our sightings for the day.