An action packed day with many excellent sightings, some exciting migration passage and some great birding in the rice fields of La Janda.

We ate breakfast at 7am and left the hotel just before 8am, it was barely light as we arrived at Playa Los Lances, as soon as we were off the bus we were scoping flocks of Corn Buntings, Spotless & Common Starlings, Goldfinches and Cattle Egrets. A high 'spring' tide was ebbing as we arrived at the beach, much of the beach was flooded. Group of waders, gulls and terns produced some interesting sightings but nothing to get too excited about, Audouin's Gull was one of our best birds on the beach with dozen of Cory's Shearwaters, Northern Gannets and a few Balearic Shearwaters providing great interest off-shore. 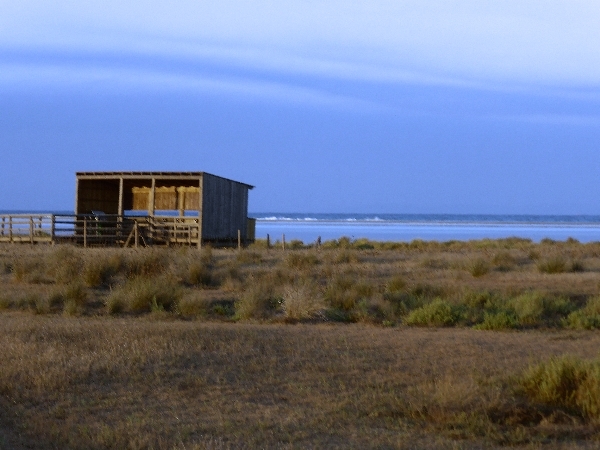 The grass paddocks behind the beach held Corn Buntings, Crested, Short-toed and Skylarks, Yellow Wagtails, Zitting Cisticola, Common Stonechat and not much else. We never saw a single raptor fly over us!

Our visit to El Trafico Observation Point was quite brief because not many birds were moving, we saw several Eurasian Sparrowhawks, one or two Booted Eagles and that was it. We could see several migrating raptors in the distance flying over Cazalla Observation Point so that is where we went to next. 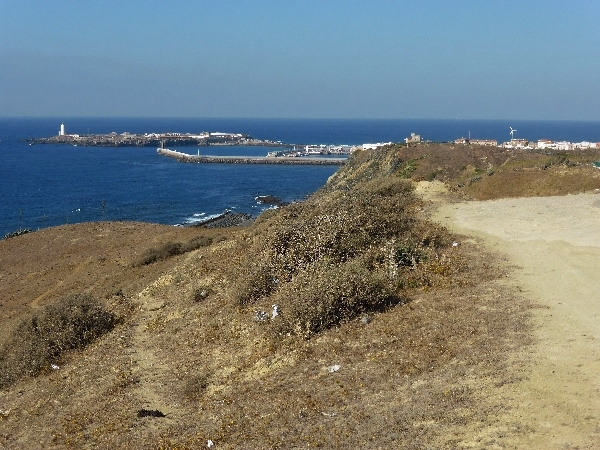 Looking from El Trafico to Tarifa Island and Port entrance

For the next two hours we were thrilled as many birds began to come up on the thermals, dozens of Booted Eagles, Short-toed Eagles and fewer Black Kites and Eurasian Sparrowhawks came right over us. A flock of some 40 Bee-eaters went over, drawing a cheer from the crowd of observing birders. We also saw a huge flock of Alpine Swifts, there must have been over 100, also a few Griffon Vultures and singles of Montagu's Harrier and Egyptian Vulture were the remainder of our sightings. 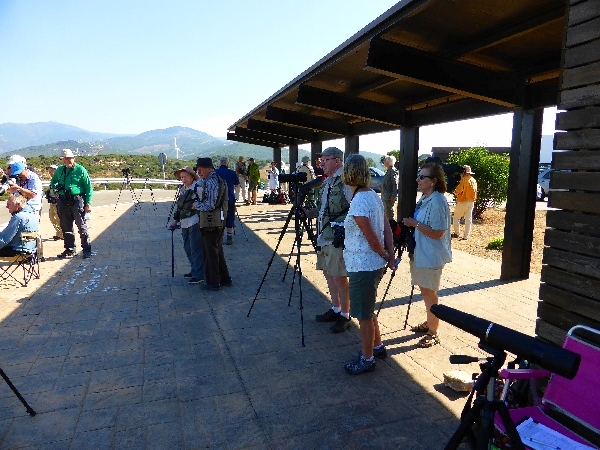 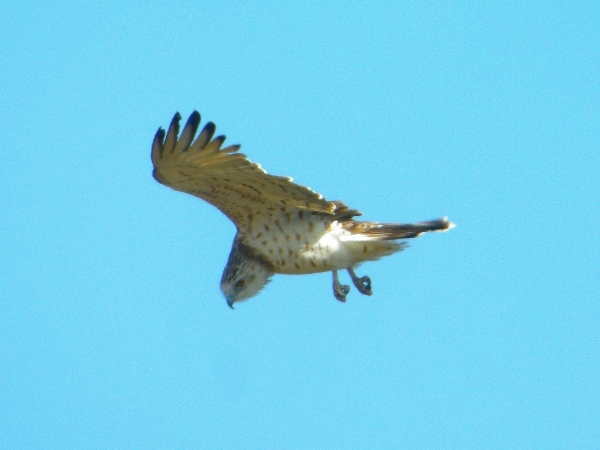 A Short-toed Eagle, hunting for snakes at Cazalla

Using the bus as a hide we were able to get good, close views of several species along the approach track to La Janda rice fields. Zitting Cisticola, Corn Bunting, Crested Lark, Cattle and Little Egrets, White Stork and Glossy Ibis showed very well. We parked at the beginning of the raised central track and ate our picnic lunch whilst observing first a Hen Harrier, then both Montagu's and Marsh Harriers, that was incedible, 3 harriers species in 15 minutes!

For the next 2 hours we crept along the central track recording many species, some of which were in huge numbers. Over 500 Glossy Ibis sat along one bank, probably more than a 1000 White Storks loafed in the rice fields and one most unexpected sighting was made of a single BALD IBIS!! I have never seen this species at La Janda before, it is not a marshland species, but there it was, sitting with its better-looking cousins, obviously lost and confused! 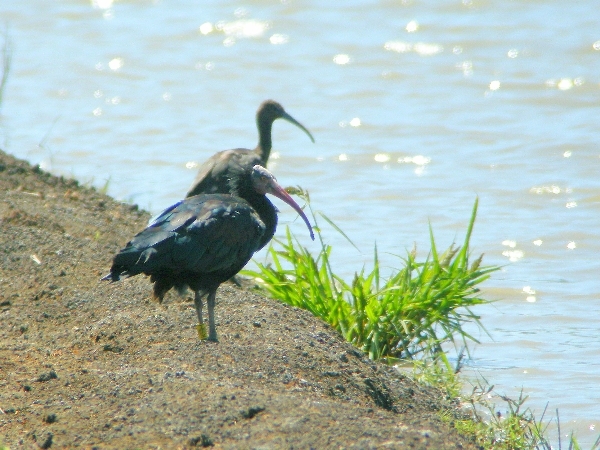 A Bald Ibis with a Glossy Ibis at La Janda

A good number of other species were found in one particular flooded field, we saw Green, Wood and Common Sandpipers, Common Snipe, Black-winged Stilts, Greater Flamingos, Mallards, Northern Shovelers, Eurasian Coots and lots more Cattle Egrets. Marsh and Montagu's Harriers were ever-present and huge flocks of Goldfinches, House and Spanish Sparrows and Wood Pigeons were constantly flying up from the large areas of sunflower fields which had just been harvested. 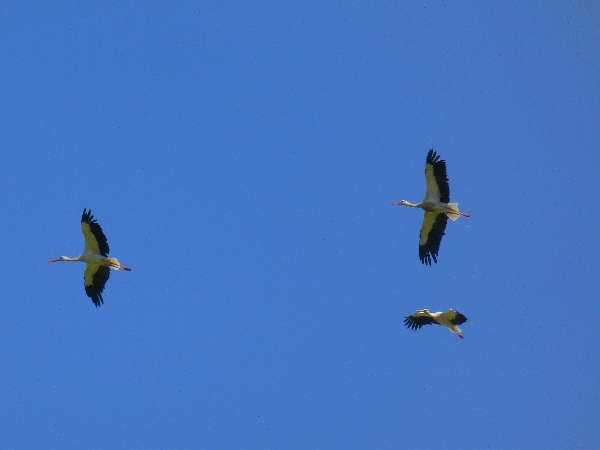 White Storks over us

We spent some time searching a known site for roosting Red-necked Nightjars, finding just one, a well-camouflaged individual sitting in the leaf litter. Next we drove onto the Benalup track and parked at a road junction where we had good views of a long wooded ridge where recent sightings of  Spanish Imperial Eagles had been made. As we pulled up at the roadside we inadvertently flushed two Purple Herons, both of which settled in view not too far away. 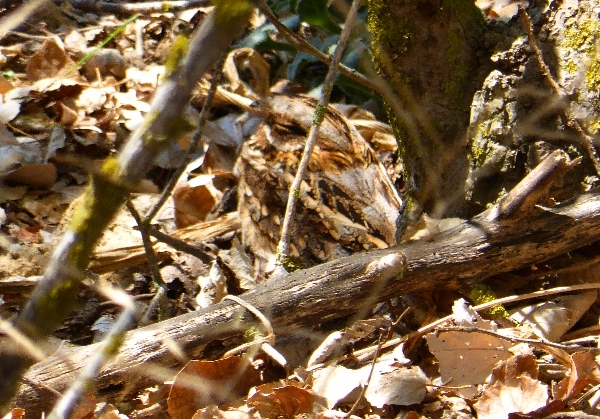 Our eagle watch produced Buzzards, Booted Eagles, Common Kestrels,  hundreds of soaring Storks and hundreds of hirundines, namely Barn and Red-rumped Swallows, Sand and House Martins, the late afternoon light was superb for this kind of birding and the temperature was just right around 25C with no cloud and a lovely breeze, perfect! But I had to drag my group away around 5pm without seeing anything 'Imperial'. 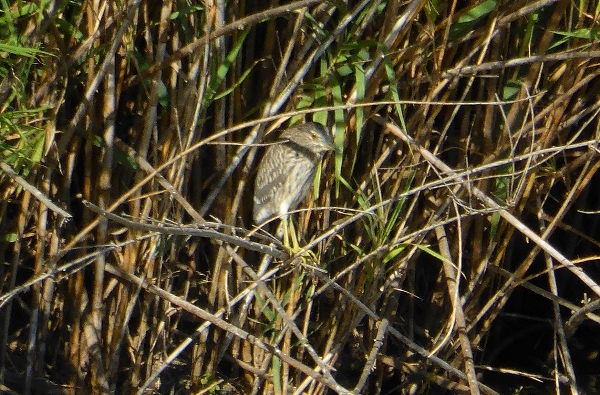 We added several of species to the trip list during our journey to and from the Benalup track, these included Red-legged Partridge, Common Pheasant, Woodchat Shrike, Turtle Dove, Lesser Kestrel (a count of 10 feeding over one field),  and back in La Janda we found Black-crowned Night Herons and half a dozen Eurasian Spoonbills.

It had been a fantastic day out which was concluded with a lovely sea-food dinner and a nice chilled bottle of wine.